On April 13, the website of the Russian Ministry of Defense reported [1] that the ships of the Caspian flotilla proceeded along the Don River into the Sea of ​​Azov. The press release referred to the transfer of 15 ships, including 3 artillery boats and 8 landing craft, as well as support vessels.

Pavlo Lakiychuk, [2] head of security programs at the Center for Global Studies Strategy XXI, provided his own expert assessment of the reality of military threats of the following maneuvers:

“The very fact of temporary redeployment of military boats from the Caspian Sea is not surprising. Since 2016, having taken full control of the Sea of ​​Azov, the Russians have been working to strengthen the grouping of forces there and in the Kerch Strait, including through utilizing the ships of the Caspian flotilla.

Two ways of transferring boats from the Caspian Sea to Azov have been developed: the “Southern route” – from Makhachkala to Rostov on railway platforms, and the “Northern route” – by inland waterways from Astrakhan through the Volga – Volga-Don Canal – Don and further to the Sea of ​​Azov. The second option is preferred because it can direct not only small boats but also small ships of the Corvette class. In particular, in 2016, two Buyan class small missile ships of the Caspian flotilla, Serpukhov and Zeleny Dol, proceeded through the Volga-Don Canal to the Sea of Azov and the Black Sea and further to the Mediterranean, from where they fired the Caliber missiles at Syria. Later, in 2018, a similar campaign was carried out by the Caspian small missile ships Grad Sviyazhsk and Veliky Ustyug.

During the escalation of the Azov crisis in May 2018, without much publicity, a group of three artillery boats – two river-class armored boats Shmel 1204 – AK-201 and AK- 248 and a high-speed Grif 1400M AK-326 boats, came to Kerch through the Volga-Don Canal. Along with them, the raft diving boat RVK-933 and the raid tug RB-410 came to the Sea of Azov using the inland river route. At that time, the redeployment of boats from the Caspian Sea to the Sea of Azov was explained by planned combat training but they returned to Astrakhan only in late autumn when the hostilities involving the capture of two Ukrainian boats in the Kerch Strait subsided. 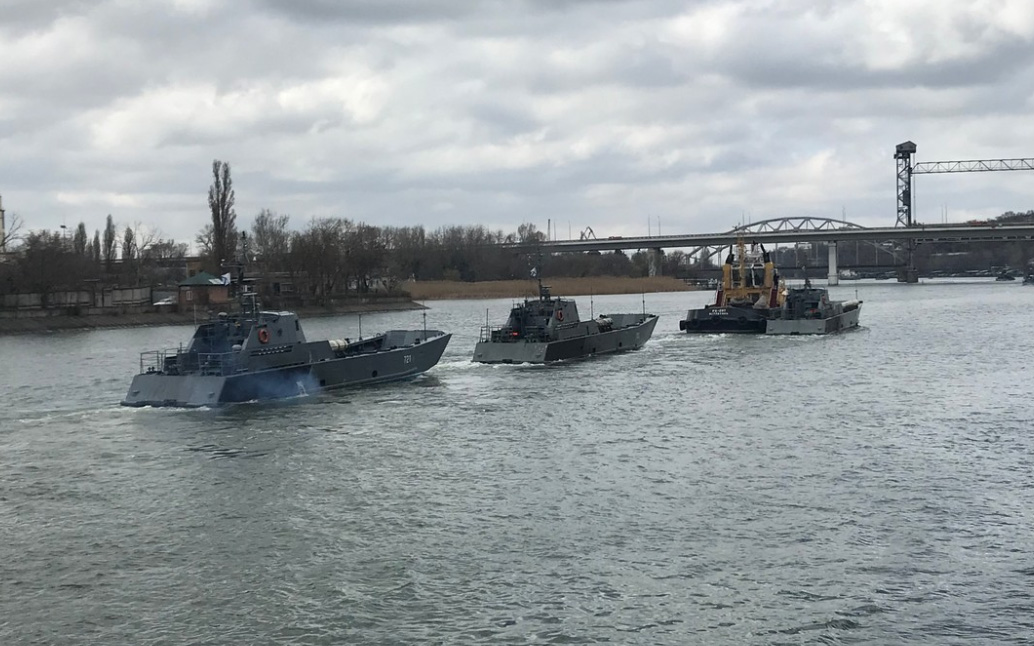 Immediately after the media report, it became clear that the Russians had sent landing squadron boats to Azov – the so-called DESO with fire support ships (OKOP – a detachment of fire support ships / boats). The 242nd Regiment of Landing Boats and the 327th Regiment of Artillery Ships regularly carry out such tasks in the Caspian Sea. And it turned out they were intended for similar tasks. Later, it became known that all combat ready landing craft of the Serna 11770 class and all Shmel class artillery boats at the disposal of the Caspian flotilla, as well as the GS-559 hydrographic vessel, were transferred to the Sea of Azov. 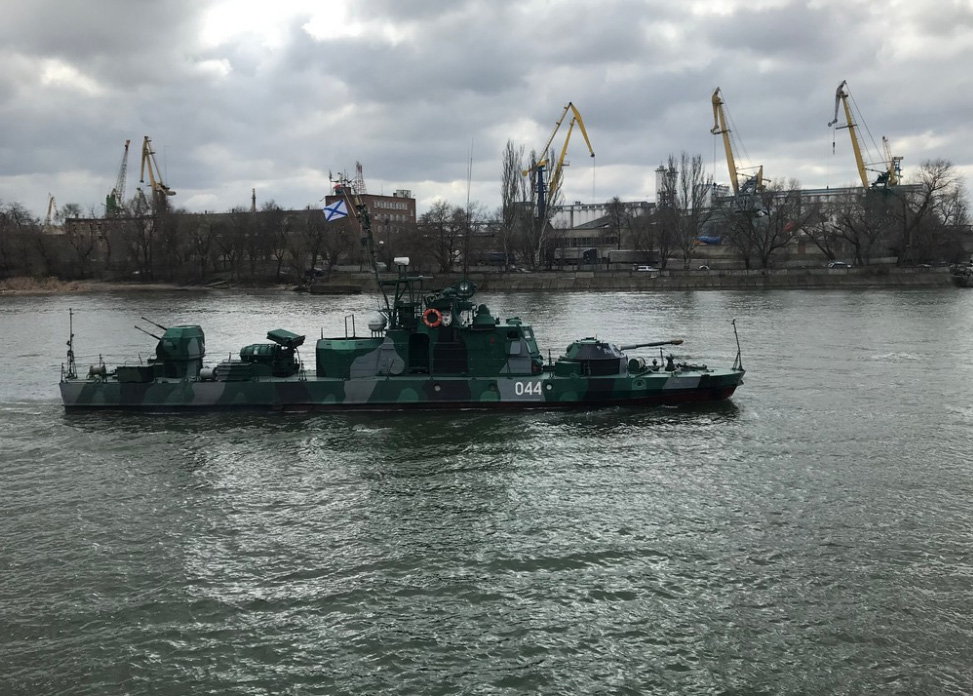 They can carry out company tactical landings (for example, for the 382nd Separate Marine Battalion based in Temryuk) on the unequipped coast in the shallow areas of the Sea of ​​Azov and Lake Sivash. This cannot be done by the large landing ships of the Black Sea Fleet of the 1171 and 775 classes – they are too large with a large draft. It should also be borne in mind that recently the Black Sea Fleet has acquired two Serna boats based in Novorossiysk and a couple of assault boats of the BK-16 class (project 02510), thus doubling the landing capabilities of the Russians in the Sea of ​​Azov.

What is a company tactical landing?

These are not the main forces of the offensive. This is a tactical type of combat to capture a strategically important bridgehead in the rear or on the flank of the enemy and to retain it until the arrival of the main forces. So, although the Caspian boats pose a threat, the main danger should be expected from another direction.

What can we do?

Ukraine cannot prevent their operations at sea in any way that will not be declared a “provocation” by the Russians: the notorious Agreement between Ukraine and the Russian Federation on Cooperation in the Use of the Sea of ​​Azov and the Kerch Strait of 2003, which defines Azov as “common inland waters” (which is a nonsense in itself) is still in force. Based on it, the Russians consider themselves masters in The Sea of Azov. The Ukrainian forces in the Sea of Azov are too small.

However, if necessary, four Gurza Ukrainian boats based in the East naval base, with a proper support by the Coast Guard boats, are capable of fighting back.

The main task is to strengthen anti-landing defense: to restore after the winter anti-landing infrastructure of the coastal areas where enemy’s forces can land and to increase the mobile forces of the coastal defense. It is important to conduct constant monitoring of the waters and to monitor the actions of the enemy. Our sailors know all of it and can do it. It is always easier to prevent a landing from the sea than to attack – this is a classic. Ukrainian servicemen annually conduct large scale live-fire military exercises on the coast of the Sea of ​​Azov code-named the Tail Wind. Recently, large-scale exercises to repel the offensive, including from the sea, were conducted near occupied Crimea. Our coastal artillery and paratroopers continue their training.”

Let us remind you that in March 2021, InformNapalm published a comprehensive information and analytical review [5] prepared by Pavlo Lakiychuk. It assessed the scale of the militarization of Crimea. InformNapalm international volunteer community published and distributed this review in 12 languages. 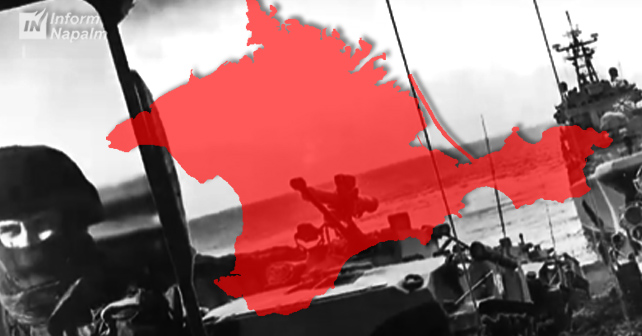 [15]Translated by Svetlana Kemblowski, edited by Artem Velichko. Distribution and reprint with reference to the source is welcome! InformNapalm materials are available under a public license Creative Commons Attribution, CC BY [16]. The condition for using our materials is a hyperlink to the original source in the first or second paragraph of your publication. InformNapalm social media pages:

[19]InformNapalm [20] does not receive any financial support from any country’s government or large donors. InformNapalm.org website is supported solely by the community volunteers and our readers. You can also volunteer or support the development of the unique volunteer intelligence resource InformNapalm with your donations through Patreon [21].