Based on the results of a recent OSINT investigation, we would like to present new facts of the Russian military units’ participation in the conflict in Donbas (the biggest database with investigation results can be found here [1]). This article contains the information regarding the ‘Ukrainian assignments’ of the 18th separate motorized rifle brigade (military unit No. 27777, 58th general military army, Southern Military District, Khankala and Kalinovskaya villages, Republic of Chechnya, Russia). In particular, here are evidence of three trips to Donbas of a serviceman from the mentioned military unit that has been in the field of our interest for several times already.

Roman Leonidovich Rever is registered on VKontakte social network as Roman Revera [2] (profile archive [3], photo album archive [4], contacts archive [5]), and as revejra [6] (archive [7]) on Instagram. Judging by his posts and pictures, Roman was born on April 18, 1991 in Vladikavkaz, North Ossetia. He served in the internal troops of the Russian Ministry for Internal Affairs.

Starting from 2014 R. Rever served in the 18th brigade located in Chechnya. At first, in 2014, he served in 2S3 ‘Akatsiya’ self-propelled gun artillery division. In 2015 he moved to the reconnaissance battalion of the same brigade. As it is known, there are plenty of vacancies in this battalion of the 18th brigade, since lots of contract servicemen break their contracts after returning from Donbas. Those who were killed in Ukraine are not recognized as the ones who served here, as it happened to Denis Husainov [11] who was retrospectively dismissed [12] as a ‘LPR’ fighter. This story was thoroughly described in the ‘Putin’s Eleven’ — Selfie Soldiers of 18th Russian Motorized Rifles Brigade in Donbas’ [12] article from July. 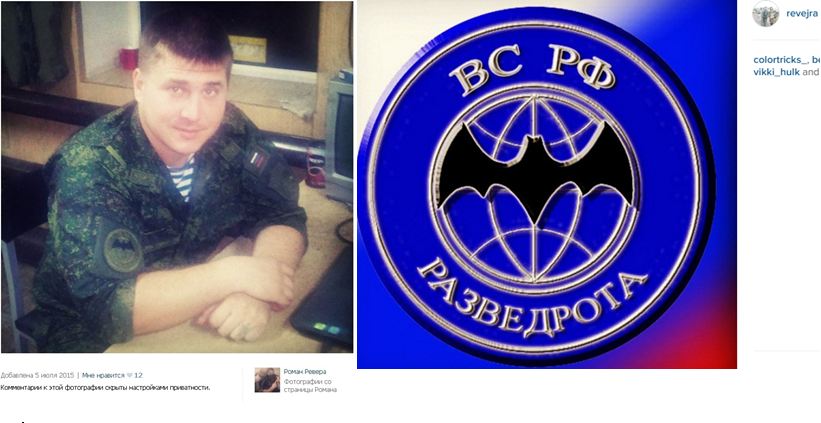 The first trip of Roman Rever took place in the summer and fall of 2014 during the peak of combat actions’ escalation in Donbas. At that time the Russian military machine saw how the Ukrainian soldiers overturn the situation and the Russian puppets began to cede their positions. Thus, Russia embarked on hostilities and started shelling the Ukrainian armed forces near the border areas, also numerous Russian tactical groups entered Donbas. 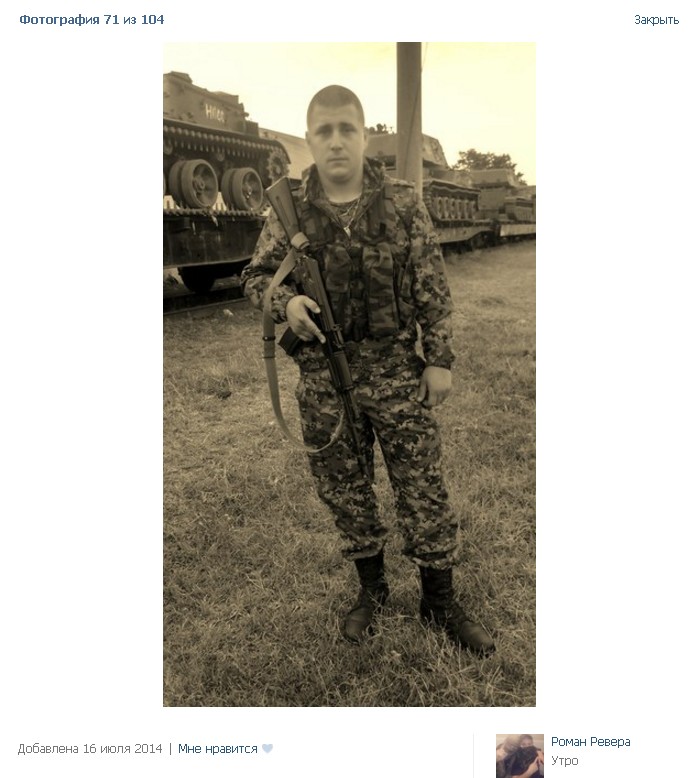 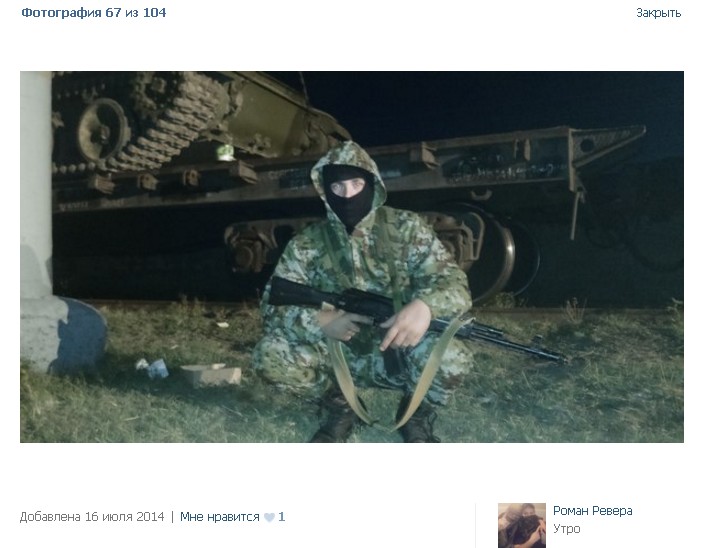 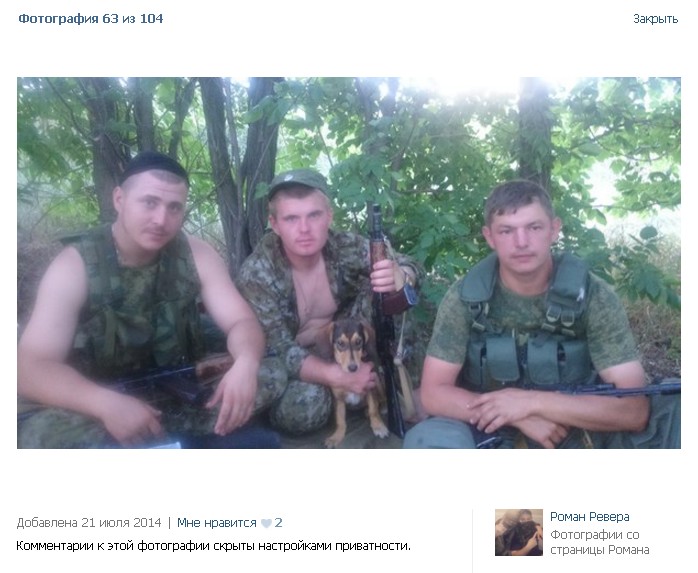 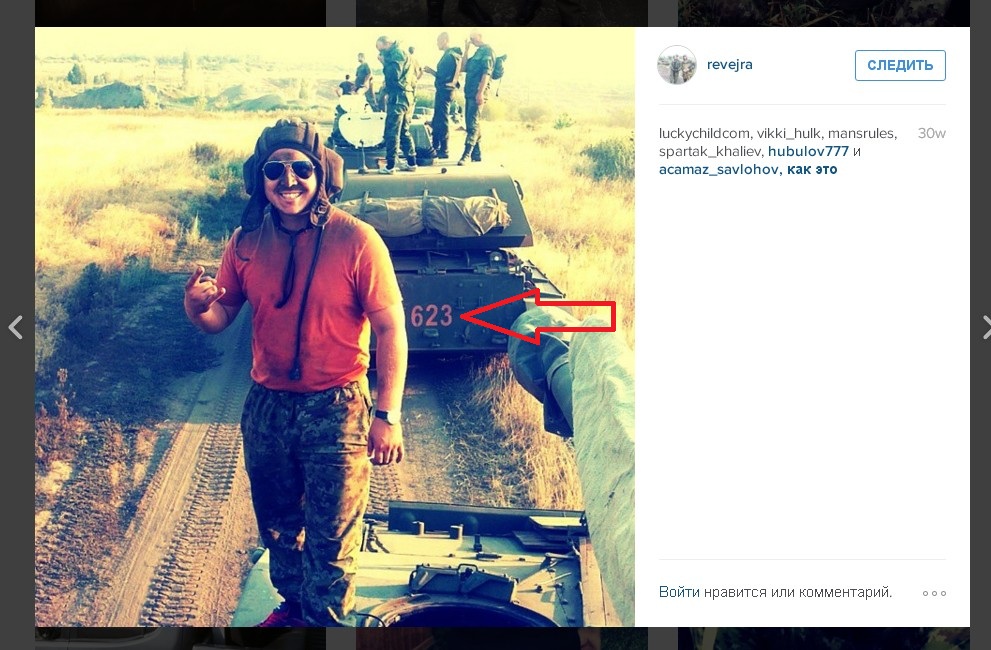 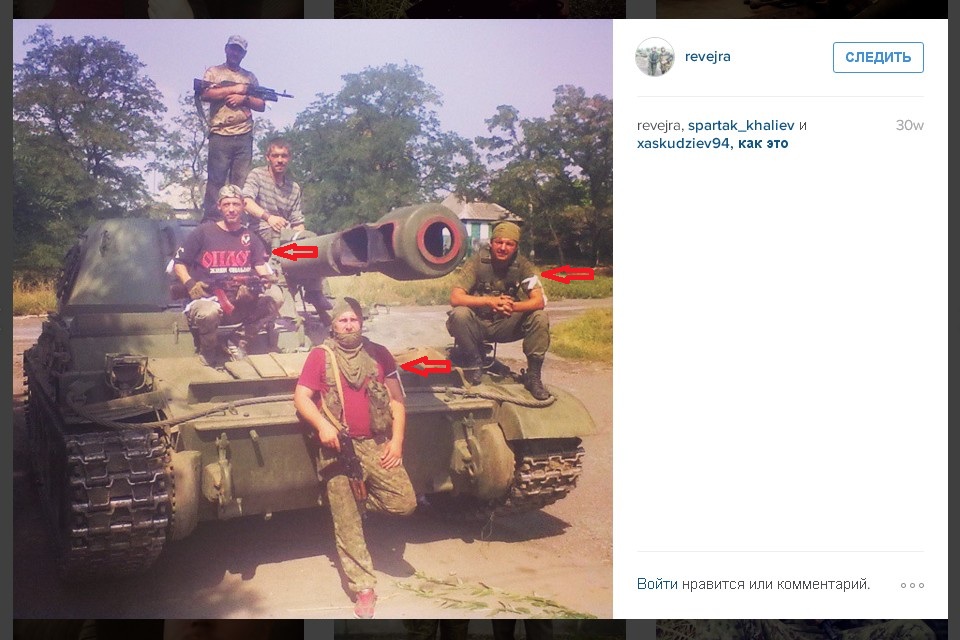 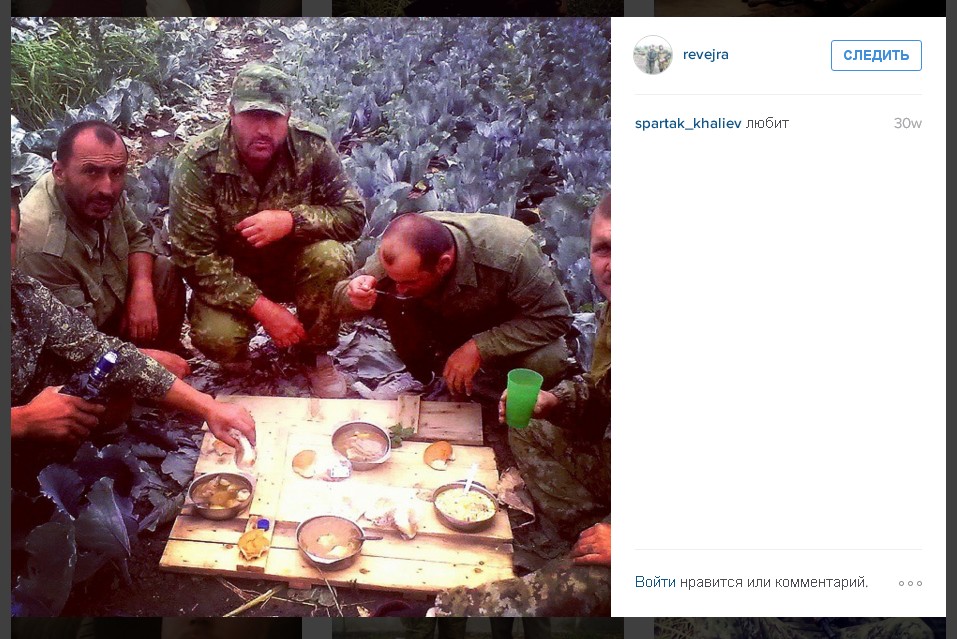 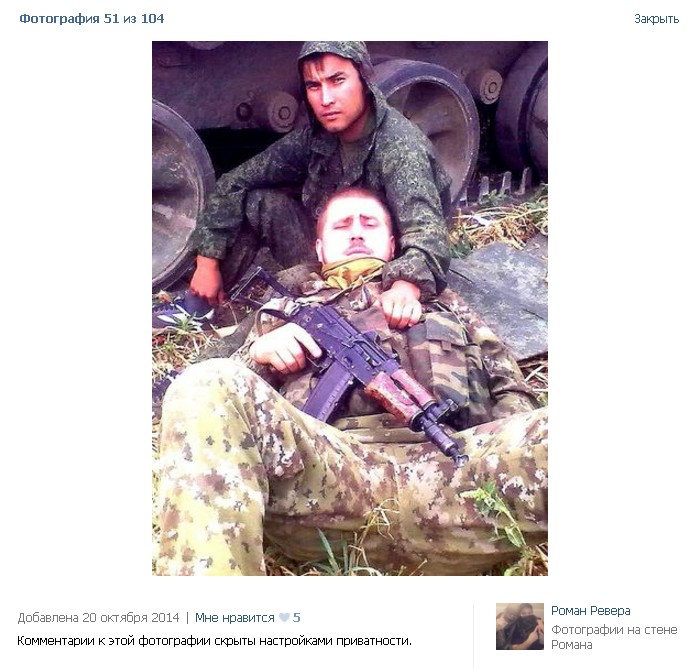 Note: Among the pictures shown above we highlight a slide with 2S3 ‘Akatsiya’ self-propelled gun column on march, in particular, the gun with side number ‘red 623’. We demonstrated several T-72B tanks with red side numbers which belonged to the 18th brigade in the ‘Putin’s Eleven’ — Selfie Soldiers of 18th Russian Motorized Rifles Brigade in Donbas’ [12] article from July. The red three digits side numbers on tanks, self-propelled guns and other vehicles were used by the 18th brigade. As the confirmation of this we show the slides from the ‘twower’ Russian blog from October 14, 2011 [21], where numerous pictures of vehicles belonging to this military unit and marked with red three digits side numbers can be found. We discovered that T-72B tanks and part of 2S3 guns (replaced by T-72 B3 and 2S19 ‘Msta’ guns during the brigade’s rearmament) were moved to equipment storage bases in Krasnodar krai in 2014. Taking into account all the mentioned above, we can assume that the ‘removed from use’ tanks and self-propelled guns were deliberately and beforehand transported closer to Ukraine to be used later in Donbas. 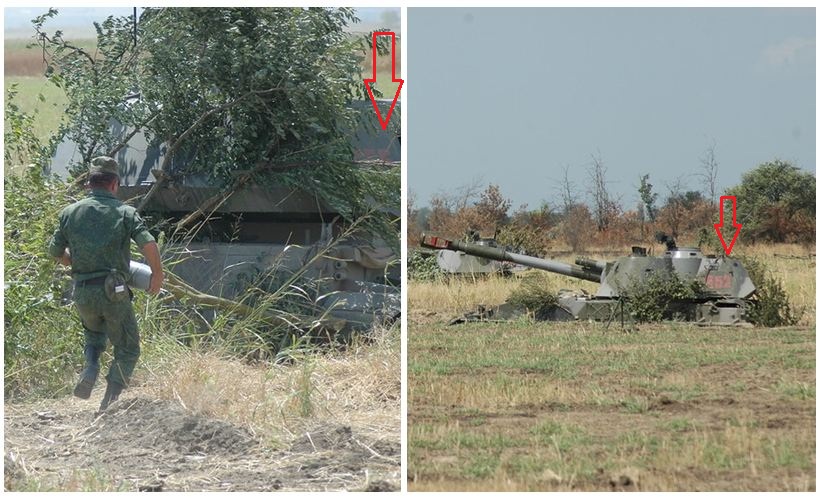 The second trip by Roman Rever took place after a five-month break, which lasted from November 2014 till March 2015. Apparently, Rever got bored from the duties and living in the Chechen garrison and gained a chance to draw a triple salary in the status of a ‘volunteer’-scout during another escalation of the conflict in Donbas near Debaltseve when the Russian military authorities used the tactical groups from Rostov Oblast to overturn the situation in favor of Russia. As a result of his second trip, Rever was awarded with ‘Marshall Zhukov’ consolation medal according to the order of the commander of the 18th brigade dated on February 17, 2015. 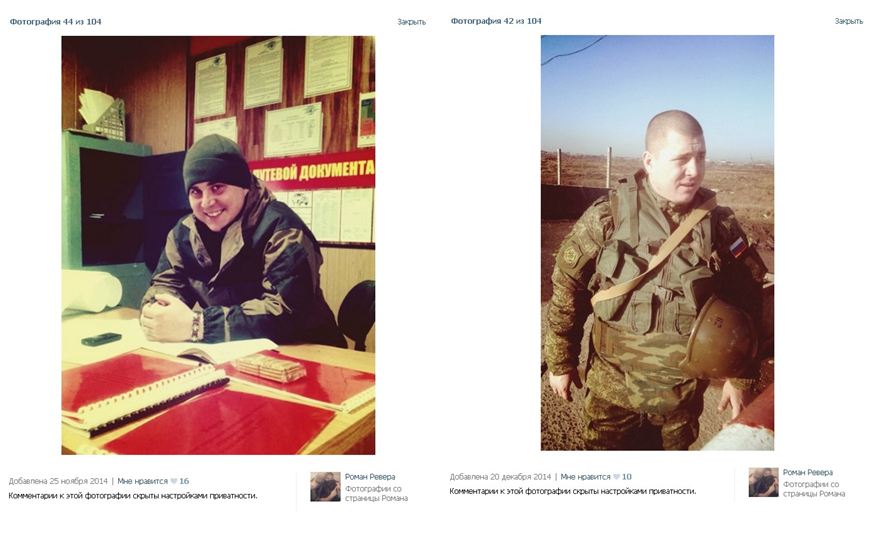 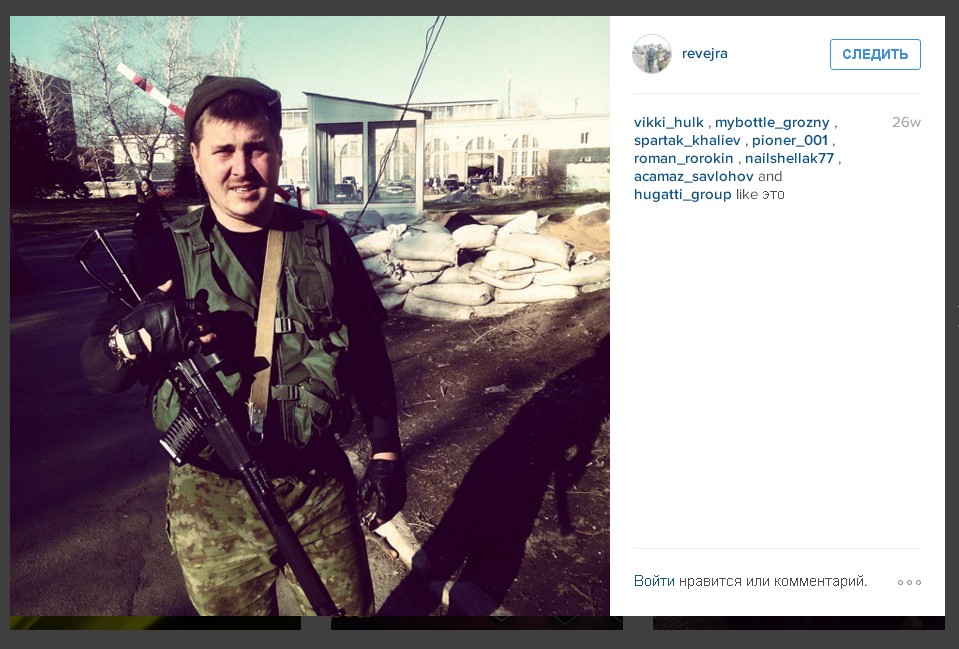 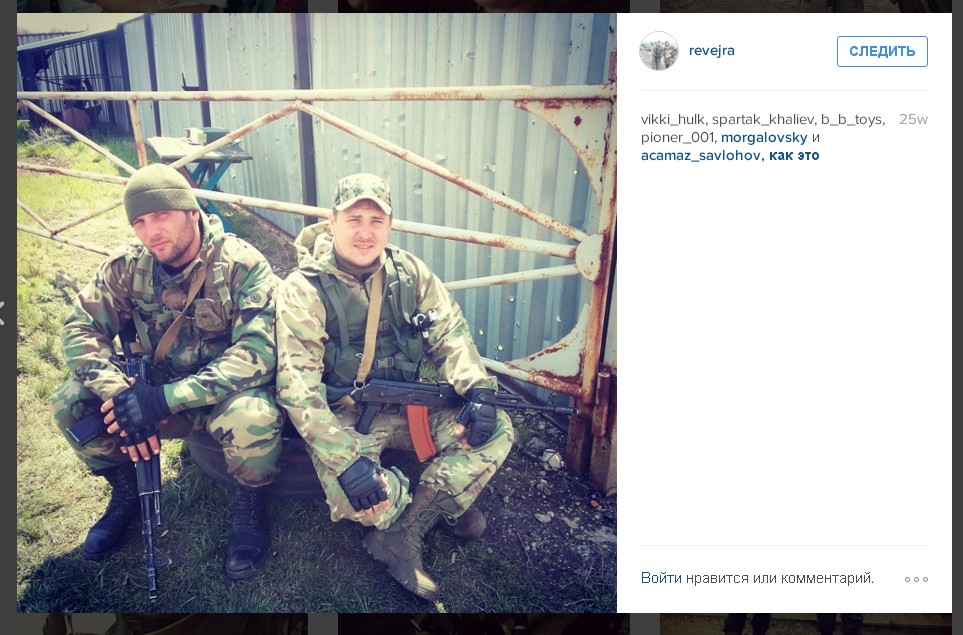 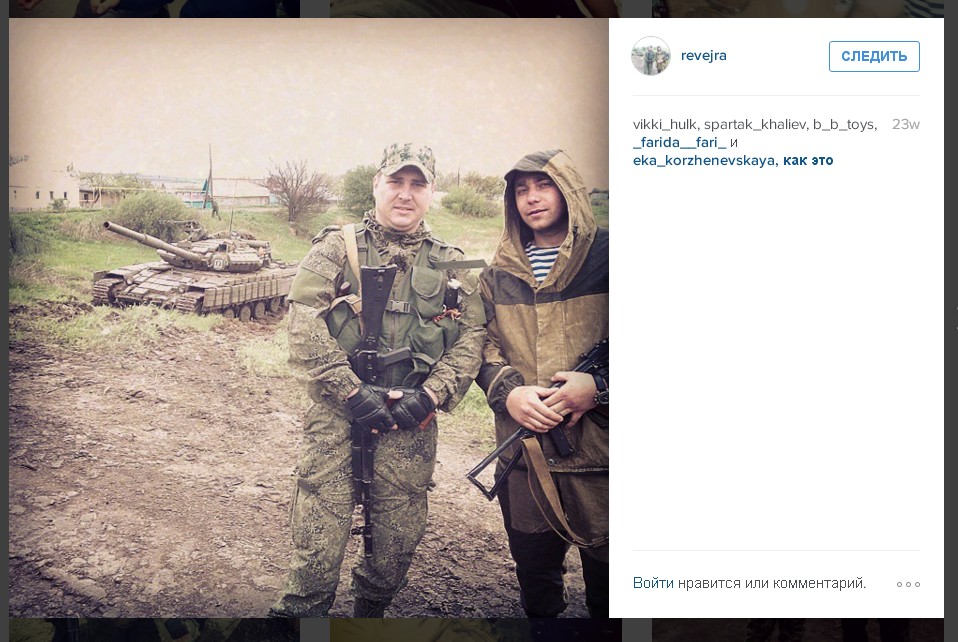 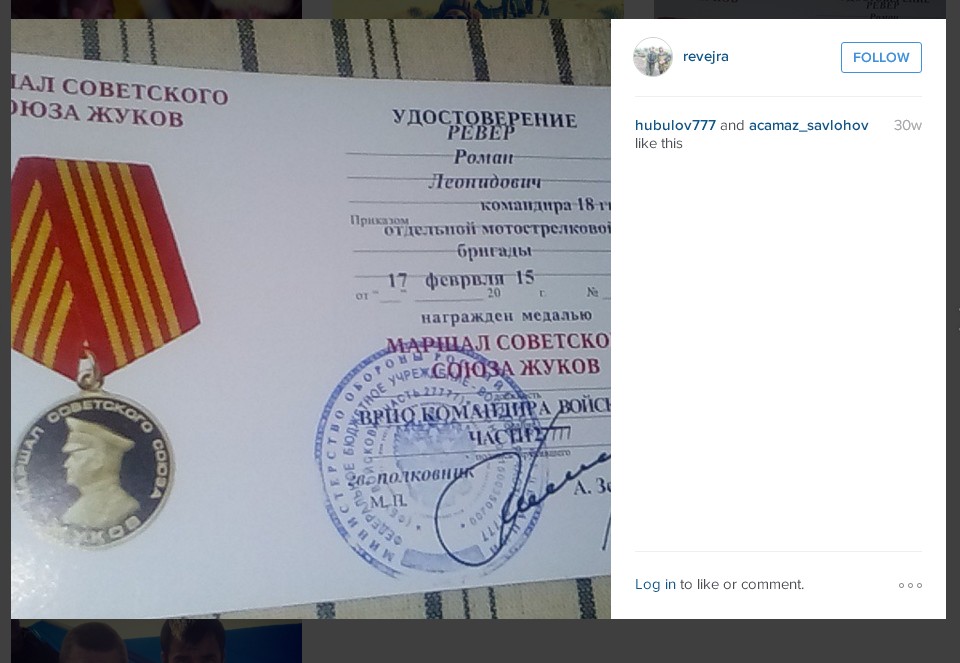 In May of 2015 Rever came back from Donbas and went to rest by the sea and then to his native city of Vladikavkaz. Having rested, he returned to garrison living in the 18th brigade in Chechnya, but it did not last long, only a couple of months.

Roman Rever’s thirt trip happened in August 2015, when another combined unit of the 18th brigade moved to Donbas and soon was turned [35] into the “People’s Militia of Novorossiya”. Last pictures uploaded to Instagram had geotags “Krasny Luch’s police department” and “Horlivka medical school”. 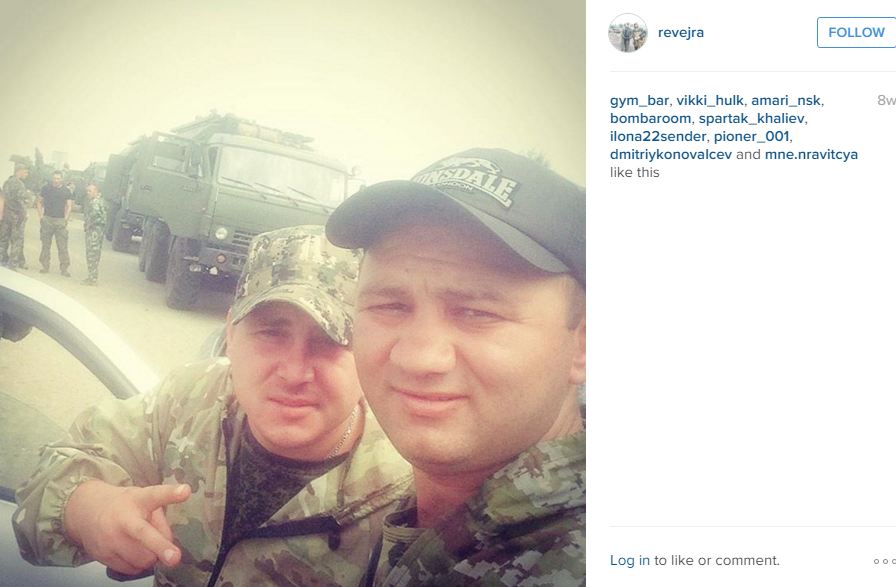 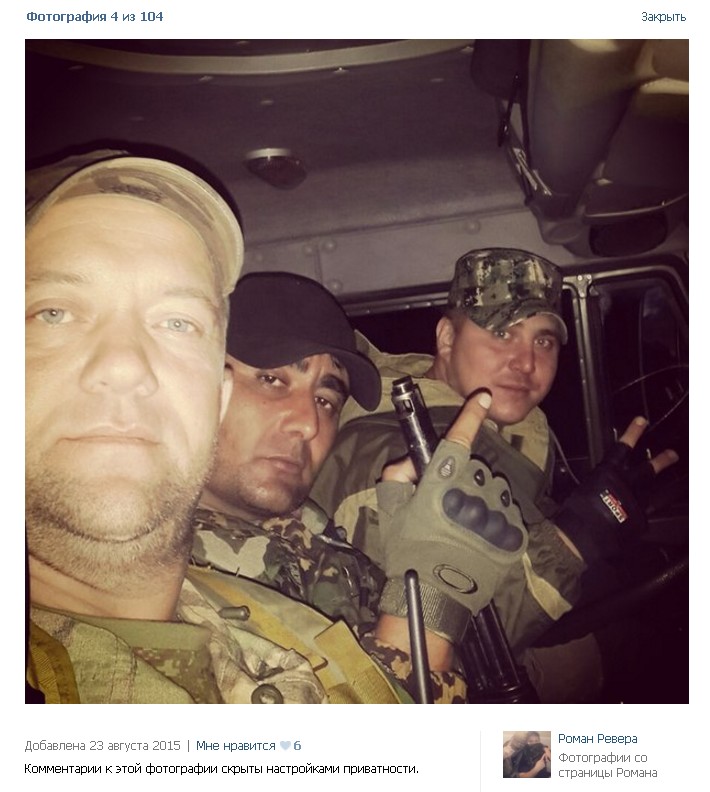 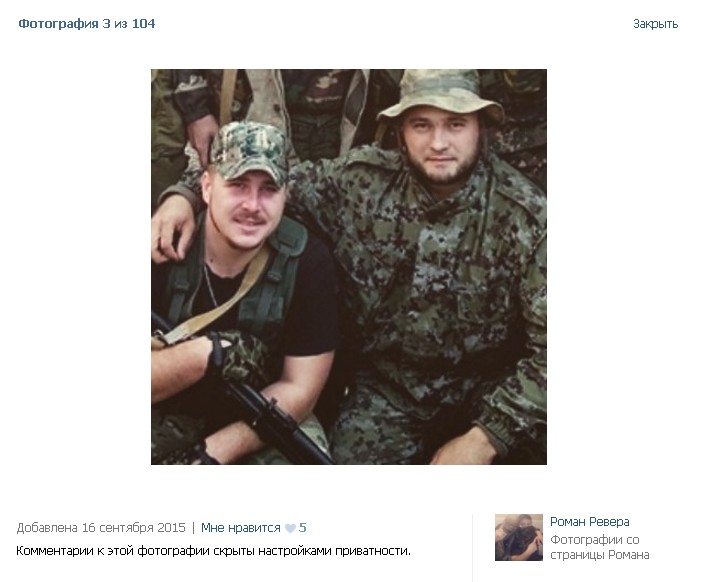 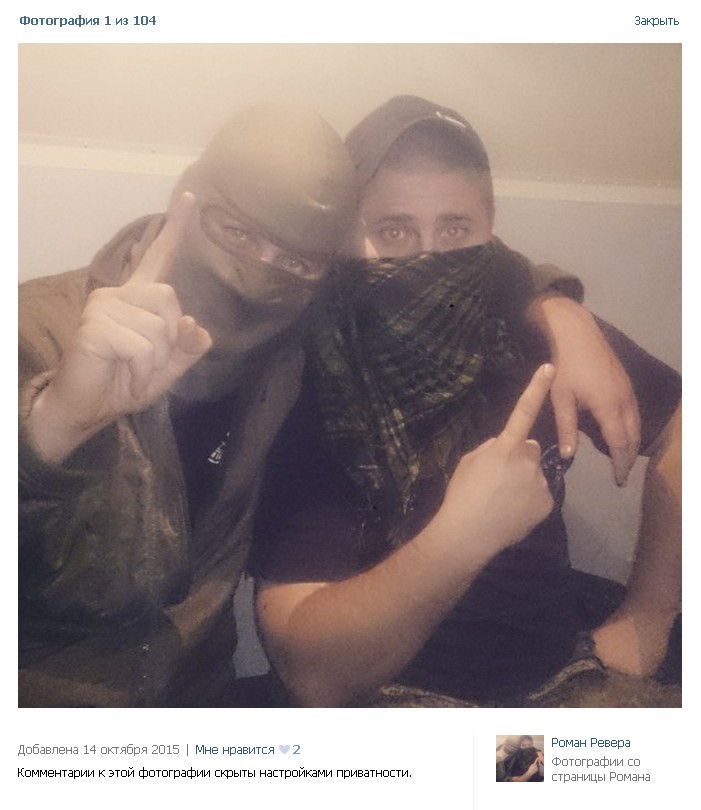 We should highlight the following points from Rever’s photos and contacts: 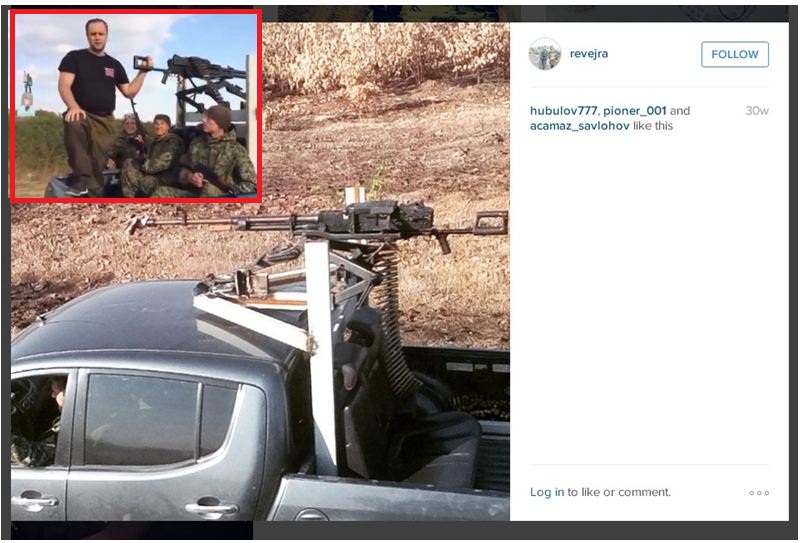 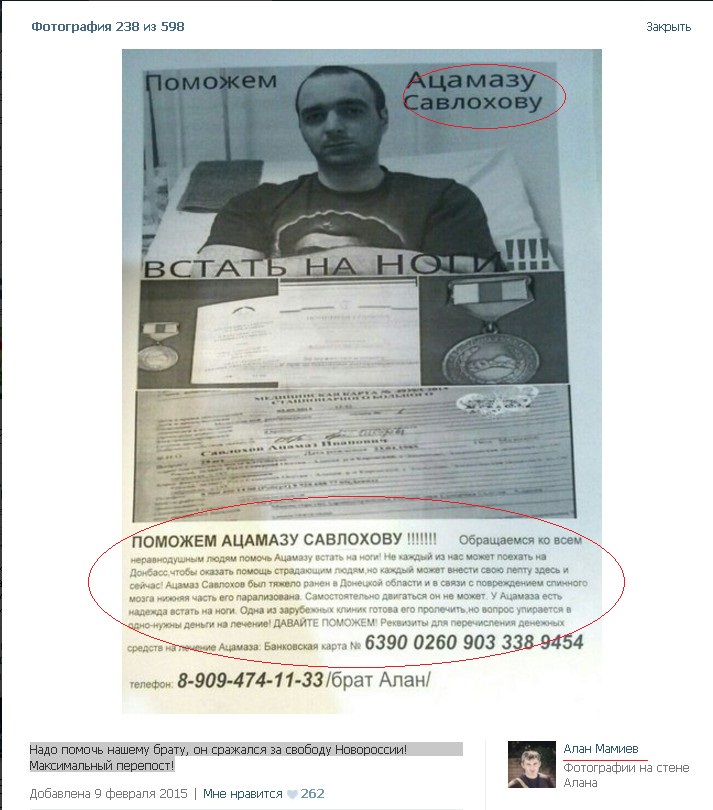 To summarize the current investigation, we wish to highlight that Roman Rever managed to find a girlfriend in Donetsk – Ilona Sender [47], this also justifies his current location. 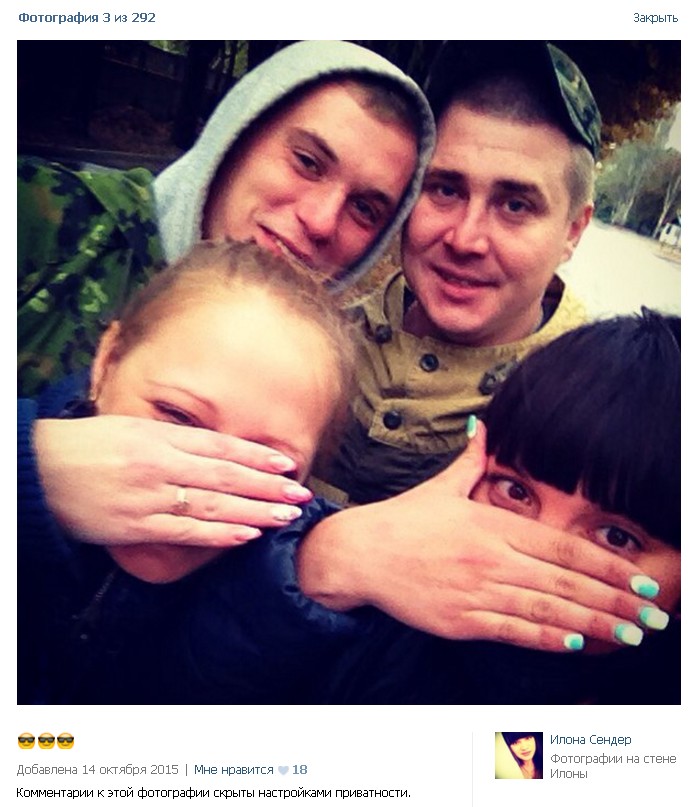 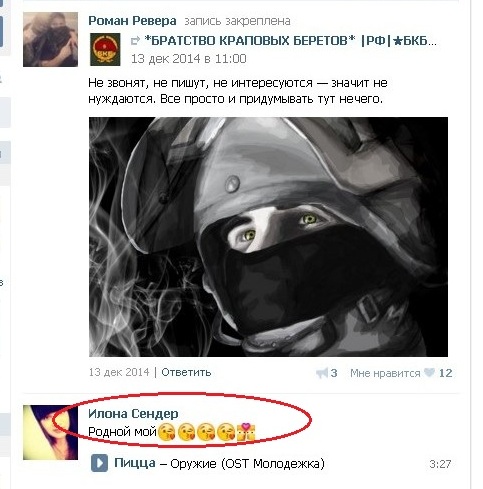 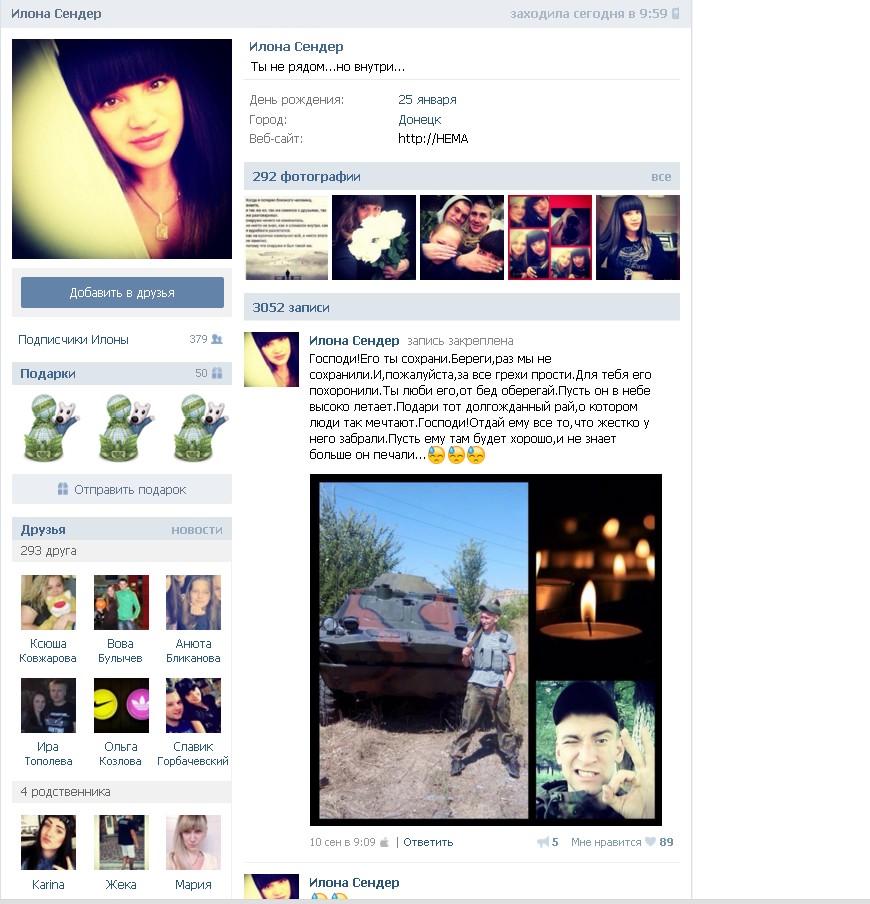 For reference: The 18th separate motorized rifle brigade was formed in the end of 2008 from the units of former 42nd motorized rifle division located in Chechen settlements of Khankala and Kalinovskaya as a result of the Russian Federation’s military forces’ reformation. This military unit is one of the most battle-ready units of Russia. The brigade was completely reequiped and rearmed with new and modernized vehicles and weaponry. The 18th brigade also has a so-called ‘national battalion’ formed by the North Caucasian native residents, mainly former militants that were amnestied and later served in units of Kadyrov and Yamadayev. Parts of this brigade took part in the Russian aggression against Georgia in August of 2008. The units from the 18th brigade including its Chechen battalion were mentioned many times in the context of the ‘Ukrainian assignments’ – please refer to these articles: