This material was prepared for the readers of the InformNapalm volunteer intelligence community website by Yevhen Hriniov, a participant in the Russian-Ukrainian war.

On January 6, 2022, a military contingent from the CSTO rapid response forces was deployed to the Republic of Kazakhstan. According to InformNapalm, the Russian part of the task force included Russian units that participated in the aggression against Ukraine [1].

The task force supporting the intrastate coup in Kazakhstan, committed by Kassym-Jomart Tokayev, included the military units of the Russian Federation, Belarus, Armenia, Tajikistan and the Kyrgyz Republic.

The total strength of the CSTO military contingent in Kazakhstan is still unknown; however it could be estimated at around 3000 men. The core of the task force is made up of the Airborne Forces of the Russian Federation (in various sources, their number has been announced from 2500 to 3600 people). Note that this is approximately equal to the strength of an air-assault brigade of the Russian Army.

According to the Russian Ministry of Defense, a total of seventy Il-76 [2] and several An-124 transport aircraft were involved in the airlift operation.

Probably, the aircraft from Pskov, Tver, Orenburg, Seshcha, Ivanovo, Ulyanovsk and Taganrog were used. Note that 70 planes approximately make the number of all fully operational Il-76’s in the Russian Federation. It is about the number of aircraft that, according to the Russian Ministry of Defense, was involved in the deployment of “peacekeepers” in the part of Karabakh that remained under the control of Armenia after the victory of Azerbaijan in the fall of 2020 (60 aircraft). Back then, these airlifters also had to carry an approximate set of equipment of one brigade and about 2,000 men [3] .

We are interested in the capabilities of the Russian Army for a prompt airlift and deployment of a rapid deployment force in live operational environment.

Let us try to make an estimation based on the standards [5] for pre-flight handling and checks of the Il-76 type aircraft and the time frames according to 1996 standards of the Russian Airborne Forces for loading and unloading a paratrooper platoon.

We understand that it is an approximate estimation and the available information is incomplete, but we are quite capable of outlining the time and technical parameters with satisfactory tolerance acceptable for military planning.

The calculation will be made for the case of air landing operations (the probability of an airdrop assault [6] with large units is close to zero in modern combat conditions), and for a typical load of 3 BMD fighting vehicles or BTR-D armored personnel carriers per each Il-76 transport aircraft (theoretically, loading up to 4 fighting vehicles is allowed, but no real cases have been recorded to date).

For all loading stages, we adopt “satisfactory” compliance with standards, as it is practically unrealistic to perform better in case of massive airlift effort by a joint air group.

In total, the maximum acceptable time for loading a paratrooper platoon with armored vehicles can be 2 hours and 20 minutes.

Let us assume the flight duration of 3 hours.

The time to unload the equipment and make it combat-ready should be up to 1 hour.

Thus, the full cycle of transportation of 1 airborne platoon with equipment on an Il-76 aircraft is 6 hours and 20 minutes (let us introduce the term “block hour” for further use).

Additionally, we must take into account the pre-flight checks and ground handling of an aircraft, which is approximately 2 hours (depending on the airfield, weather conditions, the need to replace the crew, the need to check particular components, etc. According to the standards, it is from 97 to 322 minutes), as well as the ferry flight, which also requires pre-flight preparations. In total, the approximate time is 7 hours.

Thus, the transportation of one platoon requires at least 13 block hours.

Accordingly, at least 39 block hours are required to transport a company with materiel.

To simplify the calculation and taking into account the absence of accurate information about the numbers of the “peacekeeping” contingent, we assume that up to 15 companies (up to 1,500 people) with standard armored vehicles will be involved. Brigade support units (command, reconnaissance, communications, electronic warfare, technical support, etc.) constitute approximately the same numbers. The 1/1 ratio of combat and support units is generally accepted for rapid deployment operations.

Thus, the transportation of these forces requires approximately 1170 block hours.

It can be counter-argued that this assumption is made on an airlift operation carried out without interruption, with no regard given to the return ferry flights and pre-flight checks of the aircraft. And, given our lack of information, the operational readiness of the involved airlifters is also taken as 100%, which is unattainable in live conditions. We also assume that there are replacement crews for round-the-clock operation of the aircraft, and the weather conditions are constantly favorable. Yet, the available photos prove the long ground time of the fleet, at least in the airports of Kazakhstan. 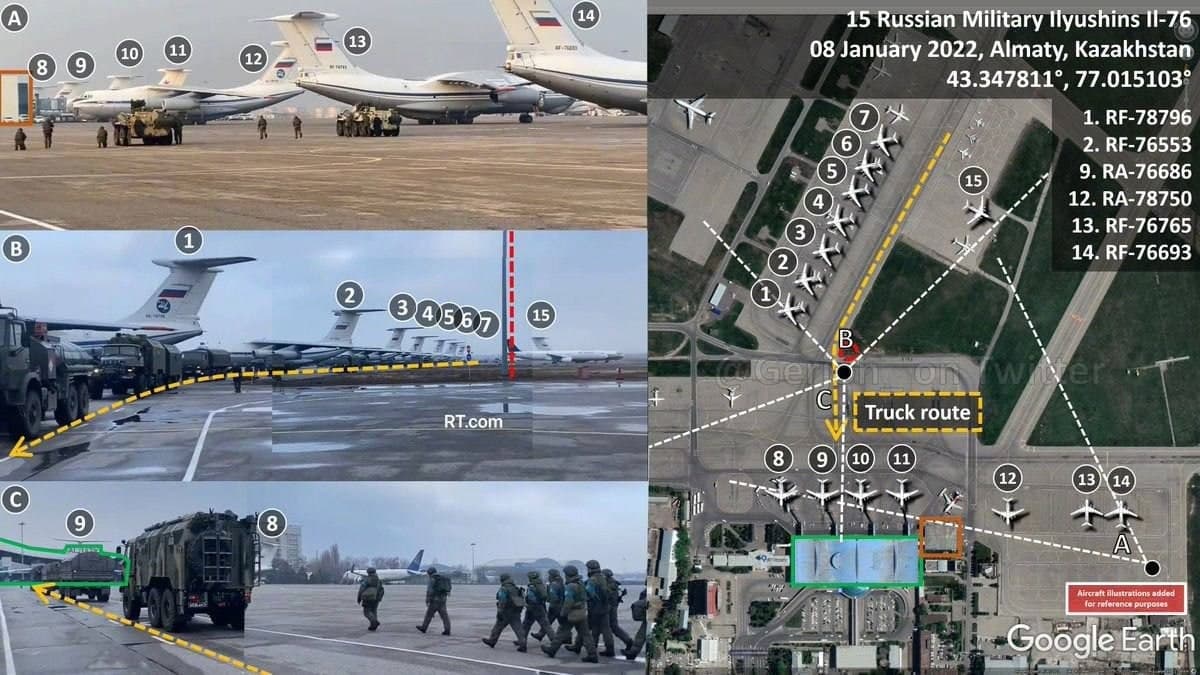 The raised loading ramps indicate that the aircraft are not in the process of unloading or loading.

Thus, to ensure the transportation of the aforementioned forces by 70 Il-76 aircraft in round-the-clock mode, approximately 16 hours could be enough.

According to the TASS agency [7], the deployment of the task force was completed on January 9, which means, it actually took 3 days. This is quite consistent with the above calculation, taking into account the fact that the operation was actually non-combat in nature, there was a full cycle of standard pre-flight checks, probably no replacement crews were used, etc.

A similar time was required for the mentioned above deployment of the Russian brigade in the Armenian-occupied part of Karabakh in 2020.

Arguably, the normal transfer time per one brigade of ground forces or airborne forces with the use of all operational IL-76 available in Russia is approximately 3 days, but can be reduced to 1 day in a critical situation, under appropriate weather conditions and with simplified pre-flight ground operations.

However, this does not mean that the Russian military transport aviation is able to carry out the transfer of 10 airborne brigades within 10 days, since an operation of this scale will be affected by the accumulation of technical irregularities, crew fatigue, logistics chain errors, etc.

How should we quantify it?

On the one hand, calculations and practice show that the mobility and threat of the simultaneous use of the Russian Airborne Forces is greatly exaggerated by the Russian propaganda. The entire military transport aviation of the Russian Federation will not be able to ensure the transfer of just one airborne division even within 2 or 3 days, not to mention its simultaneous landing. The above calculations also did not take into account the transportation of tanks, artillery and other weapons in service with Russian airborne divisions.

At the same time, the build-up of Russian rapid deployment forces at a maximum rate of up to 4 brigades in 3-4 days, using their own front-line airfields or captured adversary airfields, is a factor that can radically change the balance of forces in a critical area, where regular mechanized units have been previously deployed.