On the third day of the large-scale aggression against Ukraine, February 26, 2022, a Russian official publicly acknowledged a soldiers’ death during the “special operation” for the first time. Sergei Melikov, the head of Dagestan, expressed his condolences to the family of the officer Nurmagomed Gadzhimagomedov, a native of this republic.

While the authorities made it clear to the Russians that there were hundreds of casualties in the war, the largest North Caucasus republic turned out to be the first once again. This time, by the number of deaths comparing to other regions of Russia. Below you will find the list of Dagestanis mentioned in Russian obituaries and/or Ukrainian reports.

The exact count of casualties from Dagestan is unknown, but it significantly exceeds the number from list of those identified by name. According to locals, morgues in Belarus are full of the bodies of Russian soldiers. In addition to purely technical reasons connected to their identification and delivery to their homeland, there is also an order to inform about the losses gradually, so as not to shock the Russians with the true scale of the losses. And this order is being followed.

The sources of Kavkaz.Realii in the government and the military commissariat of Dagestan report [1] at least 130 contractors from the republic who died in Ukraine. However, the exact count of casualties among conscripts is unknown even to the senior officials. The Ukrainian leaders claimed that over 14 thousand Russian soldiers were killed. If thousands of Russian troops were killed, there might be hundreds of soldiers from Dagestan among them.

Why are so many sons of the Caucasus dying for the empire dominated by another “state-forming ethnicity”? In Buynaksk, Dagestan there is the permanent deployment station of the 136th Motorized Rifle Brigade [2], actively involved in the fighting in Ukraine, along with other units and formations of the 58th Field Army of the Russian Federation. In addition, the percentage of Dagestanis among contract soldiers in the Russian army is much higher than the average.

Military service in Dagestan is one of few options for young men to escape the depressed republic mismanaged by the Russian officials.

According to official statistics, Dagestan has the third highest birth rate in the Russian Federation and the first highest population growth rate. There are many young people in the republic who cannot fulfill their potential due to lack of jobs, social lifts and social justice.

Dagestan ranks first in the Russian Federation in terms of federal budget subsidies. Last year, the republic received 77.5 billion rubles. According to the same statistics, Dagestan has the lowest regional budget spending per capita – a bit more than 69 thousand rubles.

In terms of unemployment, Dagestan ranks second in Russia with a rate of 12.1%. But the real situation is even worse. Furthermore, according to the data of the of Civil Society Development Fund, the republic ranks second among the lowest income rates in Russia The average salary in Dagestan is just 32.3 thousand rubles.

Even among other plundered North Caucasian republics, Dagestan tops the list of recorded corruption-related crime rates. Moreover, the number of crimes has increased by 44% over the past year 2021. No wonder the republic is at the very bottom of the investment attractiveness rating among the federal regions.

Political issues of this multinational federal republic also remain unresolved. Major ethnical groups in Dagestan have already realized the risks of “living under the same roof”. Their national movements have set the goal of building separate republics with protected borders and the right to develop their own policies.

The peoples from the overpopulated highlands, primarily Avars, are actively moving to the plain, thereby disrupting the areas of compact ethnical settlement of the Kumyks. Nogais fear the cultural and demographic dominance of their kindred Kumyks. Like the latter, the Nogais stand up for their own separate republic, while making territorial claims to the neighboring parts of Stavropol Krai and Chechnya.

For more than 30 years, Akkin-Chechens have been fighting for the right to restore the Aukh region in Dagestan. They were promised this by the Russian authorities. However, to make it happen, Laks and Avars, who managed to settle here while the Chechens were deported, should be resettled. Laks from Aukh have been gradually moved to Makhachkala region, which the local Kumyks are not at all happy about.

The highlands of Dagestan have recently been engulfed in a guerrilla war with the federal government under the auspices of the Caucasus Emirate and the Islamic State. The armed opposition here began back in 1999, when the Russian army used artillery, missiles and aviation against the villages of the Kadar Gorge.

Those who can, migrate en masse from Dagestan to other regions of the Russian Federation, mostly to big cities. Quite numerous Dagestan communities have already formed there. They contribution greatly to the general inter-ethnic tension in Russian society. But there are still enough young, hungry and angry men in the republic itself.

Moscow seems to have deliberately decided to dispose of the problematic Dagestanis by turning them into cannon fodder in the war against Ukraine. In any case, they are actively called up to the army. Dagestanian regional military registration and enlistment offices promote signing contracts to participate in the “special operation”. Those who are willing to go are promised 177-215 thousand rubles per month in salary, depending on their rank.

As elsewhere in the Russian Federation, the local Dagestanian authorities demonstrate their loyalty to the Kremlin proclaiming “patriotic duty” and “fighting against fascism”. But what these satraps will do when Moscow, targeted by sanctions, will no longer be able to provide the promised money to young, hungry and armed Dagestanis in Russian uniforms?

This material was published on the website of the social movement Free Idel-Ural [3]; InformNapalm republishes it with the consent of the editors.

On March 19, 2022, volunteers of the InformNapalm international intelligence community also noted [4] on their official Telegram channel that the new obituaries on VK for the request “died during a special operation” appear on average every 4 minutes and cover many regions of Russia. The total number of obituaries as of the morning of March 19 was 16,691.

And this is, of course, incomplete data. Some obituaries may be repeated, but a huge number of casualties remain unknown to the public. Due to the high intensity of hostilities, the identification of the dead and their accounting statistics are far behind the realities. 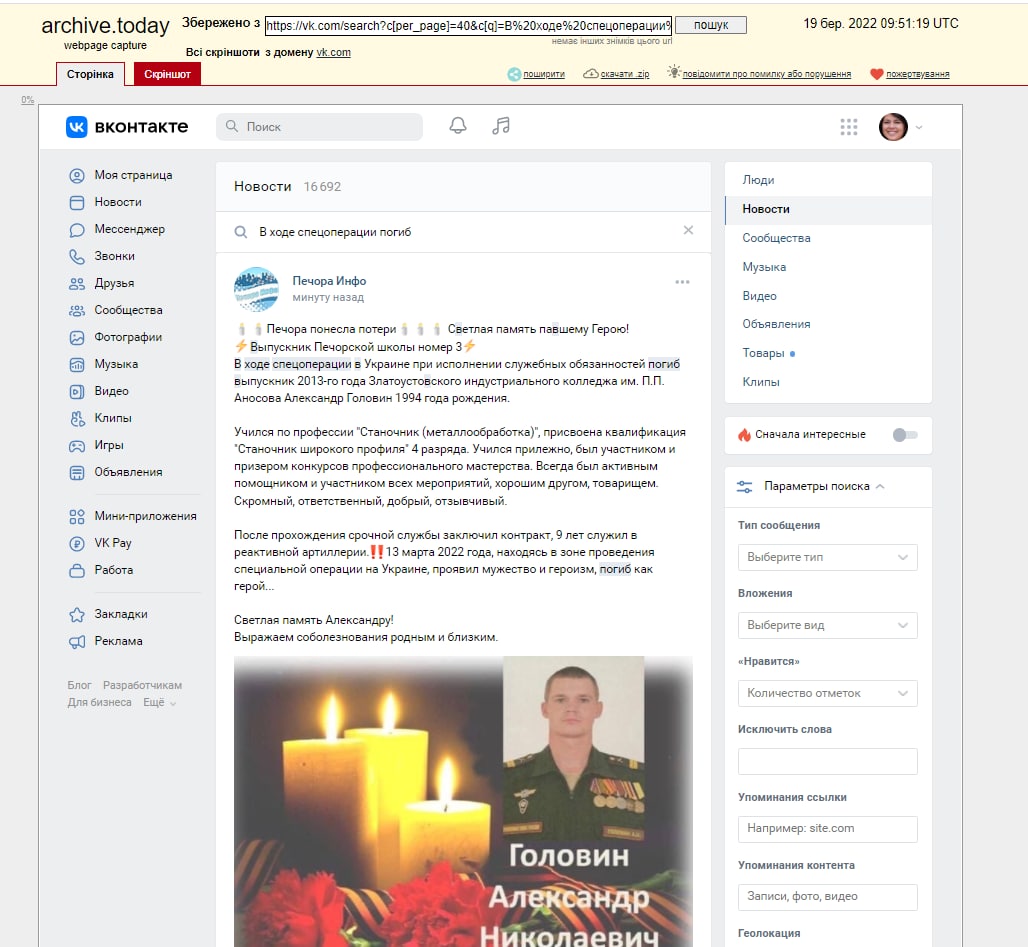 Read more: Appeal of the Ukraine at war to the peoples of Russia [7] 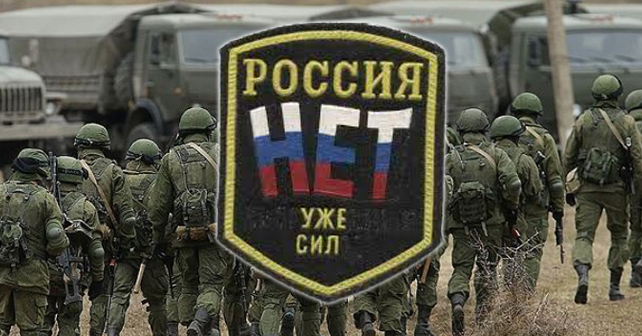 InformNapalm [12] does not receive any financial support from any country’s government or large donors. Only community volunteers and our readers help us to maintain the site. You can become one of the community volunteers. Please support the development of InformNapalm, the unique volunteer intelligence resource, with donations through Patreon [13].