May 18 is the Day of Remembrance of the victims of the Crimean Tatars genocide. We publish an article prepared by Crym Realii [1]. We hope it will help to understand the depth of the tragedy of deportation of the Crimean Tatars from Crimea in 1944. Now Crimeans face new security challenges, the Russian occupation authorities resort to reprisals against the indigenous population. In the 21st century, we may be on the verge of new tragedies, to foresee and avoid which is possible only through joint efforts of the entire world community.

According to the official Soviet version, the “eviction” was implemented because of the “massive desertion” of 20,000 Crimean Tatars at the beginning of World War II, and also allegedly with their “total collaboration” during the Nazi occupation of the peninsula. However, the actual number of deserters among the Crimean Tatars was comparable to the number of defectors of other nationalities. In addition, collective punishment was prohibited by the article 50 of the current at that time Hague Convention respecting the Laws and Customs of War on Land of 1907. According to many historians, the Soviet Union was preparing for a war with Turkey for the straits of the Bosporus and the Dardanelles and “cleansed” in 1943-1944 the Caucasus and Crimea as rear areas from a possibly disloyal population.

On May 11, 1944, Joseph Stalin signed a decree of the State Defense Committee No. 5859ss on the organization of deportation of Crimean Tatars. The main phase of the special operation began before the dawn on May 18 and ended in the evening of May 20. The remaining Crimean Tatars were evicted during the subsequent deportation of Armenian, Bulgarians, and Greeks on June 27-28, 1944. The few who returned home from special settlements were again expelled from the peninsula until the end of the 1960s.

The deportation was carried out by the forces of the NKVD, the Soviet police at the time. The people were given on average up to 15 minutes to get ready. Officially, a family was allowed to take up to 500 kg of belongings and food, but in reality everything was limited to hand luggage (and sometimes without it). The evicted were transported by trucks to railway stations, where they were loaded in freight cars either immediately, or 1-2 days later. The trains were in transit for 2-3 weeks. The property of the Crimean Tatars that remained in Crimea was later recorded and mostly given to the settlers from Russia and Ukraine.

Number of the deported 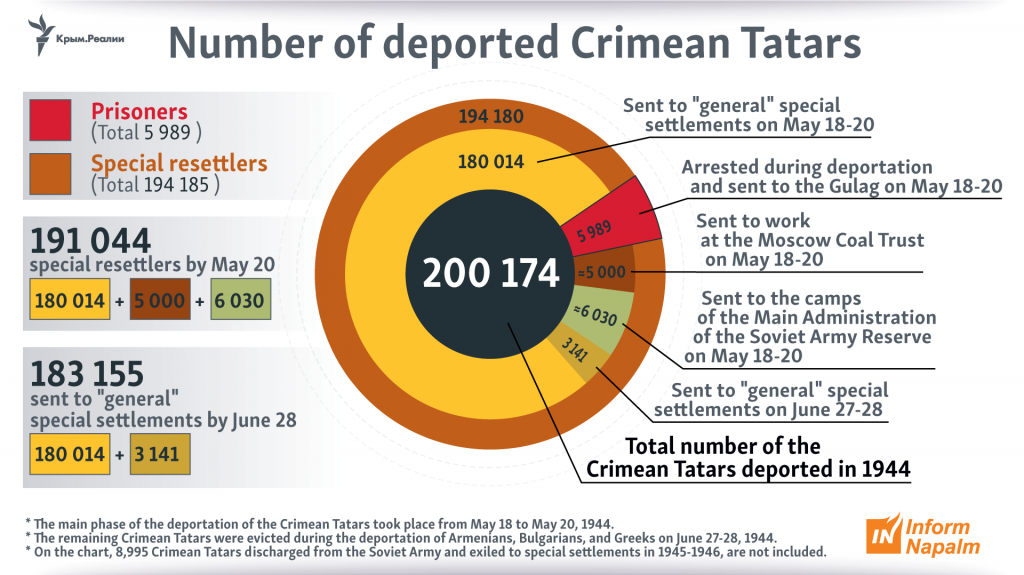 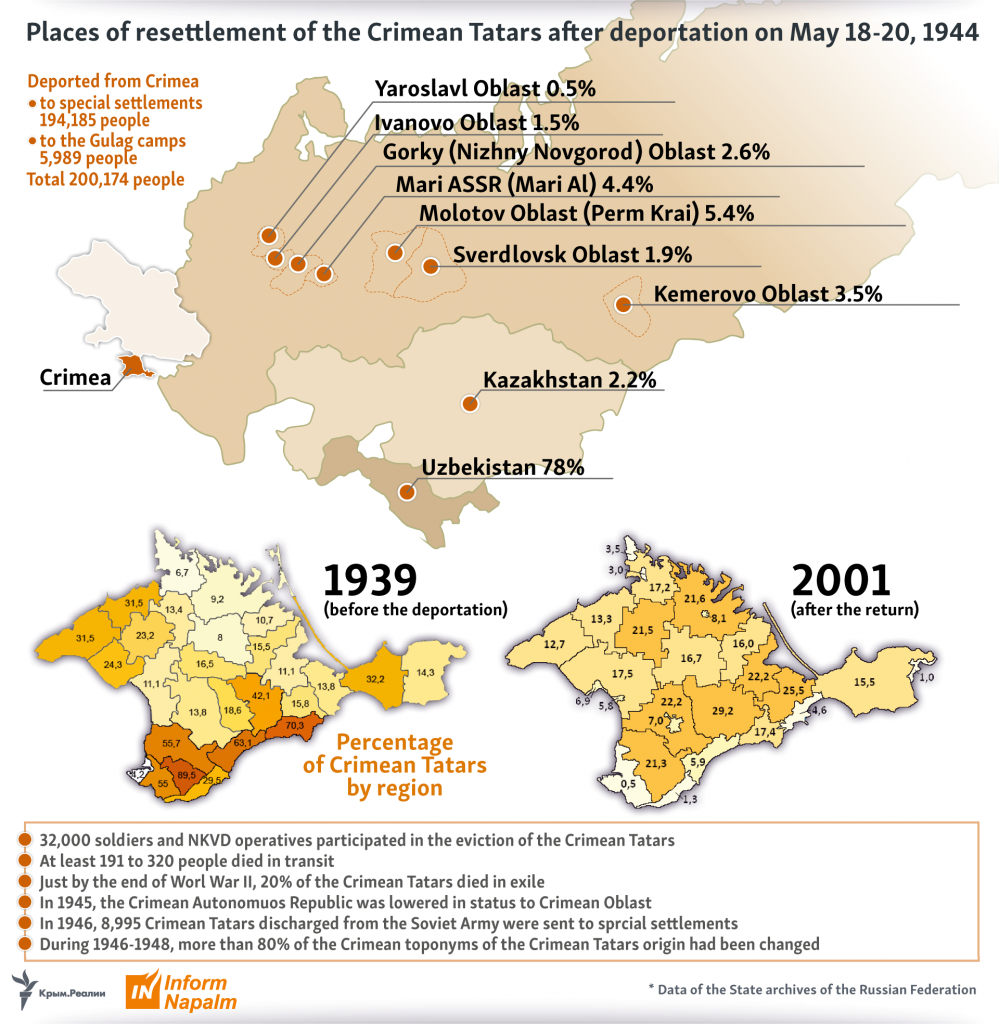 According to various official estimates, 20-25% of all Crimean Tatars died in special settlements. According to unofficial data (self-census of the Crimean Tatar National Movement), this number reached 46%. Those who survived by 1945 were considered exiled forever and did not have the right to leave their place of residence under the threat of 20 years of hard labor. In 1967, the charge of mass collaboration of the Crimean Tatars with the Nazis was lifted, but they were not allowed to return to Crimea. Mass repatriation began only in 1989.

The material is posted with the permission of Radio Free Europe / Radio Liberty.

Translated by InformNapalmEnglish [5] specially for InformNapalm.org [6] site,   an active link to the authors and our project is obligatory for any reprint or further use of the material.