Anthony Lee Iacocca once hit the mark in his saying about headlines: “Since most people don’t read the whole story unless they’re especially interested in the subject, for the majority, the headline is the story. That’s why the one who composes headlines has an immense impact on readers’ perception of news”.

Today I came across a great piece of the art of headlines in a German newspaper, Die Zeit, but I will go back to it later. To start with, here are a couple of headline examples from German media for the last few months, that is a little more than two years after the beginning of the Russian occupation of the Ukrainian Crimea and further military aggression against Ukraine.

Such faux pas appear now and then, here and there. Look at this headline from the 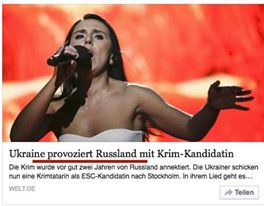 newspaper Die Welt, 22 February 2016, [1]concerning Eurovision and Jamala: “Ukraine provokes Russia with a Crimean Candidate”. Yes, a thrice-told tale. Ukraine has been “provoking” Russia for two years already. It started with Ukraine arranging revolution at home, then allowing some “green men” to capture its peninsula, then it provoked Russian professional military men to come to Donbas and kill its citizens, and afterwards insolently began to defend its own eastern territory, managed to cause Western sanctions, refused to buy gas from Russia, and now has the gall to oppose the bear hug of the “Russian World” and speaks about some kind of its own vision for its future. A pure provocation, no doubt. 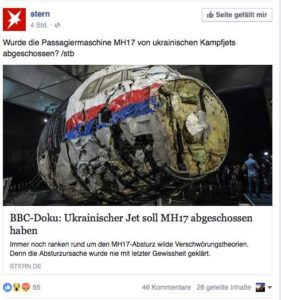 In May, BBC showed a documentary series about MH17 conspiracy theories. The film director is quite famous; you can easily find his films online. The plot concept is simple: he finds all kinds of loonies with their funny theories about some or other events (9/11, etc.), lets them speak out on screen, and then tears their theories to pieces. However, what does the German magazine Stern [2] write, announcing the film in Germany? In keeping with the best Kremlin propaganda line, we read: “The BBC Documentary Series: a Ukrainian Fighter Might Have Shot Down МН17″… Catchy, isn’t it? 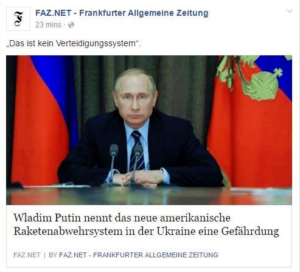 Or look at another outstanding headline [3] made up a few weeks ago by a respectable and serious German newspaper, the FAZ: “Vladimir Putin About the American BMD System in Ukraine: It’s a Threat”. I immediately asked the question at the FAZ forum: where exactly in Ukraine had German journalists deployed the American ballistic missile defense system — I was eager to communicate this wonderful news to my fellows, who, unlike the German journalists, were in the dark about such a welcome development. Though, the article itself was about the US BMD system in Romania. It’s difficult to understand how Ukraine suddenly appeared out of thin air in the headline. Is that hunting for readers or deliberate sabotage? Given the fact that the topic of American weapons, American soldiers and tons of American cookies in Ukraine are some of the favorite themes of the Kremlin propaganda?

One gets the impression that journalism as such has ceased to exist. There still are some people who are true journalists, but is there journalism?

For some reason, journalists are quite sure of their full inviolability, as democracy makes freedom of speech, among other things, a cornerstone of the democratic social fabric.

For me, the crux here is this: any freedom implies responsibility. There is no freedom without realizing one’s own responsibility, or any rights without obligations. First of all, to oneself.

Under the guise of freedom of speech, terrorists and propagandists spawn their media resources around the world, deliberately spread lies, distort reality to please the powers that be, and fight the war for people’s minds and souls.

Nobody remembers the journalism ethics that is also set in law. Nobody thinks of the obligations to bring the truth to the people, to get down to bed-rock, and to highlight the essence of things…

Under the guise of freedom of speech, “journalists” (let’s call them media workers) have learned to pass their subjective personal opinions for reality and spin their yarn in such a manner that the notorious objective reality has just ceased to exist. It is gone.

And a personal opinion is what we are offered at best. In which share of cases do we look at trivial bribery? Half? Or maybe more? There surely is corruption within journalists’circles. Everyone loves to speculate about graft between civil servants, but has anybody ever heard such an expression as “journalist corruption”? Well, I have just coined it.

What do we have? The people wielding a skillful pen, who are able to play with words and present them so that they penetrate human consciousness. It is their profession. To convey a message. To be a Courier. A herald of news.

And in a contemporary context, where the people’s favorite leisure pastime is some TV in the evening, and the content always comes from this or that country. This makes “journalists” into an army of soldiers who can capture the most important thing: the human mind and spirit. They can reprogram person’s vision of the world. Affect the perception of reality… A virtual army that is nowadays capable of turning real events around, as the virtual world has long ago merged with the real one and become a part of it. And all this army holds huge posters “FREEDOM OF SPEECH!” in giant print on them.

What is freedom of speech? It is freedom to express one’s own opinion (OWN opinion) for everyone. But “everyone” does not work in organizations influencing the mass consciousness. Should not the people who exert such an influence, have their freedom of speech checked by truth, honor, honesty, ethics and morals?

After the OSCE representatives had been shelled in Donbas, do journalists have the right to write headlines like this: “Ukraine: OSCE Representatives Have Been Shelled in Eastern Ukraine” (Die Zeit [4], one of the biggest German newspapers)? 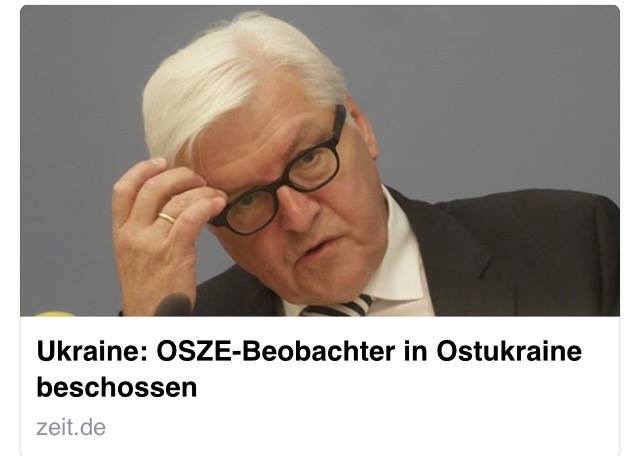 An interesting headline, don’t you think so? And quite credible… It happened in Ukraine, after all. So, were these OSCE reps shot at? Yes. Then, what is wrong?

Any psychologist will tell you that the only thing remaining in the human mind upon reading this would be: “Ukraine! OSCE! Shelling!”
Nothing more.

And how about this headline version for the same article – “OSCE representatives have been shelled in the occupied Donbas by pro-Russian terrorists using Russian weapons”?

The second headline is objective reality. But the “journalists” kept it back. At the same time, they “have not distorted anything”, formally.

They left the readers with a clear idea that Ukrainians in Donbas shoot, even at foreign representatives. Russia is not even in the picture. Russian soldiers are not there. Russian weapons have nothing in common with it. Parts of Donbas are not designated separately as the Ukrainian territory occupied by new nazis for two years and fought over for two years. There is nothing of the sort in the headlines.

This publication has been prepared by Irina Schlegel  [5]specially for InformNapalm.

(CC BY) Information specially prepared for InformNapalm.org [7] site, an active link to the authors and our project is obligatory for any reprint or further use of the material.