On January 15, the Defense Intelligence of the Ukrainian Ministry of Defense reported [1] that cisterns with ammonia were delivered to a chemical plant Concern Stirol in the town of Horlivka located in the occupied part of Donetsk Oblast. The cisterns are leaking the poisonous chemicals into the air.

The intelligence service warns that the leakage of these substances could cause an ecological catastrophe. At the same time, Russian propaganda can direct all its power to accusing Ukraine of “using poisonous chemicals against the population of the Donbas,” and Russian military-political leadership can declare the need for a military invasion “to protect Russian citizens.”

This information may be In line with previously reported information. Recall that on December 21, 2021, Russian Defense Minister Sergei Shoigu made a provocative statement at an extended meeting of the board of the Russian Defense Ministry with Vladimir Putin in attendance. InformNapalm analyzed [2] it from the point of view of creating a newsbreak about a “chemical attack in the Donbas” at the highest state level. 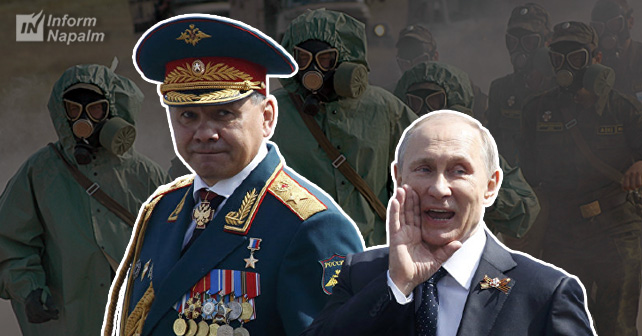 On December 24, 2021, after the release of information about the interception of the report, all activities related to the release of fakes about “chemical weapons” and “US private military companies” were put on hold [4]. The reason for suspension: if the documents were intercepted, then there is a high probability that the previously prepared materials were compromised and could be disclosed. And this will lead to the opposite consequences on the international arena than those that the Kremlin was counting on. Therefore, the topic of the “chemical attack” was put on pause.

On January 6, Russia started transferring airborne and special forces units [5] to Kazakhstan. International negotiations were also underway, so the Kremlin was temporarily not up to inciting the next stage of “chemical provocations”.

Let’s hope that the proactive publication of the facts reported by the Ukrainian Defense Intelligence will also affect Moscow’s actions because the whole world is closely watching every step of the Russian Federation both near the borders of Ukraine and in the occupied territories.

In 2019, the Ukrainian Ministry for Reintegration of the Temporarily Occupied Territories reported [6] that the Russian occupation administration closed down Concern Stirol in Horlivka and tons of hazardous chemicals were stored there.  According to the Ministry, several dozens of tons of hazardous chemicals were stored at the enterprise during 2018, at the beginning of 2018 there were up to 80 tons of ammonia there. Irresponsible handling of such a substance can cause an environmental disaster.

By Andrii Lisitcin specially for InformNapalm. Translated by Svitlana Kemblowski. Distribution and reprint with reference to InformNapalm is welcome! (Creative Commons — Attribution 4.0 International — CC BY 4.0)

InformNapalm does not receive any financial support from any country’s government or large donors. Only community volunteers and our readers help us to maintain the site. You can also volunteer or support the development of the unique volunteer intelligence resource InformNapalm with your donations through Patreon [18].