InformNapalm international intelligence community continues identifying regular Russian servicemen who took part in the hybrid aggression against Ukraine. As of July 2021, InformNapalm has collected evidence against over 2,630 Russian soldiers and officers [1] in its OSINT investigations database. Another investigation by the Georgian editorial team of InformNapalm adds new facts to these data.

On August 12, 2014, a convoy of Russian troops of 1,200 people, among whom servicemen from the 18th Motorized Rifle Brigade (MRB), entered Ukraine and in the afternoon of August 13 stopped in the town of Snizhne, Donetsk Oblast. On the same day, Ukrainian artillery struck the convoy. Of the 1200 people, the Russians lost 120 killed and 450 wounded (Novaya Gazeta 09/01/2014 [2]). Among those killed in action, were previously identified contract servicemen of the 18th MRB from Chechnya – Anton Tumanov and Robert Artyunyan (Arutyunyan).

The purpose of the new OSINT investigation is to identify Russian servicemen of the 18th MRB, who for almost 7 years could manage to hide their involvement in the “Ukrainian deployment”. Based on the results of this investigation, we could identify several military men of the Russian Army, including an officer, commander of the engineer platoon of the 1st Motorized Rifle Battalion, Alexander Smirnov. A group photograph of August 2014, in which 8 Russian servicemen with white identification armbands are posing against a BTR-82, helped to identify the next participants in the aggression against Ukraine. The original source of the photo [3] was the social media page of the Russian contract soldier, a participant in those events, which was subsequently actively spread in the media and on social networks. 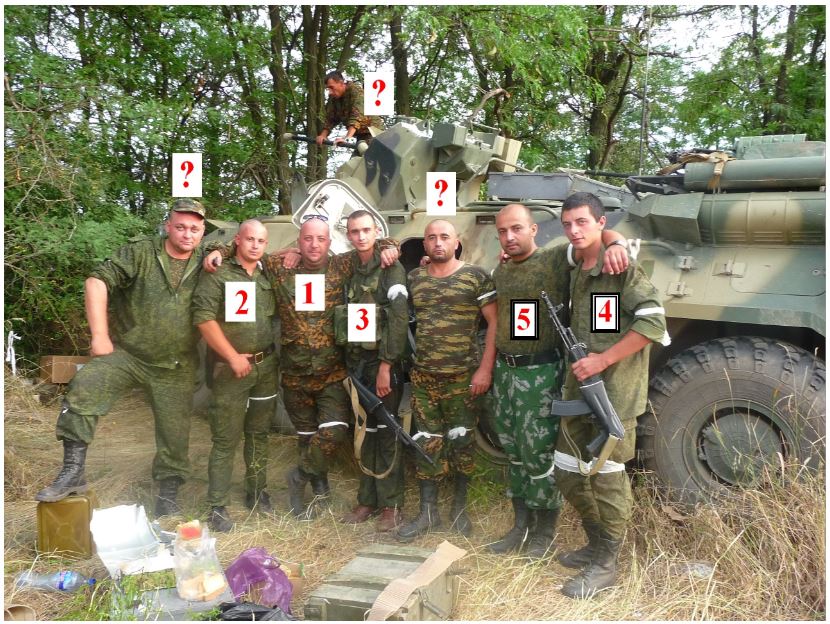 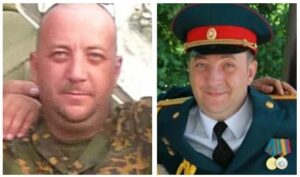 Graduated from Nizhny Novgorod Higher Military Command School in the town of Kstovo in 2007.

It is noteworthy that Smirnov appears under the #518 in the InformNapalm investigation List 1097 [4] containing information about the participants in the invasion of Crimea. 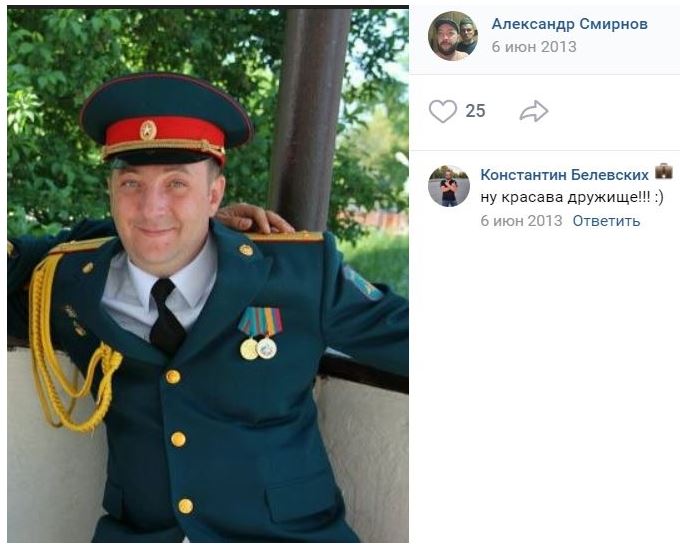 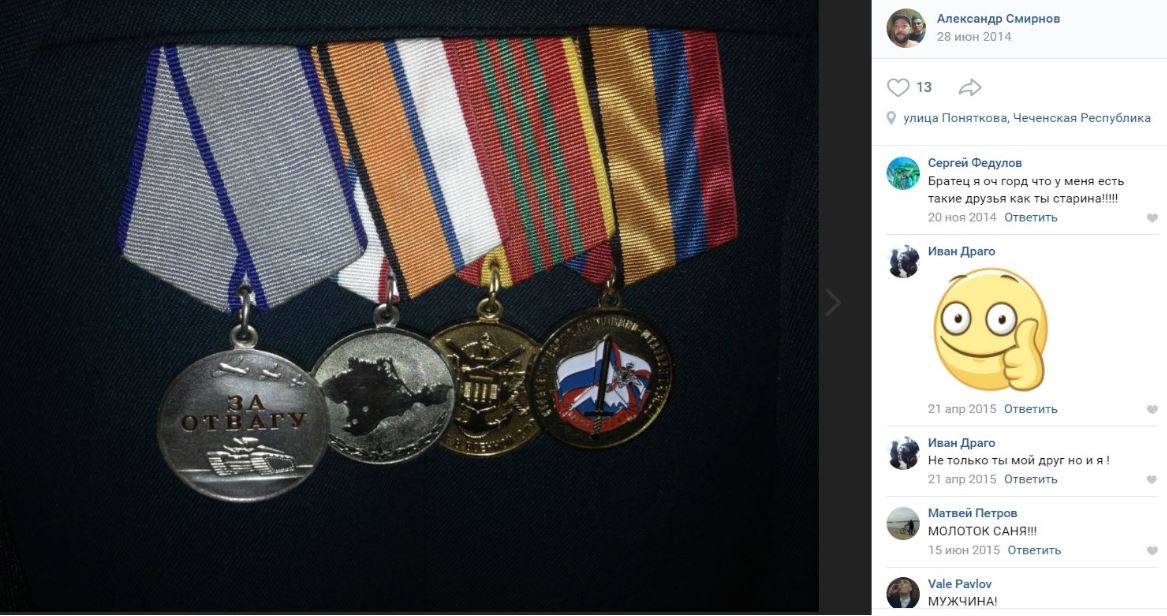 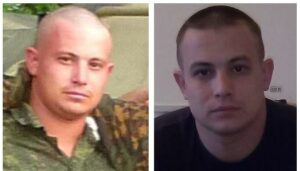 As of 2014, a contract soldier, sergeant, senior sapper of the 2nd engineer squad of the engineer platoon of the 1st battalion of the 18th MRB.

Mikhail Iskovich also appears under #525 in the InformNapalm investigation List 1097 [4] containing information about the participants in the invasion of Crimea. Link to the social media account: VK [11] (archive [12]).

In 2015 Newsweek [13], Atlantic Council [14] and other sources published materials about Russia’s participation in the war against Ukraine, which includes an interview and the name of a witness to those events, a contract soldier of the 18th MRB Rolan Ramazanov. 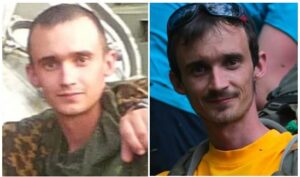 There have been multiple mass media reports about the contract soldiers of the 18th MRB Anton Tumanov and Robert Arutyunyan who died in Ukraine. The detailed material was published by Novaya Gazeta [2] on September 1, 2014. We present this data as a reminder: 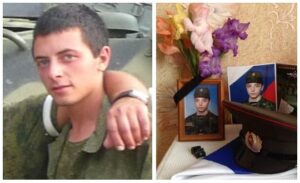 In 2012 and 2013, he did the first part of his conscript military service at the training unit for military logistics in Penza, then at the Russian 4th Military Base (military unit 66431) in the occupied Tskhinvali region of Georgia. As of June 2014 he was a contract soldier of the 18th MRB.

“In June we were sent to the Rostov Oblast for exercises, and in August a new order came from above, and we must go to Ukraine. I share everything with my beloved Nastya Chernova, told her that we were sent to escort weapons and equipment for the militia and immediately back. Later, on August 10, a new order came, I told my mother about it: ‘Tomorrow they will send us to Donetsk, we will help the militia, we are handing over documents and phones, they gave us two grenades and 150 rounds each,’ if something happens to me, at least she alone will have to know the truth, I go not of my own free will. We handed over the phones and went to Ukraine, I place my hope in our modern armor, including the BTR-82AM, which should cover us. On August 13 we stopped at the plant in the town of Snizhne, I hope nothing happens to us and we will quickly return home. In my 20s, I don’t want to become a murderer or die.” Anton Tumanov , military unit 27777, 18th MRB of the Russian Army, Donetsk Oblast, August 2014 [24] . 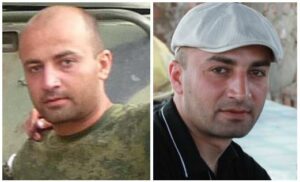 At this stage, 3 servicemen out of 8 shown in the group photograph remain unidentified. 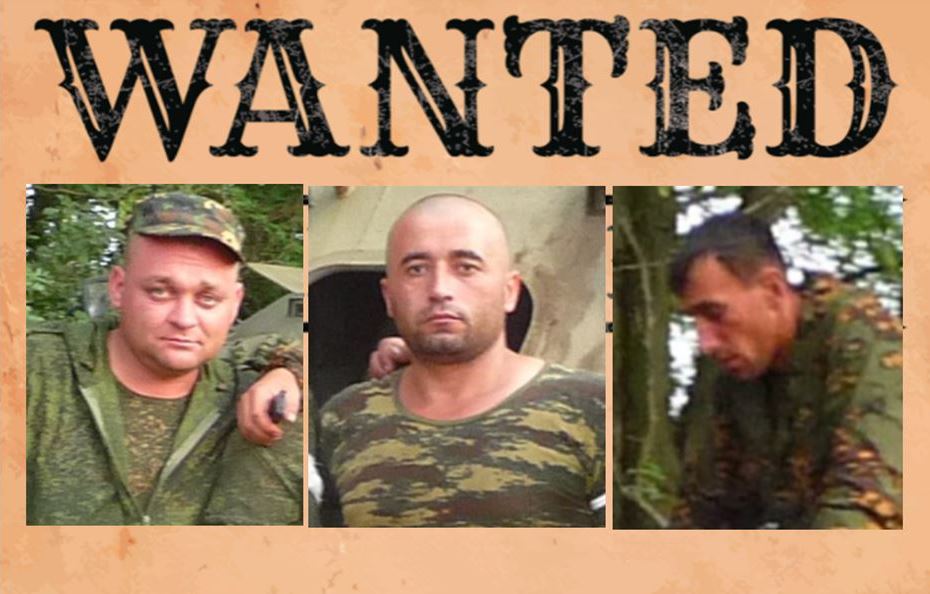 Other groups and individual servicemen of the 18th MRB of the Russian Army appeared in more than a dozen of InformNapalm investigations: