In 2020, Ukraine and the world remember many tragic anniversaries on the calendar of the Russo-Ukrainian war. Five years have passed since these tragic dates, since the days of bloody acts of terrorism and war crimes committed by Russian hybrid troops – mercenaries, collaborators and active duty officers of the Russian Armed Forces. After these tragedies, research materials have been published on the website of InformNapalm International Volunteer Community that shed light on important circumstances, presented evidence and reported the perpetrators of these crimes. All of these publications have been translated into dozens of languages, and by shearing them, volunteers remind the international community of the true face of the Russian Federation. They remind of the atrocities of a country waging hybrid wars and carrying out terrorist attacks against civilians. Unfortunately, the perpetrators of these terrible acts of terrorism and those who directed and coordinated their actions have not yet been punished, but these crimes have no statute of limitations; the main thing is to remember about them.

On January 13, 2015, Russian terrorists shelled a civilian bus near the town of Volnovakha. The attack killed 12 people and injured 18. 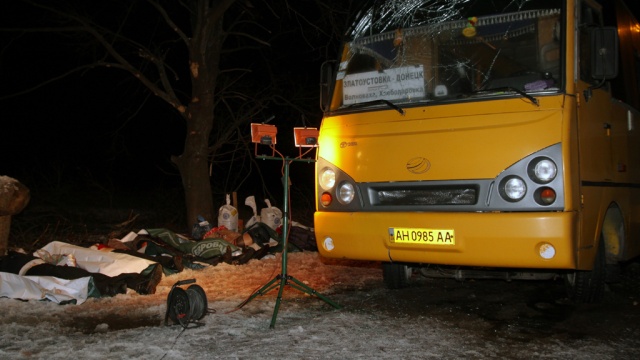 In 2017, the Prosecutor General’s Office of Ukraine [2] had named the organizers of the shelling. Investigators of the Security Service of Ukraine brought offences of a serious crime to a citizen of the Russian Federation, Colonel of the Russian Armed Forces Anatoly Sinelnikov (call sign Zakhar), who gave commands to the artillery units of pro-Russian terrorists.

On January 22, 2015, Russian terrorists fired at Donetskmiskmash (Bosse) bus stop in Donetsk. As a result, 8 people were killed and more than 20 were injured. 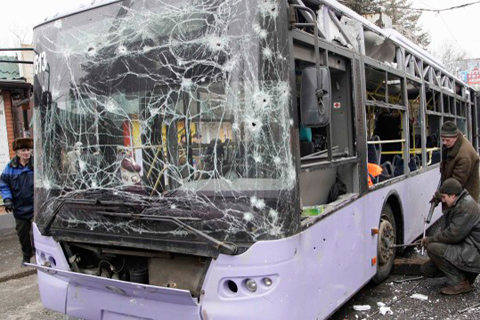 People surround a damaged trolleybus in Donetsk, January 22, 2015. At least six civilians were killed on Thursday when a shell or a mortar hit a trolleybus stop in the rebel-controlled city of Donetsk in eastern Ukraine, a Reuters witness said. The Reuters cameraman said he saw six bodies on the ground near, and inside, a trolleybus in a southern district of the city. Windows of shops nearby had been blown out by the blast. REUTERS/Alexander Ermochenko

Immediately after the firing, the militants used the tragedy for the purpose of information and psychological pressure. They brought to the scene of the tragedy 17 Ukrainian prisoners of war, publicly humiliated and beat them, and filmed it on video. Then the prisoners were forced to load the bodies of the dead on a vehicle.

Based on photos and videos from the scene of the tragedy, the volunteers conducted independent OSINT investigations [4] that indicated that the shelling was carried out by terrorists from a 82 mm caliber mortar. Thanks to a photo of Christopher Miller, who took a close-up shot of a phone with a compass near a crater at the site of a bus attack, the volunteers determined the direction from which the shelling came. The volunteers’ conclusion coincided with the OSCE’s findings and indicated that the firing was done from a close proximity, and the Ukrainian artillery, which was more than 15 km away from the affected area, was not involved. 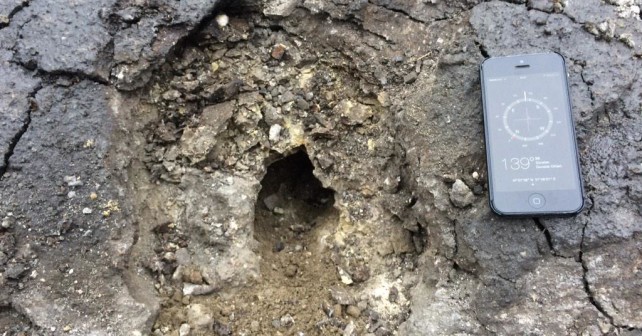 Two days after the shelling, observers from Human Rights Watch said that the craters at the site were filled up on the orders from “local authorities” and, therefore any further examination and research was impossible.In addition to analyzing photos and videos from the site of the shooting, volunteers from the InformNapalm community monitored social networking messages from local residents on the day of the tragedy and found that most of them reported mortar rather than artillery shelling and indicated that the mortar had “worked” from housing blocks in Donetsk. The time when the residents heard the mortar bombardment roughly coincided with the time of the tragedy.

At the same time, Russian propaganda tried to distort information about this tragedy and shift the blame for it to the Ukrainian side. However, on January 28, 2015, DPR military themselves reported the detention of a group of three saboteurs who were moving around the city in a vehicle with a mortar, all three were citizens of the Russian Federation.

On January 24, 2015, Russian military and collaborators fired shells at the Vostochny neighborhood in Mariupol from rocket launchers. 29 people were killed and more than 92 injured, including children and teenagers.The investigation into this large-scale terrorist attack took a long time, and only on May 7, 2018, at a press briefing, the Security Service of Ukraine presented evidence that the firing of Mariupol was carried out by personnel of the Russian military. From the territory of Russia, the operation was directly directed by the chief of missile troops and artillery of the Southern military district of the Armed Forces of the Russian Federation, Major-General Stepan Yaroshchuk. In the temporarily occupied Donetsk, the shelling was led by Colonel of the Russian Armed Forces Alexander Tsaplyuk with the call sign Gorets. The coordination of the Russian missile units was carried out by Lieutenant Colonel of the Russian Armed Forces Maxim Vlasov with the call sign Yugra.

In 2019, before the anniversary of the Mariupol shelling, InformNapalm volunteers, using information from open sources, gathered intelligence and additional data on Russian military personnel involved in the war crime and the killing of dozens of civilians [6]. Volunteers found that after the terrorist attack in Mariupol, having gained experience in the massacres of civilians, in June 2015, the Russian Colonel Alexander Tsaplyuk was appointed chief of the Penza Artillery Institute, and in 2017, Vladimir Putin personally awarded him a military rank of Major General.It is also interesting that another military offender involved in the tragedy, Colonel of the Russian Armed Forces Oleg Tsekov was appointed personally by Vladimir Putin by his private order, to the post of Deputy Commander of the 8th Army of the Southern Military District, and also promoted to the rank of Major General. 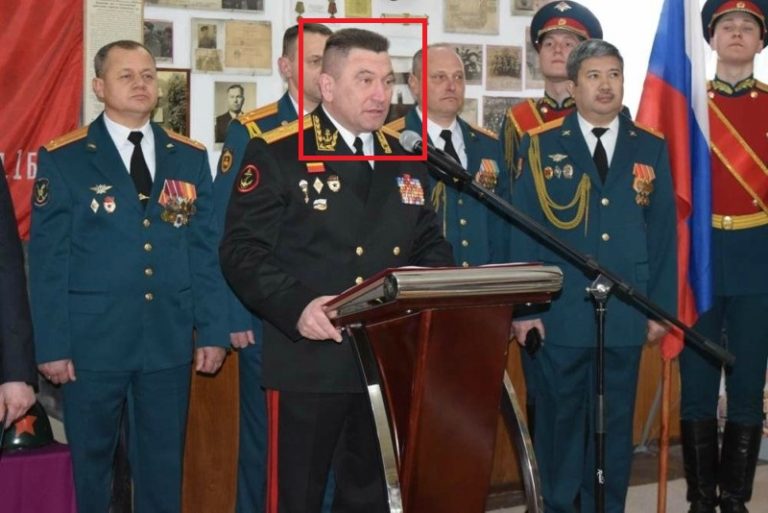 Other Russian officers who have been promoted for aggression against Ukraine by the general ranks are listed in the InformNapalm research materials. The Russian media even wrote that the commanding officers of the 8th Army were selected especially carefully, with the preference given to “combatants”. This particular approach was due to the fact that the 8th Army and the 150th Motorized Infantry Brigade that was part of it were deployed in a strategic direction for Russia – near the border with Ukraine.In 2020, when we commemorate the 5th anniversary of the terrible acts of terrorism and war crimes against the people of Ukraine, committed under the direct leadership of the Russian military, the Russian Federation does not admit its responsibility. Vladimir Putin continues to make allegations that the Russian Federation is not a party to the conflict. He continues to visit international forums, to be greeted by the leaders of the Western democratic countries. He shake hands with EU leaders, the President of the United States and the President of Ukraine, who also wished him a Happy New Year. Such  acceptance of the aggressor and restoration of friendly relations not only do not contributes to the ending of the war in the Donbas and the occupation of Crimea, but also encourage the offender to further implement his plans using the hybrid military and terrorist potential of the Russian army and special services. And the next target for Russian GRADs and mortars may be not only Ukrainian cities, but also other neighboring states, or those countries where Russians see the possibility of expanding their geopolitical influence through blood, war, suffering, and chaos.

This material in Ukrainian was prepared by InformNapalm for Tyzden.ua [9]. Translated by Svitlana Kemblovski. Distribution and reprint with reference to the source is welcome! (Creative Commons — Attribution 4.0 International — CC BY 4.0)

InformNapalm [10] does not have any financial support from the government of any country or donors, the only sponsors of the project are its volunteers and readers. You too can help InformNapalm by making a charitable contribution through the Patreon platform [11].