This story is about a new potential threat from Russia. So far, it is at a preliminary stage, but the danger can be closer and more real than it seems.

The Russian Federation used the armed units it calls Kazaks* during its annexation of Crimea and invasion into parts of the Donetsk and Luhansk regions. Now, similar structures are being formed along the border between Russia and the Kharkiv, Sumy, and Chernihiv regions of Ukraine.

[*A note from the translator. There is a historical term “Cossack” in the literature, applied to mounted popular militias armed with spears. It has been, traditionally, applied to both Russian and Ukrainian militias of this kind. However, in this translation we prefer to call the Russian militants Kazaks, which actually corresponds to the Russian pronunciation of this word. The Ukrainian Cossacks (or rather Kozaks) have nothing to do with this story.]

Specialists trained to work with the Kazaks are being sent from the Russian Federal Security Service (FSB) to various official positions in towns along the border with Ukraine. These specialists recruit Kazak formations and prepare them to perform special military tasks. Simultaneously, local paramilitary Kazak formations are being included into regular Russian troops located near the border with Ukraine. Members of these formations now are regularly participating in the regular Russian army drills. This means that there is an opportunity for the paramilitary formations to undergo a transformation from the volunteer Kazak “fraternities” into units highly capable of modern combat.

Also, at the end of 2019, Russia changed its laws regarding the Kazaks, making them subject of a more rigorous state control. Taken together, these facts point at the plans to use the Kazaks for a variety of purposes and, in particular, for possible special combat missions against Ukraine.

They plan to replicate the experience of the occupier forces

At the end of 2019, a number of changes were introduced into the laws of the Russian Federation to enhance the centralization of the Kazak structures. In November 2019, the Russian president signed into law the relevant decree #543, titled, “About the All-Russia Kazak Community”, thereby creating a special office to direct all Kazak units, with its headquarters in Moscow.

President Putin also signed into law the decree # 544, which makes Nikolai Doluda the chief of the above-mentioned office. This man was appointed Lieutenant Governor of the Krasnodar region of Russia in 2006 and served also as the Ataman (military commander) of the Kazak paramilitary force of the Kuban region of Russia since 2007. In 2014, Doluda took part in the annexation of Crimea [2] by the Russian Armed Forces.

There is also a presidential decree #380rp, which approved the new list of members of a special Presidential Council of Kazak Affairs. Governors of Russian federal regions were excluded from the list. This, too, makes the control of Kazaks more centralized.

Kazak formations exist all over the Russian Federation. Besides the regions where Kazaks existed historically (the Don, Kuban, Volga, Southern Urals, Baikal, and Russian Far East regions), new Kazak paramilitary units have appeared also in the Central Non-Black Earth District, and elsewhere. Many of them began to form in the 1990s, but until now remained decorative. 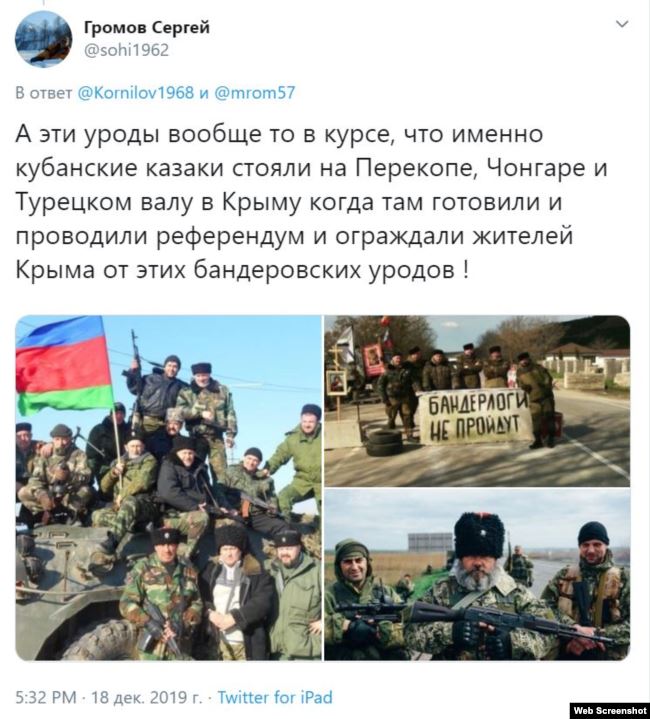 Nikolai Doluda, whom we mentioned above, played a big role in the transformation of the Kuban Kazak community from something that reminded more of an “ethnographic theater” to a real fighting force. Now he is the supervisor of the entire community of Kazaks in Russia.

For quite a long time, Kazaks have been treated by the leadership of the Russian Federation as their regular armed forces’ reserve. Back in 2012, Nikolai Makarov, the Head of the Russian Chiefs of Staff, told [4] the Izvestia newspaper: “We are forming Kazak troops. Every military district will have at least one brigade of Kazaks.” The process is slow, but it is continuing. A number of the Russian Armed Forces’ units and formations have the word “Kazak” in their official titles, but creation of units entirely consisting of Kazaks is something that started rather recently. 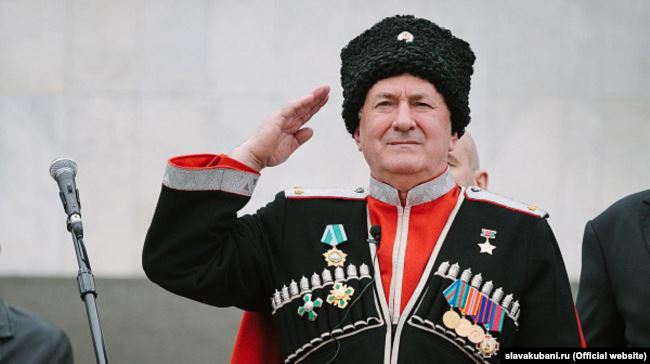 The mechanism of recruiting the reservists [6] has been worked out in the Don region of Russia since 2016. Each Kazak reservist company reports for a drill to the military base of the Eleventh Special Engineering Brigade of the Russian Armed Forces, located near the border with Ukraine [7], in the city of Kamensk-Shakhtinskoye. The drills are held for 2-3 days every month, and for three weeks once a year. The units were made to take part in large-scale military exercises like Zapad-2017, Vostok-2018, Centr-2019 and other.

The first Kazak unit where the recruits began to serve as regular army soldiers was formed [7] in 2018 in the Western Military District of Russia, in Belgorod Oblast. It is a part of the Petrokuvsky motorized rifle regiment. This regiment is located in the town of Valuyki and in the village of Solot.

It is interesting that a number of different Russian federal regions report about the plans to recruit Kazaks into the Russian Armed Forces. Thus, an anonymous @UkraineHack telegram channel has, a few days ago, published a “Plan of the Central Military District” where it is mentioned how the reservist Kazaks will be recruited into the contract-based service to the units in regular Russian Army.

Who is in charge of activating Russian Kazak force along the Ukrainian border?

The Russian security service, FSB, and one of its units, the Federal Border Control Service, play a significant role in the preparation of the Kazak formations for combat missions. It is interesting that since August 2018, the regional border control service of the Belgorod and Voronezh Oblasts has been headed by Dmitriy Prokopov, a person who has an experience of working with the Kazak community of Kuban. Till 2012, he was the head of the regional border control service of the city of Timoshevsk inside the jurisdiction of the Black and Azov Sea coastal guard of the FSB.

Prokopov’s transfers to other regions coincide with the uptick in Kazaks recruitment by the Russian government for the purpose of fulfilling certain tasks, including border control.

In 2014, Dmitriy Prokopov was the First Deputy of the chief of the Office of Border Patrol of the FSB in the Astrakhan Oblast and the Autonomous Republic of Kalmykia. It was exactly the time when a regional legislation about the Kazak [8] enforcement and the respective federal aid [9] was adopted. Prokopov’s work resulted in the establishing of the Kazak border patrol formation. It began to serve in March 2017. Even though Colonel Prokopov was already transferred to another FSB jurisdiction, it was his work that facilitated the shaping of this formation. Now, the number of those who serve in this formation keeps growing, and the frequency with which it performs the border patrol raids is increasing.

Prokopov’s next destination was the island of Sakhalin. As the first deputy of the island’s Border Patrol Department of the FSB, in the second half of 2016 he became in charge of the transition of the first Kazak paramilitary band into a regular border patrol unit. He also started to create another Kazak formation.

In August 2018, Dmitriy Prokopov was appointed chief of the Belgorod and Voronezh Regional Border Patrol Department of the FSB. In March 2019, the Duma (parliament) of the Voronezh Oblast adopted a law about “encouraging volunteers to patrol [Russian] borders. Primarily, under “volunteers” the law meant the Kazak formations [10]. A similar campaign started in the Belgorod Oblast [11].

Simultaneously, other individuals from the South of Russia were also assigned to operational positions in these Regions. For example, Colonel Denis Pospelov, who had served in the city of Taganrog, was made the Chief Commandant of the city of Oktyabrskoye of the Belgorod Oblas [12]t. It is also known that his deputy, Denis Kalmykov used to be [13] the Chief Commandant of the city of Novoshakhtinsk under the auspices of the Regional Border Patrol Department of the FSB in the Rostov Oblast. These are just a few examples reflecting a broader trend.

To summarize, we have the following:
• The Russian Federal Security Service (FSB) employs operatives with an experience of re-shaping Kazak paramilitary formations into regular combat formations;
• These Kazak formations are being located along the border between Russia and Ukraine;
• The control of the Kazak formations is being centralized.

The events of the recent years have taught us that the above mentioned actions of the Russian strategists are in no way incidental.

InformNapalm [17] does not have any financial support from the government of any country or donors, the only sponsors of the project are its volunteers and readers. You too can help InformNapalm by making a charitable contribution through the Patreon platform [18].