The volunteers of InformNapalm international community observe a curious trend, when awarding a contract the Russian armed forces give preference to the candidates who served in the illegal armed formations of ‘Novorossiya’. One good example is Vladislav Pyatykh, a terrorist of the ‘Sparta’ gang as of January 26, 2016. On January 29, 2016, he was sent for military service on the contract basis to one of the Northern Fleet’s military units stationed in Murmansk city. 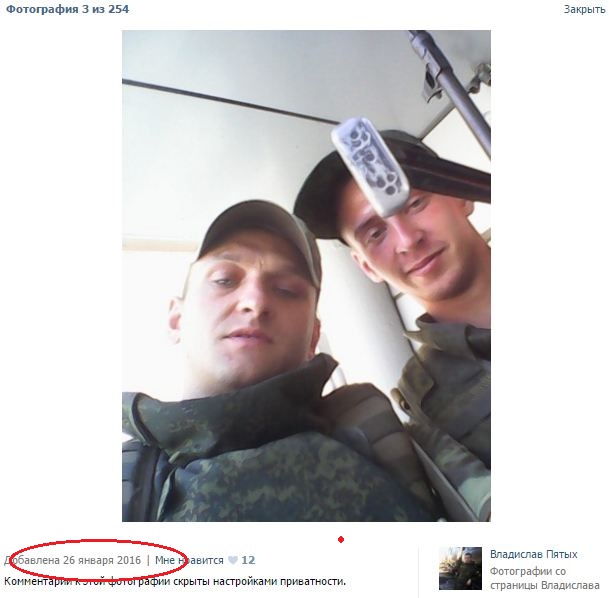 Personal data: Pyatykh Vladislav Vasilyevich was born on August 30, 1994. He is registered at Zolotukha village, Lev-Tolstovskiy raion, Lipetsk Oblast, the Russian Federation. Vladislav served in the Russian Strategic Missile Forces from June of 2013 until July of 2014. After the retirement from the conscript military service he briefly worked as a driver in the ‘De Bassus’ restaurant in Lipetsk. Since September of 2015, he is a terrorist in the ‘Sparta’ illegal armed group in Donbas.
Social networks info:
VKontakte [2] (archived profile [3], photo album [4] and contacts [5])
OK [6] (profile is not active since 2013).

He is listed in the ‘Purgatory’ [7] terrorist database of the ‘Myrotvorets’ center since December 22, 2015. It is noteworthy that Vladislav Pyatykh uploaded a screenshot [8] from the ‘Purgatory’ with his own data in his photo album in ‘VK’ on January 4, 2016.

During the routine monitoring of the Russian terrorists’ social profiles, new slides from January 29, 2016, were found in the Vladislav’s photo album. In particular, there are photocopies of travel documents [9] (so called ‘military transportation document’ and railway tickets) for route Ranenburg (Chaplygin station in Lipetsk Oblast) — Moscow — Murmansk, and also the precept [10] from the Lipetsk military registration and enlistment office No. 43 from the 29th of January, 2016. According to this precept, reserve soldier Vladislav Pyatykh was sent to the military unit in Murmansk for the service. 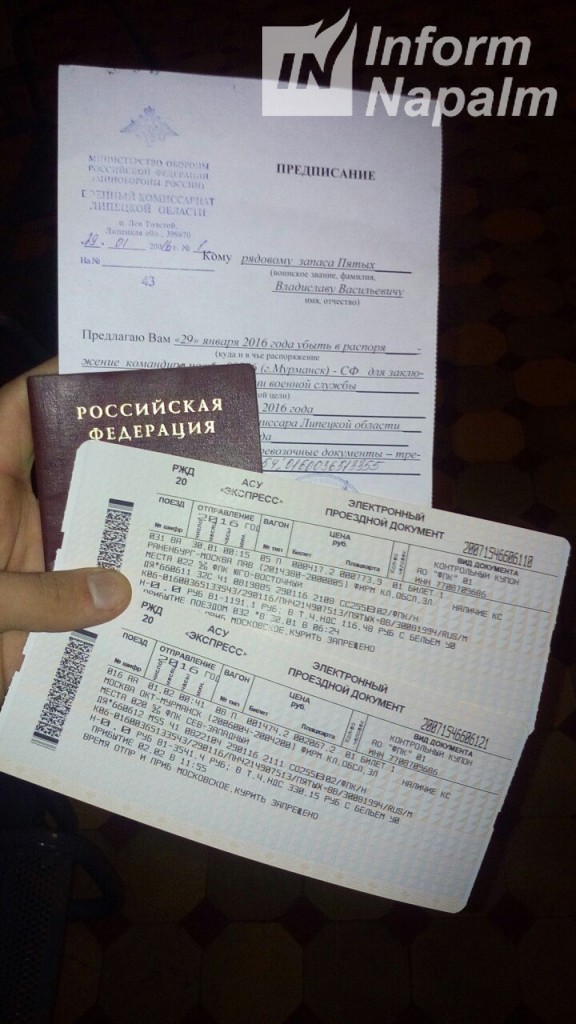 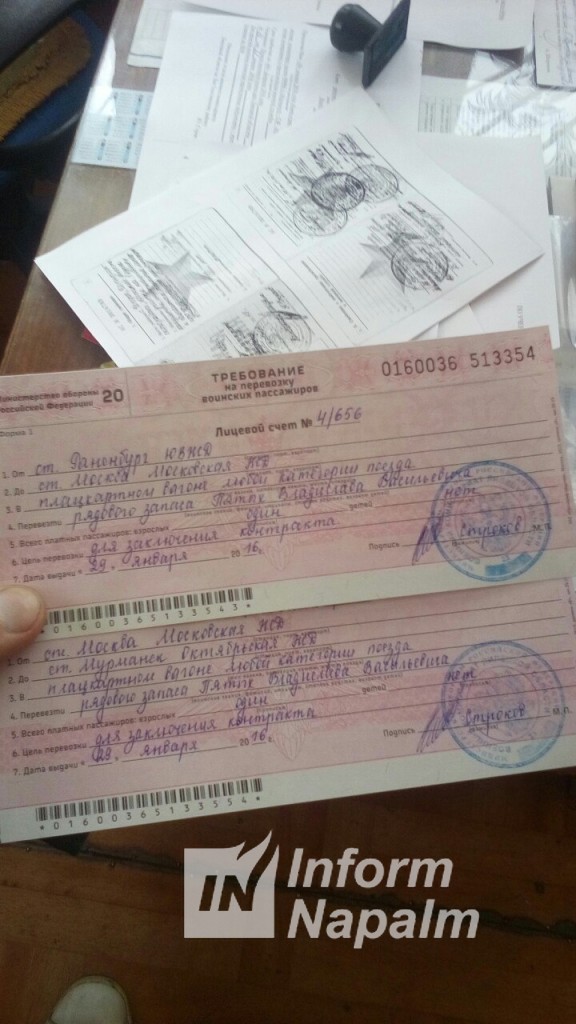 Among the other Vladislav’s photos, we should highlight a number of advertising and staged images, including the photo with Aleksandr Zakharchenko, the head of terrorists in ‘DPR’, and photos with the other terrorists from ‘Novorossiya’. 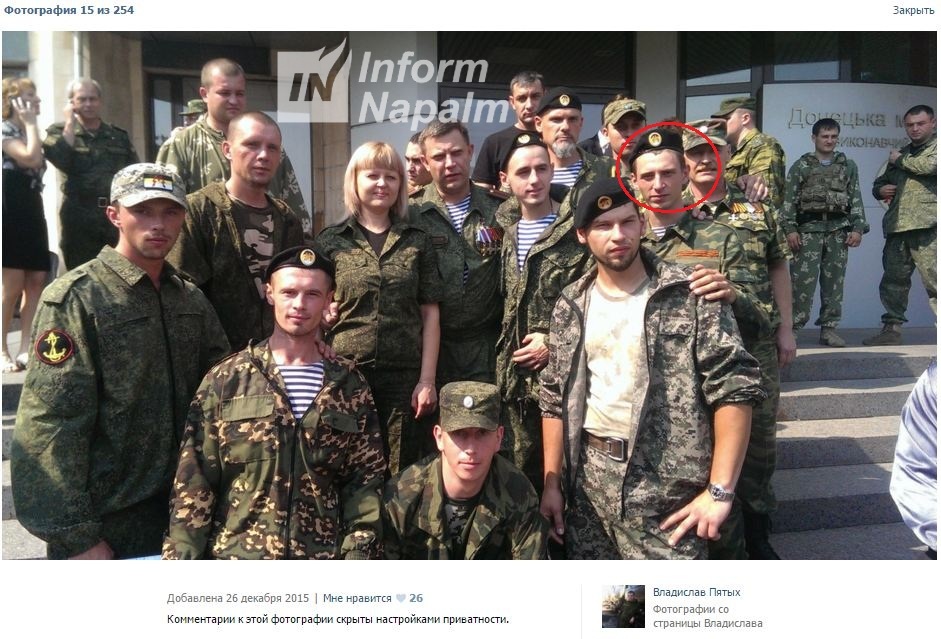 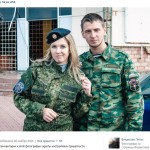 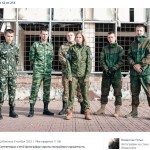 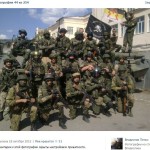 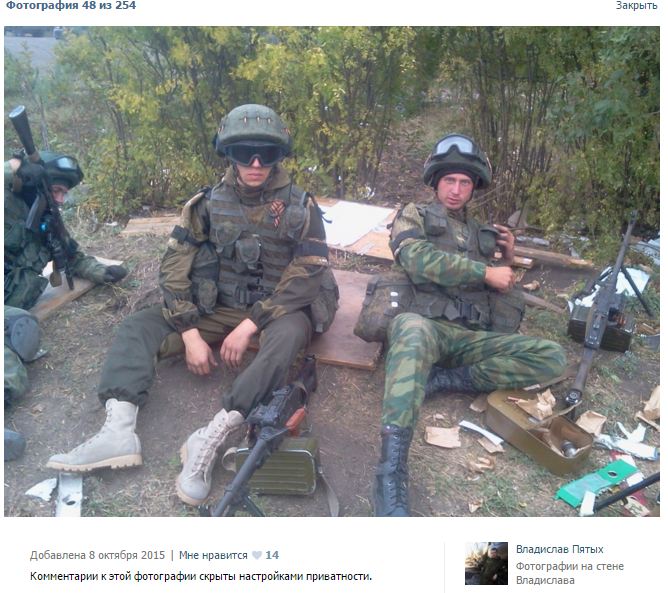 Considering the information above, the Russian military registration and enlistment office was aware that they were signing a contract with a terrorist who had already passed through the illegal armed groups of ‘Novorossiya’. Especially, that each potential candidate is tested for reliability by the FSB agencies. We cannot rule out, that ‘smell of powder’ (which was obtained in Donbas and can be used in other conflicts provoked by Russia) now may be one of the main requirements for the contract military service in Russia.