The International Joint Investigation Group (JIT), which is investigating the crash of flight MH17 in Donbas, has published [1] recordings of intercepted conversations of the leaders of Russian terrorists in Ukraine with senior Russian officials and military offices.

From the conversations it follows that the leaders of the Donetsk People’s Republic (DPR) terrorist group maintained close contacts with Russian officials regarding Russian military support. The conversations featured Alexander Boroday and Igor Girkin who held consultations with Sergey Aksenov, the “head of Crimea” appointed by the Russian side, and Vladislav Surkov, assistant to the president of the Russian Federation, Vladimir Putin.

In the published materials, as additional evidence, JIT refers to the first part of the e-mail dumps from the office of Vladislav Surkov published by InformNapalm volunteer intelligence community in 2016 and known as SurkovLeaks [2]. 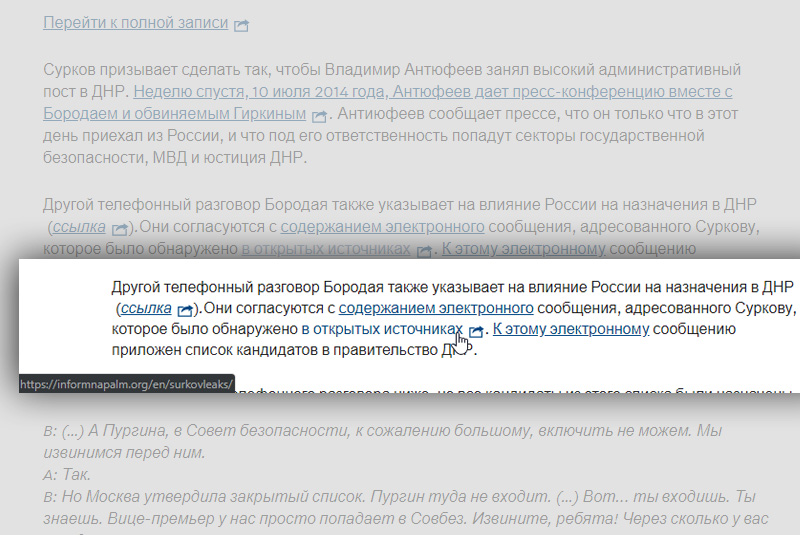 We also published the second [3] and third [4] parts of the correspondence under the common tag of SurkovLeaks.

In 2019 the British Royal United Services Institute published the report The Surkov Leaks: The Inner Workings of Russia’s Hybrid War in Ukraine which was prepared by the editor-in-chief of Euromaidan Press Alya Shandra and and member of the British Parliament Robert Seely. The report analyzed three mail dumps of the Kremlin officials, primarily of Vladislav Surkov, hacked by activists of the Ukrainian Cyber Alliance and made public by InformNapalm. These mail exchanges reveal the strategy and tactics of Russia’s subversive activities in Ukraine and its role in managing the politics and economics of puppet “republics” in Donetsk and Luhansk Oblasts of Ukraine. The report in English is available here [5].

[18]This publication was prepared especially for InformNapalm. Distribution and reprint with reference to the source is welcome! (Creative Commons — Attribution 4.0 International — CC BY 4.0)

InformNapalm [19] community is a well-known and fully independent international volunteer project that has been active for more than 5 years.
We do not receive any financial support from any governments or institutional donors. Our only sponsors are the community volunteers and readers who invest their efforts, their time and their money in counteracting Russian propaganda. You can also support InformNapalm community either with your knowledge and skills, by reposting our materials or by making a donation.

If you are willing to support us financially, please become a “patron” and sign up for a monthly mini-contribution through the Patreon network [20].