The guarantee of Israel’s security is not in the agreement with Putin, but in withdrawal of the Russian military forces from Syria.

Israeli Prime Minister Benjamin Netanyahu came to Moscow on a short visit in the middle of the Judaic festive week between New Year and Judgement Day — this was even noticed by president Vladimir Putin. There were substantial reasons for this visit. Apparently, deployment of the Russian military forces in Syria — the Israeli Prime Minister would not be in Moscow if it was not so — became a serious threat to the national security of Israel.

The day before this visit the ‘El Mundo’ newspaper wrote about the ‘nightmare’ of Netanyahu: drones register in Syria a column carrying Iranian rockets for Hezbollah. The Israeli aviation strikes killing several Russian servicemen by mistake. Putin falls into rage, a diplomatic crisis arises. Or even a gloomier scenario — a military collision between Israeli and Russian military servicemen.

However, this is not a nightmare yet, because an agreement preventing such collisions can be made. It is no coincidence that Netanyahu came to Moscow together with heads of the General staff and military intelligence and stated about the coordination framework establishment between Tsahal and the Russian military forces. Though the main nightmare is what remains beyond these agreements.

When Putin began invasion in Donbas, this operation was devised by him as a continuation of the hybrid war. There are no Russian military servicemen; there are just ‘guerillas’ and these ‘guerillas’ have modern weaponry up to the ‘Buk’ complexes capable to shoot down Ukrainian military aircrafts lest they eliminate the adversary groups. Who would think that one of the ‘Buk’ complexes would shoot down a Malaysian liner? Even Putin could not predict such course of events. Just the ‘monkeys with hand grenades’ got the latest weapon, in particular – ‘Buk’ missiles. The result is known. And the reason is known too. It lies in the absence of what is considered in civilized world as ‘state’. Israel is a state. Russia is not a state. Putin can make any decision, but it will be ‘corrected’ by the lack of discipline, disorganization, stupidity and corruption of the bureaucratic and military machine. 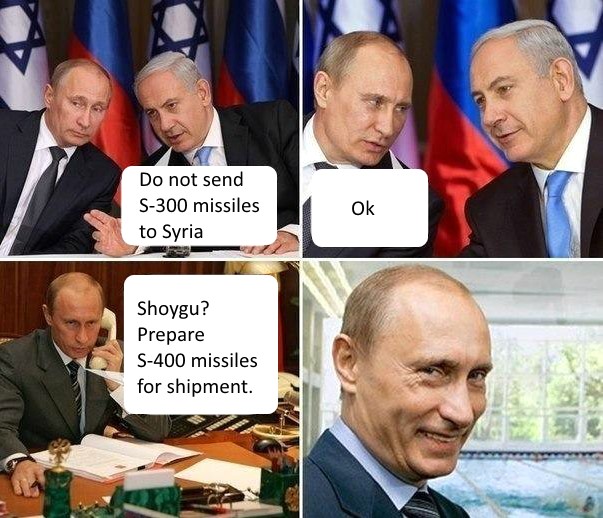 The basics of the Russian diplomacy

That is why there is no need to doubt: if modern Russian weaponry starts getting into the hands of Bashar Al-Assad, sooner or later — rather sooner — these arms will come to hands of Hezbollah and other radical groups. Something will be bought, something will be stolen, and something will be gotten unofficially directly from Putin who wants to reach the status of the Middle East ruler. And sooner or later the gun that Putin puts on the Middle East’s wall, will shoot. It can’t fail to shoot. It will shoot at Israel.

That is why the Israeli politicians or experts who state that the security of the Jewish state is connected with the necessity to reach the coordination of Putin’s actions for the preservation of Assad’s regime as ‘the most adequate one’ lie to themselves, to their countrymen, and to the rest of the world. Because it is quite possible that Assad’s enemies are less adequate, but they don’t have the modern weapons that Putin decided to bring to Syria. They just don’t have it. Whereas Assad has or will have it. And Hezbollah will have it soon. And other radicals will have it — everything is easily bought and sold in the Middle East.

That is why the guarantee of the security of Israel and other countries of the region is not in the agreement with Putin, but in withdrawal of the Russian military forces from Syria, with or without Assad. And in the moratorium on the shipments of modern arms to the sides of the conflict, which is definitely not followed by Putin.

Otherwise we will find ourselves on the edge of a big war or at least a big tragedy. This will be a much more serious tragedy than the loss of the Malaysian Boeing.