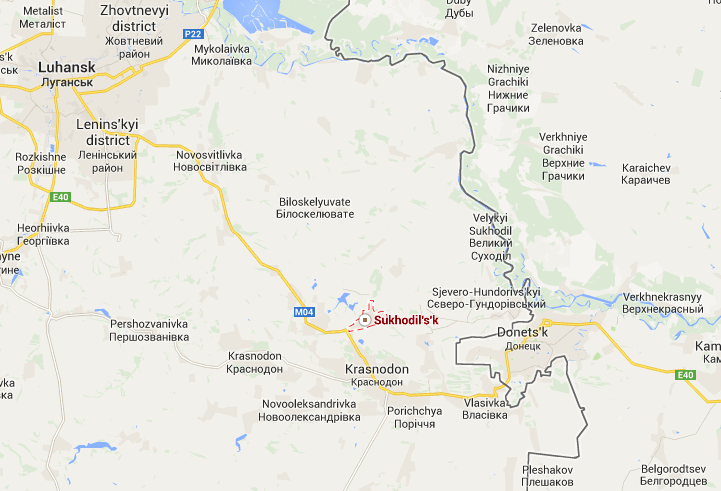 Another convoy of armored vehicles from the territory of the Russian Federation has entered Ukraine (passed through Sukhodilsk, Shoseyna Street).

Early this morning, on July 31, a large convoy of armored vehicles, about 50 units (this is no exaggeration) passed through the town of Sukhodilsk, Luhansk region. According to our local sources, “We haven’t seen anything like this before, convoys have passed through before, but in much smaller numbers.”

Judging from this, we can already say that Russia brought its troops into Ukraine without a declaration of war. In our previous reports, we warned about the urgent need to block the border in the Krasnodon area and the surrounding villages. This should be done not only in the area of the Izvaryne checkpoint where the OSCE representatives‪ may still be present, but also in the villages ‪of Parkhomenko, Popivka, and especially in the village of‪ Sjevernyi.

It is necessary not only to regain control of the highway through the village of Novosvitlivka and Novohannivka (before Luhansk), but also to secure our positions at this locale. A simple checkpoint of Ukrainian Armed Forces / National Guard will not help against such large convoys. This is no longer an ATO, not from a long time ago, but an undeclared war.

Locals express bewilderment and sharply criticize the security command. For a better understanding of the situation, below is the direct speech of one of the locals who daily observes the influx of equipment from the‪ Russian Federation:

“It seems that our top security officials are interested in a protracted massacre since they don’t intend to block this source (note: Sukhodilsk, Sjevernyi, Popivka, and Parkhomenko) of daily passage of equipment from Russia for the third month in a row! This is an endless stream of reinforcements for terrorists! How can we reach and give a shoutout to the top?! We cannot call the phone numbers posted on their websites — they are being wiretapped. People keep writing and warning, but the ministers have zero reaction, and they probably don’t report to the President about such blunders, shaking in their office chairs, while the children are dying! And then they will again wonder where the tanks, APCs, Grads, Acacias, and vehicles with shells and mercenaries come through?!…”

We would like to emphasize immediately that this is not the only message about the equipment convoy consisting of 50 units passing through this area today. Moreover, there is information that this convoy is preparing to attack the ATO forces…

Together we will win! Glory to Ukraine and death to its enemies!

This is the video of the convoy: