Volunteers of InformNapalm [1] international intelligence community received an exclusive visual proof of the reports about the first official sighting of the Russian 51U6 Kasta-2E1 radar station in the occupied part of the Ukrainian Donbas. In this feature, we will supplement the OSCE report with additional information and facts.

Russian radar station of this type was first discovered by the OSCE observers on the footage from a mini UAV. Text information about the sighting was published in the OSCE Special Monitoring Mission (SMM) daily report 38/2021 [2] dated February 17, 2021. It indicated that a 51U6 Kasta-2E1 target and acquisition radar was spotted on February 15, 2021 in a training area near Buhaivka (37km south-west of Luhansk) in the temporarily occupied territory of Ukraine controlled by Russian hybrid forces. It was also indicated that the station was located 30 km from the contact line. 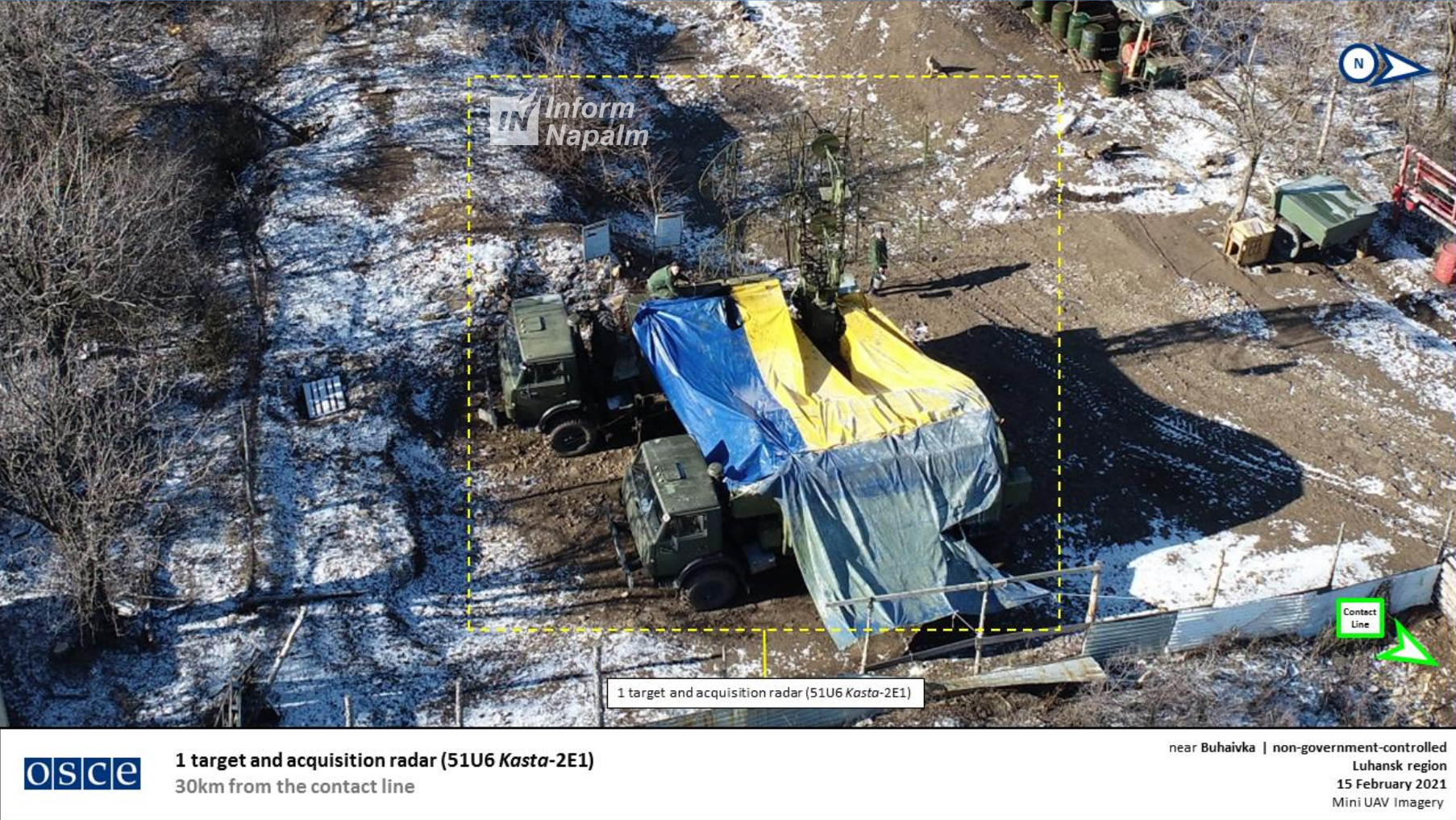 Hiding in plain sight*, under the flag of Ukraine

The photo shows that the Russian servicemen** operating this radar station in the Donbas, having seen the mini UAV of the OSCE SMM, are hastily trying to disguise the equipment, covering it with tarpaulin or film in the blue and yellow colors of the state flag of Ukraine. It looks like a ploy to mislead the observers and hide the Russian origin of the 51U6 Kasta-2E1 radar. It is ironic that on the positions of the Russian occupation forces in the Donbas lacking conventional camouflage nets, there were materials for “quick Ukrainization” ot the equipment. It could also have been a “ruse of war” of some resourceful commander.

* In 2015, the Atlantic Council think tank published the report [4] titled “Hiding in plain sight: Putin’s war in Ukraine”. The report appeared in 5 languages presenting irrefutable evidence of the Russian Armed Forces being deployed in the territory of Ukraine. The official translation of the report into Ukrainian [5] and Russian [6] was made by volunteers of InformNapalm. The materials of InformNapalm volunteer intelligence community were also included and credited in that investigation.

** Findings of numerous OSINT investigations by InformNapalm, which were systematized into the world’s largest open database [7] with the facts of deployment of the Russian equipment and servicemen in Ukraine, strongly suggest that advanced military equipment, such as electronic warfare and radar systems, are operated and maintained in the Donbas exclusively by well-trained career military personnel from Russia.
In the above photo from the OSCE SMM UAV, there are information stands near the equipment and fire racks, a clear sign of a professional military organization with proper logistics processes.

Establishing of coordinates and geolocation of the site

Let us consider some screenshots for visual comparison and justification. 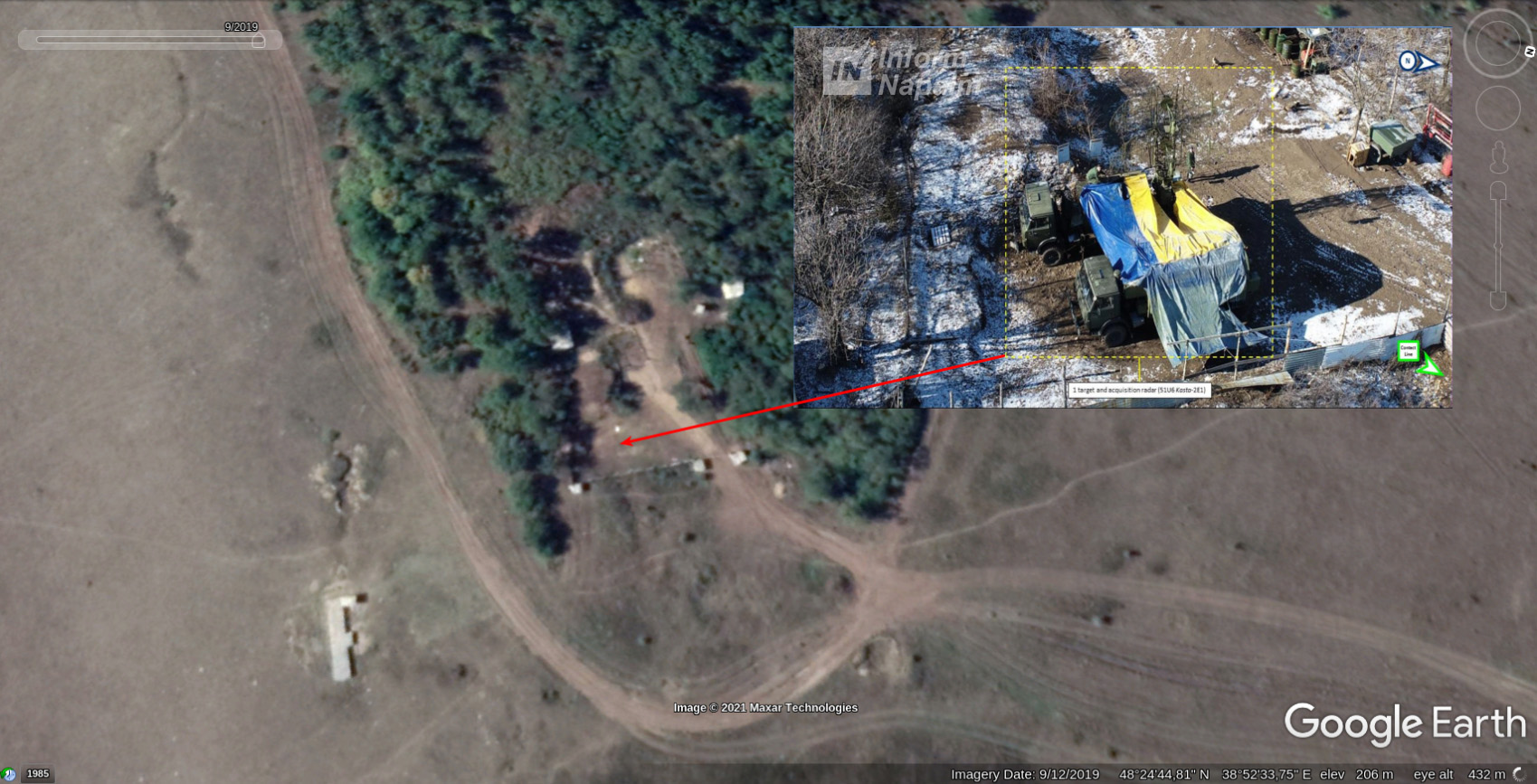 Satellite images for 2018 of the same area also show barrels of diesel fuel stored there, as well as unidentified military equipment nearby covered with a camouflage net. 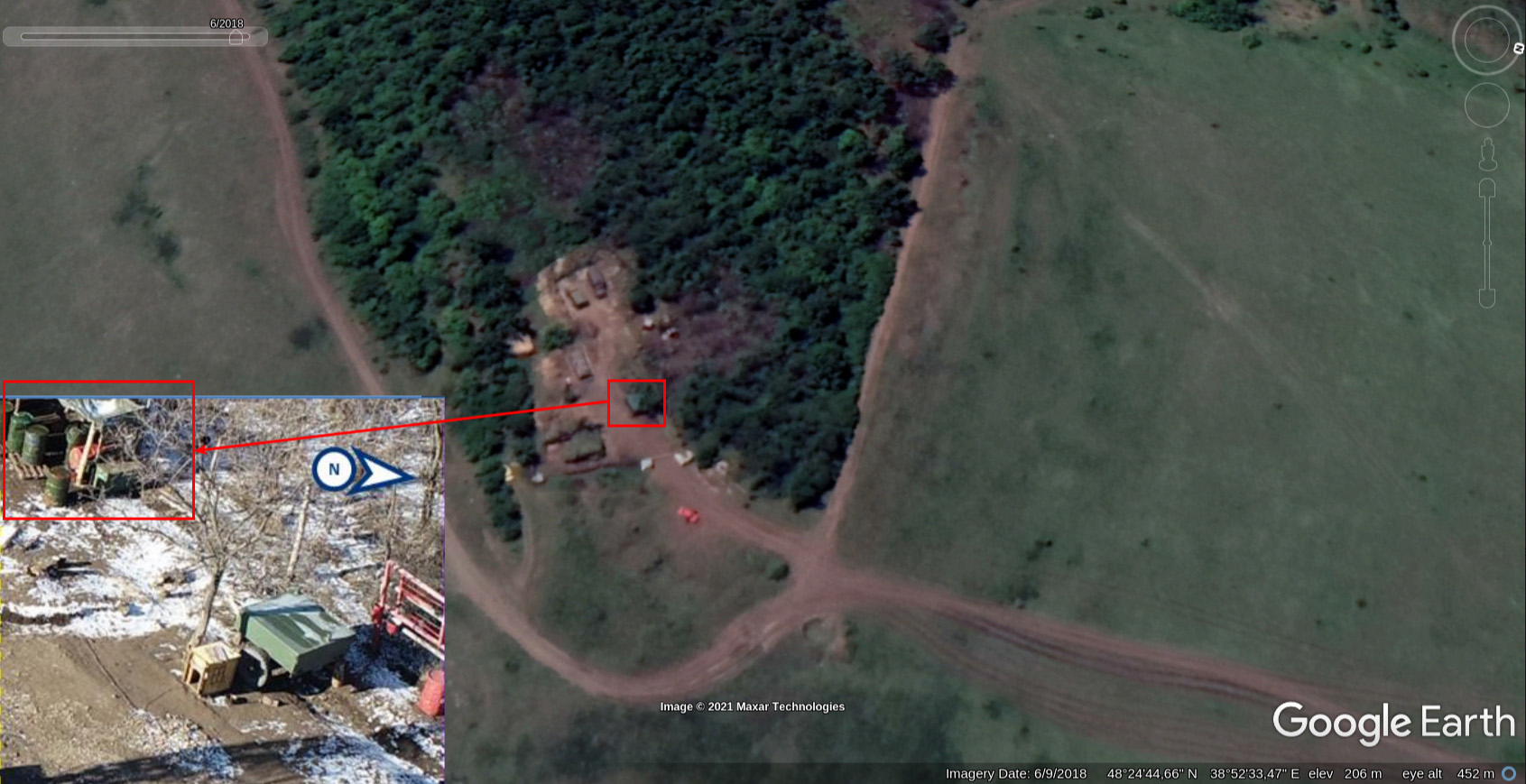 Russian 51U6 Kasta-2E1 against UAVs

It is worth noting that the Russian mobile UHF-band radar station 51U6 Kasta-2E1 is designed specifically to detect airborne targets, including those flying at ultra-low altitudes. As Ukraine does not deploy any air power in the Joint Forces Operation zone, the station was apparently deployed specifically to hunt for UAVs.

In October 2020, InformNapalm presented conclusions based on intelligence data and pointed to signs of preparations [12] for an escalation of hostilities in the Donbas. Some facts indicated that the Russian hybrid army was probably preparing defenses against Bayraktar TB2 strike UAVs. Apparently the deployment of the Russian 51U6 Kasta-2E1 radar on the occupied territory is an attempt to take into account the recent experience of Bayraktar TB2 strike UAVs combat deployment during the hostilities between Azerbaijan and Armenia.

The 51U6 Kasta-2E1 radar system includes the following vehicles:

The station crew consists of 6 servicemen.
Illustrative photo of 51U6 Kasta-2E1 radar from bastion-opk.ru: 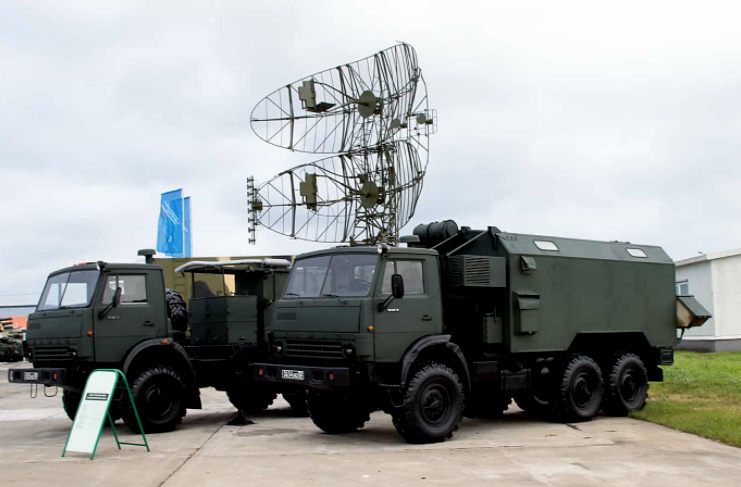 The station can operate for up to 20 days in continuous run mode. Target detection radius – from 5 to 150 km, altitude – up to 6 km.

51U6 Kasta-2E1 radars were produced from 1989 to 2003 at the facilities of the Murom Radio Measuring Instruments Plant in the Russian Federation. Such systems were not supplied to Ukraine either before, or after the collapse of the USSR, therefore spotting of this equipment in the Donbas makes another irrefutable proof of the aggression of the Russian Federation against Ukraine. InformNapalm database [7] contains facts about more than 50 types of Russian weapons and military equipment that could not have been captured in combat and were secretly supplied to the Donbas from the Russian Federation. These recent findings provide yet another confirmation that Russia fully controls, supplies and directs military operations in the east of Ukraine.

Escalation in the Donbas and remote mining

According to the press center of the JFO [14], on February 23, 2021, Russian hybrid forces once again cynically violated the ceasefire and, in addition to shelling the positions of the Ukrainian Armed Forces with prohibited weapons, opened fire on the Vilny Khutir village in the Luhansk Oblast. Russian invaders shelled the civilian areas with tripod-mounted anti-tank grenade launchers, and also carried out remote mining of the territory of the settlement. As a result, a civilian man died of multiple wounds from a mortar that exploded in his yard.

The hybrid Russian military aggression in eastern Ukraine was a continuation of the operation to seize and occupy the Ukrainian Crimea. It also diverted the attention of the world community from the Crimean issue. Every escalation in the Donbas further overshadowed the occupation of Crimea in the memory of the international community, although both of these military campaigns are components of Russia’s overall undeclared war against Ukraine.

[16]The publication was prepared by Roman Burko and Mikhail Kuznetsov. Translated by Artem Velichko. Distribution and reprint with reference to the source is welcome! InformNapalm materials are available under a public license Creative Commons Attribution, CC BY [17]. The condition for using our materials is a hyperlink to the original source in the first or second paragraph of your publication. InformNapalm social media pages:

[20]InformNapalm [1] does not receive any financial support from any country’s government or large donors. InformNapalm.org website is supported solely by the community volunteers and our readers. You can also volunteer or support the development of the unique volunteer intelligence resource InformNapalm with your donations through Patreon [21].