In addition to the use of large quantities of weapons, servicemen and mercenaries, the Russian aggression in Ukraine is remarkable in its sophisticated and coherent media terrorism system. The Russian hybrid war by its design needs more and more new reporting that aims to discredit Ukrainian military and law enforcement agencies, to make people living in the occupied territories of Luhansk and Donetsk Oblasts think of them as “Ukrainian punishers” instead of protectors and liberators of their own land. At the same time, propaganda measures contribute into confusing international observers, creating a smokescreen of distortion or outright lies. This is why on October 10, 2016, the European Parliament Committee on Foreign Affairs passed a draft resolution that compared the actions of Russian media to ISIS terrorist propaganda. However, Russian media terrorism goes much further than just twisting of the facts. Russian media are cooperating with terrorists to effectively organize newsworthy events for the sake of propaganda. In 2014 there was a dark joke in Luhansk: “If you see LifeNews journalists anywhere close – run away fast!” Russian journalists had an uncanny ability to “predict” shellings and show up close to the scene a few minutes before a tragedy would happen and people start to die.

In December 2016 Valery Bolotov, former LPR leader, claimed that during active fighting in 2014, terrorist battalion Zarya (at that time lead by the current LPR leader Ihor Plotnytskiy) shelled the territory of Luhansk, which was under their own control, for the sake of media provocation [2]. The terrorist leader’s claim caused a row among militants, with some of them angrily accusing Bolotov of lying, while others confirmed the facts of “strange” shellings of the Donbas cities.

This and many other eyewitness reports demonstrate how Russian as well as LPR/DPR media work in concert with the terrorists. The escalation of fighting in the area of Svitlodarsk salient in the second half of December 2016 was accompanied by the new wave of such operations. Here, we will discuss two examples of such media terrorist attacks.

Shelling of the residential areas in Debaltseve

Lugansk Information Center, an outlet controlled by militants, recently published a series of materials claiming that Ukrainian Army shells the units of LPR Peoples Militia trying to force them out of their positions in Debaltseve.

On top of that Russian propagandists published a photo and video of two cases of buildings hit in a residential area. Although the magnitude of the shelling can hardly be compared to the relentless pounding of Ukrainian Novosvitlivka by the Russian occupants or to the destruction of Syrian Aleppo, this kind of provocations all the same benefit only Russian propaganda, which jumps on such events to vilify Ukrainian Army.

InformNapalm volunteer intelligence community took interest in this story, as we spotted several inconsistencies in the official version spun by the militant-controlled media.

The address of the shell hits was recorded as: Kurchatova St in Debaltseve, garages between buildings 9 and 11. In this video [3], News Front channel shows the shrapnel damage on the front side of building #9, but does not show burst craters. 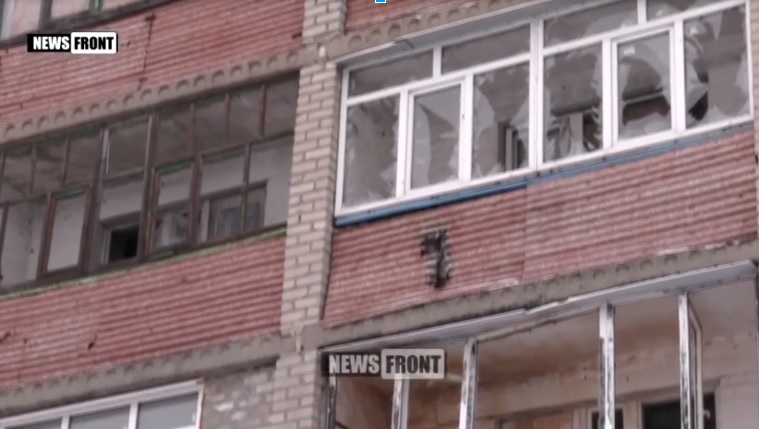 They show us only one impact point – garages between buildings 9 and 11. 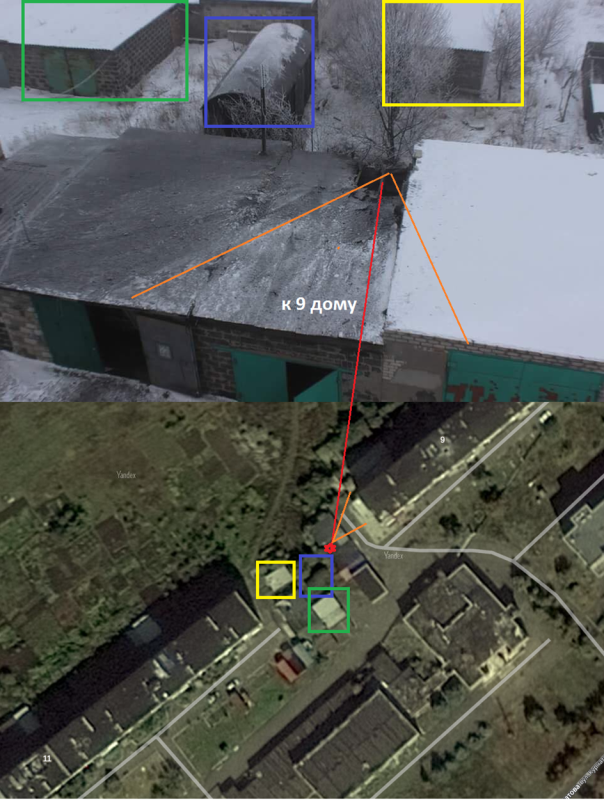 The shell detonated on the garage roof punching a hole in the roof slab, but not deforming the beams or damaging the end wall of the neighboring garage. 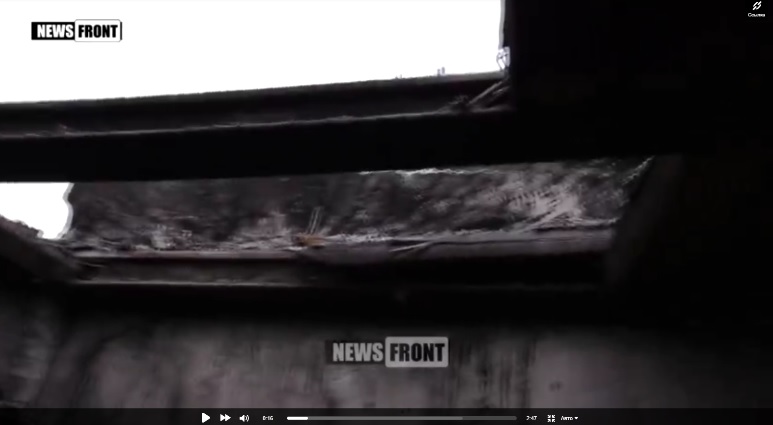 There are no blast traces below the beams as well. The hole was apparently blasted by the detonation, the roof was not pierced by the weight of the impacting shell. It shows that it was a small-caliber ammunition (e.g. a 82 mm mortar round), and it must have been fired at short targetable range: 3-4 km. The Distance from Debaltseve to the closest positions of the Ukrainian Army is approximately 12km or more in the northern and north-western direction. 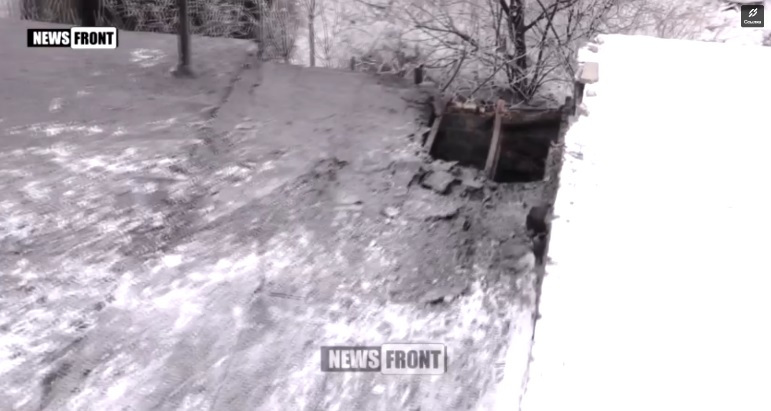 The fragmentation dispersion pattern is visible through the traces on the roof and is directed towards building 9. It means that the mortar round most probably came from the west or south west where there are no Ukrainian Army positions within any reasonable range. 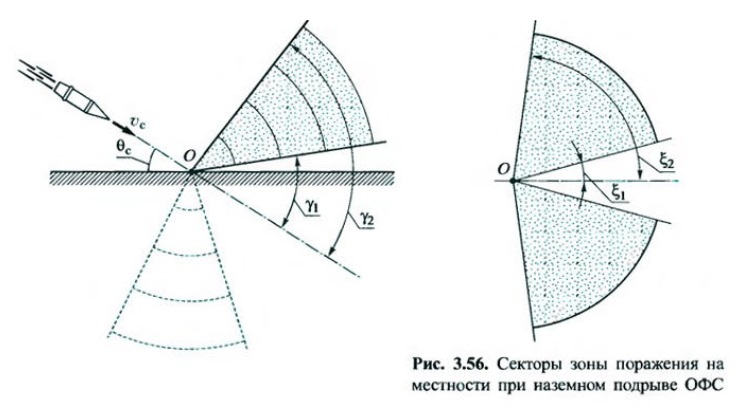 Another news story was dedicated to a private house in Novohryhorivka. 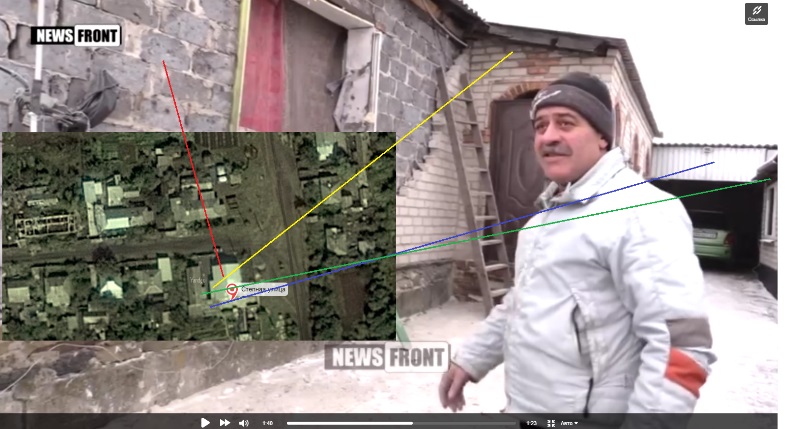 Militants did not take international OSCE observers there, there were only Russian propagandists and “peacekeepers” on the scene. The man claiming to be the house owner, says on video that he saw the black dot of the ammunition flying towards him, pointing at the direction where the round was shot from. We have to note that it is next to impossible to see ammunition coming on. And if an incoming round is spotted, it would definitely not be possible for a spectator to hide because of the short time it takes for the round to reach its target. So, we can confidently conclude that the man lies.

The character of the damage to the house is strange. There is no crater and no massive bricks debris in front of the house, although a big portion of the outer brick layer of the wall has been torn away. The round must have pierced the wall close to the right lower corner and was directed down and inside the house, judging by the inner brick driven inside by the impact. Why then is the apex damaged? 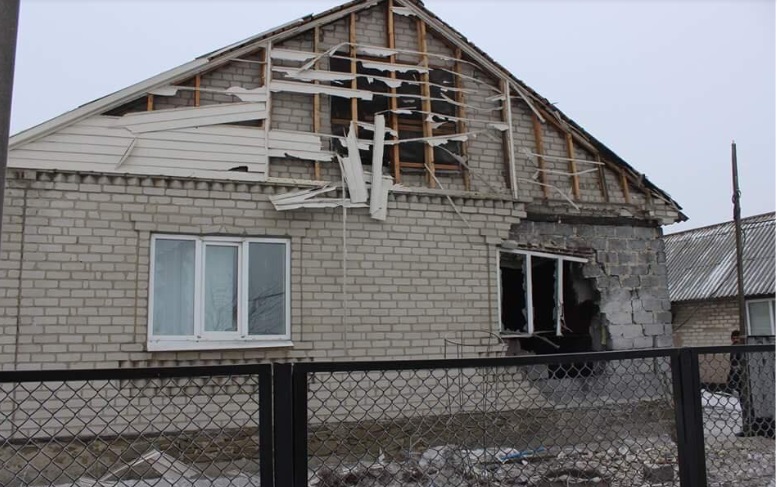 And inside the house there are no real traces of the blast. Nothing is scorched, no heavy damage caused by fragments. Traces of fragments are only visible on the ceiling in front of the window. 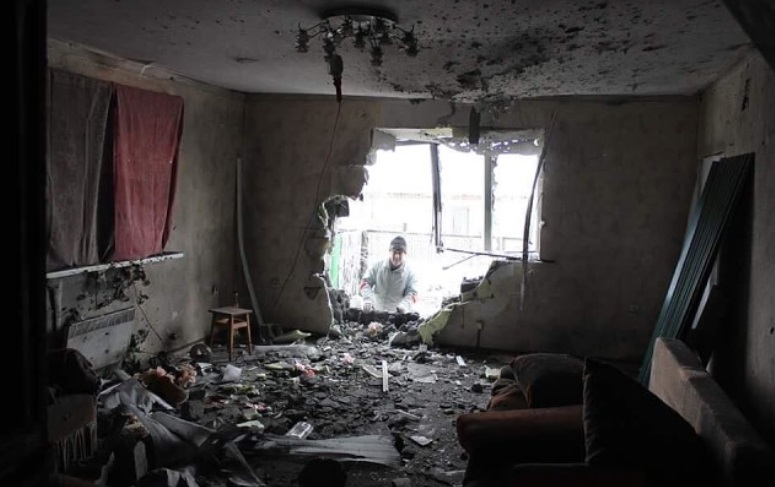 From the dialog with “the owner” it follows that the house had been damaged before, and it is unclear if there was a recent shell or if the old damages are shown as recent.

A Russian officer from the Joint Center for Ceasefire Control and Coordination (ed.: Russian-Ukrainian military monitoring group, cooperates with the OSCE SMM) takes part in the falsification: he takes the north bearing with no compass. His bearing differs about 30 degrees from the true north direction. 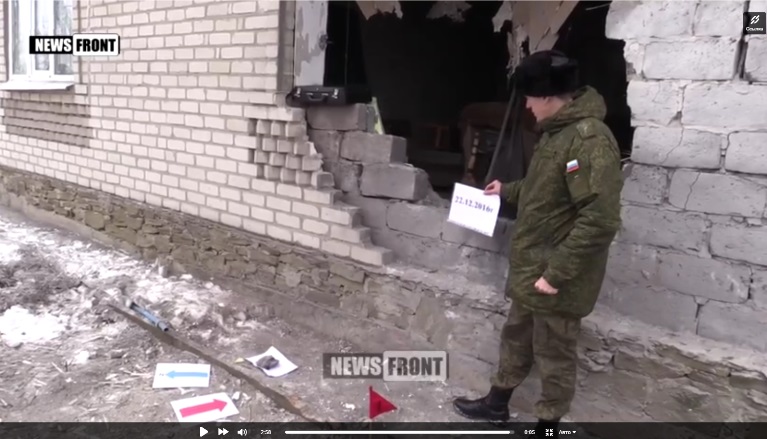 The arrow allegedly pointing north is close to the angle of 45 degrees with the house wall. However, the north direction deviates just a few degrees from the perpendicular line. But it matters not to the Russian “peace keepers”. Their only goal is to convince the audience that this SINGLE and USELESS round was shot from the Svitlodarsk salient. 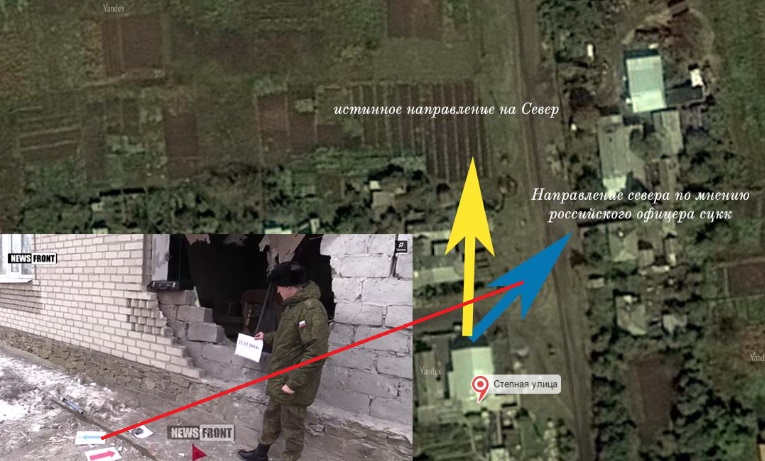 Russian “peacekeepers” do a great job of keeping to the aggressor’s propaganda line.

Then the video demonstrates a large piece of a shell, but we can’t see where it came from. 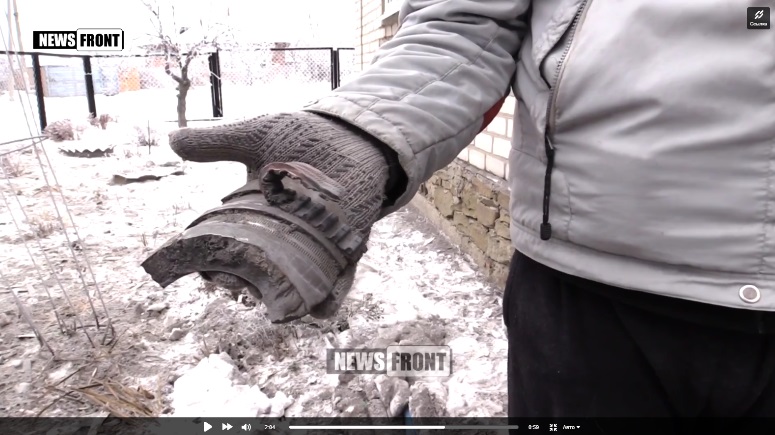 It is changing hands. 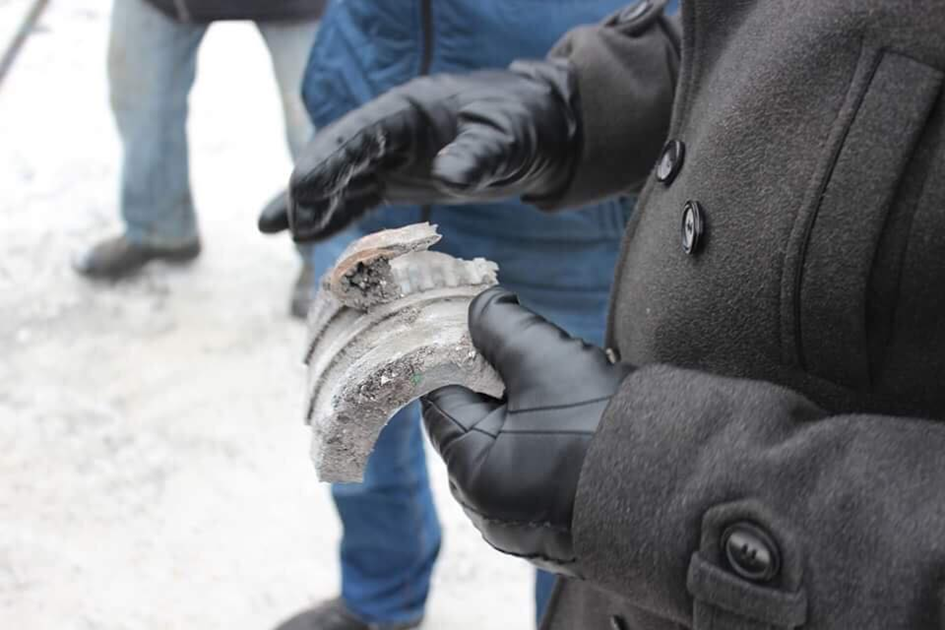 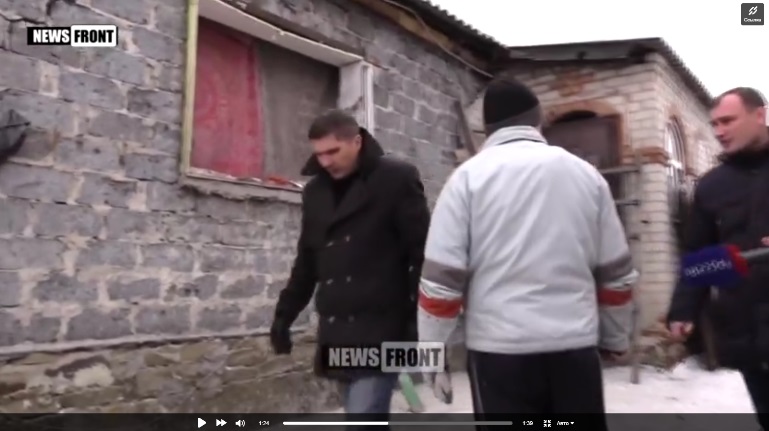 The fragment bears no traces of explosion, just an edge chipping. It means that the ammunition probably did not explode, or was shot unfuzed. We can estimate the ammunition caliber at approximately 100mm or more.

There are clearly visible closely spaced wide grooves of the rifling lead on the fragment. This description fits only a few types of rounds:

It can be used for:

All the later videos of other shellings, feature craters made by small caliber ammunition with effective range of 3-4 km (judged by the crater size). 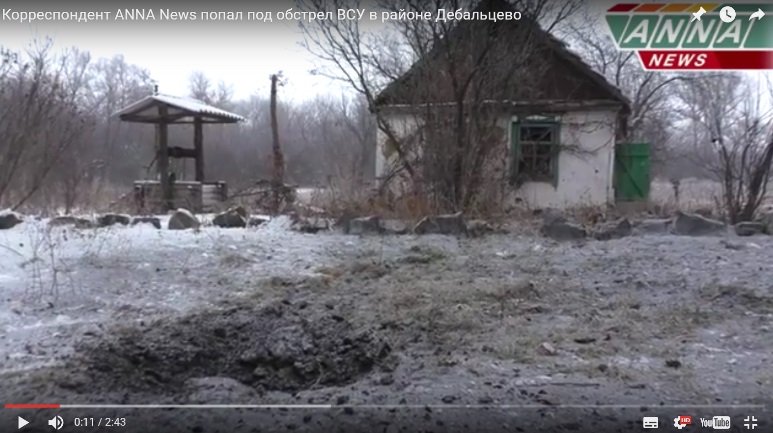 Shelling of a church also ideally suits the concept of the “Russian world” – the protection of the Russian-speaking people, of the Orthodox Christian faith. All the staples of the Russian media terrorism. 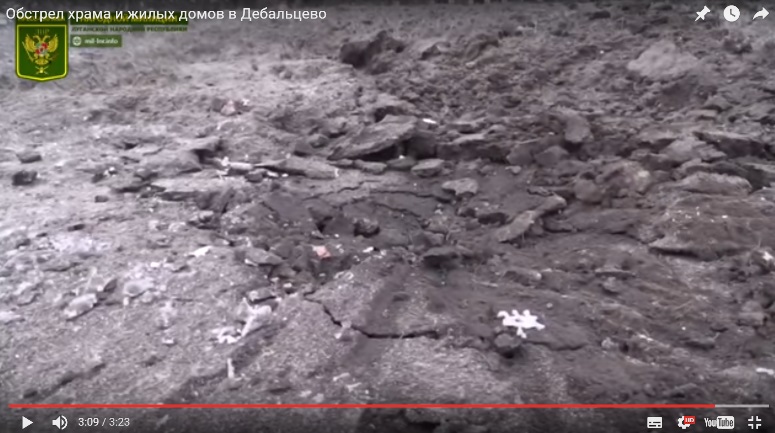 All the above raises the question of professional fitness of OSCE observers. Are they competent and impartial enough to investigate the shelling taking into account all possible manipulations? In this case, it looks like every visual observation and its documenting is treated like a hard fact of shelling, with responsibility put on the Ukrainian side. It definitely benefits Russian propagandists and their boss in the Kremlin.

This publication was prepared by Dmitriy K. and Andrew Lysytskiy [7] especially for InformNapalm, translated by InformNapalm English [8]

[9](CC BY 4.0) This information has been specially prepared for InformNapalm.org, an active link to the authors and our project is obligatory for any reprint or further public use of the material.