During summer preparation and autumn active phase of the Zapad-2021 [2] InformNapalm published several articles with intelligence and analytical data about the Russian exercises, redeployment of the military personnel and equipment. In the context of our materials, here is the overview by Pavel Felgenhauer that supplements our investigations and probably will be of interest to the international intelligence community.

Zapad-2021 military exercise finished with the epic “main stage show” in the Mulino training grounds (Nizhny Novgorod oblast) which deployed tanks, airborne forces and abundant pyrotechnics in the presence of the President Vladimir Putin. A Belorussian infantry battalion (400 people and hardware) and symbolic contingents from Armenia, India, Kazakhstan, Kyrgyzstan and Mongolia, together with representatives from Uzbekistan, Pakistan and Sri Lanka were also brought to Mulino. There were many journalists, Russian and foreign. There were observers from various countries – for the most part, they were military attaches accredited in Moscow. However, not a single representative of a diplomatic corps of NATO countries was invited to Mulino. There were only “neutral Europeans” from Austria, Serbia, Finland, Switzerland and Sweden. This openly unfriendly gesture which is in outright contradiction with the current OSCE Vienna document unpleasantly surprised diplomats accredited in Moscow and underlined once more the uncovered hostility between the West and Moscow. 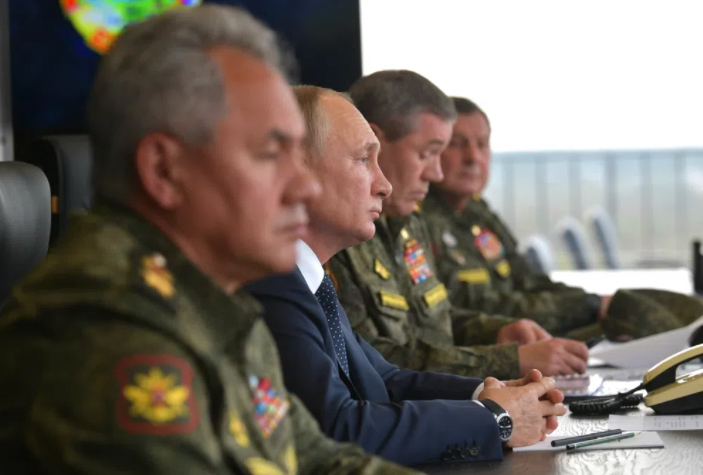 According to Deputy Defense Minister, the “innovative system of financing the army in the wartime” was tested during Zapad-2021 military exercises. The new system must ensure the interaction of territorial departments of the Federal Treasury, field departments of the Bank of Russia and commercial banks to provide the personnel with payments “in Russian rubles as well as foreign currency” in various conditions. This is a very serious part of preparations for real military operation.

And it left the West guessing which currency is being prepared, i.e. where the Russian army is going to be deployed: will they get euros or Norwegian kroner, Polish zlotys, dollars and pounds or rather Ukrainian hryvnias and Belorussian rubels?

As they say, follow the money to understand the real intentions.

Mulino is a garrison town built by German builders for withdrawal of the troops from the former GDR; it has a training range and disciplinary battalion. In 2014, a €100 million contract with German company Rheinmetall AG was signed to build in Mulino the most modern computerized training ground in Russia called the Training Center for Ground Forces. But it was canceled because of Crimea and the Donbas; many military units and formations, including regiments of the 3rd Motorized Rifle Division were withdrawn from Mulino and redeployed in Voronezh Oblast at the Ukrainian border.

Any flying, crawling and shooting weaponry including drones and other modern means of target designation were showcased in Mulino in the final stage of Zapad-2021. But what most impressed the public were reports that the first reconnaissance and fire support robots (Uran-9 and Nerekhta) together with Uran-6 robotic demining systems were used in the combat formations of the combined arms units.

Israeli and American surveillance and strike drones made the real revolution in the methods of warfare in the last 30 years, having almost completely replaced traditional photographic air reconnaissance. Other countries are trying to follow the leaders but, in case of Russia in particular, not very successfully. Thus, there are lots of publications reporting about new wonderful domestic surveillance and strike drones which are about to dominate the war fields but those are no more than prototypes or limited editions. There are problems with the reliability as well as with the network-centric combat control, tracking and computer modeling system, which is necessary for effective use of modern drone capabilities. An accurate indicator of serious problems: not only the reliable and proven Forpost (Searcher-2) Israeli drone (developed 30 years ago and supplied to many third-world nations) is still being produced in Russia, but also the localized Forpost-R, remodeled from the purely surveillance to surveillance and strike role has been developed and is being purchased by the army. However, payload capacity of Searcher-2 is not very suitable for this task.

The source of the problems is obvious: without modern western technologies, components, elements and materials and in the conditions of forced sanctioned autarky the wreckage of the Soviet military industrial complex is not able, with rare exceptions, to support serial production of reliable modern military equipment.

Re-equipment of the Russian Army is for the most part modernization of Soviet tanks, planes etc. using old technology. And suddenly there is a breakthrough – real military robots.

Telecontrolled tanks were produced in the USSR back in the 30s, however, they were considered useless. Nazis deployed remotely controlled tankettes, in particular, to suppress Warsaw Uprising in 1944. Israeli Defence Forces supposedly deployed military ground drones during Operation Cast Lead in Gaza in 2008-2009. Russian military robots were supposedly used in Syria, probably, also in the urban warfare. That is, ground military robots are a specific and not very new kind of weapons. Apparently, they alone could not significantly change the balance of power in a combined arms battle. It makes no sense to expect from them a revolution in warfare. Deploying remote ground military “robots” in the show in Mulino is indeed only a publicity stunt. As is to say, although there is a problem with air drones, here’s another wunderwaffe to make you happy. 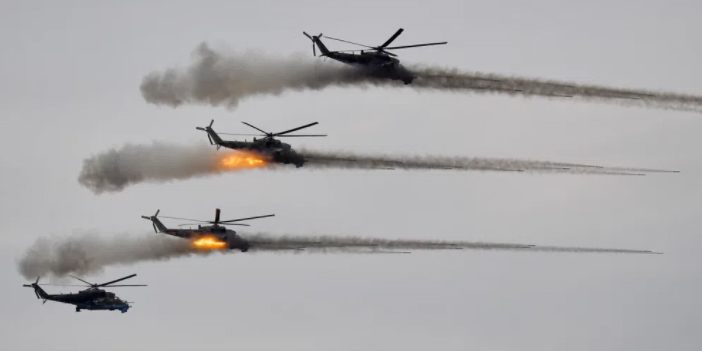 As Zapad exercises traditionally are jointly held together with Belarus, Putin and Lukashenka would normally jointly close the exercises in one training range. That was before, but not this time. Lukashenka and Deputy Defense Minister Yunus-Bek Yevkurov watched the demonstration of combined training battle at Obuz-Lesnovsky training range not far from Baranavichi in the West of Belarus, more than a thousand kilometers from Mulino. There were much less pyrotechnics and smoke at Obuz-Lesnovsky, no military robots, and no foreigners. Although, Lukashenka had invited everybody including NATO members and then complained:

“They did not come deliberately, that’s their small-minded position, mad position”.

Lukashenka’s regime has always relied on the Ministry of Internal Affairs and KGB, and consistently reduced military expenditure. Conscript army of Belarus is very small. There are 16,500 servicemen, only two fully armed and staffed infantry brigades and two more reduced (understaffed) ones. Special Operations Forces consist of 6,000 personnel and three brigades: paratrooper, air-assault and special forces. On the other hand, Internal Troops consist of six brigades; one of them is a special operations force. It was them, who, together with local KGB, defeated the opposition and suppressed protests following the presidential election on August, 9, 2020. The Army was not even engaged.

Defense of Belarus is based on the principle of mobilization and militia: the small conscript army of the peacetime to be reinforced with the 30,000 trained reservists, and 120,000 territorial defense militiamen. It is cheaper.

Now any significant mobilization is a danger for Lukashenko, as it means arming the people half of whom hate the dictator.

Lukashenka’s regime is plainly weak in all senses – financial, economic, political and military; and it is of less and less interest to anybody.

Read more: Beginning of Zapad-2021 maneuvers and the deployment of Russian Su-30SM fighters to Belarus [4]

Belarus inherited the Soviet mobilization system with all its armament and weaknesses. At the same time Russia in the 10 years of reforms, has developed a completely different kind of regular army – the biggest in Europe, capable of rapid deployment and fighting in conflicts of any level, practically without reservists. There are more than 130 pre-formed and combat-ready tactical battalion groups in the Russian army. That was the army demonstrated to Putin and the journalists in Mulino. The scope of Zapad-2021 is staggering. According to official data, almost 200 thousand staff, 80 planes and helicopters, 16 ships, 290 main battle tanks, multiple launch rocket artillery systems, etc. took part in the maneuvers.

Although Zapad-2021 is the most hyped military event of 2021, it is not the most significant. 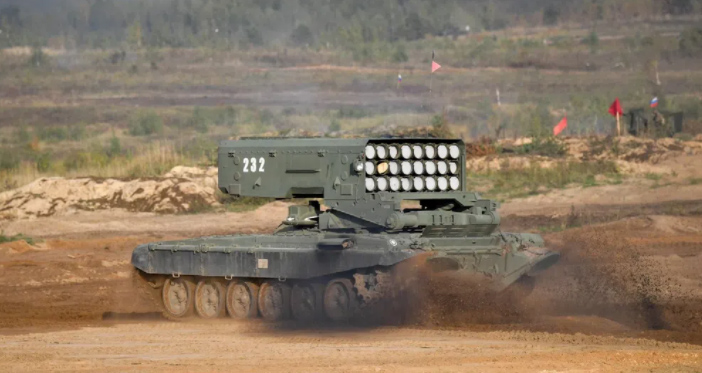 According to the head of General Staff general Valery Gerasimov, during the so-called snap check of combat readiness in March and April 2021, “more than 300 thousands servicemen, 35 thousand equipment items, military and special vehicles, 180 ships and boats and about 900 airplanes were engaged”. According to the Gerasimov’s list of the involved equipment, there must have been much more than “300 thousand staff”. With almost no publicity, Russia moved its military units and formations to the operational areas, mainly at the Ukrainian border, but not only there.

After that, the groups were slowly moved back over the summer, with a view to gather into a strike force again during Zapad-2021. But autumn comes along bringing the inevitable rain and mud, making large-scale combat maneuvers difficult outside the paved roads on the Great Russian plane.

That is the main good news. Apparently, there will be no major war in 2021. We can discount the skirmishes and firefights in the Donbas.

Gerasimov and Shevtsova took a thorough go at scaring everybody. Moreover, the personnel have not received any foreign currency except those 2500 people who went to Lukashenka and got some Belorussian rubels. Perhaps, that was a tricky military and political game: bad cops scared the poor Europeans, while good cops nicely suggested a bargain. However for some reason, neither blackmail, nor the stories about hypersonic weapons worked. That is, the West does fear but does not surrender. What remains is to raise the stakes with the risk to get carried away into the big trouble. After all, the muddy season in Russia is regular but not permanent.

InformNapalm [16] does not receive any financial support from any country’s government or large donors. InformNapalm.org website is supported solely by the community volunteers and our readers. You can also volunteer or support the development of the unique volunteer intelligence resource InformNapalm with your donations through Patreon [17].