Recently in Ukrainian media was published [1] interview with General Designer and General Director of the Luch Design Bureau (КБ “Луч”) Mr. Oleg Korostelev about the developing progress and planned deliveries of missile systems “Neptune” and “Olkha” to the Armed Forces of Ukraine. The article was prepared for publication by volunteers of the Lithuanian editorial board of the international intelligence community InformNapalm.

According to Mr. Oleg Korostelev despite of insufficient funding developing process on missile systems “Neptune” is going according to the schedule. First division will be delivered to the AFU in the first quarter of 2022. Potentially AFU should get 5 divisions but for now the contract is only for 3. One division includes:

According to the plan that I signed with the Ministry of Defense whole order should be commissioned in the first quarter of next year. Of course, we plan to make some of the equipment ready by the 30th anniversary of Ukraine’s independence. The rest will be produced and delivered according to the approved schedule,” said Mr. Korostelev.

Neptune [2] (Ukrainian: «Нептун») is a Ukrainian cruise anti-ship missile with maximum firing range of 280 km. The missiles are designed to be located in transport and launch containers (TLC) with dimensions of 5,300 × 600 × 600 mm. The length of the missile itself with an accelerator of 5,050 mm. TLC with a rocket with a cross-shaped hard wing can be placed on terrestrial, marine or air carriers. The system is designed to defeat combat surface ships and transport vessels from the structure of shock groups (convoy) or moving individually with a displacement of up to 5,000 tons. The missile is based on a design of the Soviet anti-ship missile Kh-35, however Ukrainian constructors substantially improved missile range and electronics. 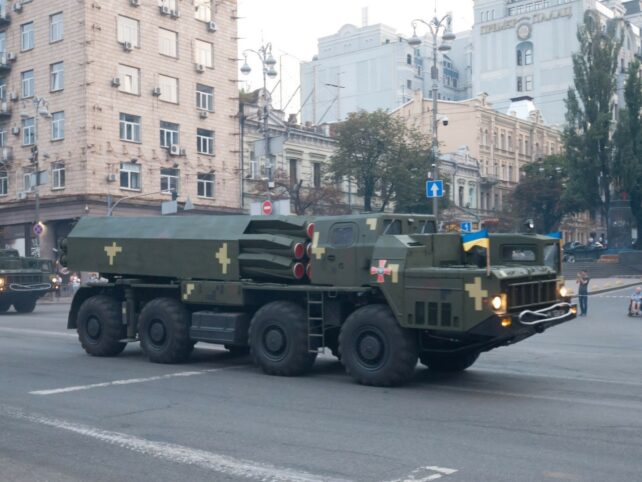 Meanwhile “Olkha” is supplied [4] to the AFU since 2019. In 2019 UFA already received 48 pcs of these missiles and 44 pcs in 2020. For now AFU is being supplied with a “short” version which has a limited firing range up to 70 km. Modified version “Olkha–M” is in a testing stage and should reach AFU in nearest future. The difference between both models is increased firing range from 70 to up to 130 km.

Olkha [5] (Ukrainian: «Вільха») is Ukrainian heavy multiple rocket launcher with guided ammunition. It is made on the basis of the BM-30 Smerch system. Vilkha with 300 mm caliber rockets is considered to be one of the most powerful in the world in its class. The system is intended for the purpose of defeating the targets of any type on the distant approaches. The rocket has a solid motor and can be armed with various types of warheads. It has so-called inertial correction system, which provides for angular stabilization of the round at the boost phase and flight. The system will be used to guard straits and territorial waters, to protect offshore sea lines, naval bases, coastal infrastructure, as well as to defend the coast at amphibious landing threat directions within the missile launch range.