On 14 April, the OSCE SMM for the first time spotted 15 new Russian-made UAZ Esaul armored utility vehicles near the occupied village of Oleksandrivske in Donetsk Oblast, 21 km from the contact line. At the end of April, volunteers from InformNapalm [1] international intelligence community obtained visual confirmation of this information and a photo taken by a mini-UAV. 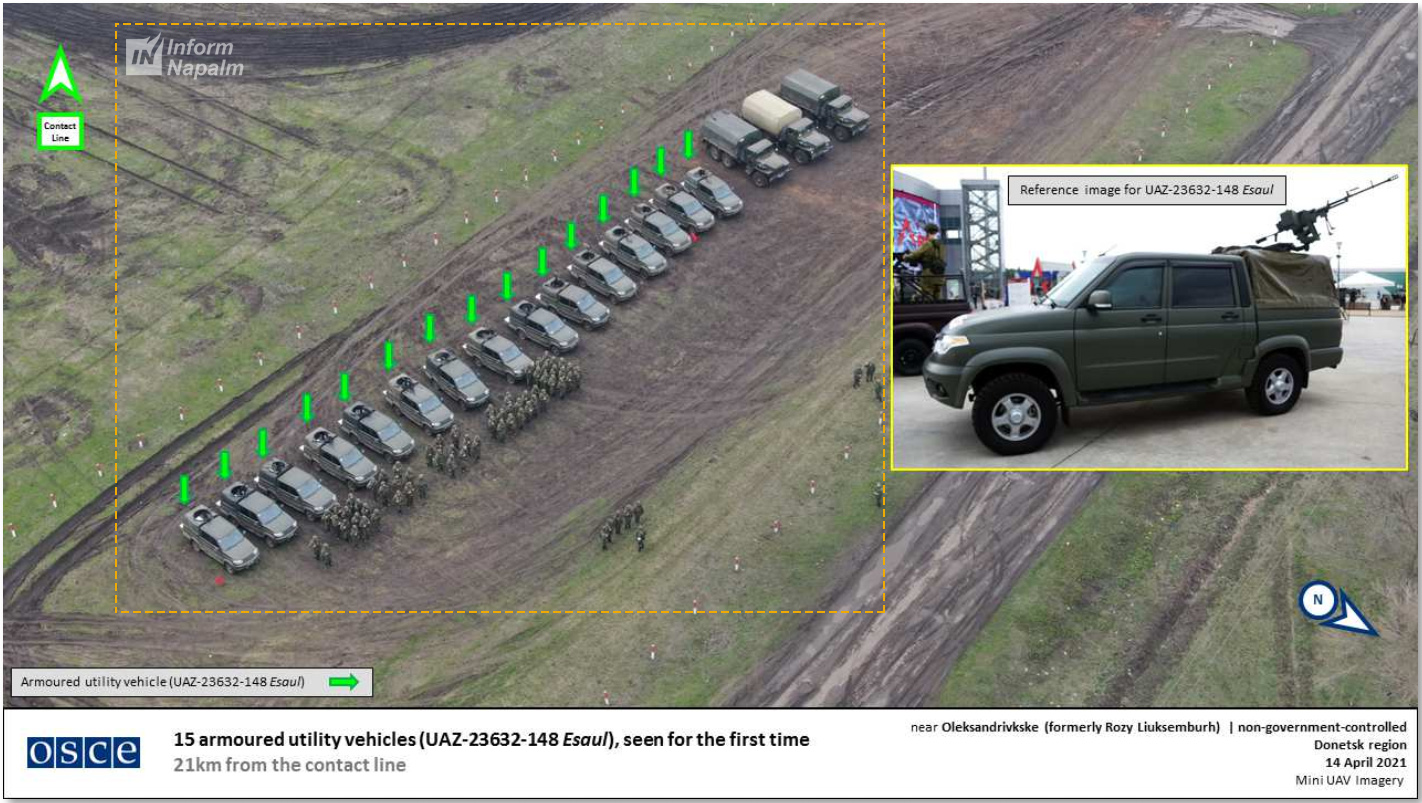 On April 29, Ukraine’s Permanent Representative to the International Organizations in Vienna, Yevhen Tsymbalyuk, stressed [2] during a meeting of the OSCE Permanent Council that Russia continues to supply modern weapons for combat operations in the Donbas produced only in Russia.

UAZ-23632-148 Esaul has been supplied to the Russian army since 2018. This is an armored modification of the UAZ Patriot which has protection against mines and grenades also has an armored engine compartment and explosion and fire proof fuel tanks. A machine gun (Kord or Pecheneg) or a grenade launcher (AGS-17 or AGS-30) can be mounted on the roof of the armored vehicle.

This modification was designed taking into account the combat experience of Russian troops in Syria. The vehicle was used for quick covert transfer of Special Forces troops, combat reconnaissance, assaults, and so on. Its appearance in the arms of the Russian occupation forces in the Donbas may indicate the intentions of the Russian Federation to intensify the escalation of hostilities in eastern Ukraine and increase their dynamics.

Russia supplies more and more new equipment to the Donbas

Let us remind you that in December 2020, the modified Russian 2B26 Grad  MLRS based on the KamAZ-5350 chassis which are in service with the Russian Armed Forces were first included in the OSCE SMM report in the Donbas [3].  In February 2021, InformNapalm volunteers received an exclusive visual confirmation of information about the first official spotting of the Russian 51U6 Kasta-2E1 radar station [4] near the village of Buhaevka, Luhansk Oblast.

Overall, the InformNapalm database [5] of Russian weapons spotted in the Donbas already contains more than 50 types of military equipment that could not have been captured from the Ukrainian army and its presence is direct evidence of the supply of weapons by the Russian Federation.

Simultaneously with the testing of modern models of weapons and equipment in the Donbas, the Russia also supplies the occupied territories of Ukraine with weapons of the old Soviet models, for example:

These and other types of weapons have also been repeatedly recorded in InformNapalm’s OSINT investigations but they are not presented in our database, as their presence in the occupied territory of Donetsk and Luhansk Oblasts can be formally justified by the legacy of the common Soviet past and requires other methods of proof. Therefore, we focus our attention mainly on those models of weapons and equipment, the presence of which in the occupied Donbas is irrefutable evidence of Russian military aggression by itself.

[14]The publication was prepared by Roman Burko.Translated by Svetlana Kemblowski. Distribution and reprint with reference to the source is welcome! InformNapalm materials are available under a public license Creative Commons Attribution, CC BY [15]. The condition for using our materials is a hyperlink to the original source in the first or second paragraph of your publication. InformNapalm social media pages:

[18]InformNapalm [19] does not receive any financial support from any country’s government or large donors. InformNapalm.org website is supported solely by the community volunteers and our readers. You can also volunteer or support the development of the unique volunteer intelligence resource InformNapalm with your donations through Patreon [20].