In the beginning of 2020 Vladimir Putin promised changes in Russian politics. He reshuffled the government and initiated constitutional amendments. Putin personally made a promise that the government would be accountable to the parliament and spoke against abolishing presidential term limits. Moreover, he even suggested that the word ‘consecutive’, which enabled his comeback to the Presidential office in 2012, should be removed from the constitution.

Putin’s promises were hollow. The constitutional amendments and the subsequently adopted constitutional laws strengthened the president’s power to appoint ministers and other state officials. In addition, Putin has secured his term in the office at least until 2036. The Kremlin conducted a true political spectacle to adopt constitutional amendments. The first Soviet female cosmonaut Valentina Tereshkova pretended to put forward an unexpected proposal that the two-term limit should only apply from the next presidential election. Tereshkova, a member of the State Duma, argued that during her meetings with the electorate she had found out that people feared Putin’s exit. Putin himself visited the State Duma a couple of hours later and endorsed the proposal. The Federal Assembly and all Russia’s regional parliaments approved the package of constitutional amendments in four days.

To demonstrate public support for the continuity of Putin’s presidency the ruling regime organized a weeklong ‘All-Russian vote’. According to the Russian law, the popular vote was not even mandatory. The voting procedure lacked legal regulation, which enabled unprecedented manipulations of the democratic process. Polling stations were set up at work places and residential areas, such as the backyards of apartment complexes. The electorate was 17motivated with games and souvenirs. The authorities impeded the activity of independent observers, whereas no limits were applied to the official propaganda campaign for constitutional amendments. The Kremlin had already used such new campaigning and voting practices in regional elections. It is highly likely that the regime will further elaborate and use them for gaining desirable results in the upcoming elections to the State Duma in 2021.

A large part of Russians believe in the regime’s propaganda, which presented the constitutional amendments not as an extension of Putin’s rule but as an entrenchment of national values and effort to improve social welfare by indexation of wages and pensions. Others see no alternative to the current ruling regime mainly because the regime effectively eliminates such emerging alternatives by naming any opposing party a ‘foreign agent’ , prosecuting political opposition and civil society activists. The discontent with the regime rises slowly, society seeks for alternative sources of information and expresses its dissatisfaction in protests. So far, such protests are regional and mostly driven by local issues. The regime does not consider them as a threat to political stability, not even those in Khabarovsk that lasted over a hundred days. However, such protests revealed a new trend – the involvement of previously completely loyal groups. In several years, the situation in Russia could resemble the current crisis in Belarus. Passive support could suddenly disappear and the ruling regime could expect to retain power only by resorting to violent repressions. 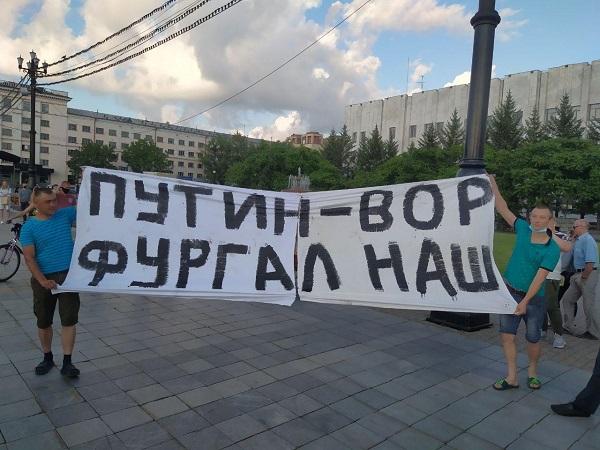 As a result of the COVID-19 pandemic, Russia’s GDP in 2020 decreased similarly to the global economy. However, the capital outflow and the depreciation of rouble reveal Russia’s deeper economic problems. The international sanctions also limit investment and development of innovative technologies. Russia’s economy has faced serious difficulties since 2014, and the Kremlin tried to boost the country’s development by initiating extensive investment programs. The pandemic further complicated their implementation that was stumbling due to the regime’s bureaucracy and corruption. Putin decided to postpone the implementation of the National Program from 2024 to 2030 and replaced the specific ambitious goals with ambiguous phrases.

The Kremlin turns back to a well-tested survival policy, where the needs of the regime are financed by exporting resources and the citizens cover the costs of macroeconomic stability. This ensures the supposed stability that is increasingly emphasized by the regime’s propaganda. However, economic problems erode public support for the regime and no propaganda can hide its kleptocratic tendencies. During the pandemic, the state aid was mostly provided to large state companies and businessmen related to the regime. Russia plans budget cuts, but those are unlikely to apply to influence operations abroad and to power structures that ensure stability at home.

One of the most vocal critics of the Kremlin’s regime Alexey Navalny was poisoned in Russia on 20 August 2020. Independent laboratories in several countries and the Organisation for the Prohibition of Chemical Weapons (OPCW) identified that Navalny had been poisoned with a nerve agent belonging to the Novichok family of chemicals. It is highly likely that Navalny was poisoned by order or with the approval of the highest echelons in the Kremlin. The Kremlin’s regime immediately launched a coordinated campaign to conceal the fact of the poisoning. It lied about Navalny’s condition, delayed his transfer from the country, did not investigate the case and later ignored publicly revealed facts about the Federal Security Service’s (FSB) activities in the poisoning operation. Similarities to other assassination attempts abroad (Alexander Litvinenko, Sergey Skripal, Emilian Gebrev) increase suspicions that it is the regime’s responsibility.

The assassination attempt on Navalny shows that for the sake of retaining power the ruling regime is determined to resort to ultimate measures. The Kremlin considers Navalny to be one of the most dangerous opposition activists. He and his supporters have been increasingly subjected to traditional repressions (prosecutions, arrests, fines and expropriations of companies’ assets) but continued opposition activities nonetheless. Navalny was poisoned during his trip to Novosibirsk and Tomsk to investigate corruption. In regional elections that took place after the poisoning, the ruling party ‘United Russia’ received fewer votes than in the previous elections, while Navalny’s allies were elected to the local councils. 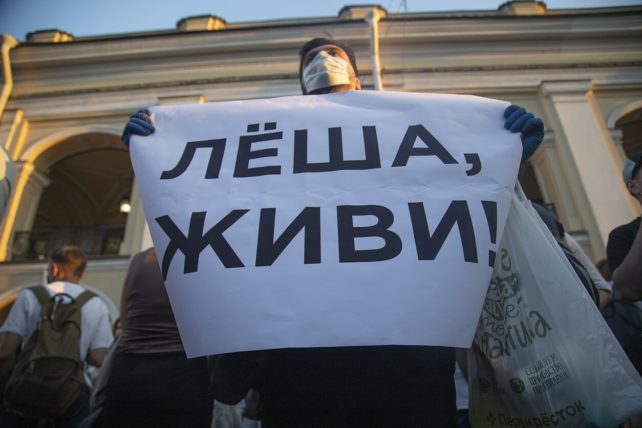 Russia continues to deny the fact of poisoning and conducts a coordinated disinformation campaign seeking to confuse domestic and international audience. It presents most incredible versions of the events, accusing the West and the Russian opposition of poisoning and provocations against Russia. Russia’s top officials who are personally involved in the propaganda campaign discredit themselves and demonstrate their disregard to law and morality. Even though the Kremlin would like the international opinion to change, it is not willing to change its own actions and so it further reduces possibilities for trust and dialogue in the international arena.

The Kremlin is unlikely to modify its rhetoric and policy in the short term. It has been rebuffing concerns of the international community about authoritarianism and human rights violations as hypocrisy that serves to weaken Russia as well as considering internal criticism of the regime as a venality for a long time. Isolation is the new trend of Russia’s foreign policy. It is based on perception that if the West, the EU and particular countries cannot accept the cooperation on Russia’s terms, the Kremlin itself should redefine relations with them. As a neighbouring country, the isolated and resentful Russia would pose a greater threat to Lithuania. It is likely that Russia’s influence in the neighbouring countries aimed at neutralizing alleged external threats will become the Kremlin’s priority, and Russia’s actions will be less constrained not only by international law but also by international opinion

The article is based on the report “The National Threat Assessment 2021” prepared by the State Security Department of the Republic of Lithuania (VSD) and Second Department of Operations Services under the Ministry of the National Defence (AOTD). You can download full report here [3].