According to the data collected by the volunteers of InformNapalm [1] international intelligence community Russia is planning to secretly transfer the modernized Pantsir-S1 version of the surface-to-air missile and gun system (SAMG) to the occupied areas of the Luhansk and Donetsk oblasts of Ukraine across the uncontrolled sections of the border in the nearest future. The Russian military and political leadership is thus pursuing several tactical and strategic objectives. Read more below in this article.

Since 2014, the occupied territories in eastern Ukraine have served as Russia’s military range and a convenient combat testing grounds for different types of weapons and military hardware [2]. As international researchers and observers have repeatedly noted, significant amounts of ammunition, weapons and equipment have been supplied, freely and unchecked, through the Rostov Oblast of the Russian Federation to the east of Ukraine, along with trained personnel, both regular Russian military men and mercenaries. This has provided wide opportunities to the Russian Federation for lice military testing of some of its newest military technology, limited only by the Kremlin’s desire to conceal Russia’s direct participation in the aggression against Ukraine. That is the reason why Russian invasion of Ukraine has kept its hybrid character since 2014. The Kremlin is hiding under the guise of “illegal armed groups” in order to minimize political consequences and avoid significant economic sanctions from the West.

Pantsir-S1 fiasco in the Middle East 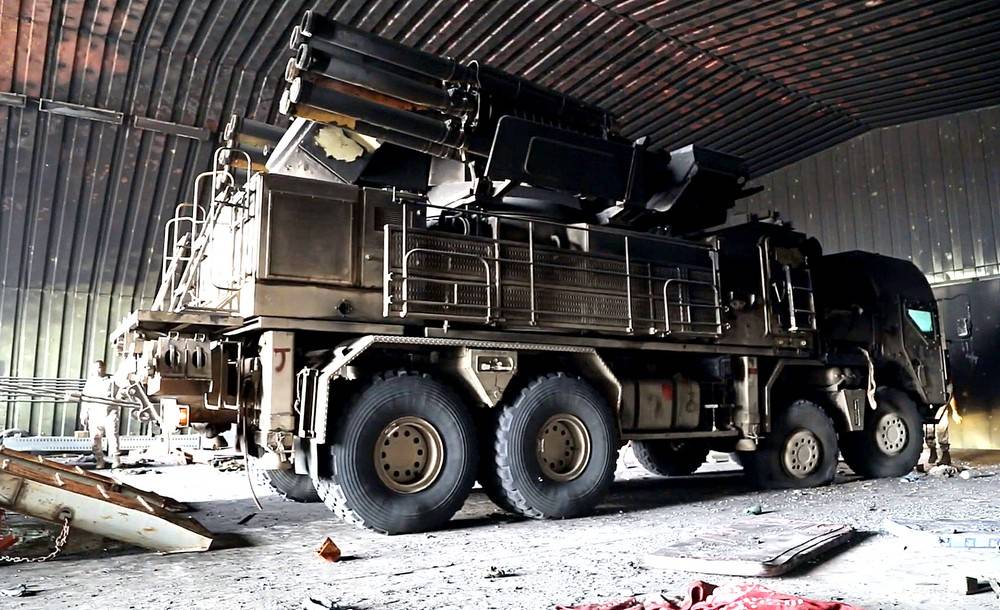 After the Russian Pantsir-S1 SAMG systems showed their poor effectiveness against Bayraktar TB2 unmanned combat aerial vehicles (UCAV) in the hostilities in Libya, Syria and Nagorno-Karabakh, Russia seeks to take some kind of rematch in order not to lose export contracts for these systems. For example, according to the Defense Express [3] publication, as of June 2020, at least 23 Russian-made Pantsir-S1 systems were lost in Syria and Libya. At the same time, the loss of the UCAVs was minimal. Most of the Russian Pantsir-S1 systems were defeated by the MAM-L precision-guided smart munitions dropped from the Bayraktar TB2 UCAVs. This undoubtedly affected the image of Russia as an arms manufacturer.

This was also the reason why Russia announced a “deep modernization of the complex” and development of Pantsir-S1M, dubbed by the Russian media a “drone killer”, an image actively promoted for the past six months. In numerous press releases in the media, the Russians allege that the new Pantsir-S1M can defeat “all types of UAVs, including combat ones.“

This publicity stunt partially worked, and Russia landed several contracts for the supply of these systems to Myanmar and Serbia. 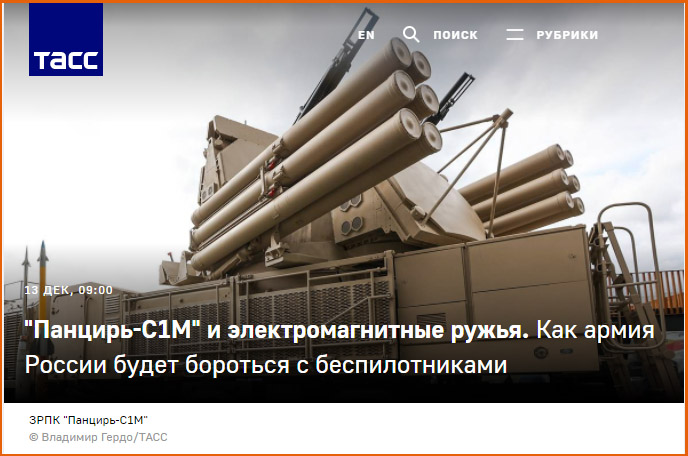 Screenshot of the TASS news agency news story from December 13, 2021.

“Drive to the East”… of Ukraine

Obviously, the military and political leadership of Russia has rethought the old German motto “Drang nach Osten”, which accompanied two world wars, and decided to apply it to the eastern part of Ukraine.

Moscow realized that press releases, presentations, lobbying and media publications were not enough to uphold the image of a “drone killer” against the backdrop of numerous practical defeats [4] of Pantsir-S1.

In addition, in January 2021, there were reports [5] about the transfer of one of the Russian Pantsir-S1 systems captured in Libya to an American base in Germany. Therefore, if further reverse engineering of these Russian systems and the creation of technical documentation for successfully countering these systems by NATO countries has not been done yet, then it is only a matter of time. We do not know how deeply and effectively could the Russians have modernized this system in such a short time. However, examples of other systems [6] show that any modernization or development of alternative technical solutions in the face of sanctions can take now years.

Therefore, in order to prove the reliability of the new Pantsir-S1 system, Russia seeks to shoot down at least one Bayraktar TB2 UCAV in the east of Ukraine and discreetly document this process to present to its allies and potential buyers.

Despite the fact that the occupied territory of Ukraine is saturated with the latest Russian EW / SIGINT [7] equipment (which was repeatedly spotted by OSINT researchers and OSCE SMM monitors), Russia has not yet managed to ground a single strike UCAV. Time goes by, but no rematch for the image loss in Libya and Syria is in sight, so the Russians are considering a contingency “plan B”.

According to the HUMINT intelligence, in case Russian military men fail to actually shoot down a Bayraktar TB2 UCAV in the east of Ukraine, then it will have to be faked through a PSYOP and manipulation of facts. Russians plan to bring in to the Donbas the debris of the UCAVs shot down in Syria and try to present them to the international community as a “new victory of the militants’ air defense forces” (so as not to expose the Russian supply of weapons to the Donbas). And the same fabricated information will be presented to potential buyers of the Russian systems as “an example of the effectiveness of the new Pantsir-S1M.”

Footprints of the Pantsir-S1 in the east of Ukraine

Let us remind that original Russian Pantsir-S1 systems have already been spotted several times in the Donetsk Oblast in the east of Ukraine. For example, on February 18, 2015, the official UK Joint Delegation to NATO published [8] the following photographic evidence: 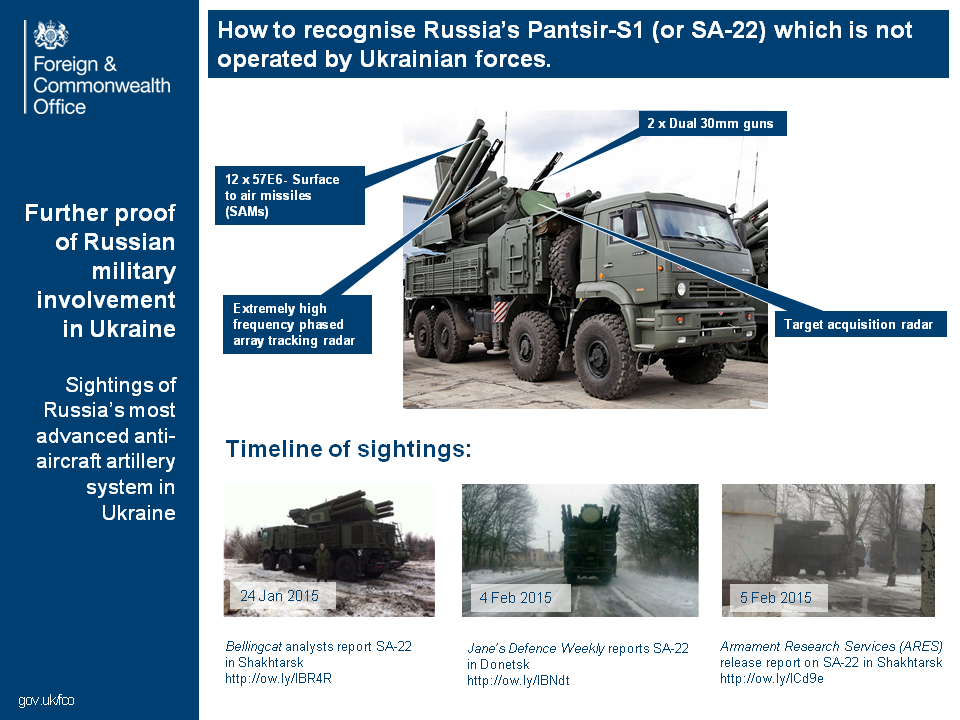 In September 2015, InformNapalm international volunteer community also published its own OSINT investigation [9] featuring a selfie made and posted by one of the mercenaries in the Donbas with the Russian Pantsir-S1 in the background.

However, since 2015, these systems have ceased to appear on photos and videos. Probably, Moscow decided to withdraw its Pantsir-S1 systems back to the Rostov Oblast, away from prying eyes. Moreover, Ukraine stopped deploying its aviation in the zone of the military operation. Therefore, a new decision on the next transfer of Pantsir-S1 systems to the Donbas became relevant only in 2021, when Ukraine used Bayraktar TB2 UCAV for the first time [10] in the combat zone.

The Russian Federation is planning another escalation of hostilities in the east of Ukraine. To do this, they continue to transfer to the occupied areas of Donetsk and Luhansk Oblasts the latest EW / SIGINT equipment and other types of weapons and military hardware. The Russians are aware that in comparison with the active phase of hostilities in 2014 and 2015, the Ukrainian army is now significantly better equipped. The Bayraktar TB2 UCAVs, which have already shown their high effectiveness in the hostilities in Libya, Syria and Nagorno-Karabakh, pose a particular threat. Using the Donbas as military testing grounds, Russia plans to simultaneously solve several tactical and strategic tasks related to both the aggression against Ukraine and export of its own weapons, the image of which was significantly damaged in the Middle East operations.

However, while hunting Ukrainian attack UCAVs, the latest Russian Pantsir-S1M may itself become their target. Unlike in Libya and Syria, the Russian systems in eastern Ukraine face a more difficult task: not to be spotted on a photo or video of a surveillance UAV or get into an OSINT investigation. Now the consequences might not be limited to tweets in the official NATO countries’ accounts containing the evidence of Russian aggression. Compared to 2015, the collective West is taking a much tougher stance, promising to ramp up sanctions for any further aggressive actions against Ukraine. In the eighth year of the war, it is getting increasingly difficult for the Kremlin to pursue its plausible deniability policies under the guise of “illegal armed groups.”

InformNapalm [1] does not receive any financial support from any country’s government or large donors. Only community volunteers and our readers help to maintain the site. You can become one of the community volunteers. Please support the development of InformNapalm, the unique volunteer intelligence resource, with mini-contributions via Patreon [21].