“There is evidence that at the training range in Voronezh Oblast of Russia, artillerists of the Russian Western Military District have tested new tactics of detection and neutralization of enemy command posts by artillery fire.

The operation started with an aerial reconnaissance by Grusha-3 unmanned flying vehicle (UAV) and a round of rapid single artillery fire on the main line of defense. After detecting concealed firing positions, massed artillery fire was delivered to defeat the firing positions and neutralize command posts. InformNapalm established [2] the relationship between the new tactics of the artillery strike application and the actions of Russian artillery units in the area of the Anti-terror Operation (ATO) in Ukraine.

The training exercises involved using self-propelled artillery pieces Msta-B, Akatsiya, Nona, as well as Sani mortars at a distance from 2 to 15 km with direct fire and indirect fire. In total, more than 500 artillerists of the infantry units of the Russian Western Military District took part in this range practice.

We have evidence that these tactics have been developed by the Department of fire and fire control at the Mikhailovsky Artillery Academy on the basis of the Donbas combat experience. Apparently the drills took place on Bogucharsky training range”, said Anatoly Baronin, leader of Da Vinci AG analytical group.

It is worth reminding that the information based on the presentation of the Special Technological Center of the Mikhailovsky Artillery Academy “On creation of the reconnaissance and fire system for mission-critical tasks featuring Orlan-10 UAV” was published on September 2. InformNapalm has recorded [2]these data, as Russian propagandists inadvertently gave away some details indicating the new tactics of combined use of the UAV reconnaissance and fire systems in Donbas.

The presentation was rather a propaganda exercise, as the featured data on destruction or the method of destruction of some forces and assets did not meet reality. Moreover, this publicity stunt of the so-called “Orlan unmanned combat vehicle” (UCAV) systems appeared right after the recent demonstration [3] of Horlytsya, the first Ukrainian tactical combat drone prototype, which, in particular, is able to carry aircraft ordnance. 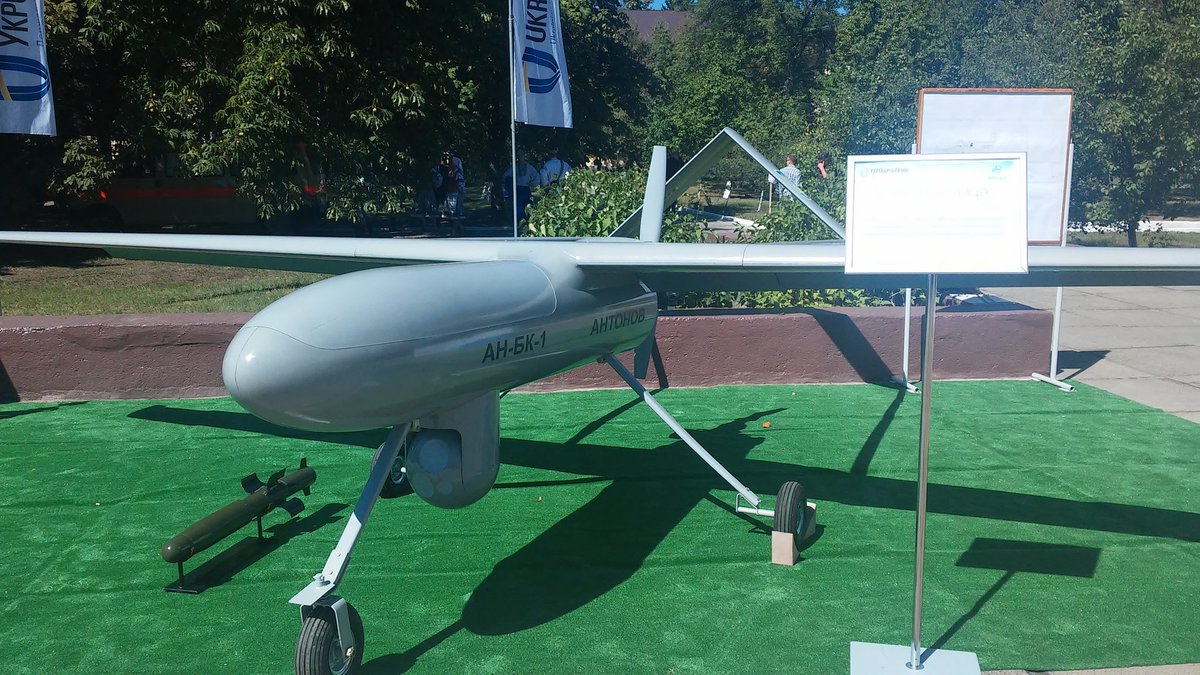 From the above analysis, it follows that Russian propagandists call the coordinated reconnaissance by drones with subsequent artillery bombardment “UCAV operations”. According to media reports, as of May 2016 in terms of development and production of combat drones, Russia is hopelessly behind the USA and has no own equipment in service. At the same time, Russian media call the development of combat drones  “a pursuit of yesterday”. [4]

It is remarkable, that in late July 2016, in the framework of European Reassurance Initiative (ERI) program, the US Department of Defense has transferred to the Armed Forces of Ukraine a considerable number of modern RQ-11B reconnaissance UAV’s worth over $12 million. This fact was also probably behind the Kremlin’s attempt to create a “smoke screen” of misinformation around the issue of its own drone systems.

While practicing coordination and compatibility of UAV and artillery units, Russia is also conducting a misinformation operation diverting attention from the real tactics towards the mythical “own UCAV systems”. During the fighting in Donbas, InformNapalm has identified and collected the facts of presence of 6 Russian UAV types: Granat-1, Granat-2, Forpost, Orlan-10, Eleron-3SV and Zastava. None of these drone types are UCAV’s, however according to our OSINT [5]investigations, Russian army in Donbas could have used UAV’s for dropping of incendiary bomblets purchased in 2012. It does not make these drones into UCAV’s. And dropping of incendiary containers is used rather for psychological effect.

InformNapalm international volunteer community is about to unveil a database and infographics with the list of weapons and equipment of Russian army reliably identified in Donbas through OSINT-investigations.

[6]The publication was compiled specially for InformNapalm.org. Dissemination of information, reprint and use of data with reference to the source is appreciated.