The Russian 2B26 Grad multiple launch rocket system (MLRS) recently featured for the first time in the official OSCE SMM report in the Donbas. This 122 mm MLRS mounted on the KamAZ-5350 chassis has been in service exclusively with the Armed Forces of the Russian Federation since 2012. The SMM daily report No.297/2020 [1] dated December 14, 2020, indicates that a 2B26 Grad system was spotted by the mission’s mini-UAV on December 8, 2020, near the village of Ternove, 57 km east of Donetsk. It is noted that this type of weapon is deployed in violation of the withdrawal line.

InformNapalm volunteer intelligence community has received visual confirmation of this report. Today we are making public this exclusive data. 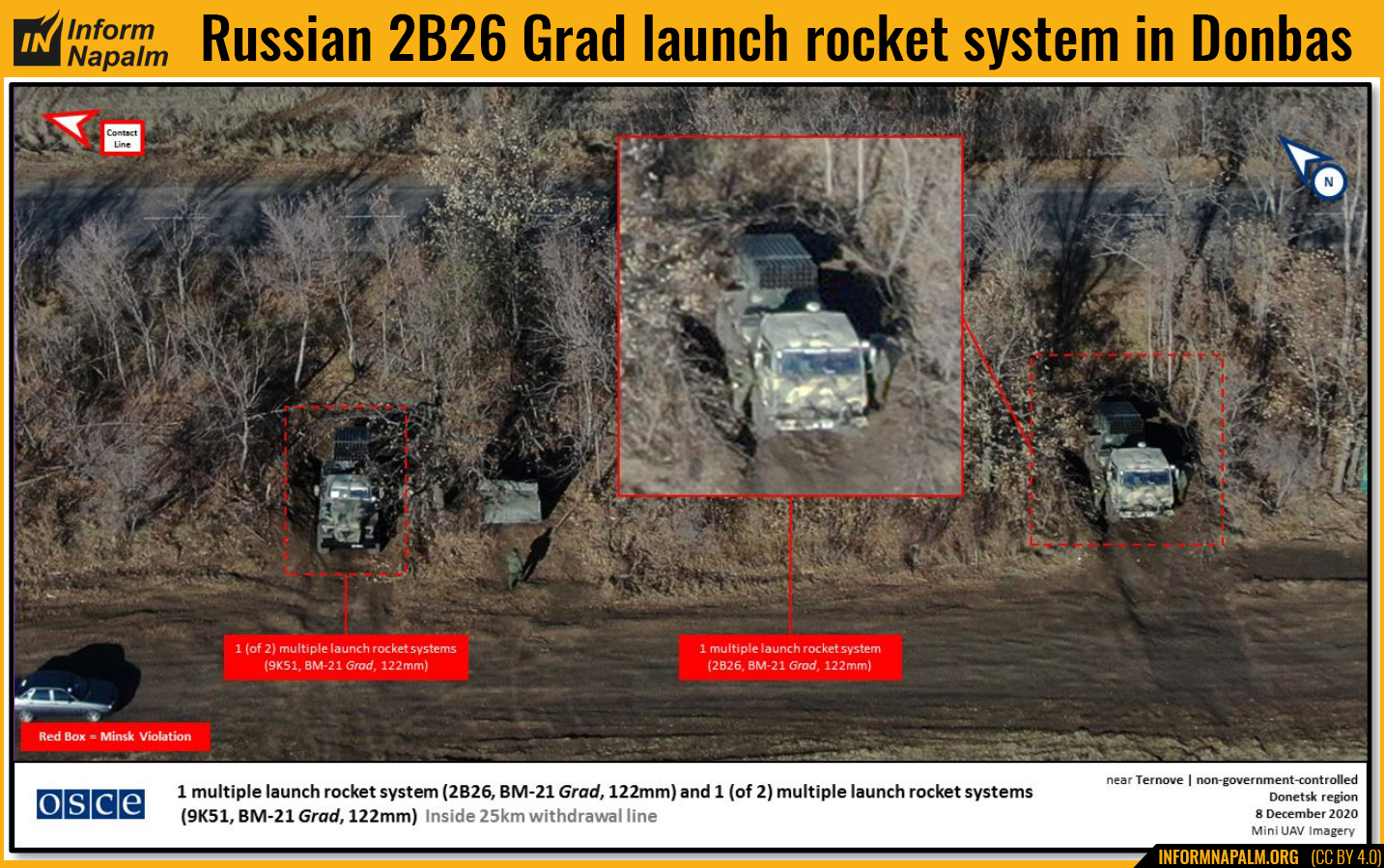 The OSINT investigation of InformNapalm volunteer intelligence community about the spotting of the Russian MLRS 2B26 Grad published on December 7, 2020 [4], probably helped the OSCE observers to identify this system near the village of Ternove. The investigation has been translated into 12 languages. The InformNapalm publication also indicated that these Russian MLRS were spotted in February 2016 in Donetsk Oblast in the area of coordinates: 47°58’14.5″N 38°40’09.0″E. The new location of their detection by the SMM mini-UAVs was also recorded not far from that spot.

Photo from the OSINT investigation by InformNapalm. 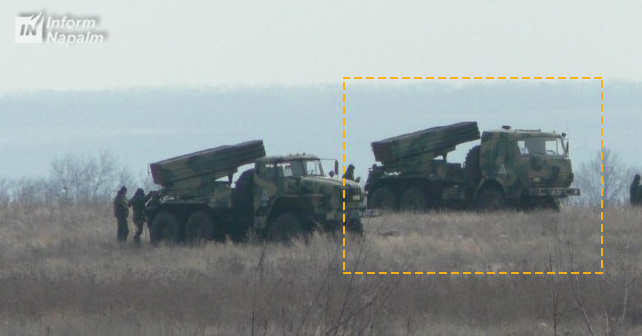 This is not the first case when modern or modernized Russian weapons and military systems were first detected by volunteers during OSINT investigations and later appeared in the official reports of the OSCE SMM, which confirmed the deployment of such systems in the Donbas. For example, the Russian electronic warfare (EW) system R-330Zh Zhitel [6] was yet again spotted by the SMM in Donbas at the end of November 2020. However, it had been for the first time detected in the war zone and identified by InformNapalm volunteers while monitoring the social media pages of the collaborators of the Russian occupation forces in June 2015. This system appeared for the first time in an OSCE SMM report in August 2015.

Another example is the Russian RB-341V Leer-3 [7] EW system, which has been actively featuring in the OSCE SMM reports since 2018. InformNapalm OSINT investigations have been following this system in the Donbas since 2015. Its detection, among other evidence, was made available to the international community in InformNapalm reports presented at the NATO Parliamentary Assembly in Istanbul in 2016, as well as at other international venues of PACE and OSCE.

Apparently, the materials of OSINT investigations by the InformNapalm volunteer intelligence community identifying modern Russian weapons and systems in the Ukrainian Donbas since 2014 have contributed to further identification of these assets by international observers while monitoring the situation in the combat zone. New OSCE SMM reports confirm at the official level the data on the presence of these types of weapons and equipment in eastern Ukraine. These types of modernized weapons and systems could have entered the Donbas exclusively from the territory of the Russian Federation. They are deployed in violation of the heavy weapons withdrawal lines. These facts signal the plans of the Russian Federation to continue an aggressive hybrid war against Ukraine. Although Russia at the international diplomatic level makes propaganda statements about its “desire to achieve peace in the Donbas”, in practice it continues to keep and accumulate in the occupied areas of Luhansk and Donetsk Oblasts of Ukraine not only old Soviet weaponry but also new types of military hardware. The Russian Federation constantly supplies ammunition to the Donbas and completely controls the hostilities against Ukraine with the help of the regular servicemen of the Russian Army, assigned to the hybrid armed formations of the 1st and 2nd Army Corps of the so-called “republics”.

Russia has not abandoned its aggressive intentions and continues to occupy parts of Ukrainian territory and wage a treacherous hybrid war, although according to the Budapest Memorandum it was Russia, together with the United States and Great Britain that guaranteed Ukraine’s sovereignty and territorial integrity in return for Ukraine renouncing its nuclear weapons.

These facts should convince the international community to step up diplomatic and economic pressure on the Russian Federation, which grossly violates its international obligations and for many years continues to wage a war in Eastern Europe. At the same time, Ukraine needs stronger international support at all levels, being the only country in Europe that after giving up its nuclear arsenal has become a victim of the hybrid aggression of the Russian Federation, a nuclear power with a conventional army among the strongest in the world. 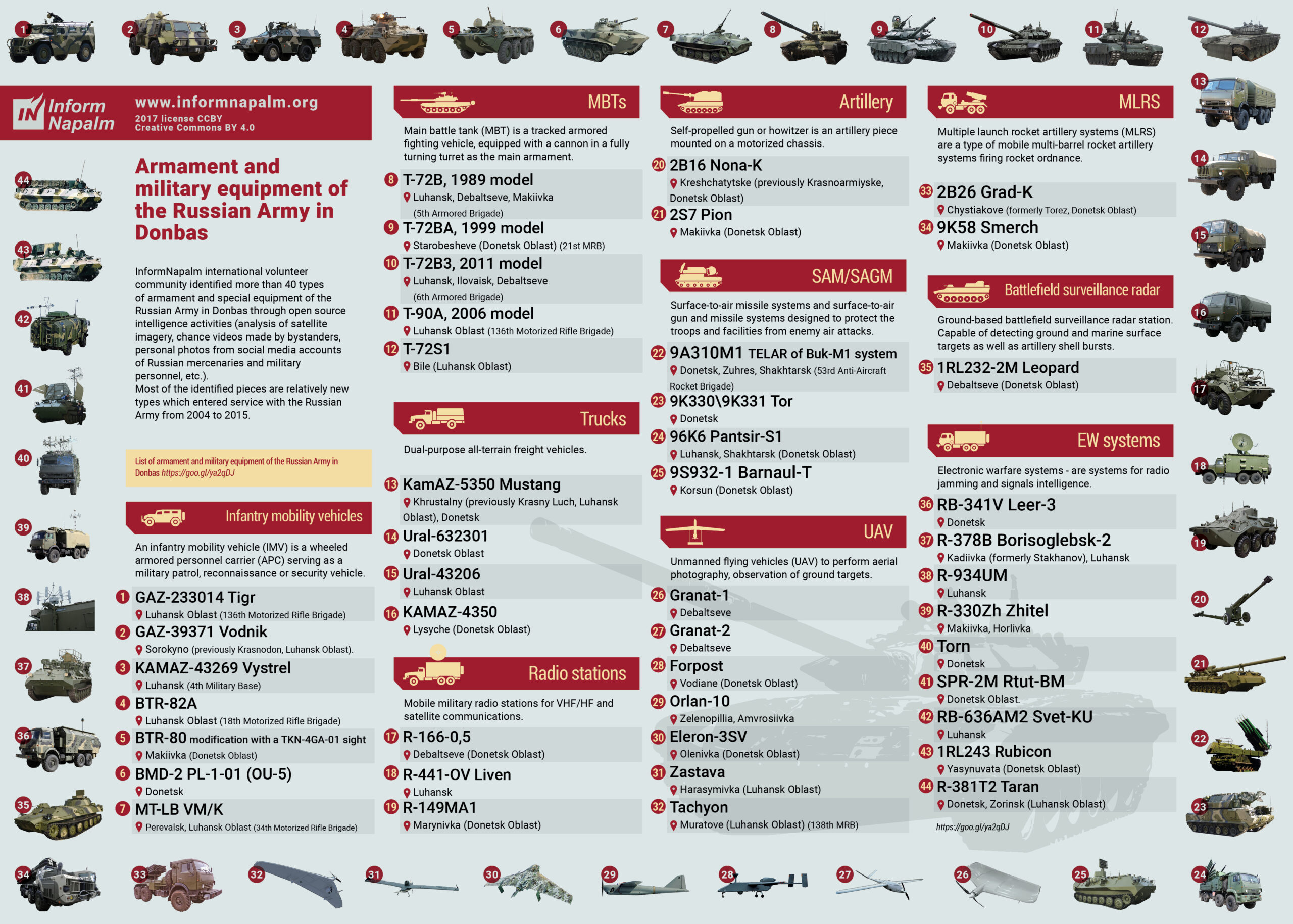 [22]InformNapalm [23] does not receive any financial support from any country’s government or large donors. Our site is kept alive solely through the contributions of our volunteers and readers. You can also volunteer or support the development of the unique volunteer intelligence resource with your donations through Patreon [24].