On February 7, a train with Russian military equipment was unloaded at a railway station in the village of Vesela Lopan (Belgorod Oblast, Russia), just 17 km from Ukraine’s border in Kharkiv Oblast. A twitter user @Liveuamap recognized self-propelled artillery in a video posted on the Internet. The video shows several pieces of Russian 203mm 2S7M Malka self-propelled guns (a modernization of the Soviet 2S7 Pion gun). These guns are capable of firing at a distance of up to 47 km (maximum range with an active-jet projectile) though firing at such distances do not provide sufficient accuracy.

Heavy Russian self-propelled artillery have been recorded periodically not only near the Ukrainian borders. In 2014-2015, volunteers of InformNapalm international intelligence community recorded [13] the presence of this type of heavy Russian weapon in the occupied territories of the Ukrainian Donbas. Russian occupation forces used them in the battle near Debaltseve. 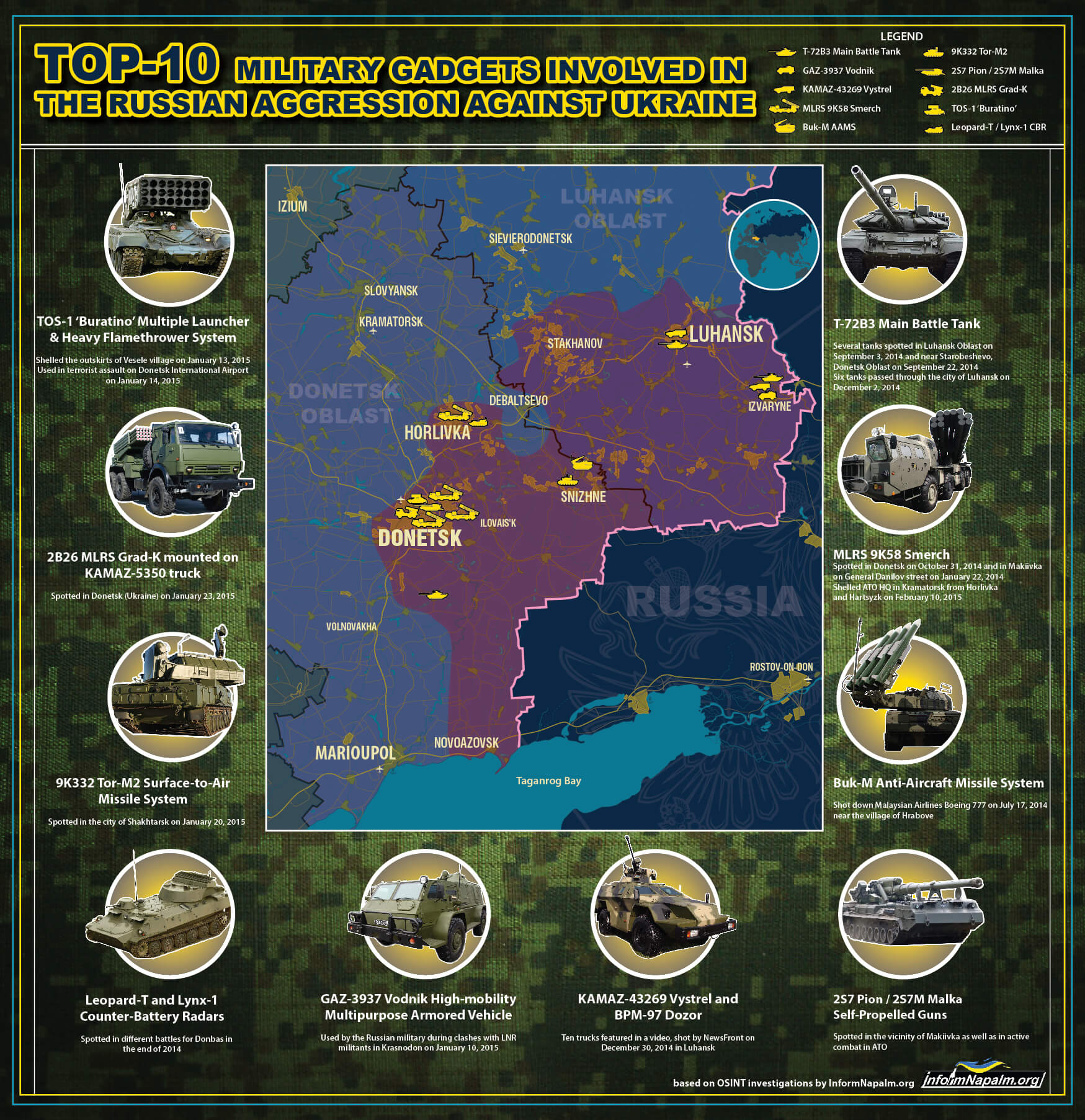 OSINT researcher @Askai707 also posted images of these guns seen in the town of Makiivka (Donetsk Oblast) which is occupied by hybrid Russian forces.

During the war in eastern Ukraine since 2014, Russia has repeatedly resorted to various hybrid actions to disguise its aggression and avoid tightening international sanctions. The Kremlin not only supplied heavy weapons and personnel of the Russian Armed Forces for conducting hostilities, but also resorted to insidious steps, including shelling the territory of Ukraine and Ukrainian defenders across the border. [16] Heavy military equipment in close proximity to the Ukrainian border may indicate Russia’s possible intentions to escalate hostilities or continue to put psychological pressure on Ukraine and NATO. It is possible that these weapons may target the border areas of Ukraine in Kharkiv Oblast from the Vesela Lopan station, or further they may be delivered to the occupied territories of eastern Ukraine so that the Kremlin can continue to maintain the status quo disguising hybrid military aggression as an “internal civil conflict”.

InformNapalm [28] does not receive any financial support from any country’s government or large donors. InformNapalm.org website is kept alive only by the community volunteers and our readers. You can also volunteer or support the development of the unique volunteer intelligence resource with your donations through Patreon [29].