To view, download the PDF version of the report. [1]

Description of the report

This report was based on the investigations carried out by InformNapalm international volunteer community between October 2014 and August 2016 and published on our website. It summarizes 44 special investigations, which identified 33 types of Russian military equipment, samples of which were at the disposal of anti-government forces in the combat zone in Donbas. 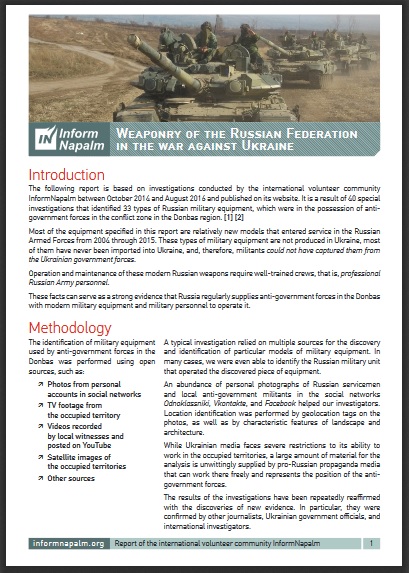 Most of the equipment specified in the report are relatively new types, which entered service with the Russian Army from 2004 to 2015. This military equipment is not produced in Ukraine, most of it has never been imported by Ukraine, so it could not fall into the hands of the enemy as war trophy.

These circumstances indicate that the Russian Federation regularly supplied and continues to supply anti-governmental forces in Donbas with modern military equipment, as well as deploying servicemen, who maintain it.

Identification of military equipment at the disposal of anti-government forces in Donbas was carried out through open sources:

A typical investigation involved multiple different sources of information for the detection and identification of each particular military equipment type. In many cases it was possible to establish even the Russian military unit to which the observed type belonged.

The abundance of photographic material in personal accounts of Russian servicemen and local anti-government militants in social networks Odnoklassniki, VK and Facebook contributed to this work. Locations were determined by the geotags of photos, as well as the characteristic features of the landscape and the architecture.

While the ability to work in the occupied territory is very limited for the Ukrainian television, a large volume of materials for the analysis was delivered by the Russian propaganda mass media, freely working there and representing the viewpoint of the anti-government forces.

The results of the investigations have been repeatedly reaffirmed with new facts coming to light. In particular, they have been confirmed by other organizations: journalists, official Ukrainian institutions, international investigators.

This report presents the results of investigations exclusively by InformNapalm international volunteer community. In the list there are no types of weapons reported by eyewitnesses, the media and the official bodies of Ukraine without providing photo or video confirmation.

The proposed list is reliable, but it’s not exhaustive. It is quite probable that many types of modern Russian military equipment present at the moment in Donbas, have not yet attracted the attention of InformNapalm investigators. Also, the investigations do not answer the question about the number of units of each of the Russian weapons types identified in the occupied territories of Donbas.

The use of the latest Russian military equipment in Donbas is not widespread and it is more likely done for testing purposes. Most of the identified systems are used for mobile signals intelligence (SIGINT) and electronic warfare (EW).

In parallel with the testing of the latest weapons types in Donbas, the Russian military-political leadership floods the occupied territory of Ukraine with the old Soviet-style weaponry, such as:

In its investigations InformNapalm repeatedly recorded these and other weapons types at the disposal of anti-government forces in Donbas. However, the proof of direct deliveries of these weapon types from the Russian Federation to the militants requires different procedures and therefore is outside the scope of the submitted report.

The full version of the report contains significantly more detail.
To view, download its PDF version. [1]

Read : PACE resolution a disaster for Russia, failed provocations by Russian troops, and fighting near Shyrokyne [4]