On Saturday Nov. 5 volunteer aerial reconnaissance recorded the movement of at least 4 heavy-caliber artillery pieces in the village of Noviy (Luhansk Oblast).

The pictures were handed over for examination to the analysts of InformNapalm volunteer intelligence community.

After the analysis and additional study of open source information our team determined: 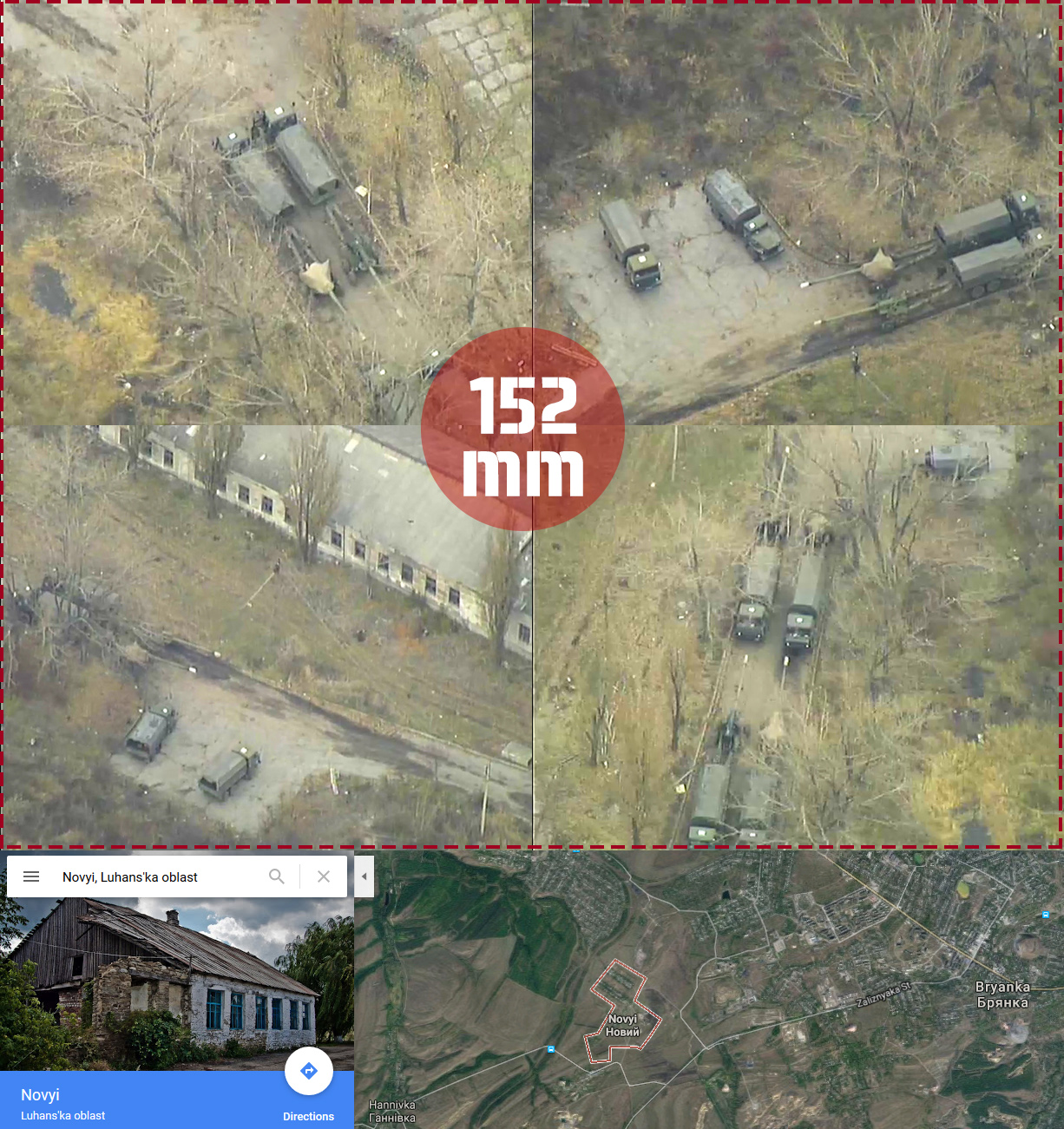 [4]
Based on the official reports of Anti-Terrorist Operation (ATO) command staff and InfoLight interactive map of shelling [5] Ukrainian troops we figured out that on Nov.5 at 7:20 PM, 08:40 PM and 09:10 PM (Kyiv time) Novozvanivka village was shelled specifically by 152 mm caliber cannons. 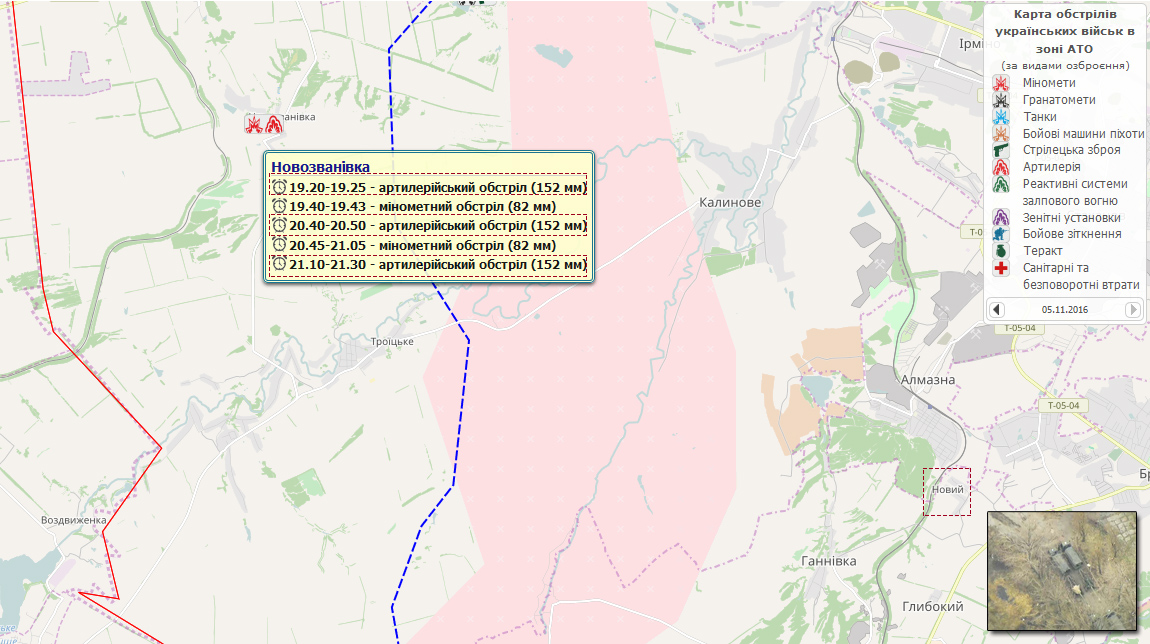 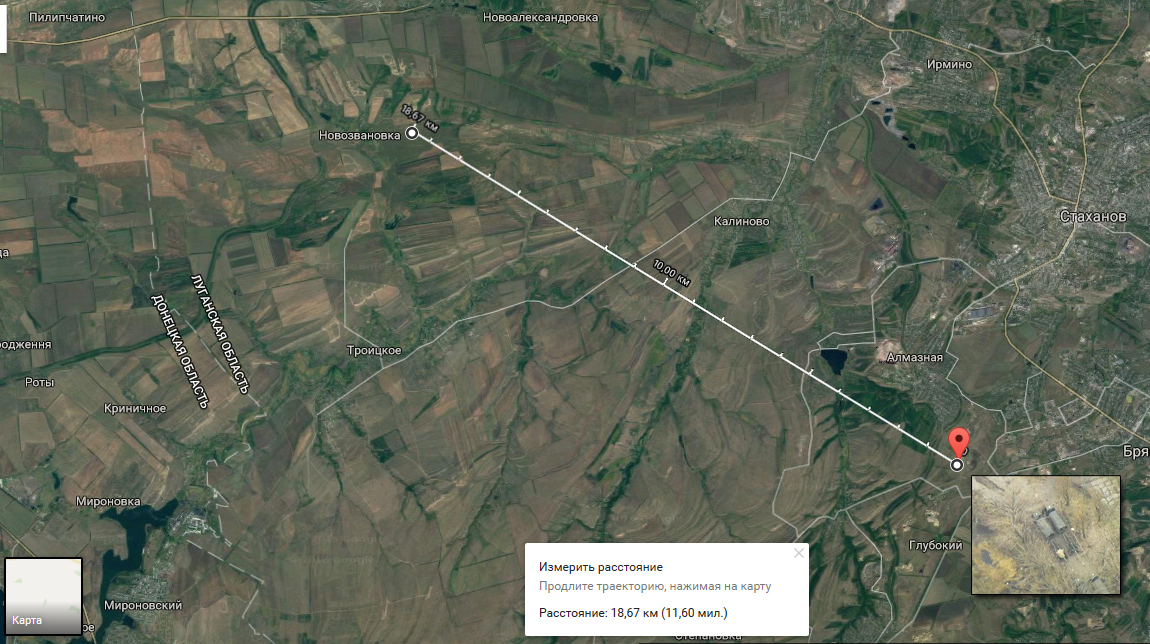 [7]
There is every reason to believe that Russian occupation troops shelled the area with the guns  that have been captured on camera by the volunteer aerial reconnaissance.

It is worth mentioning that this is not the first case when prohibited heavy weapons of the Russian occupation forces get detected. This confirms gross violations of the Minsk agreements by the Russian side.

In addition, according to this investigation, heavy artillery pieces of the Russian occupation forces not only do remain in place close to the contact line, but are heavily used to shell the communities on the territories under control of the Ukrainian army.

Again, in October 2016 there had been detected another large build-up of Russian weaponry on the occupied territories. At that time the drones captured [11] 20 T-64BV and T-72B main battle tanks of earlier modifications (essential armament is a 125 mm cannon), 25 25 BMP-1 and BMP-2 infantry fighting vehicles, 4 2S1 Gvozdika 122mm self-propelled howitzers (essential armament is a 122 mm canon), 5 BTR-80 armored personnel carriers, one 9K35 Strela-10 surface-to-air missile system and other equipment.

(CC BY 4.0 [12] ) This information is specially prepared for InformNapalm.org [13] website; an active link to the source for any reprint or further use of the material is required.

We urge our readers to actively share our publications on social networks. Public awareness is the major factor that can turn the tide of information and conventional warfare.