Islamic State militants have published a video from the Russian military base in Palmyra. Based on the video, the base was left in a hurry and virtually undamaged. Even plates with food were left on the tables in the camp. ISIS militants seized large quantities of weapons and ammunition that had not been destroyed by the Russian military. Volunteers of the InformNapalm volunteer intelligence community decided to analyze the video and to identify the abandoned weapons’ types.

This means that ISIS would find almost everything at this base fitting their mobile guerrilla tactics and covering all its needs: DShKM heavy machine guns for “jihad-cars” (which terrify Assad’s troops), ZU-23-2 anti-aircraft cannons for gun trucks, RPG grenades and a large quantity of small arms and ammunition.

Looking at satellite images of the military base area, InformNapalm volunteers also made a number of interesting conclusions. 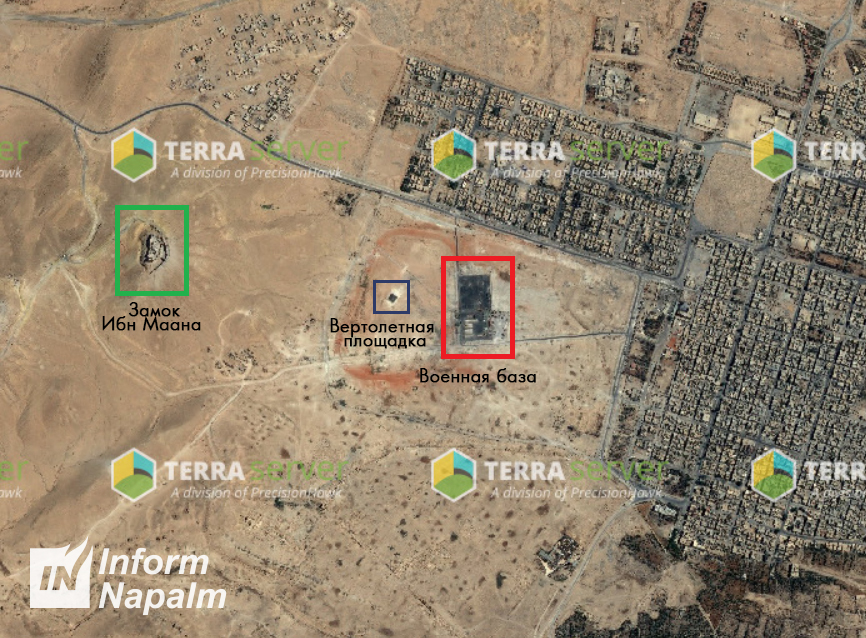 It is worth noting that the arms depot shown in the video was located not within the base itself, but closer to the mountain. The purpose of the base can be understood from the presence of a helipad, located to the west of the base. Also, in the satellite images one can see three green tents of the type included in the autonomous field camp APL-500 used by the Russian Ministry of Defense.

Three tents could accommodate up to 100 personnel.

Probably, the base was used to accommodate Russian commanders arriving in Palmyra by helicopters. It is noteworthy that the APL-500 in Palmyra was not fully deployed. Only some elements were emplaced: three tents and a refrigeration unit used for food storage or other purposes.

A few days ago, in a press release sent to the media, the Russian Ministry of Defense stated that the weaponry left in Palmyra posed no particular military risk. However, this analysis shows that the threat from the abandoned weapons is significant, because ISIS can easily use them in accordance with its warfare concept and tactics, and the Russian military have provided terrorists with plenty of weapons for their gun trucks and “jihad-cars”.

InformNapalm’s own sources report that after giving up and retreating from Palmyra in shame, a conflict developed between Assad’s troops, the Iranians, Hezbollah, and the Russians: there is debate about who fled the battlefield first. It is also known that Russia likely does not intend to recapture Palmyra. This information is confirmed by open sources, such as “Gazeta.Ru [2]” military observer Michael Khodarenok, who claims that the Russian military leadership most likely has no plans to recapture Palmyra. Thus, ISIS terrorists will likely keep the Russian “gifts” from the Palmyra base.

Note, that in its previous investigations InformNapalm identified in the Palmyra area Russian servicemen of the 61st Marine Brigade [3] (Russian Northern Fleet), the 120th Separate Artillery Brigade [4], the 20th Separate Motorized Rifle Brigade [5] and the 7th Armored Brigade of the Russian Armed Forces [6].

Notably, the next day after the withdrawal from Palmyra, Russian propagandists acknowledged the presence of Russian Special Operations Forces [7] in Syria. Some circumstantial evidence, such as abandoned bank cards and communication equipment, suggests that servicemen from the 24th Separate Special Forces Brigade of Russia were among the last to station at the Palmyra base. The soldiers of this brigade were also featured in the Donbas war investigations [8].

So, the Russian servicemen who had previously received the medals “For the liberation of Palmyra” and “For the clearance of Palmyra,” should now probably sell them to phalerists.

See also the full identification database of the Russian military in Donbas at: russian-army-in-ukraine.silk.co [9]

[12](CC BY) Information specially prepared for InformNapalm.org [13] site, an active link to the authors and our project is obligatory for any reprint or further use of the material.