In the first part [1] we have considered the medals that are specifically awarded for the Syrian operation. However, like in any war, regular combat awards are ladled out there as well.

It is also worth remembering that some awards are given post mortem. We can see a clear pattern here: soldiers and lower-ranking officers are posthumously awarded the Order of Courage, while senior officers or those especially distinguished in service are posthumously awarded the Gold Hero Stars. It is known by now that two of the 20 killed in action (KIA) were awarded Gold Hero Stars, and eight – Orders of Courage:

Among the dead there were also the following persons: 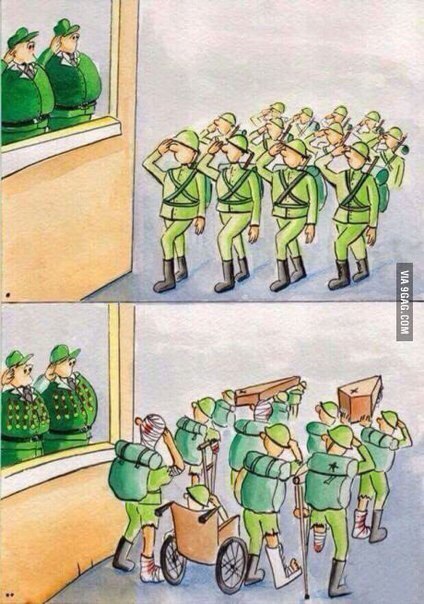 Apart from departmental medals, the Russian military actively receive state awards. The command never deprived themselves of their share of honors, and the Syrian operation became another occasion to get more decorations.

Besides them, the Gold Hero Stars “for Syria” were awarded to several more people:

So, due to the military operation in Syria, the number of “heroes” in Russia has increased by at least 8 people, just in less than a year. After the war in Georgia in 2008, the title of Hero was awarded to 12 people per year (on average); now, only for the first half of this year, 10 people were awarded the Hero Star (8 for Syria + 2 not for Syria), and by end of December this figure is likely to increase.

Syria, a conveyor of medalists

Syria also actively delivers rank-and-file order bearers and medalists. Whereas earlier a soldier could be awarded battlefield promotions and decorations for the operations in the North Caucasus and Donbas, now Syria has become another “promising” region.

Russian regional press is the source to monitor awards for the Syrian campaign, as well as the participation of various military units of Russian Army.

This is how Novosibirsk edition of Komsomolskaya Pravda newspaper tells us about awarding special forces soldiers from the 41th Army:

“The head of the 41th Army and the city mayor awarded special forces soldiers for their performance of military duty in Syria. Major General Aleksei Zavizion handed out to the fighters the Medal class II of the Order For Merit to the Fatherland, the Medal For Bravery, the Medal of Suvorov, and the Participant of Military Operation in Syria Medal (news [6] story, archived [7]).

It is worth special noting that mass awarding took place on March 16, 2016, at the Khmeimim military airbase, with the participation of the Russian Air Force Commander, Viktor Bondarev:

“I cannot yet tell you exactly how many people were awarded. Because the awards were handed out not only to pilots and technicians, but to other specialists of the Russian Air Force as well. There were both ground troops specialists and marines among them. Today I handed out the awards to my subordinates. 242 persons. The Defense Minister will also hand out awards. About 500–700 people will receive decorations” (news [8] story, archived [9]).

In December 2015, the website of the Russian Ministry of Defense posted a story titled The marines of the Black Sea Fleet, who distinguished themselves in the performance of tasks in Syria, received state awards”(news story [10], archived [11]):

“During the red carpet welcome attended by the relatives and family members of the servicemen, the prestigious decorations were handed out to 11 officers and contract soldiers”.

On the photos we can see the Order of Courage, the Order of Military Merit, the Medal class II of the Order For Merit to the Fatherland, and the Medal For Bravery. Russia calims that there is no ground offensive, but we are witnessing handing of combat decorations.

It is interesting that on June 16, 2016, Sergei Shoigu awarded the Order of Zhukov to the 810th Brigade by his special order. A story in Komsomolskaya Pravda offers some interesting details on the rotation of the Black Sea marines:

“From July 2015 to January 2016 the battalion tactical group (BTG) of the 810th Separate Marine Brigade (Black Sea Fleet) had been carrying out a special mission to support the actions of the Russian Air Force units in the Syrian Arab Republic. The group performed its tasks, displaying valor and courage: 32 servicemen were awarded the Medal of Suvorov; 13 – the Medal for Bravery; 7 – the Medal of the Order For Merit to the Fatherland; 5 – the Medal of Zhukov; 5 – Cross of St George, 4th class; and 5 more – the Order of Courage” (news [12], archived [13]).

Officially the operation in Syria began on September 30, 2015, but it looks like the 810th Marine Brigade had been there from July 2015?

Sometimes the names of awardees feature in official press-releases. Thus, in the list of awardees published on the website of the Russian President, we can see the artillerymen of the 41th Army and the mentioned 810th Marine Brigade (news [3] story, archived [14]):

These decorations were on the list of awards for the Russian Air Force servicemen being officially involved in the operation in Syria. However these awards suggest there was a ground operation, as among the awardees are marines, artillerymen, drone pilots, etc.

Upon every awarding, InformNapalm analysts look out for the “medal trace” on social networks. Soldiers publicly post pictures from award ceremonies, and the pictures of their medals, sometimes even showing the award certificates with serial numbers and signatures.

We previously reported about the participation of the Northern Fleet Marines in the Syrian war [15]. In contrast to their fellows from the Black Sea, they were not awarded so pompously, but on the web there is a lot of information on awarding the servicemen of the 61st Marine Brigade (military unit 38643, permanent station in Murmansk oblast, Russia; commander – Colonel Fedyanin). 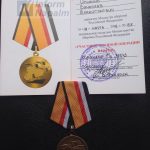 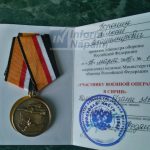 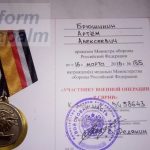 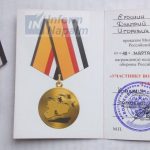 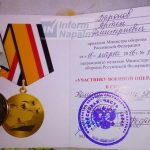 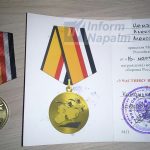 Juging by the date in their award certificates (March 16), the marines were awarded among others at the Khmeimim airbase, and returned home with medals. 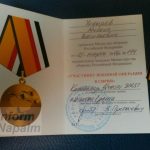 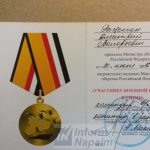 Those awards did not go unnoticed by regional press (news story on state channel Murman [24], archived [25]): 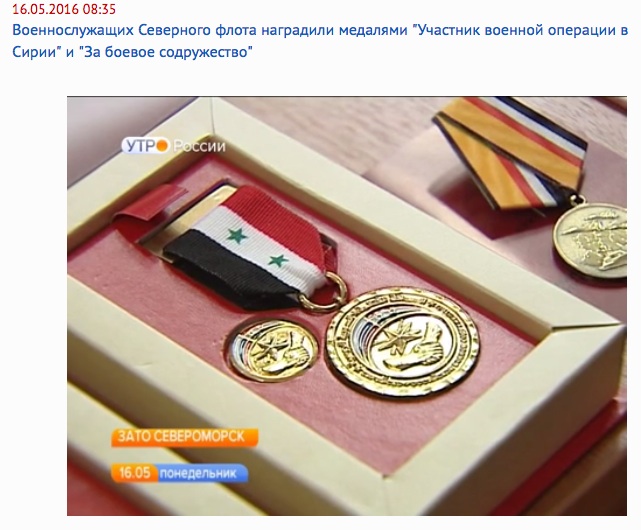 The lists of awardees often include servicemen from interesting military units. Below is the award certificate signed by “commander of military unit 9???? Lieutenant General A. Shevchenko. 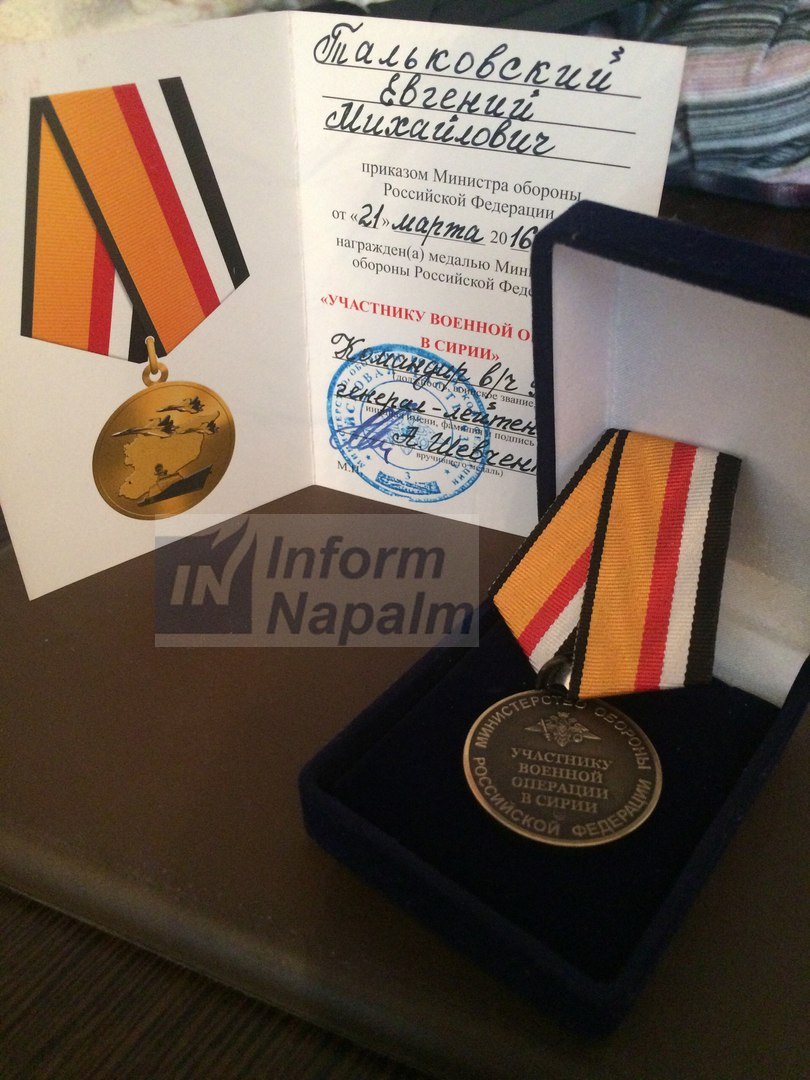 Several digits are hidden, but we could identify the full number of the military unit 93603, on the round seal. It is the Main Automotive-Armored Directorate of the Ministry of Defense of the Russian Federation (GABTU), military unit 93603 (Moscow) headed by Lieutenant General Alexandr Shevchenko since 2009 (profile on the website of the Russian Ministry of Defense [26], archived [27]). Probably, the medal was awarded for the Russian T-90 main battle tanks for Bashar Assad that have repeatedly been spotted in Syria.

In the first part of our investigation we have already reported about the special medal for sappers For the Demining of Palmyra, but in the award ceremony in Nakhabino (Moscow region) on June 7, 2016, we also saw other awards – Medals of Suvorov and Orders of Courage (news [28], archived [29]). 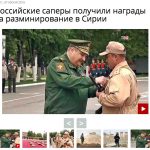 [30]
Colonel-General Istrakov handing out the awards 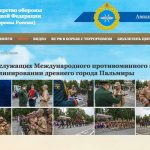 [31]
Info about the awards on the Defense Ministry website 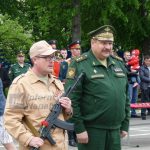 [32]
Medal of Suvorov for Palmyra 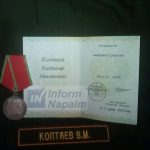 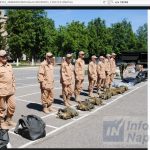 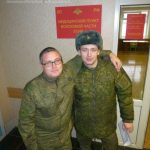 The “medal trace” of the Russian military campaign in Syria can be found in the military units scattered across Russia.

The anniversary of the official start of the Russian military operation in Syria is coming soon. In less than a year, Russian military have established three new medals for participation in the Syrian operation. Note that it was done in addition to the existing departmental and state awards which are being given fairly often.

The Russian side likes to call this war a “humanitarian operation”. They particularly emphasize that the only Russian force involved in the military activities is the Air Force. As far as the ground operation is concerned, according to Colonel-General Dvornikov, it is all just about the special forces conducting “additional intelligence”. To avoid analogy with Afghanistan, the Russians underline that their army is not involved in the ground offensive.

However, even a brief analysis of the awardees shows that the ground operation in Syria is heavily manned not only by special forces, but also by the regular Ground Forces combat units.

While the war is just gaining momentum, it is already clear that the “Syrian additional humanitarian intelligence” will be a separate item of the Russian budget for quite some time. And soon the Russian general public will start noticing new unions of veterans of a war that nobody declared. The number of “heroes” and memorial tablets with their names will increase, too. There will also be benefits that all those “heroes” of this nonexistent war will claim from the state.

It looks like Afghanistan and Chechnya all over again. And this is as clear as day, without any “additional intelligence”.

This publication was prepared by Anton Pavlushko [36] and Victory Krm [37]for InformNapalm volunteer intelligence community.

[39](CC BY) Information specially prepared for InformNapalm.org [40] site, an active link to the authors and our project is obligatory for any reprint or further use of the material.