The Olympic Games in Rio de Janeiro have come to an end, but the medal count for the Russian unsporting military “achievements” in Syria is still in making. In a series of publications about the Russian medals InformNapalm will sum it up as follows: the undeclared war in the Middle East is running its course for the Russians; many people do not give it due importance, but, apart from the current classified losses, Russia will receive a generation of veterans of undeclared wars in 5–10 years.

Officially, Russia has been at war in Syria for less than a year, but this operation has already gratified medal collectors with several new items. Any war is a chance for the military men to be awarded battlefield promotions and decorations, which are hard to come by in times of peace. In Syria, the Russian military have no shortage of awards.

The first “Syrian” awards were made as far back as 2013–2014, when the Russian military took part in the transportation and destruction of Assad’s chemical weapons stockpile. Russian cruiser Pyotr Velikiy, the flagship of the Northern Fleet, made then several cruises for the purposes of the special cargo transportation and security.

Background information: in the medal hierarchy of the Russian Federation one should distinguish between the state and departmental awards. The state awards include two Gold Hero Stars, 22 Orders, 7 badges of distinction and 17 medals. However, besides the state awards, each department/ministry may establish its own awards. Thus, the Russian Ministry of Defense has a lot of departmental awards: 60 medals, over 60 badges of distinction, over 40 commemorative badges, plus about 20 more decorations and medals from federal agencies providing service to the army. Actually, nearly each ministry has such a list.

The first medal “for Syria” was established a month after the start of operation, on November 30, 2015. Medal to Participant in Military Operations in Syria with the map of Syria and the ships and airplanes pictured against its background was intended to show that Russia was not involved in the ground part of the operation. 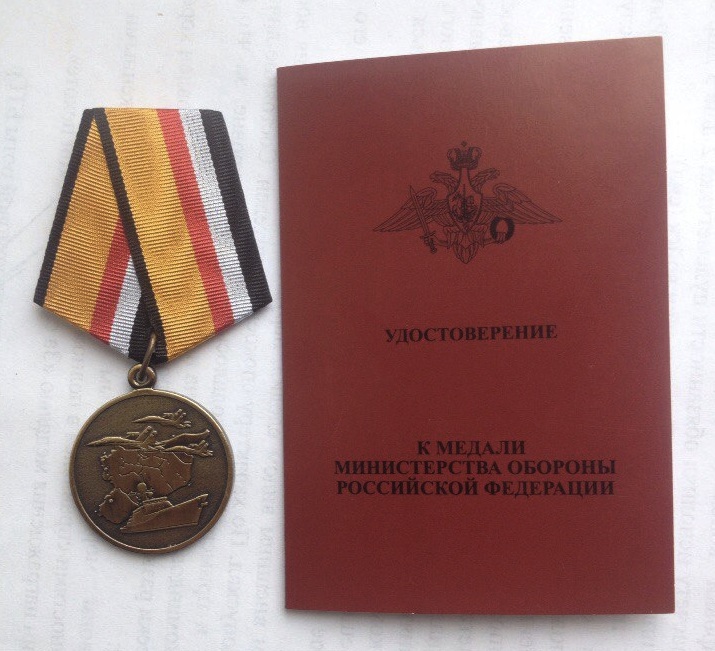 On March 28, 2016 the Russian Ministry of Defense put out a tender [1] for the production of 10 thousand 300 medals (archive [2]). Unlike other cases, the Russian military did not care much about concealing that figure; other medals are produced without open tendering.

The first reports on making awards began to appear after Putin had signed the order on withdrawal of Russian troops from Syria (on March 14, 2016). The military objective was achieved, and it was necessary to show the electorate how the heroes happily return home:

However, these were not the first cases when the mentioned medals were awarded. Back in February the medals were awarded to the women’s cheerleading team of the Russian Heroes show that had performed for the personnel of the Khmeimim airbase (story [6], archived [7]). 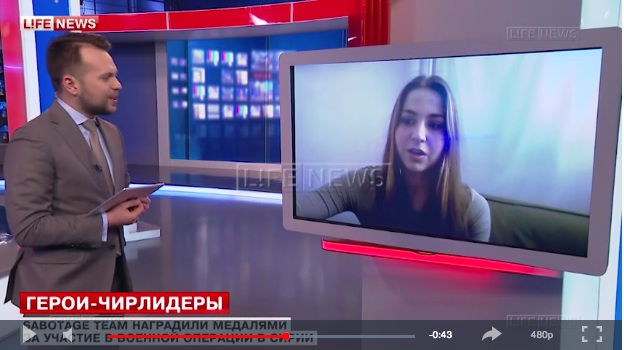 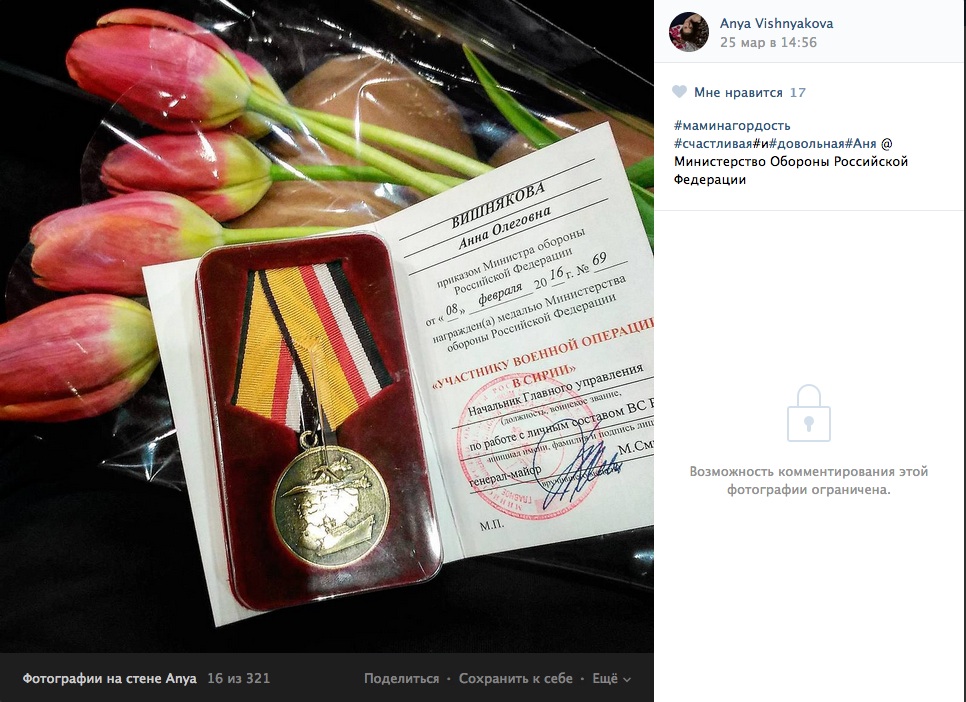 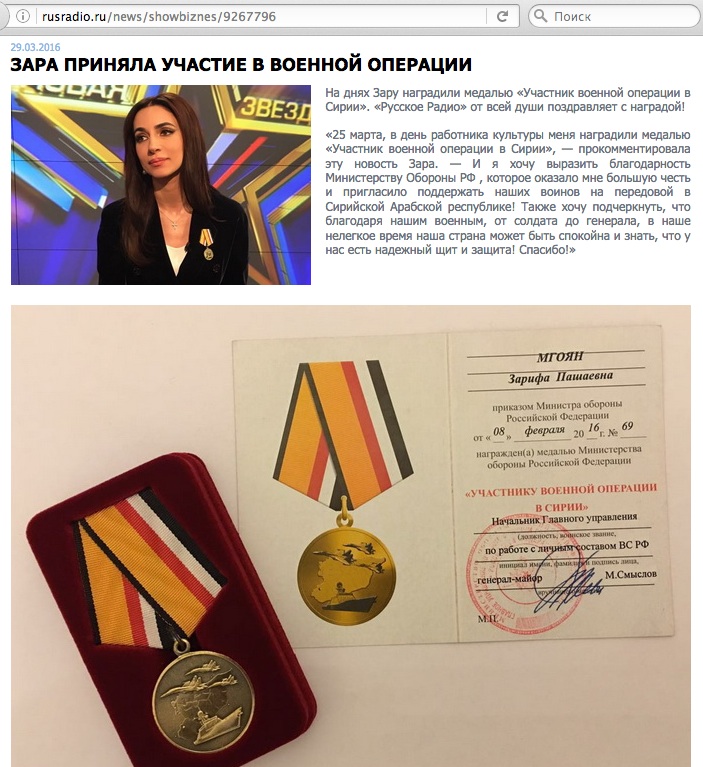 One more medal for a participant in military operations in Syria

Both medals were issued by Order of the Minister of Defense of Russia No. 69.

As a result, soon the military medal lost its original significance, and came to be awarded to everyone who had ever officially been in Syria. The most famous awardees were Iosif Kobzon and Valentina Tereshkova [10], who visited Khmeimim in February 2016.

For the Capture of Palmyra

One of the most important victories both in the military and ideological sense in Syria, was capturing the ruins of the ancient city of Palmyra. In honor of this event, the Russian Ministry of Defense has decided to establish a special medal. Based on the experience of World War II, it would have been logical to expect the name “For the Capture of Palmyra”, similarly to medals “For the Capture of Berlin/Vienna/Budapest/Köenigsberg”. However, according to the official line the city was “captured” by the Syrian military, so the medal was named more intricately, “For the Liberation of Palmyra”. The designers apparently found their inspiration in the history of military awards of the World War II, or Great Patriotic War as it is called in Russia, having recalled medals For the Liberation of Warsaw/Prague/Belgrade: they copied the layout of inscriptions to the new medal, and exactly duplicated the background of the awards for Prague and Warsaw. 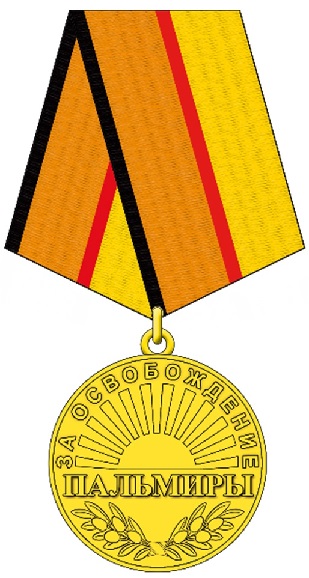 For the Liberation of Palmyra 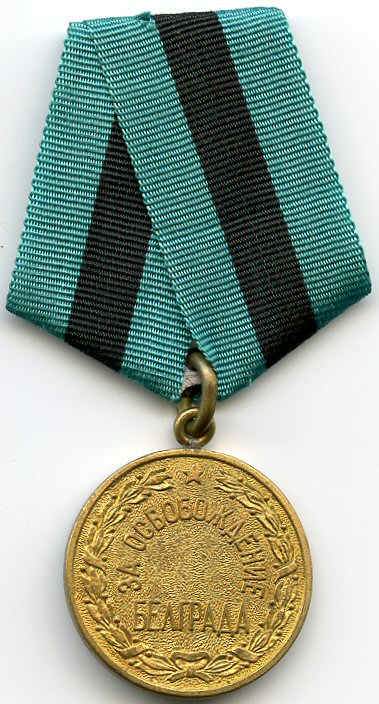 For the Liberation of Belgrade 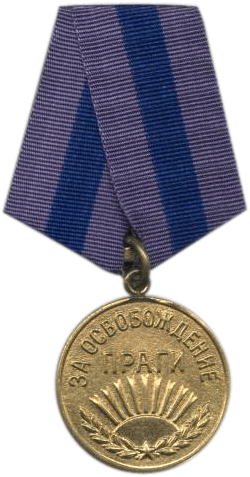 For the Liberation of Prague 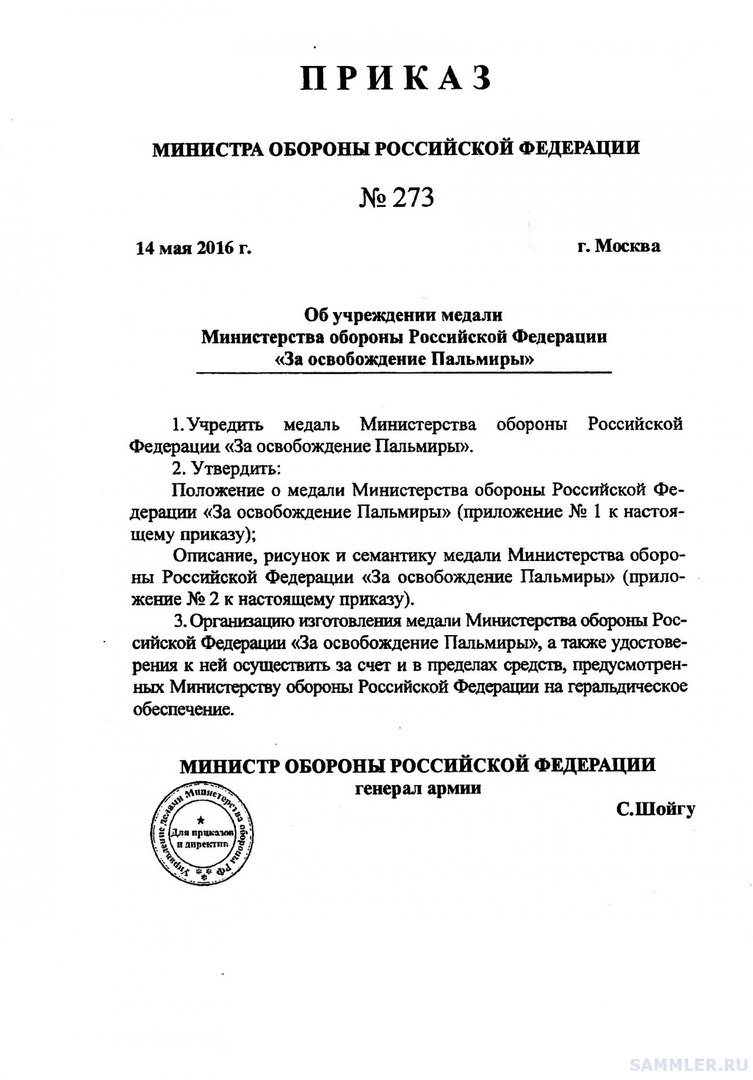 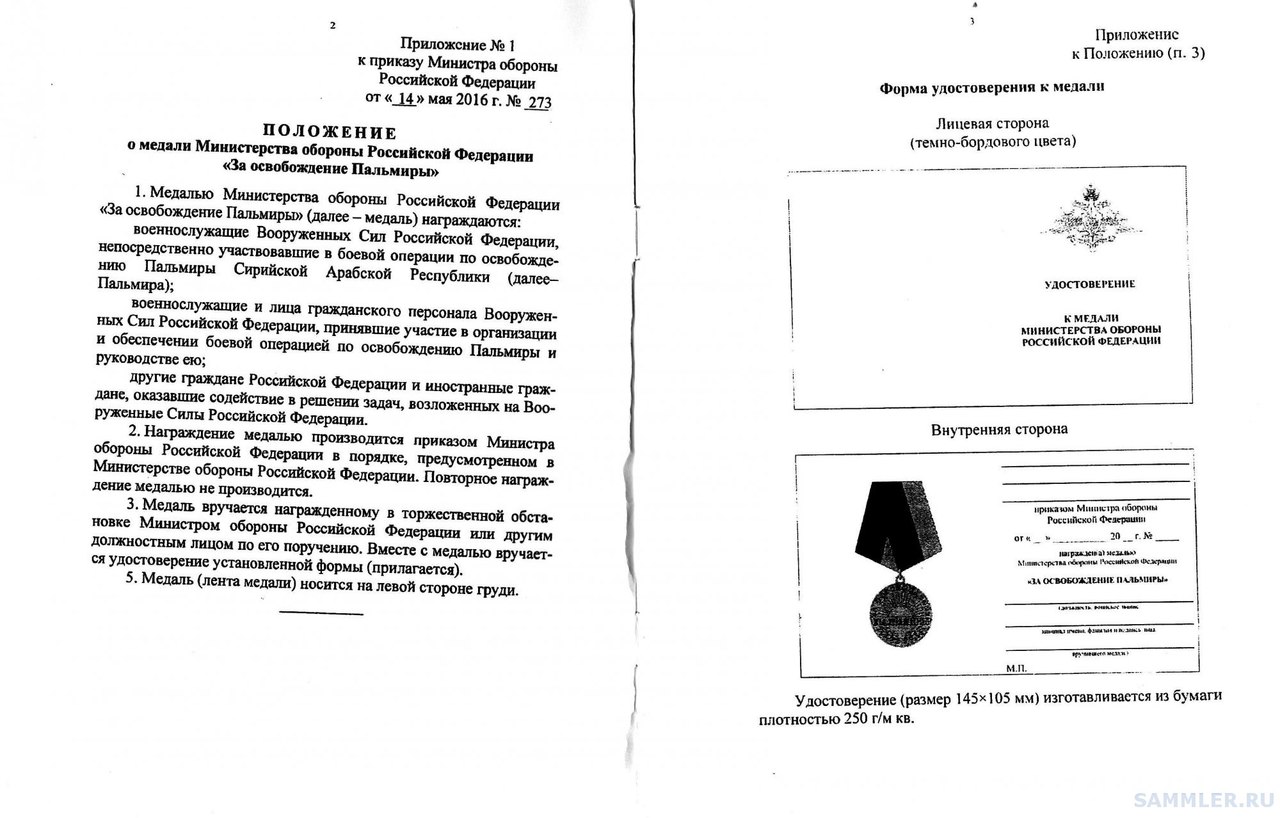 For the Liberation of Palmyra – the description of the award 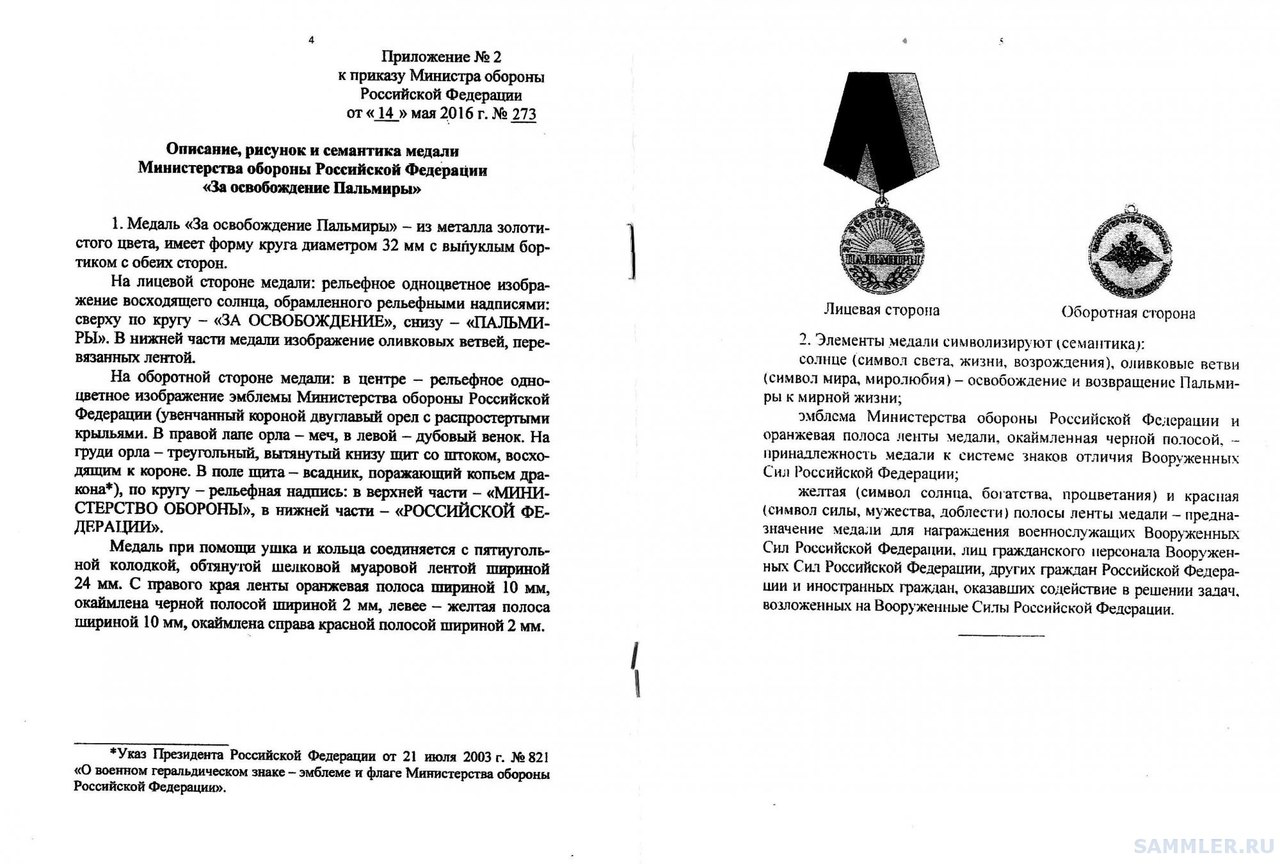 For the Liberation of Palmyra – the appearance of the award

The medal was established officially on May 14, 2016. On May 16, this award was first mentioned on the website of the Russian Ministry of Defense: [17] for the participation in the concert in Palmyra it was awarded to Valery Gergiev [18] and to the musicians of the Mariinsky Theatre Orchestra. One of the most infamous awardees was the “virtuoso cellist and financier” Sergei Roldugin (story [19], archived [20]) implicated in the money laundering scandal connected to the wealth of Putin. 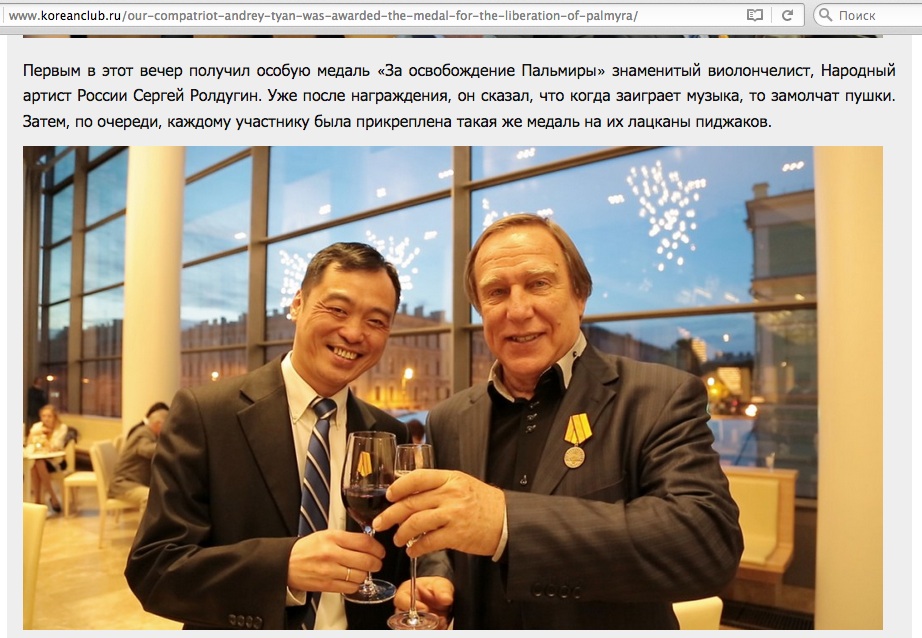 Cellist Roldugin, the liberator of Palmyra

For the Capture of Palmyra (Syrian Version of the Award)

However, there are some oddities in it. Apparently, there are two versions of the medal for the liberation of Palmyra: one for the citizens of Russia (we can see its ribbon in the photo of the Russian Ministry of Defense and in the materials on awarding Roldugin and Co.), it is described in the Order of the Minister of Defense; and the second one for foreigners, with the green bar and the improvised flag of Syria. 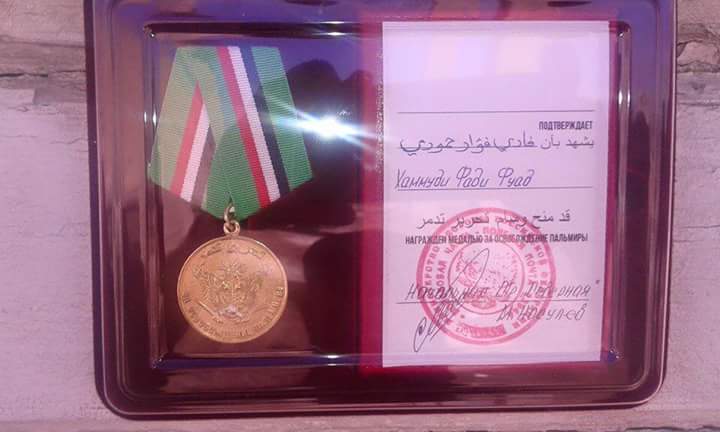 The photos of such medals were posted as early as on April 23, 2016, when the Russian command decided to award Tiger Forces special force unit of the Syrian Arab Army (story on Al-Masdar News [25], archived [26]). The undated medal blank forms are signed as “M. Nosulev, Head of Severnaya gr.”; the medal description and the names are duplicated in Russian and Arabic. On the Internet you can find references and blank forms to at least three awardees:

Probably, the medal papers were signed by major-general Mikhail Nosulev [27], the former deputy commander of the 29th Army of the Eastern Military District, a participant of military operations in Afghanistan, Chechnya and Georgia.

It appears that the first awards for non-Russians (on April 23) were made a few weeks before the medal itself was established officially (on May 14).

For the Demining of Palmyra

Creativity of the Russian Ministry of Defense has not run dry at that. After the capture of Palmyra, the time came for Russian sappers to clear mines in the ruins of the ancient city and neighboring areas. It was for these actions that special medal For the Demining of Palmyra was established on May 16, 2016. 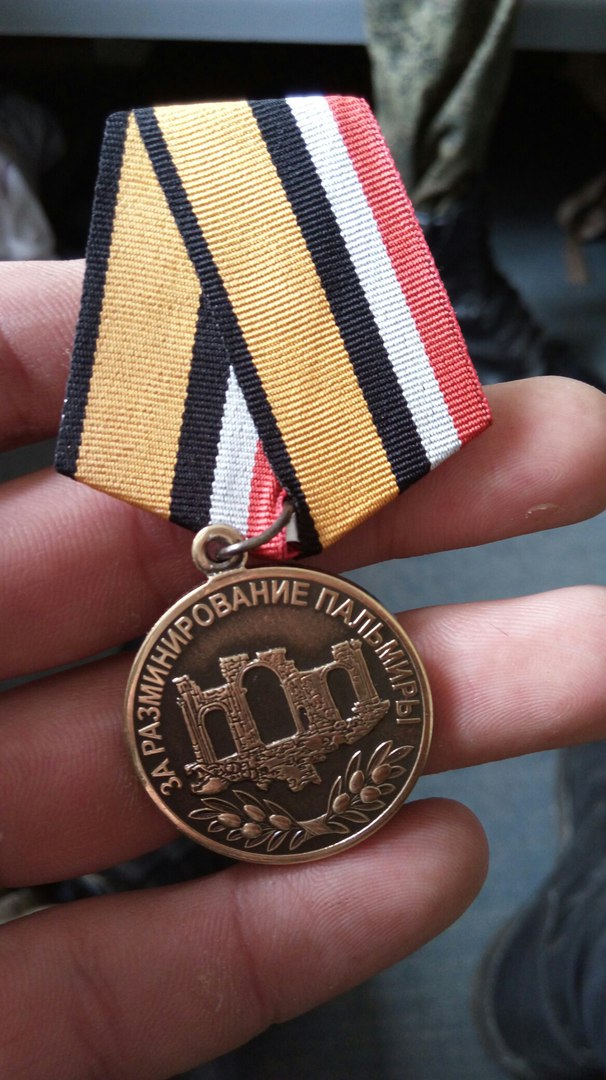 Medal For the Demining of Palmyra 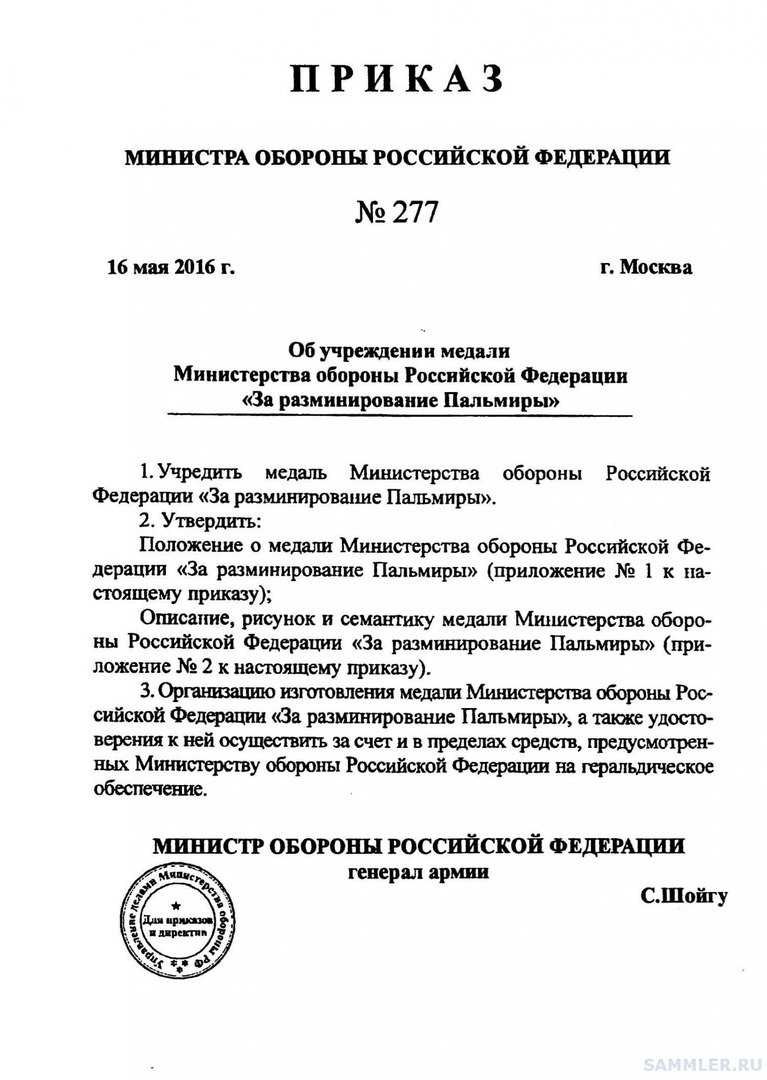 For the Demining of Palmyra – the order 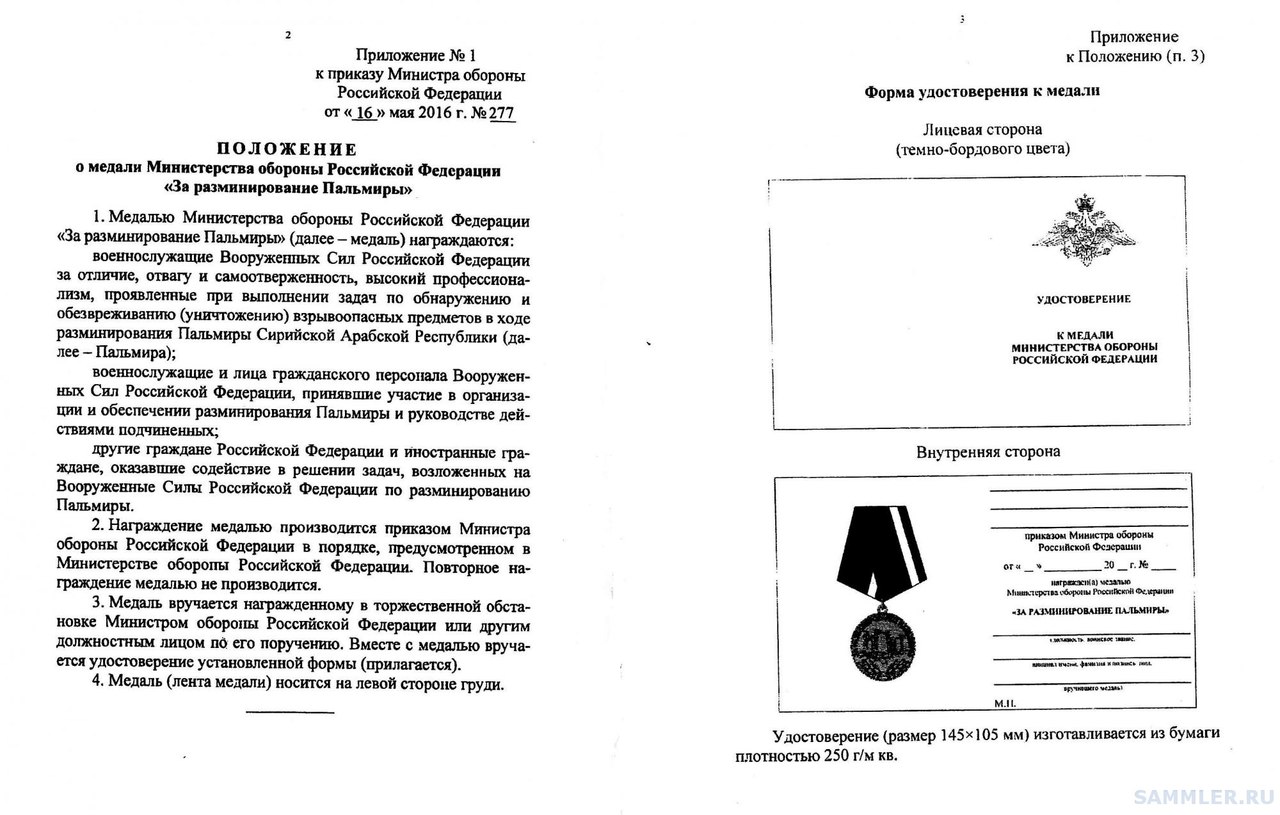 For the Demining of Palmyra – the description of the medal 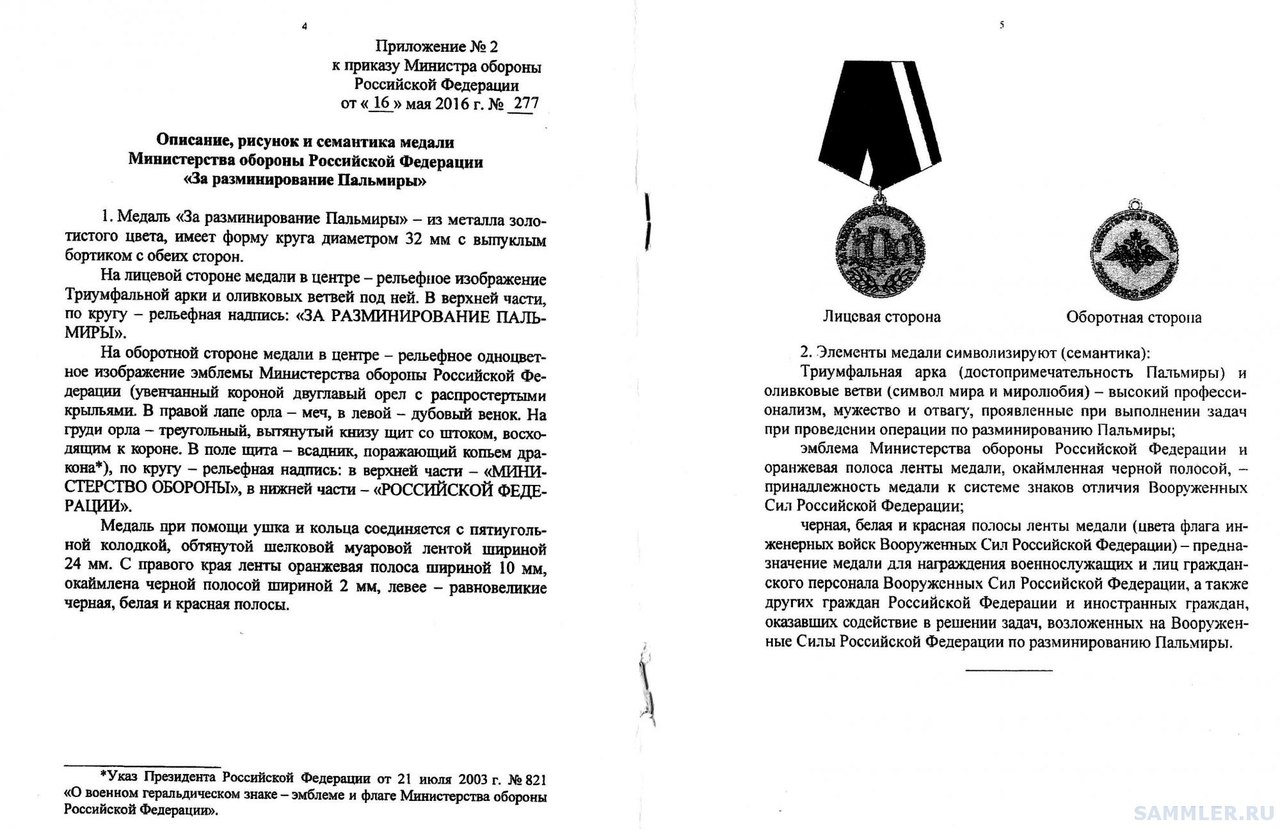 For the Demining of Palmyra – the appearance of the medal

For now, only two cases of awarding this medal are known:

It is unclear, why it was necessary to establish a new medal for an ordinary local operation. For the sake of several dozens or hundreds of awardees, a special award was invented, although there is a special departmental medal For Mine Clearing for cases of this kind.

By extension, it could be possible to establish an award for a successful delivery of cargo, exemplary patrolling, or a successfully dug trench. However, one stops wondering what is going on, when one remembers that most medals (more than 30) were established after Sergey Shoigu became the Russian Minister of Defense. Awards are made for participation in tank biathlon, staff exercises, “for merit in military logistics” or “for diligence in ensuring road safety” etc. Apparently, it becomes increasingly difficult to serve in the Russian Army and be left without a medal.

It is also worth remembering that there is one more award being handed out at different times for the participation in the Syrian operation. This is medal For Strengthening Military Cooperation. 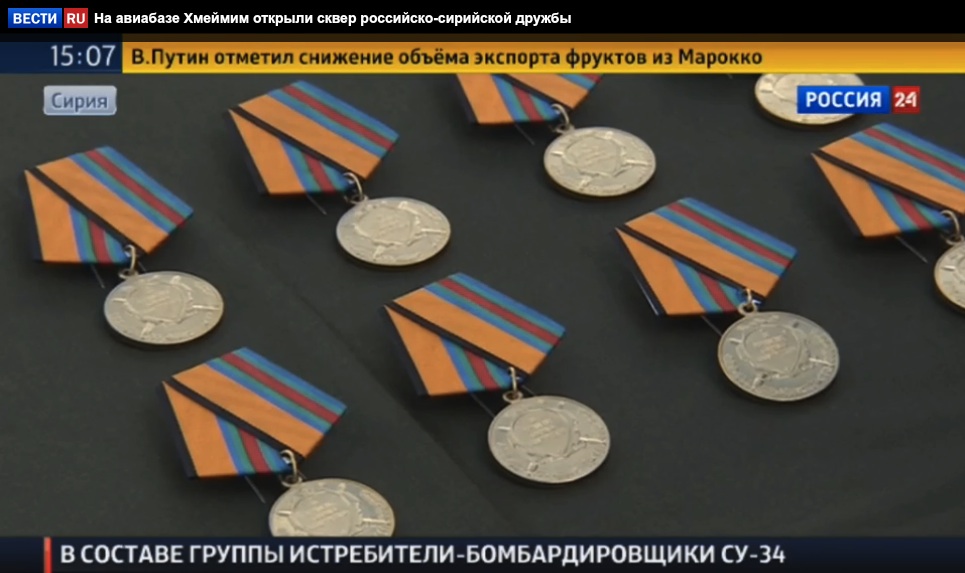 Medals For Strengthening Military Cooperation at the Khmeimim airbase

As we can see, in addition to the military mission, this medal is also used for diplomatic ends.

This publication was prepared by Anton Pavlushko [44], an OSINT-expert of the InformNapalm international volunteer community.