The Russian aggression in Ukraine started with the treacherous invasion of Crimea, when in the days of political uncertainty following the popular Euromaidan protests and the escape of Ukraine’s President Viktor Yanukovych, in a swift maneuver, Russian soldiers stormed and seized all government buildings and strategic facilities. They had no insignia, wore balaclavas, and remained silent when approached with questions. Less than a month after the landing of “the little green men,” Russia staged a fake referendum and annexed the Crimean Peninsula.

The covert operation in Crimea was Russia’s first test of its new approach to warfare in Ukraine. It was clearly successful, and within several weeks of the annexation Russian military personnel with their weapons, gear and equipment started flowing across the border from mainland Russia into Eastern Ukraine. At first those were small teams carrying only small arms, but gradually their numbers grew and their weapons became more varied and deadly, from machine guns to grenade launchers to howitzers and tanks. This creeping military buildup without official declaration of war was a part of Russia’s hybrid strategy seeking to gain control over the territory of Ukraine, while doing its best to convince other nations that this was a strictly internal conflict. At the time when Moscow kept sending trained servicemen and mercenaries with fake IDs and Russian made weapons to Ukraine, Russian Foreign Minister Sergey Lavrov employed the tactics of denial and was ridiculing the idea of Russia’s involvement in Ukraine in his speeches.

Russia was also fueling the conflict by funding local groups, led by people who could hardly conceal their shady business and criminal connections. Racketeers, smugglers, gangsters, and mob muscles together with corrupt local officials, all generously funded by Moscow, made the backbone of the pro-Russian movement. This patchy crowd was spearheaded by warlords like Igor Girkin a.k.a. Strelkov, Igor Bezler a.k.a. “The Imp”, Arseny Pavlov a.k.a. “Motorola”, and Alexander Mozhaev a.k.a. “Babay”, all of them imported from Russia.

The tactics of “ambiguous warfare” bore fruit, and by the end of spring 2014 approximately 7% of Ukraine’s territory was under the control of the Kremlin’s puppet leaders, and Russia had the ambitious plan to extend its control over the rest of Donetsk and Luhansk Oblasts (provinces), and, additionally, occupy Kharkiv, Dnipropetrovsk, Zaporizhia, Mykolaiv, Kherson and Odesa Oblasts.

This plan could become real, if not for the desperate resistance of Ukrainians who, despite the terrible state of the underfunded and weakened Ukrainian Armed Forces, managed to organize and equip volunteer battalions that reinforced and revitalized the old-fashioned and slow-to-react Ukrainian Army.

This quick progress undermined Russia’s far-reaching plans, and Moscow decided to double the efforts by sending to Donbas MANPADS (there were at least 7 proven cases of aircraft losses to MANPADS), fighter jets (on July 16 a Russian MiG-29 shot down a Ukrainian Su-25), and surface-to-air missile systems (at least 2 confirmed cases of military aircraft losses and most likely the downing of the passenger Boeing 777, flight MH17). In August 2014 hundreds of Russian military vehicles and thousands of Russian regular army troops crossed into Ukraine, and Ukrainian towns and villages were subjected to heavy rocket and artillery bombardments. There was also extensive evidence [1] of Grad rocket attacks on Ukrainian territory across the border from Russia.

Massive bombardments were resulting in significant civilian casualties and kept devastating Ukrainian communities. Ukrainian military commanders were at a loss, for they did not expect Russia to intrude so openly and bring the fighting into densely populated areas on purpose. Ukrainian field camps were easy targets for Russian artillery. The situation became unmanageable. People were escaping the war zone, whole towns were cut off from water and power, grocery stores were running out of food supplies. Humanitarian situation was critical, and it affected the course of action. Unable to effectively attack the enemy without risking high civilian losses, Ukrainian fast-moving counter-offensive broke down.

Starting from August 2014, violent clashes were taking place everywhere along the front line. On September 5 Ukrainian representatives were forced to sign Minsk Protocol aimed to achieve bilateral ceasefire with Russian terrorist forces and avoid more casualties. However, it did not help. By January 2015 fragile ceasefire completely collapsed leading to one of the most dramatic battles of the war – the Battle of Debaltseve. The town was heavily shelled by Russia-backed forces, and thousands of residents fled the city under constant bombardment. Despite the attempts to hold the city under government control and the new Minsk II ceasefire agreement signed on February 11, 2015, the fight intensified. On February 18 Ukrainian forces made the difficult decision to withdraw.

Since that time the war has been going through the ever-changing periods of simmering hostilities and sharp escalations. Stable ceasefire has never been achieved. Although Russian forces never achieved their goal to expand the zone of control, the Kremlin has not abandoned its plans to seize more territories of Ukraine. Those plans have simply been put aside to wait for an opportune moment. Meanwhile Putin is looking for alternative ways to convince the United States and EU member states to lift economic sanctions, restore relations with Moscow, and turn a blind eye to the Russian invasion of Georgia and Ukraine, its violations of the UN Charter, Budapest Memorandum, Russian-Ukrainian Friendship Treaty, and a whole range of other international treaties. Time will show how much longer Putin will be able to curb his appetite before he realizes that no one is going to help him with his aspirations. 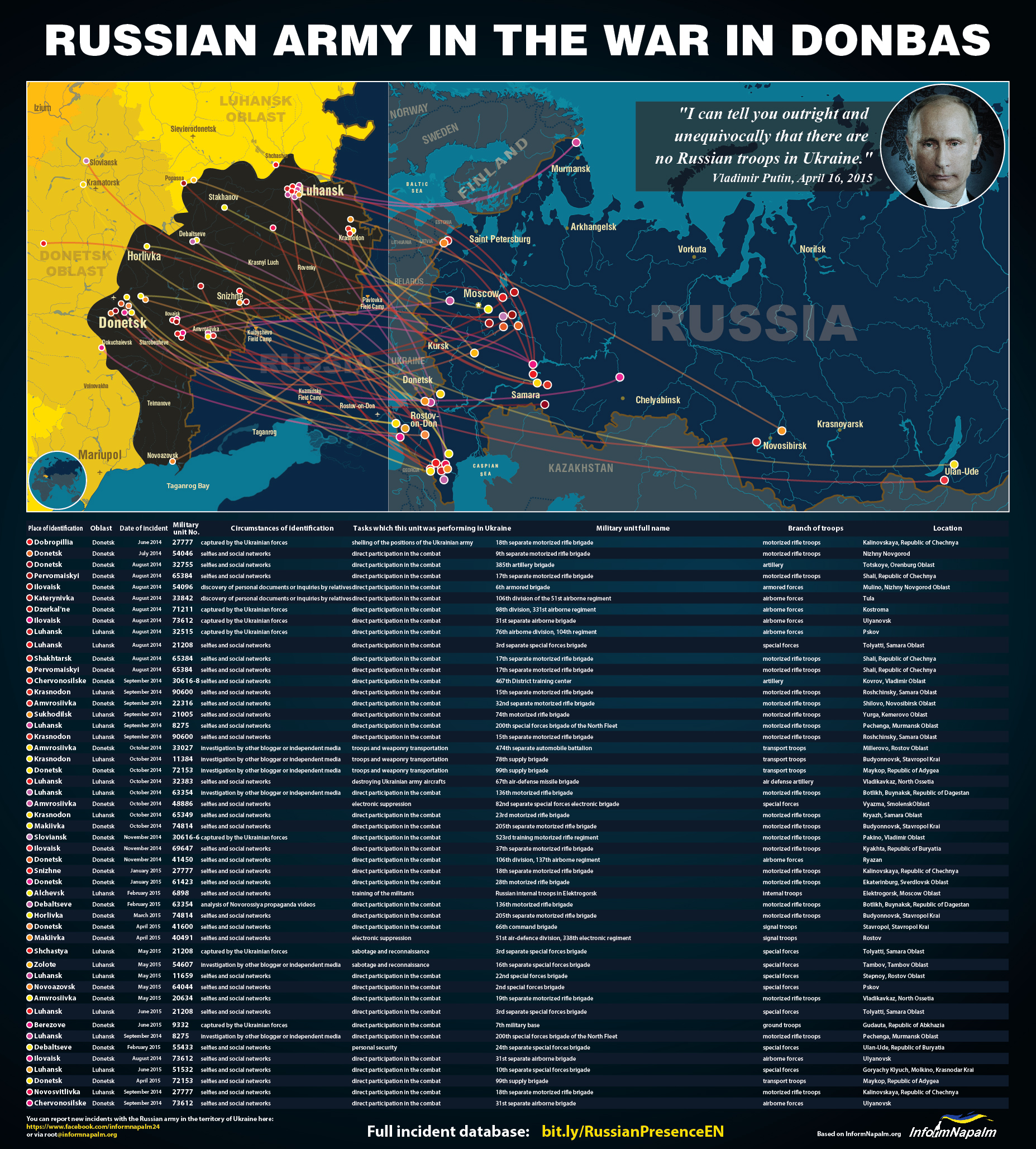 [2]While it has never been a great secret for Ukrainian locals that Russian regular army actively participated in the fighting in Donbas, it is not an easy task to prove this fact to the international community. Russian troops have been pretty cautious and diligent in covering up their crime: they paint over the markings on their vehicles and tanks and avoid wearing any insignia that could link them to the Russian Armed Forces. Many Russian officers also carry fake IDs, and all regulars pretend to be volunteer fighters or mercenaries who terminated their military service just several weeks before the ‘trip’ to Ukraine.

This odd coincidence, when thousands of Russian soldiers and officers abruptly end their military careers and mysteriously surface in Ukraine, does not seem to bother Russian military commanders – because in reality all of this is being done by their orders.

“They spoke Russian with an accent different from that of Ukrainian residents. And they used dialect words that can only be heard in some areas of Russia.”
“This is not a proof.”

“They wore Russian type camouflage uniforms.”
“This is not a proof.”

“They carried brand new Russian rifles.”
“They could have gotten them anywhere.”

“They annexed Crimea, our territory.”
“They did, but it does not prove they are fighting in Donbas now.”

However absurd this may sound now, such dialogues really took place back in 2014.

Ukraine faced the denial of the obvious. In part because Russian officials kept rejecting all accusations. In part because Russian government-sponsored media operating abroad swamped the world with outright lies about the political situation and the war in Ukraine. In part because no country wanted to confront Russia – it is rather uncomfortable to stand against a nuclear weapon state. In part because most countries cared more about continuing their trade with Russia than about the deaths and suffering of Ukrainian citizens. Yet, we are not to judge others – we just want to explain what made us start looking for indisputable evidence of the Russian military involvement.

InformNapalm team decided to debunk Russian false claims and back up the truth with hard evidence of Russian military involvement in Ukraine. We mostly used open sources of information – official websites, reports, videos, satellite images and social media posts – to glean the full picture of Russian military activities and present it to international community.

How to navigate through our data

How to use this database: You can simply look through all data cards and click different links to InformNapalm investigations for the details. The database contains over 150 data cards, so do not forget to click “Load more”, if you want to see all records.

How to use the interactive map: You can click on any color dot to view more information about the identified units. Please note that all units are colored according to the military type they belong to. Please click the drop-down list “Colored by military type” to view the legend. You can also select “Explore” to access advanced options, such as filtering.

You are welcome to use this information on your web page. All materials on InformNapalm.org come under Attribution CC BY License which makes it easy for journalists and bloggers from all over the world to spread the word.

InformNapalm [12] does not receive any financial support from any country’s government or large donors. Only community volunteers and our readers help us to maintain the site. You can also volunteer or support the development of the unique volunteer intelligence resource InformNapalm with your donations through Patreon [13]