In early February, InformNapalm volunteer intelligence community published a series of OSINT-investigations, which reviewed the Russian propaganda techniques during the staged provocative shelling of the occupied territories in Luhansk and Donetsk Oblasts.

These conclusions were also confirmed by independent foreign journalists [1].

For more details of these investigations, please see:

– Who and why is shelling Donetsk: one incident [2];

– Another provocative shelling of apartment building in Donetsk [3];

But using the staged attacks is not the only media technique of Russian-terrorist forces.

To create a favorable depiction of events, Russian propaganda uses other methods of disinformation, for example, fake reports about invented incidents, in order to accuse the Ukrainian side of terrorism.

As an example, let’s analyze the staged video by Russian propagandists from the News Front channel, who, unwittingly, keep supplying us with the materials for analysis of the Russian presence in the Donbas.

So, let’s watch the video, titled: “A fighter of Donetsk People’s Republic (DPR), recruited by the intelligence agencies of Ukraine, talks about the placement of an explosive device”.

– Why did Russian military place storage depots in the close proximity of a densely-populated area, if they are really concerned about civilians?

– Why “recruit” some militant, carrying out a complex scheme for the transfer of explosive devices, if you can either hit the warehouse with an artillery strike, or order the bombing using locally available explosives, avoiding the need to smuggle them in?

Regardless, these questions become pointless, once the exact location of the filming has been determined, revealing the nature of the staged scene.

Allegedly, the video was recorded in the urban-type settlement of Boykivske (formerly Telmanove).

However, in that area there is no parking of the tanker trucks of the so-called 9th Separate Motorized Rifle Regiment of the 1st Army Corps of Donetsk People’s Republic (DPR), military unit 08819 (tactical markings on the car: “59 in a circle”). 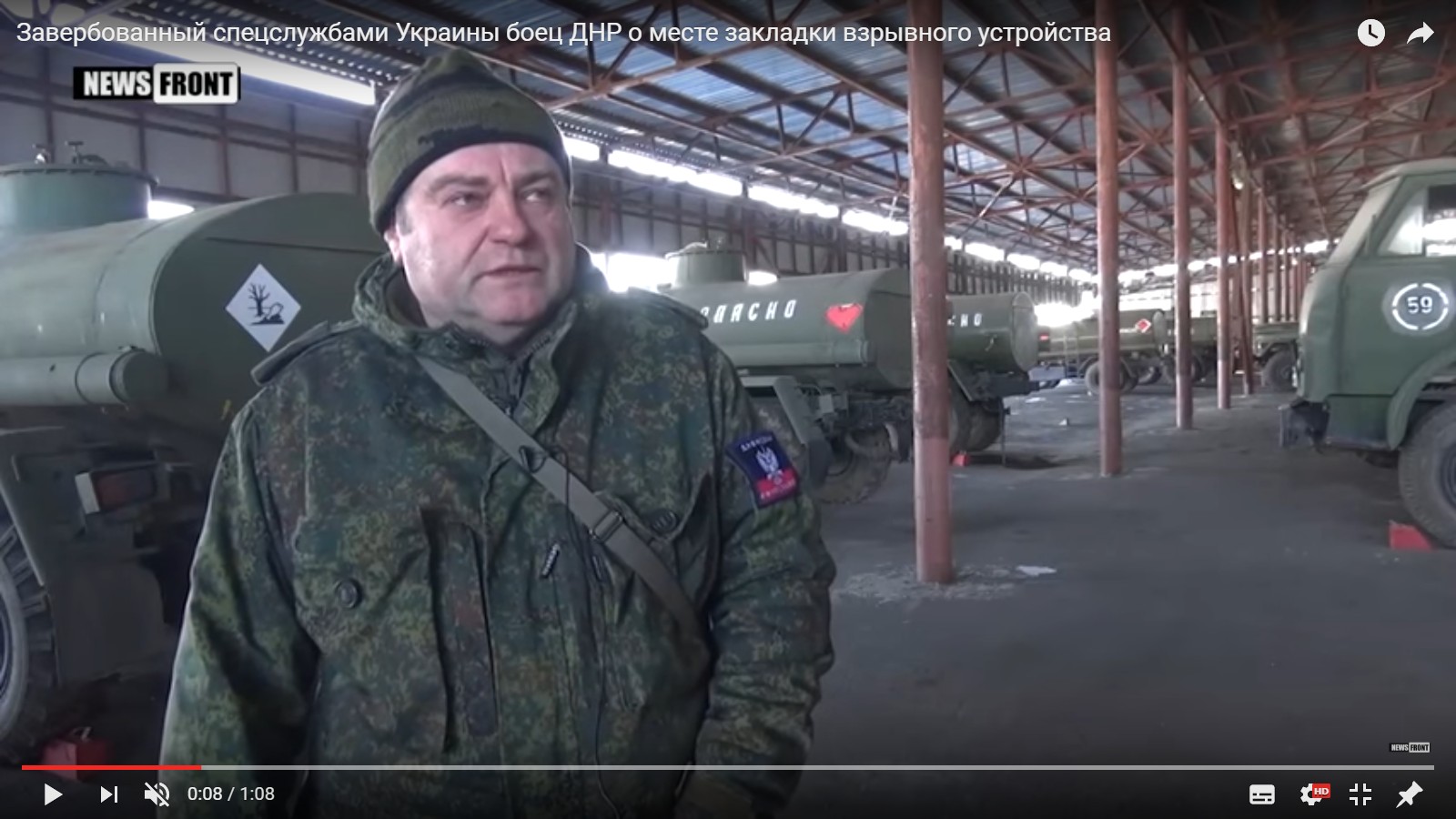 We have determined that in reality the truck park, where the recording took place, is located at the thrashing floor in the village of Markine [5], Novoazovsk Raion, Donetsk Oblast. 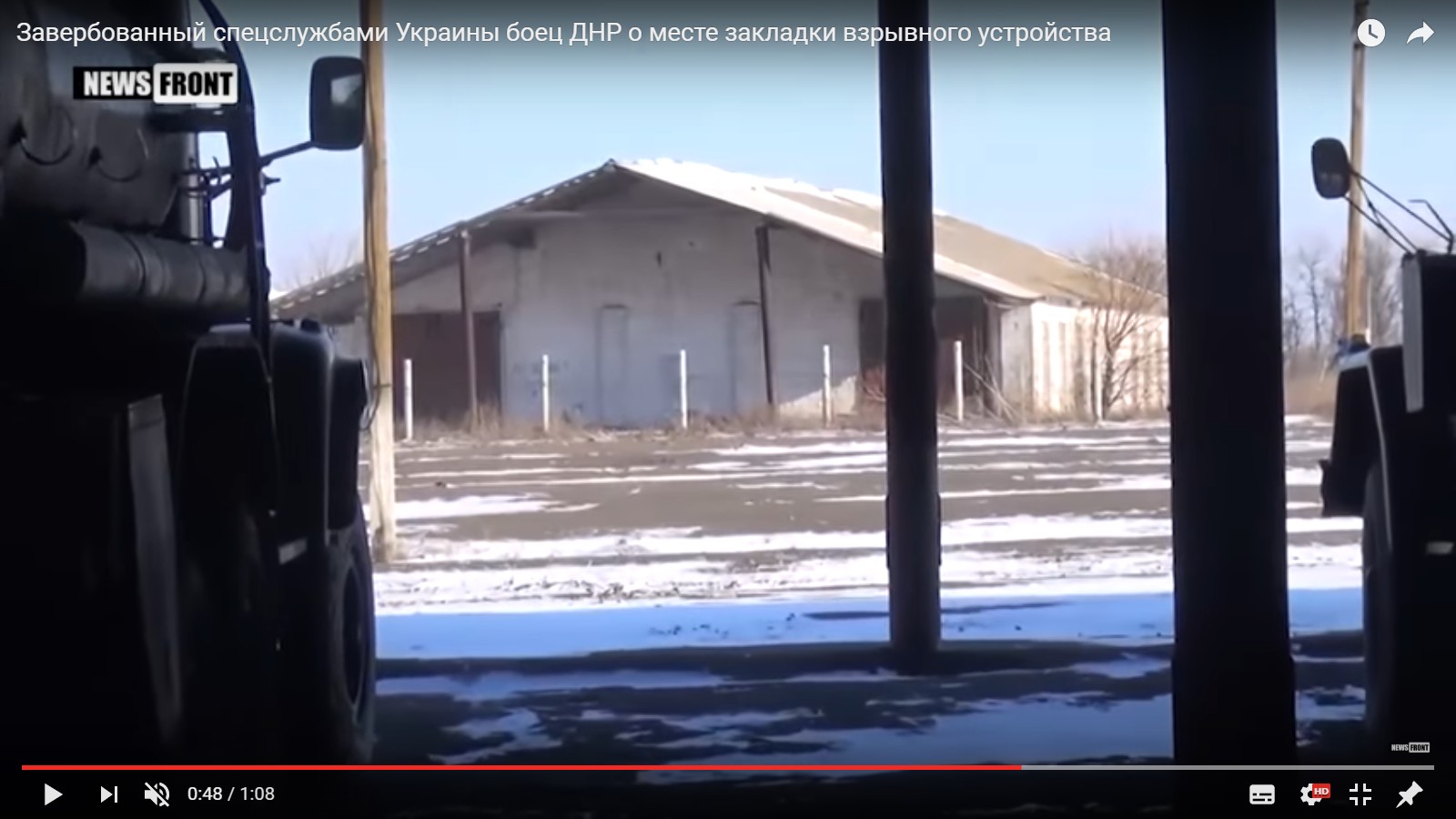 If the militants really wanted to document the circumstances of “recruitment” and make a video about the “plans to blow up the tankers,” why change the location of filming?

If the “junta” sent someone to blow up the warehouse, then its intelligence services knew where it was. Or maybe they didn’t?

There is another interesting detail.

And as recently as on January 31, 2017, Alexander Chernov in his Twitter said that more than 15 units of military equipment were moved from the so-called “storage” of the Russian invaders’ military equipment in the village of Markine toward Sakhanka and Pikuzy (formerly Kominternove), located at the contact line, 10 km from Mariupol. Thus, the discovered trucks are extremely important for logistical support of the Russian occupation force grouping aimed at Mariupol.

As we can see, a performance staged by “News Front” propagandists on a closer examination can also provide interesting intelligence.

This show by Russian propagandists fits well within the Kremlin’s handbook on accusing Ukraine of violating the Minsk Protocol and “the genocide of the Russian-speaking population” in Donbas. But if we remove the propaganda coating and analyze the photos and videos, posted by propagandists and militants, we can not only successfully refute their fakes, but also obtain useful data about their secrets.

[15](CC BY) Information specially prepared for website InformNapalm.org [16], an active link to the author and our project is obligatory for any reprint or further use of the material.

We urge readers to actively share our publications on social networks.Broad public awareness of these investigations is a major factor in the information and actual warfare