Everyone is talking about the ‘Russian-Syrian friendship escalation’ lately and we would like to explain what it is all about. More and more often the Russian servicemen are seen in Syria; the presence of the Russian weaponry was not a secret, but it seems to scale up nowadays. As it is well-known, Russia has the only base in the Mediterranean Sea – the 720th sustainment center of Russia’s naval forces, located in the Syrian Tartus harbor [1], where the support point of the Mediterranean squadron is deployed since 1971. However, after the USSR breakup Russians almost stopped any activities there, having just 4 employees and a repair team. It seemed to be a common case – there were plenty of abandoned military bases throughout Russia. But it was a little bit different here due to NATO countries presence and it was Russia’s only stronghold in the Mediterranean Sea – all that resulted in the fact that the base was not closed, and even it was planned to expand.

GRU Major General Yuri Ivanov inspected the Tartus base in the end of 2010. But he never returned home – his body was found near a Turkish village [2]. Was it an incident or ..?

Then the civil war in Syria started in March, 2011. The rapid advancement of Islamists could have endangered the only Russian base in the Mediterranean. Therefore, the medias  started to exaggerate rumors about Russia’s assistance the regime of Bashar Assad. Steshin and Kots, the ‘Komsomolskaya Pravda’ reporters,  were choosen to calm down the general public [3]. These are the same brave journalists whom we will know by Donbas reports.

No matter how Russian authorities deny their participation in the Syrian conflict, the fact remains that the Russian ships started actively visit Tartus. And here comes ‘Nikolai Filchenkov’ – a landing platform/dock built in 1964-1975. An ‘old tub’, in fact, assigned to Russian Navy with main purpose to deliver cargoes. More information about LDPs in the Russian fleet can be found here (in Russian) – ‘According to experts, most LPDs will be decommissioned in coming 10 years [4]‘.

Of course, the Russians could use civil ships, but they would start sinking sooner or later. Just like general Ivanov. So, it was decided to use warships.

This is ‘Nikolai Filchenkov’ carrying something to Syria [5] in 2012-2013… The media frenzy calmed down, but according to the Russian seamen’s photos ‘Filchenkov’ used to call the port of Tartus on constant basis.

From the article about the maintenance of ‘Nikolai Filchenkov’ and ‘Novorossiysk’ LPDs after the mission completion off the Syrian coast (published by the Russian state news agency ‘RIA Novosti’ in January, 2013): “According to him ‘Nikolai Filchenkov’ had made around 8 thousands sea miles for the last half a year, having passed the Bosporus strait for 10 times and the Dardanelles strait for 8 times”.

Based on the information and comments in VKontakte public group “I served on LDP ‘Nikolai Filchenkov'” [6] (archived [7]): the ship regularly visited Syria starting from summer of 2012. And this year the LPD has been to the Mediterranean Sea for 3 times (in Russian): “The landing platform of the Russian Black Sea Fleet ‘Nikolai Filchenkov’ went to the Mediterranean Sea on its third combat service this year. [8]“. Here are the photos [9] of this ship passing the Bosporus in August, 2015: 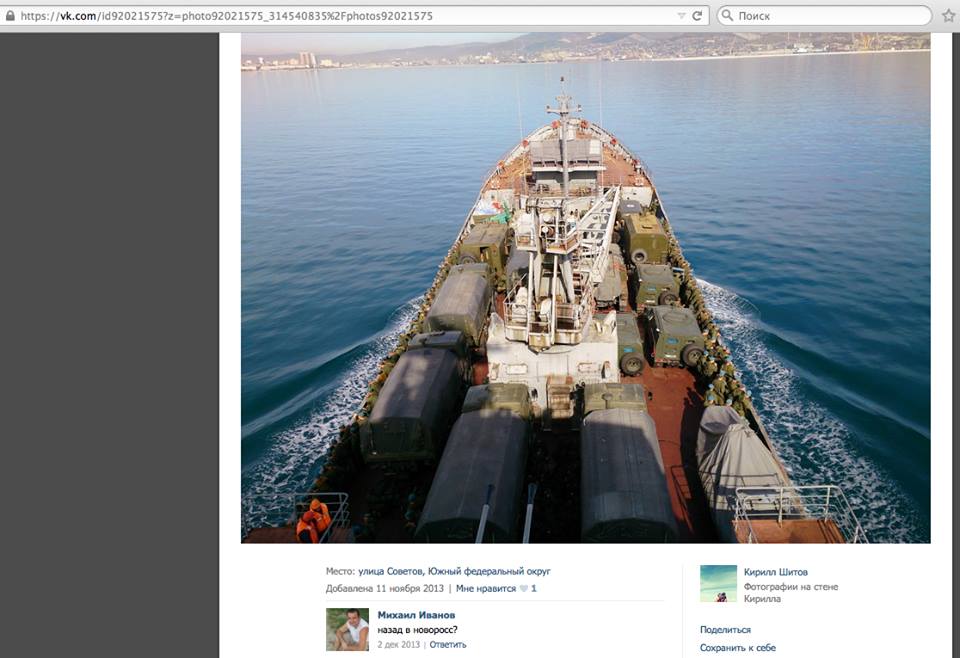 VKontakte stores 2 similar pictures of this warship – one made in September, 2015, and signed ‘Back to Syria’ and the other one from December, 2014, signed ‘do you remember our trip with paratroopers?’.

Most of the photos of the Russian seamen in Tartus appeared between 2013 and 2015 – these were the moved marines from Sevastopol (occupied Crimea, Ukraine) and soldiers from Maykop (Republic of Adygea, Russia). The training for the case of [15]… I think such case might happen soon (it looks like this is the photo of that boarding during the Syrian trip in Decemeber, 2013).

Sailors of the following ships are the most frequent photo uploaders: landing ships ‘Nikolai Filchenko’, ‘Caesar Kunikov’ and ‘Novocherkassk’, submarine chaser ‘Severomorsk’, guard ship ‘Yaroslav Mudry’ and so on. As we can see, Tartus is visited by ships of the Black Sea, Baltic Sea and North fleets. One of the serviceman published the full training map as for December, 2014: 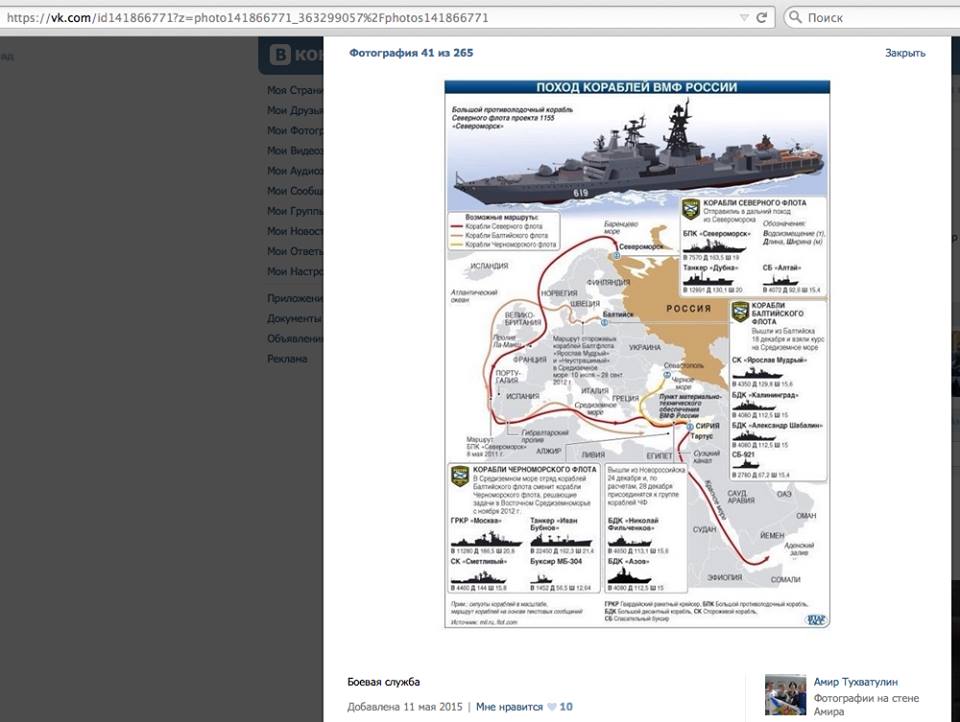 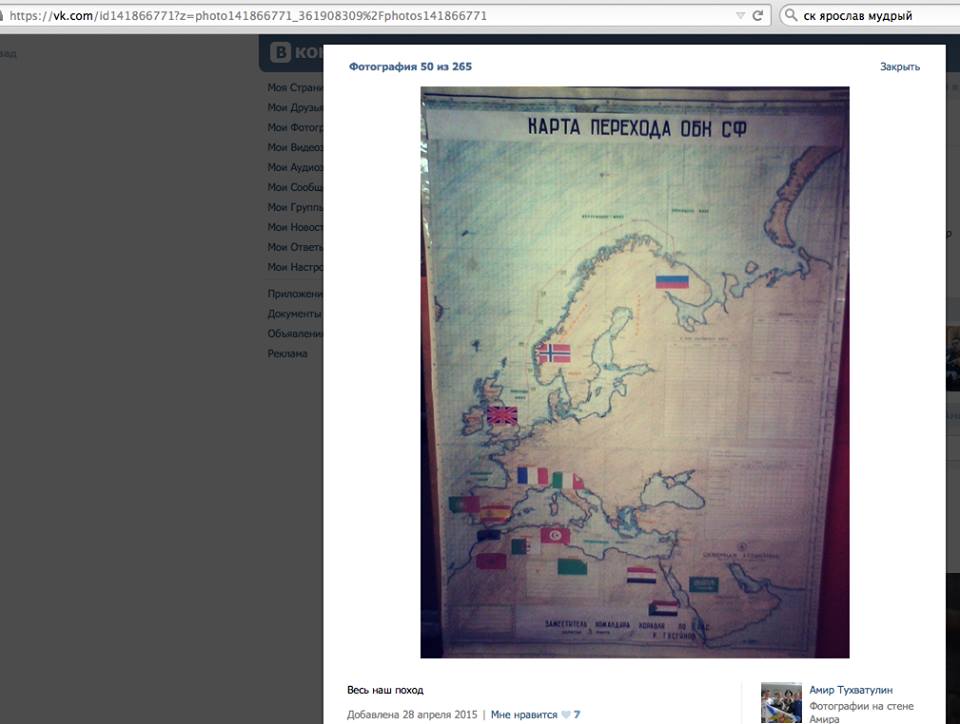 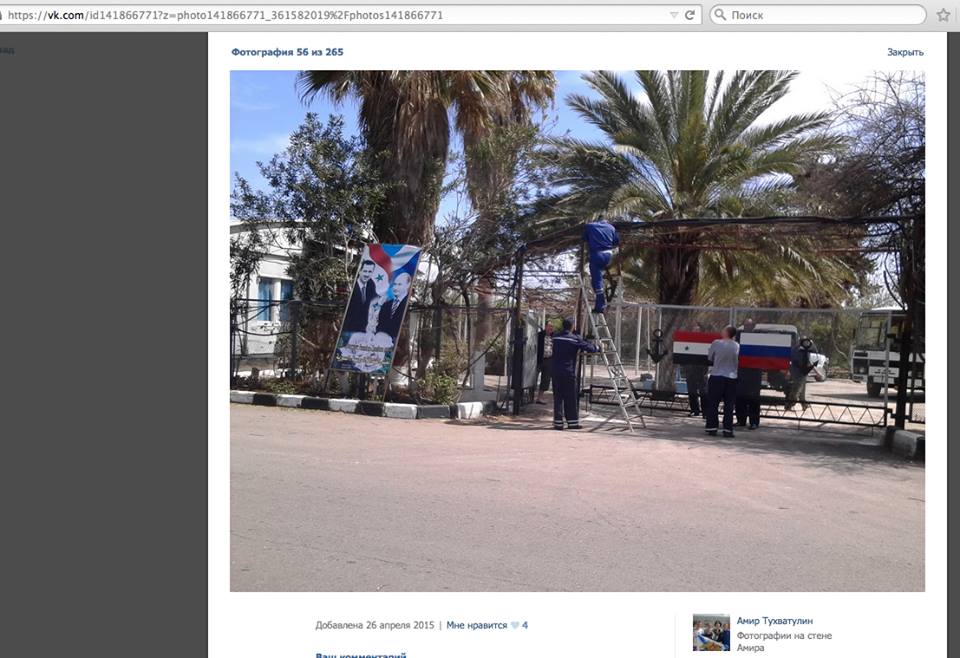 Speaking in general, out of the Syrian context, we can easily understand the Russian military activities in the Mediterranean. Nevertheless, Russia openly stands for Bashar Assad in this war and the continuous attending Tartus by the Russian warships definitely will not stop the bloodshed in Syria. The role of Russia in this war becomes clear as never before when the Russian military equipment appears on the side of Assad’s army.

Eventually, Russia supplies Assad’s regime with the weaponry and equipment through the Tartus outpost for the last 2-3 years. In such a situation the Middle East will long be restless. Refugee flows will occupy the minds of European bureaucrats and the general unrest in this oil-producing region will spur the price of oil.

The press has long been rumored that Russian military experts are helping to keep the port of Latakia, which is located north of Tartus. However, the real purpose of the Russians – to keep Tartus at all costs. Slowly the rebels are getting closer to Latakia, and when it falls the next target would be the ‘Russian’ Tartus. The city of Homs is located 100 km to the East of Tartus and borders Islamic territories – in the worst case scenario Russians may loose Tartus in few hours.

Russia has decided to get involved in the conflict to uphold their only stronghold in the Mediterranean Sea. The goal is clear, and the Russian marines will have to pay the price. Well, they do not have to get used to die for the imperial ambitions of their leaders.

P.S. Could the former Ukrainian servicemen sided with the Russians in 2014 think that in a year they will have to die at Tartus and Homs in the interests of Putin? However, there is no sense to spare the traitors…