Terrorist War of the Russian Federation against Ukraine, Eastern Front: Summary for September 1, 2014 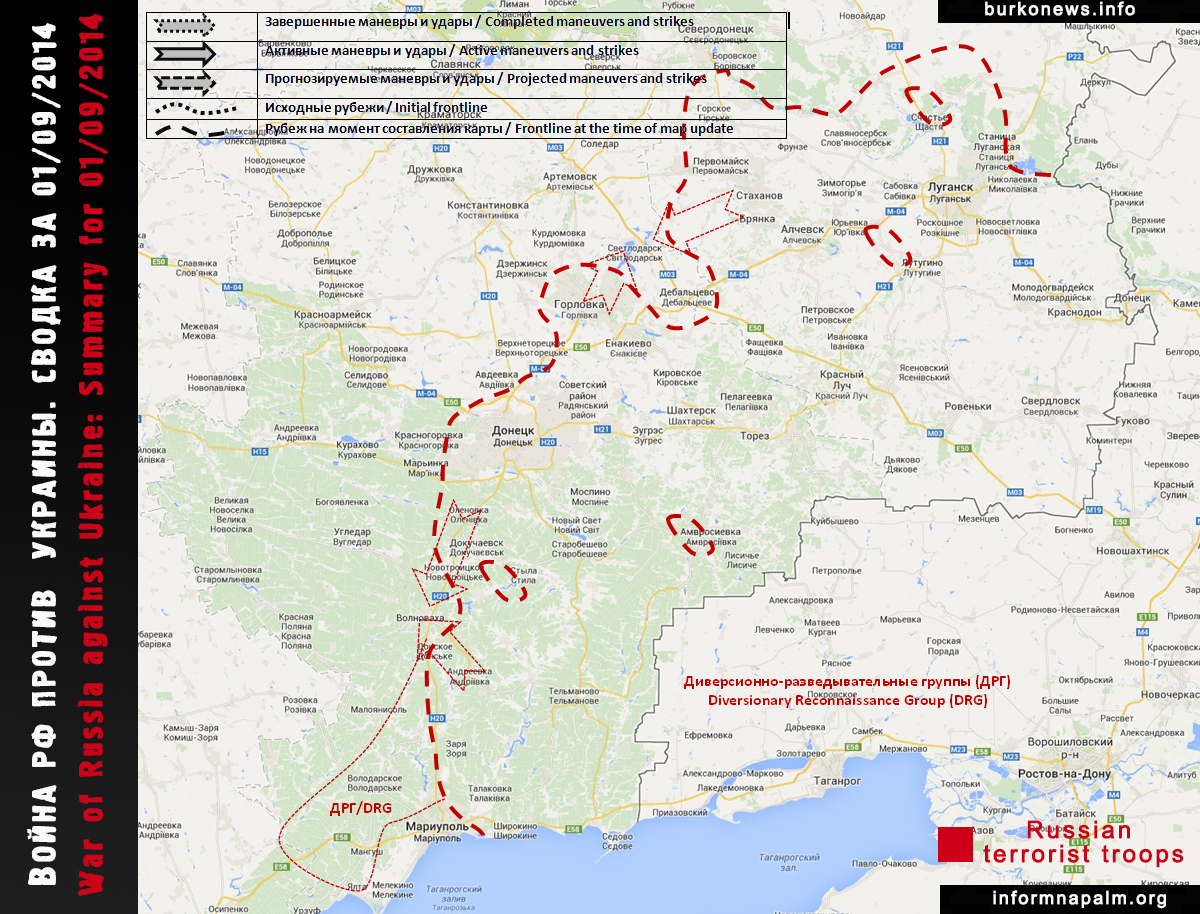 Due to objective factors we have had to take a break in posting information and analytical data regarding the course of “Anti-terrorist operation in Donbas”. Starting from August 21 we decided to call a spade a spade, namely that this is a TERRORIST WAR OF THE RUSSIAN FEDERATION AGAINST UKRAINE.

We see that after a week of our silence, and the unfolding of recent events, the criticism of those who considered our forecasts exceedingly skeptical and unlikely has cooled a lot. The possibility of the enemy striking towards Mariupol, the large-scale accumulation of heavy weapons by Russian militants in order to attack in multiple directions, and the entrapment of Ukrainian forces (as a result of malevolent or unintentionally ignoring the need to provide adequate covering forces); all this we repeatedly identified as potential dangers during the past month. However, `the train has left the station’ and it does not make sense to dwell on the past.

In terms of the Map for this summary report we have decided to only chart the enemy’s location (in red), along with his projected directions of attack. By leaving off the location of Ukrainian forces we avoid any danger of alerting the enemy to their positions and to potential Ukrainian maneuvers. While this may hinder the visualization of the situation, it is necessary.

The Status of Military Operations

Many stereotypes have been broken since our last summary. Many claimed that Putin would never openly invade Ukraine; that he would only continue to support terrorists in Donbas and therefore ATO forces would slowly encircle and squeeze the militants out of the areas they hold. Clearly these predictions have failed to come true. As we had previously predicted the enemy has begun to implement its plans for a full-scale military operation in the south of the Donetsk and Luhansk regions. Russian militants managed to bring in significant forces via Border Control Point (BCP) Marynivka in the Donetsk region, and move them along the border towards Markyne (near Novoazovsk). Everything that happened after that was the result of careful operational planning by the Main Intelligence Directorate of the General Staff of the Russian Federation.

After several days of fighting, the Ukrainian forces had to abandon Novoazovsk and had to divert forces towards Mariupol. Mariupol is preparing for defense now. Volunteers tapping enemy Zello channels report that there are messages about the presence of Russian diversionary reconnaissance groups (DRG) in Mariupol itself. Those groups are likely to attempt to destabilize the internal situation in the city during an external assault of approaches to the city by the main enemy forces.

There are also reports of the shelling of the M14 coastal highway and movement of Russian troops towards Yalta (west of Mariupol in the Donetsk region-indicated in the map as DRG actions). It is possible that enemy will reinforce this area with additional units.

The breakthrough by the Russians from the south has resulted in Ukrainian Forces being cut off in the areas of Amvrosiivka and Starobesheve. This has resulted in two pockets of forces behind enemy lines. These pockets are marked on the map symbolically in order not to reveal the exact position of Ukrainian forces. According to recent reports Ukrainian troops are trying to break out of the Starobesheve pocket. As for the Amvrosiivka pocket, it is located deep in the rear of the enemy forces and we can just hope that it is possible to settle the situation positively for them.

In the next few days, we expect attacks on Volnovakha. The recent report on intercepted information about the plans for attack by the Russian forces towards Kurakhove and Fashchivka proved not to be misinformation, and we can regard this as having been carried out already.

The Lutuhyne grouping of the Ukrainian forces failed to accomplish its mission without sufficient supplies. It will probably return to the main body of forces. As for the Luhansk airport, the Ukrainian forces had to withdraw in the afternoon (luckily, there were no losses). Now it is time to consider the destruction of the runway. If the runway is not destroyed it can become a springboard for enemy aircrafts, which is unacceptable – especially given the recent report about an airstrike by Russian aircraft on the ATO forces located near Shchastya. Taking into account that the enemy accumulated significant attacking forces in that area, the loss of Shchastya will open the way for the Russians to Novoaidar and then to Starobilsk.

There is also an impeding threat to Debaltseve because the ATO forces were expelled from the southern districts. There are currently ongoing attempts to seize the Donetsk airport. If the airport is seized, we can expect attacks towards Myronivskyi village from Horlivka and from the Pervomaisk – Stakhanov – Bryanka direction. This could result in another pocket in Debaltseve, and potentially the rapid loss of Artemivsk to the Russians. As for the Lysychansk – Rubizhne – Severodonetsk triangle, the Russian militants are unlikely to prioritize this area yet.

We realize that the news does not sound too optimistic. Of course, there are examples of heroism and the successful destruction of military equipment and facilities of the Russian aggressors. However it should be noted that we are considering the overall situation, focusing on changes to the fighting lines, and completed as well as projected, enemy attacks. It is impossible to cover all actions and changes in one report.

With such news the key is not to get depressed; this is the last thing that we expect from our friends and readers. It is also very important to make any efforts, as much as our capabilities allow, with full confidence and belief in the common cause. Each of us must contribute to win. It does not matter what role you play in the fight, everyone chooses the level of responsibility they can contribute. It is important to remember that any contribution, no matter how little it seems at first glance, can be the drip that will finally wear away the stone of the common trouble that has come to Ukrainian houses. You know, it has been said that something as small as the flutter of a butterfly’s wing can cause a typhoon halfway around the world.