For the anniversary of the Mariupol rocket attack, volunteers of the InformNapalm international community used open sources to gather information about the Russian officers involved in the killing of dozens of civilians. They established that after the attack Vladimir Putin promoted some of these officers to the rank of general and they’re still making their careers in the Russian Armed Forces. Some of them, considered to be especially reliable, were appointed by Putin’s classified order to positions in a “strategic Ukrainian direction”.

At about 9:25 am on January 24, 2015, residential areas of the Ukrainian city of Mariupol became the target of a massive attack from multiple launch rocket systems (MLRS). Under fire, 29 people died, 92 were injured. These casualties included children. The OSCE Special Monitoring Mission promptly investigated the site of the tragedy. Based on an analysis of the craters from the shells, mission specialists found that the Grad missiles were fired from the northeast direction, from the Oktyabr’ske settlement area, and the Uragan missiles – from the east, from the Zayichenko settlement area. These settlements are located 19 and 15 km away, respectively, and they were under the control of the Russian hybrid army, the so-called “DPR”. The former public leader of DPR terrorists Aleksandr Zakharchenko first announced an advance on Mariupol [1], however, the militants started spreading excuses through their own sources and Russian propaganda channels after learning about the results of the attack. The militants claimed not having any MLRS in the area and that the rockets came from the other side of the city – the area of the urban settlement of Staryi Krym. It was a very awkward lie coming from Russian federal TV channels’ studios, because all the videos and photos from the scene clearly showed rockets coming from the east rather than the west side of the city. 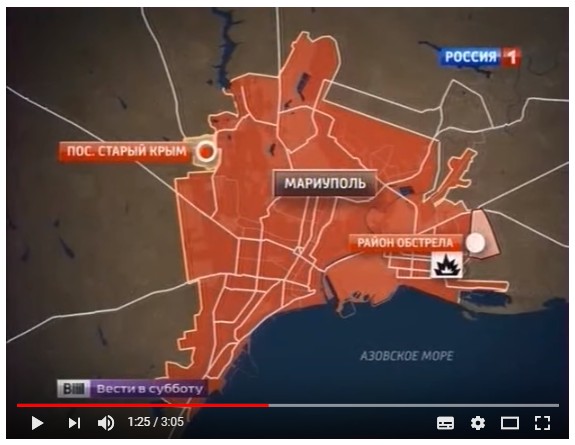 Also on May 7, 2018, the Bellingcat research group, which had previously obtained video and audio materials, submitted by Ukraine to the International Court of the United Nations, published an independent investigation [2] confirming the findings of the SBU on the involvement of the Russian military in the attack.

It should be noted that Stepan Yaroshchuk had been mentioned in the data of the Chief Directorate of Intelligence (GUR) [3] of Ukraine as the person responsible for artillery attacks on the civilian population of Mariupol, Ukrainian military units, and Ukrainian infrastructure from the territory of Russia as early as 2016. In the same year, Ukrainian intelligence reported that the Kremlin sent the uncovered Russian officers away from the Donbas to Syria [4], among them was Major General Stepan Yaroshchuk.

For the anniversary of the tragic events in Mariupol, the volunteers of the InformNapalm community decided to review open sources and find information about the later career path of the war criminals of the Russian Armed Forces who killed dozens of civilians in Ukraine.

Colonel Aleksandr Tsaplyuk, who led the shelling from the occupied Donetsk, became the head [5] of Penza Artillery Institute in June 2015 and now continues to share the experience of mass murder with Russian cadets. In December 2017 he was awarded [6] the rank of Major General. At the end of December 2018, he spoke [7] at the scientific and methodological conference of his institute.

The SBU also found that the 200th Motorized Rifle Brigade took part in the attack on Mariupol. Colonel Oleg Mussovich Tsekov has been commanding the brigade since 2011. 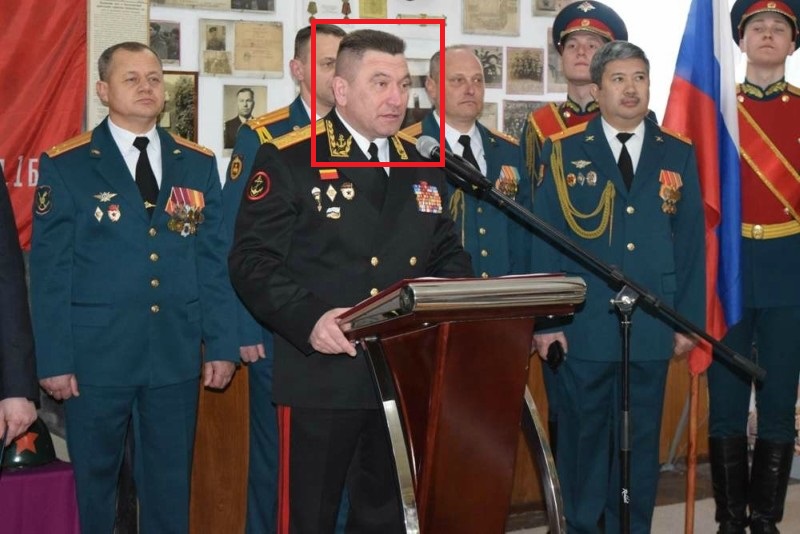 Photos [8] from the site of graduates of the Chelyabinsk Higher Tank Command School.

According to GUR, [9] during the fall of 2014 and the winter of 2015, he commanded the 2nd Motorized Rifle Brigade of 2nd Army Corps (Luhansk, Ukraine) of the Center of the Territorial Forces (Novocherkassk, Russia) of the Southern Military District of the Russian Armed Forces. He signed certificates to combat awards for participation in the war in the Donbas of the personnel of the 200th Brigade. 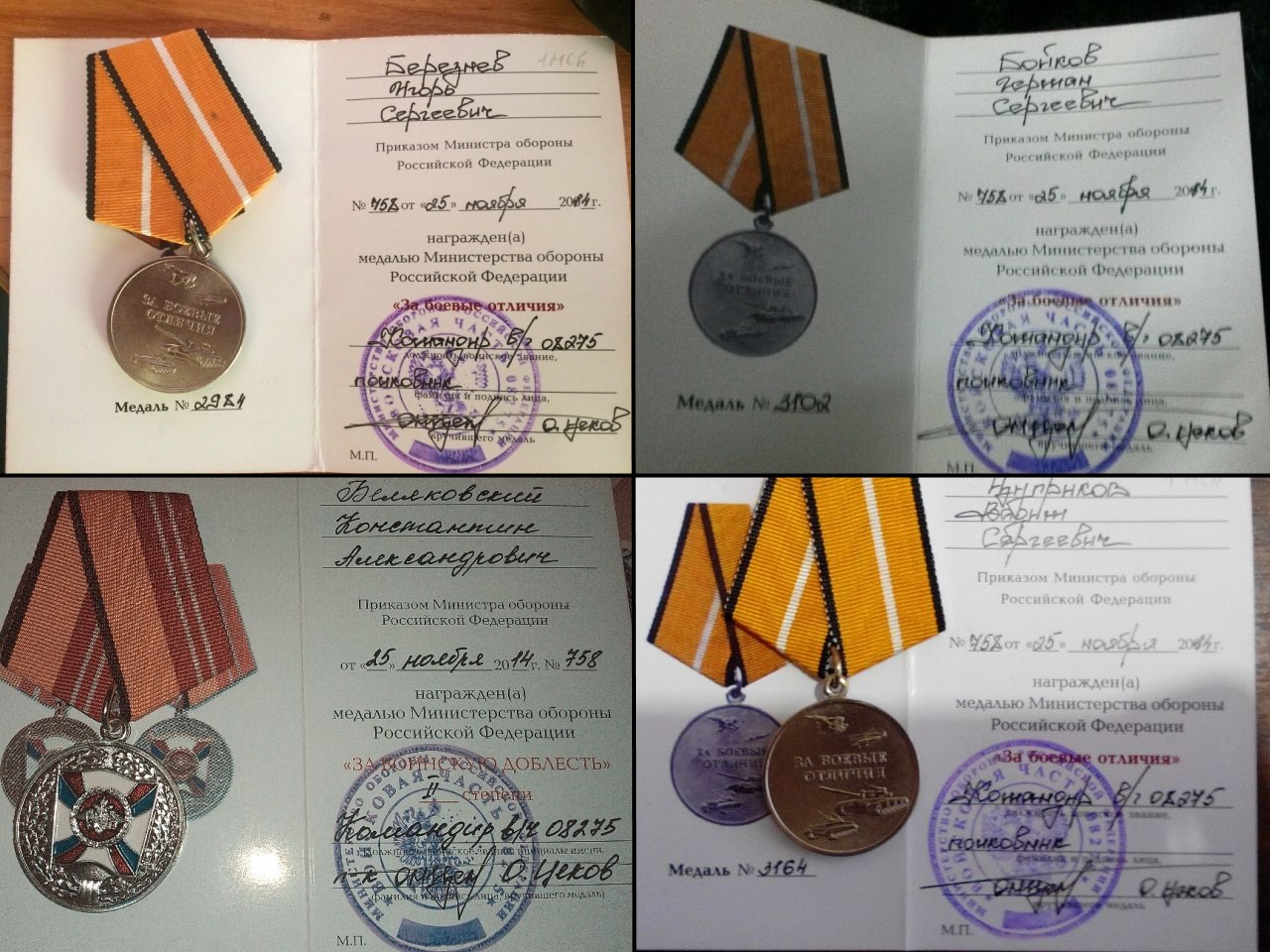 Screenshots from the blog of the investigator sled-vzayt [10]

In February 2015, Putin awarded him the rank of Major General [8]. On July 5, 2017, by a classified order, Putin appointed officers to the command of the 8th Combined Arms Army of the Southern Military District. In particular, Tsekov was appointed Deputy Commander of the army.

Notably, a source of the Kommersant magazine [11] in the military administration reported that the officers of the command of the 8th Army were selected with special care, giving preference to combat veterans, because the 8th Army and its 150th Motorized Rifle Division are deployed in a strategic direction, near the border with Ukraine.

In the position of the commander of the 200th Brigade, Tsekov was succeeded by Colonel Andrey Anatolyevich Seritsky. 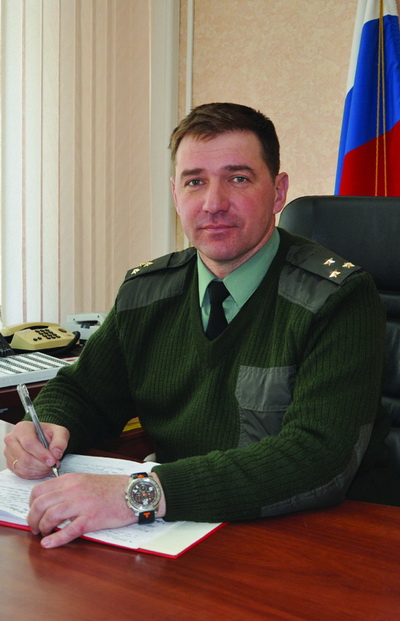 Photos [12] of the Red Star magazine

He signed certificates for combat awards for participation in the war in the Donbas in 2015 and in Syria in 2016 [13]. Prior to his appointment as the commander of the 200th Brigade, he was the commander [14] of the 212th District Training Center for junior specialists of tank forces (212th DTC [15]), military unit 21250. In December 2016, Putin awarded him [16] the rank of Major General.

The current commander of the 200th Brigade is Colonel Sergey Vasilyevich Pelipay. He has served in this brigade for a long time as a deputy commander and the chief of staff. 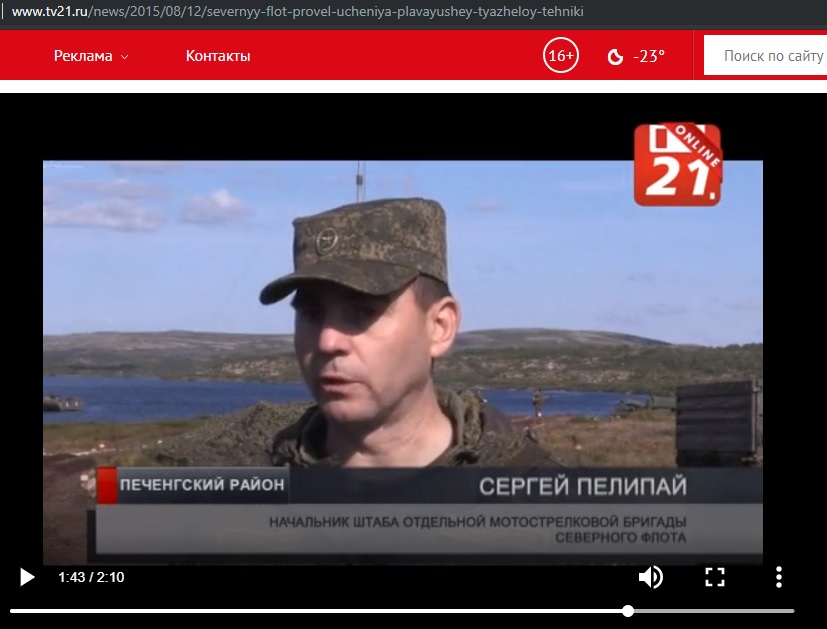 Sergey Pelipay fought in Syria. In August 2016, when Pelipay was still the chief of staff of the 200th Brigade, Syrian Defense Minister Fahd Jassem al-Freij awarded him [17] the medal “For merits in strengthening the military community and assisting in solving combat tasks.” The award was presented [18] by the commander of the Northern Fleet, Vice Admiral Nikolay Yevmenov. In May 2018, during the command and staff exercises of the coastal and land forces of the Northern Fleet of the Russian Federation, the commander of the 200th Brigade S. Pelipay said: “This time we organized a maneuverable defense using the experience gained during the fighting in the Syrian Arab Republic.” As Putin said, Syria was used by the Russian army for education and training [19]. That is, they did not just use the murder of Ukrainians for their practice, the also use the murder of Syrians for the same purpose.

Regarding the 2nd Motorized Rifle Division of the Russian Armed Forces, which was also included in SBU reports, its commanders were in different times:

Just like Tsekov, Andrey Sychevoy appears in Putin’s classified order appointing the command staff of the 8th Combined Arms Army. He became the fourth deputy [11] of Lieutenant General Sergei Kuzovlev [20], who also once led Russian hybrid troops in the Donbas.

Aleksandr Sanchik also [21] received the rank of Major General from Putin [22]. This is despite several corruption scandals associated with him, and a group of officers of the 136th Brigade even wrote [23] about Sanchik’s corruption when he was still their commander.

Thus, the Russian colonels who led the killing of people in Mariupol, have already been promoted, have become generals and continue to serve in the Russian Armed Forces. Russia does not officially acknowledge its participation in the war against Ukraine, but numerous evidence and leaks of information from the military testify to the lies of the Kremlin.

More than 2,400 personnel of the Russian military from more than 90 military units of the Russian Federation have already been recorded in the InformNapalm’ database of investigation [24], which is constantly updated with new information.

Translated by Andrii Gryganskyi, edited by Max Alginin.
An active link to the authors and our project is obligatory for any reprint or further public use of the material.
(Creative Commons – Attribution 4.0 International – CC BY 4.0 [26])
Repost and share with friends.
Follow InformNapalm on
Facebook [27] / Twitter [28]