Editors note:We are publishing an interesting article about the Kerch Bridge, which is called the construction of the century in Russia. The publication was prepared by Oleg Baturin [1] and Dmitry Lisunov [2]. members of the Media Club of public dialogue Eurospace, exclusively for the international volunteer community InformNapalm.

Workers are commonly deceived, while students work at “the Russian main construction of the century”. 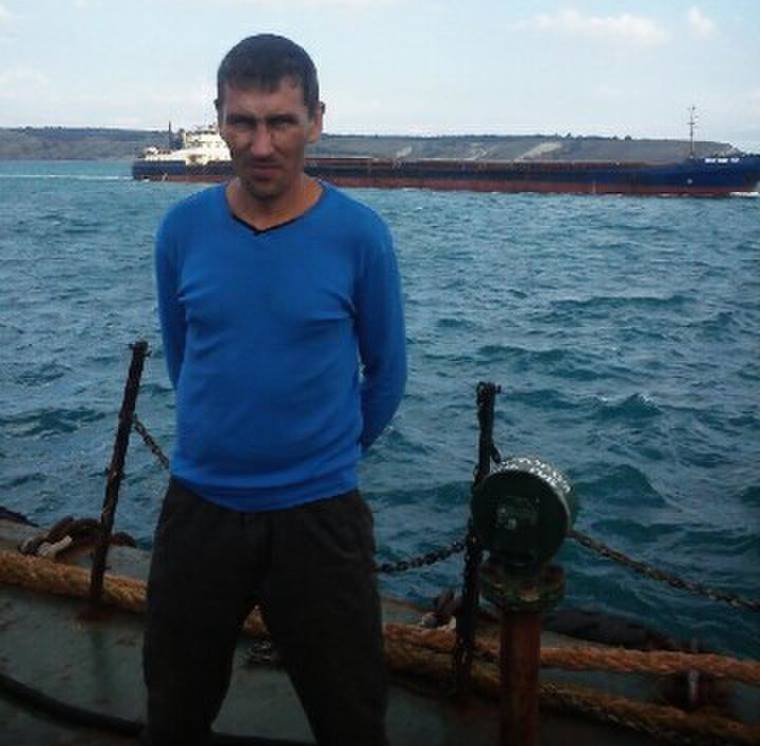 A simple worker from the Urals, a resident of Zlatoust, Vyacheslav Abdullin [3] was about to walk almost 3,000 kilometers back home. On the way home he often cursed himself for having responded to the announcement of one of Yekaterinburg companies that promised a job in Chelyabinsk and Sverdlovsk Oblasts on a rotation basis. “30 days with accommodation and meals, and after that – 15 days rest at home” they had promised.

Only after signing all of the necessary documents did they reveal that there was no work in the Ural region. Therefore, Vyacheslav and other workers were offered to go to Crimea. They were loaded onto buses and taken to the coast of the Black Sea, were the construction of the Kerch Bridge was on. It turned out that no one had any intention of taking workers back home when their shift was over. As their foreman cited the lack of transport, Vyacheslav Abdullin along with his colleague decided to travel home on their own. As they were not paid for their work, the builders expected to reach the Urals by hitchhiking. However long-haul drivers did not want to take any hitchhikers, so they were forced to walk. 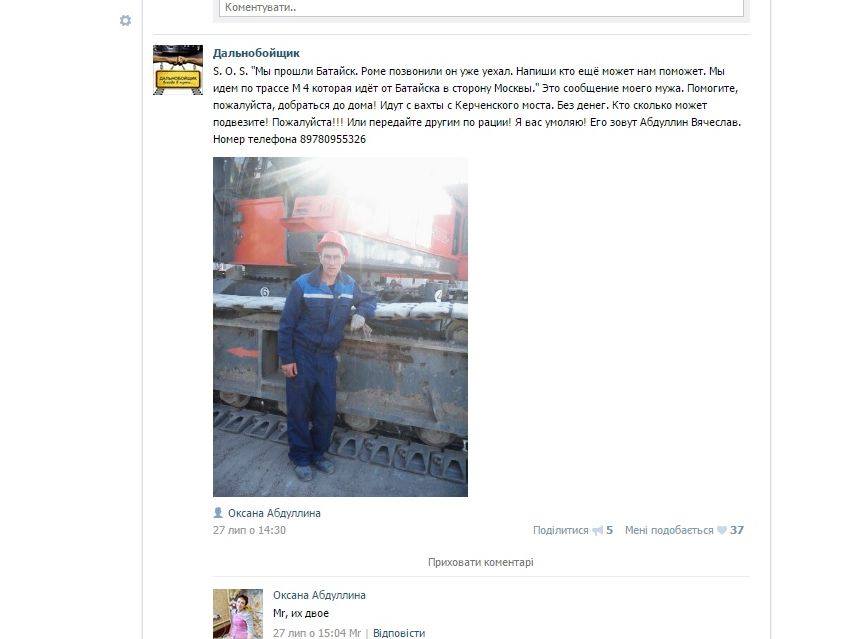 Vyacheslav’s wife Oksana placed an announcement on “Dalnoboyshik” web page and in VKontakte network with a plea for help for Vyacheslav to get home. According to her, by that time her husband had walked for 4 days, ate berries and wild fruits.

“We have passed Bataysk. His colleague Roma got a call and he has already left.  We are on the M4 highway to Moscow. Anyone who can please give him a ride! I beg you,” wrote Oksana on behalf of her husband on July 27 and gave his mobile phone number. But no one replied. Therefore she had to take a small loan to send money to her husband, which he spent on a train ticket. “We are out of money now”, she explained. “Our house burned down and we rent an apartment. My husband is a builder and he wanted to earn some money … “

That was not the only case when workers hired for the construction of the Kerch Bridge were ripped off. Recently, a video was posted on the Internet with a sad story of welders and assemblers living in a former children’s summer camp on 80 Ordzhonikidze Street, Kerch. They have not been paid for two months. Besides, during the hiring they were promised an hourly wage one and a half times higher than the one they were told they would get after the job was done.

“We have been working for 2 months on the bridge construction from the Crimean side. The company is called Business Resource LLC. They do not pay our wages. According to this contract we get 23.50 rubles per hour. But according to the contract we signed when we were recruited we were promissed to have 1,500 rubles per day for the 12-hour day with one hour break and no days off. We all came here from different places and according to the contract, we were to be provided with housing and food. We all found this job through an announcement at (bulletin board) Avito”, said a young builder from Voronezh.

The workers were promised two meals per day but not everyone got it. “They think we are too tired and don’t need our breakfast after an 11-hour shift. Look at the conditions we live in: there are only 2 toilets and one 110 liters boiler for 50 people,” added the worker.

According to the builders, they are in such a desperate situation that they are ready to take money for return tickets and go home. In fact, they don’t believe they’ll get their money.

Another colorful video about the construction of the Kerch Bridge was published earlier by a qualified welder (profanity warning):

Workers from other regions occupied by Russia are also invited to build the bridge.

Meanwhile, the Internet is full of job offers for construction of the Kerch Bridge. They also try to vamp people from the so-called DPR and LPR offering good salaries for “the construction of the century”. The scheme remains unchanged: the promised salary is about 45-55 thousand rubles per month. Note: The average income per capita in the IV quarter of 2015 in Russia was 35,586 rubles per month.

“Of course food and accommodations are at their own expense. Just from our city, 15 people went to the construction of the bridge and they all have returned. Nobody explained to the people that lodging and food are very expensive in Crimea, often, prices are higher than in Moscow,” a resident of Debaltsevo shared his experience. Residents of Khartsyzk, Avdiivka, Yasynuvata confirmed his words as they have already tried this way of earning money.

A shortage of workers on the construction of the bridge was solved in an old soviet way by sending there so-called student construction teams. The first units of this kind were formed of students from six leading specialized Russian universities: Moscow State Automobile and Road Technical University, St. Petersburg State Polytechnic University, Tyumen State Architecture and Construction University, and others.

The exemplary students were included in construction teams that were accommodated in the builders’ village near Taman. Another group was employed for construction of a road leading to the Kerch Bridge from Russia’s Krasnodar region.

According to Leonid Ryzhenkin, manager of the company Stroygazmontazh that is building a transport passage through the Kerch Strait, students perform “not complex and, of course, safe work on bridge construction sites”. The students were supposed to work until the end August. All student builders were promised a 5-day working week with an eight-hour working day, free accommodation and three meals per day. It seems like a good thing for students, but as we have seen, it did not work this way for everybody. 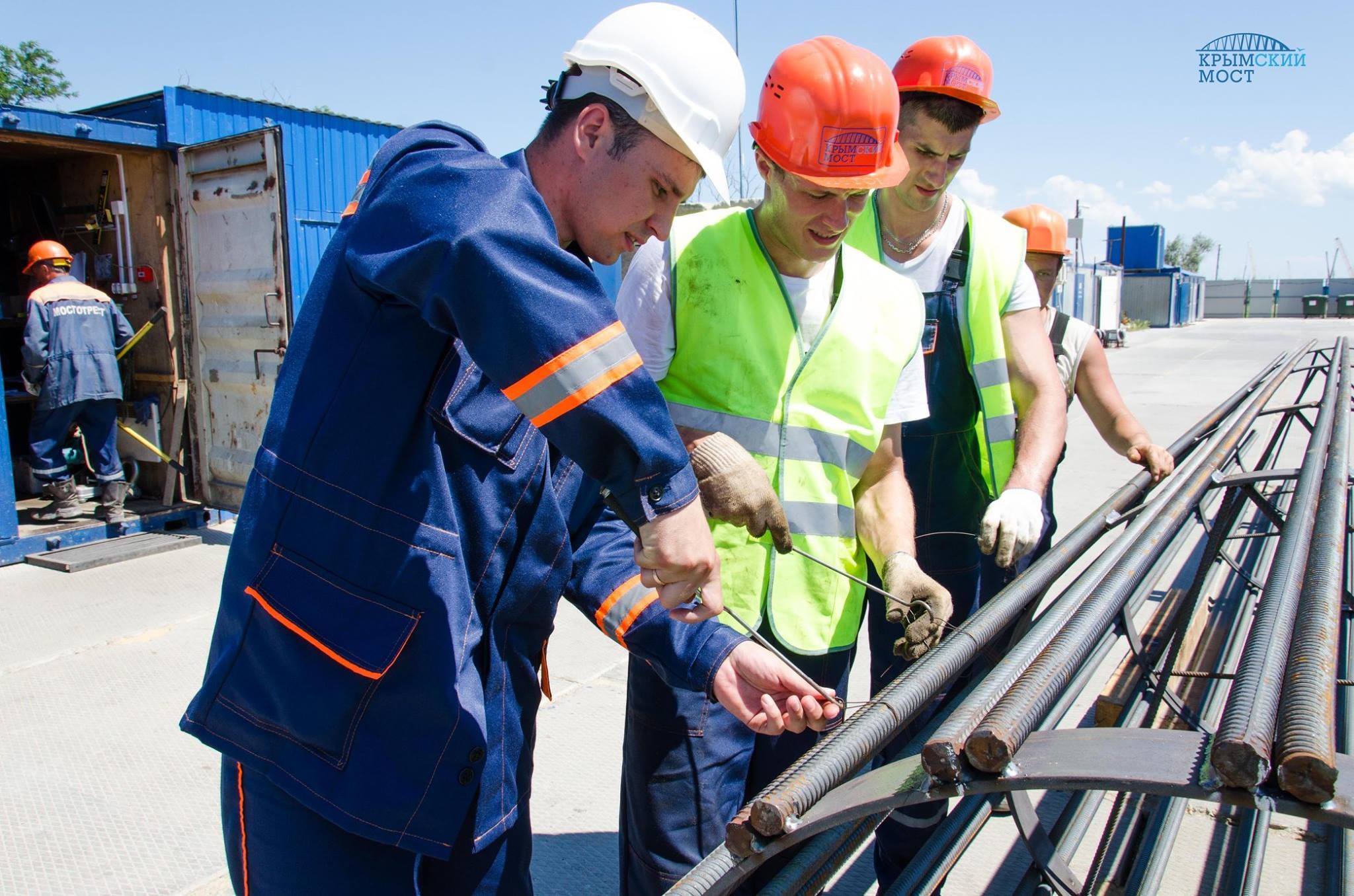 Russia has prepared thoroughly for “the construction of the century”. All the basic stages of construction are extensively covered by the Russian media.  Special accounts have been created and updated on behalf of “the Crimean Bridge” in social networks. “The Bridge” congratulates Russians with the Day of the Russian Navy, the World Day of whales and dolphins, and even Victory Day through these accounts. It also describes the process of pile driving and construction of fairway supports in detail.

The bridge is being built exclusively at the expense of the federal budget in the framework of the federal target program Social and Economic Development of the Republic of Crimea and Sevastopol through 2020. The estimated cost of the project is 211.9 billion rubles in prices of the fourth quarter of 2015. The occupying authorities promise the bridge will be opened for automobiles by December 2018 and for trains in 2019. The state contract for design and construction of the bridge across the Kerch Strait was signed by the Department of Federal Highways Taman of the Federal Road Agency of Russia and Stroygazmontazh OOO on February 17, 2015.

Many Russians approved the government’s decision to build the bridge at once. But they didn’t realize that its implementation would be at their own expense, during financial and economic crisis. For example, according to the Federal State Statistics Service, the number of poor people in Russia in 2015 rose sharply – by 3.1 million people, reaching 19.2 million people, which is the highest number since 2006. The poverty rate in Russia was 13.4% in 2015 vs 11.2% in 2014 (this is without data for annexed Crimea and Sevastopol).

Under these conditions the citizens of Russia were offered to finance an absolutely unprofitable project that would make them even poorer and most of them would get nothing in return. Since Crimea is and will be subsidized by Russia, there is no reasons to expect any return on investments in its infrastructure. The annexation of Crimea and receiving another subsidized region have accelerated the fall of the Russian economy and the living standards of ordinary Russians even without the pressure of international sanctions.

We should not forget that the construction takes place without the consent of Ukraine, which by itself is an outrageous violation of international legal norms, according to which the Azov Sea is an area of shared shipping. Even the former Kremlin’s protégé in Crimea Sergey Aksenov acknowledged that “it’s unlikely that Ukraine will give its consent,” adding that construction of the underpass would be cheaper and would not require any consent.

The lawyers and experts on maritime law that were interviewed, claimed that it is practically impossible to build a bridge without the consent of Ukraine. In accordance with the Treaty of 2003, the Vienna Convention on the Law of International Treaties must be applyed. This means that Russia has no right to violate these terms, using for example, provisions of Article 62 Fundamental change of circumstances, referring to the unilateral change of Crimea’s status.

The lawyers also pointed out that most countries do not recognize Russian jurisdiction over Crimea. The construction of the bridge may block the Kerch strait and will jeopardize the transit of Ukrainian ships. In turn, Ukraine will have the potential to challenge “fundamental change” in international court. As practice shows, these kind of trials may last for decades.

Therefore, because of financial and legal obstacles, it’s quite possible that the construction of the bridge will never be finished. As always, it will be explained to the common Russians by blaming “the enemies”, and nobody will be stressing out about wasted billions of rubles.

70% of the budget funds allocated for construction and repair of bridges and roads throughout Russia are to be spent on the expensive and pointless Kerch Bridge project. There is no clear economic model behind this project. The only reason to fund it is to provide free travel to the Crimean peninsula with which Russia does not have a land connection. The general contractor Stroygazmontazh OOO, a company owned by Vladimir Putin’s friend Arkady Rotenberg, will get paid in full and even more than necessary for “the construction of the century”.

According to Newsweek,  http://www.newsweek.com/why-putin-building-bridge-nowhere-474297 “in Russia, white elephants have special purpose and meaning. They are the tools with which the Kremlin can make things happen while keeping the top-level contractors, i.e. oligarchs and governors, in check.

“In all likelihood, this is the approach the Kremlin will continue to use in future, despite all talk of reform. Large, state-sponsored projects are part of the controlled environment the Kremlin believes is necessary to make change in Russia evolutionarily, not revolutionarily. Creating a sound, but less controlled investment environment is thus seen as dangerous for regime security.”

[4](CC BY) Information specially prepared for InformNapalm.org [5] site, an active link to the authors and our project is obligatory for any reprint or further use of the material.