After fierce fighting with a Russian diversion reconnaissance group (DRG)  in the vicinity of the town of Shchastya on Saturday April 16, 2015,  two Russian soldiers were captured – a captain and a sergeant – both of the Spetsnaz GRU unit from Tolyatti, Samara Oblast, Russia. Both were wounded, although severity of their wounds is unknown at this time. The total loss of Russian attackers is also to be determined. Three Ukrainians soldiers were killed and three wounded in the battle. Ukrainian military units that participated in the battle were troops from the 92 Brigade, 8th Regiment and Aidar Battalion.

The Coordinator of the InformNapalm team Roman Burko reported about this event on his Facebook page: “Insiders report that today, during a fight with the militant DRG at Shchastya, two Russian Spetsnaz troops were captured by Ukrainian forces…” (posted on Saturday, May 16, 2015 [1]) and later: “The guys from the frontline reported that by 5:00 am, the fight with the enemy’s DRG at Shchastya was over. The report about the captured Russian servicemen has been confirmed…” (posted on Sunday, May 17, 2015 [2]).

Today, May 17, the Anti-terrorist Operation Headquarters, through its spokesman colonel Andriy Lysenko, confirmed the report about the captured Russian servicemen at a press briefing while responding to a question about the accuracy of information on the capturing of the two soldiers of the Russian Main Intelligence Directorate (GRU).

Let us remind you that back in 2014, there were numerous reports in the media that a separate brigade of Spetsnaz GRU was sent from Tolyatti to Crimea to protect a site of strategic importance. In March of 2015, there was a report [3] that this unit, was transferred to Luhansk Oblast .

A doctor named Grigory Maximets has also confirmed the information about two wounded Russian servicemen on his Facebook page and posted photographs of their treatment in the medical centre: “Yesterday, May 16,  Russian Spetsnaz attacked the Ukrainian town of Shchastya from occupied Luhansk. Based on the words of the two wounded Russian soldiers that were brought to the medical unit (of the Aidar battalion and the 59th hospital) they were confused by their commanders telling them that the Aidar battalion had left Shchastya and they were sent to confirm this…)

Interestingly, the day after the capture of the two Russian soldiers, the LNR posted pictures of identity cards of the two prisoners on social networks, purporting to show that the Russian soldiers were LNR troops, and not Russian military.

This is a photo of the ID supposedly issued by the LNR to Alexander Alatolievich Alexandrov, sergeant of contract service of the Russian armed forces from the town of Yuzhno-Sakhalinsk, date of birth January 7, 1987, call sign ‘Alex’. 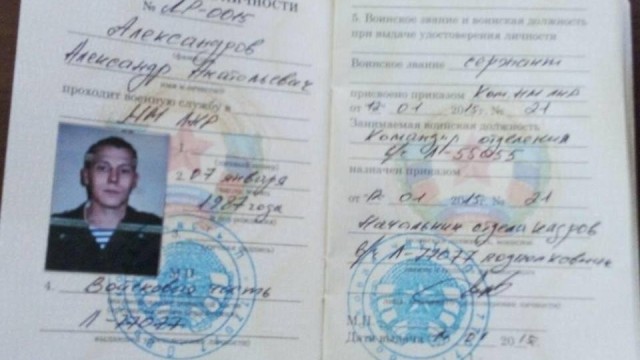 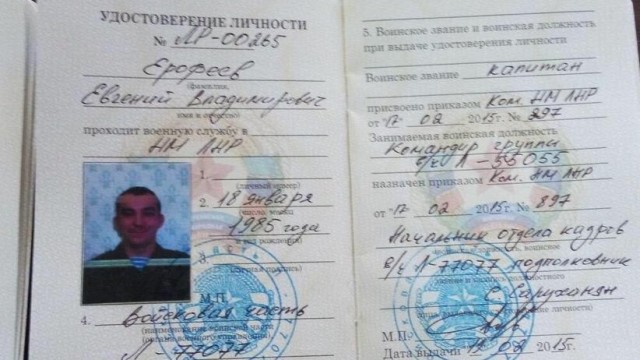 The InformNapalm publishes this material, even the graphic photographs, in order to prevent any attempt by individuals to hide or deny the evidence of the Russian attack and capture of their troops.