Dzianis Ivashyn [1], a well-known Belarusian journalist and editor of the Belarusian version of the InformNapalm international volunteer community website, sent the first letter in a month from the prison where he has been held since March 12, 2021.

It is known that the term of detention for the journalist was once again extended until September 12. Overall, Dzianis Ivashyn has been in Hrodna prison for four months now. The formal reason for the detention was his OSINT investigation into former servicemen of the Berkut special police unit disbanded in Ukraine, who fled to Belarus and were in service of dictator Lukashenko.

There were no messages from Dzianis Ivashyn for more than a month. Finally he managed to send a letter from the prison. Excerpts from his letter were published on July 8 by Radio Svoboda [2]. 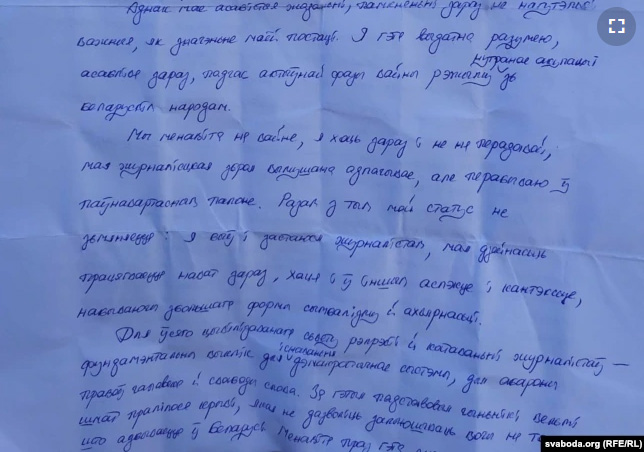 “Do not doubt for a moment in my sacrifice and continuation of sincere service to our Motherland, Belarus. As I was, I remain a patriot, devoted to the Motherland… However, my personal desires and aspirations are not so important now… I understand this perfectly, especially now, during the active phase of the regime’s war and internal occupation. We are at war, although I am not at the forefront now, my journalistic weapon is forced to rest, but I am in complete captivity.

However, my status does not change: I was and remain a journalist, my activity continues today, although in a different aspect and context, acquiring certain forms of symbolism and sacrifice. For the entire civilized world, the repression and torture of journalists is a major challenge to the existence of a democratic system, to the protection of human rights and freedom of speech. A lot of blood has been shed for this, which will not allow us to turn a blind eye to what is happening in Belarus. It is due to this that the value of my figure increases many times over.

Because of this, we must be ready for everything… Now the main thing is our Belarus, its democratic transformation. With God’s help it will happen, we hope, in the near future… We must be united and support each other. We must live and move on, clenching our teeth. With ardent faith in the heart, a clear and enlightened mind, a sincere calling and sacrifice.”

Worth to recall that Belarusian law enforcement officials use not only physical but also psychological pressure [3] on political prisoners of the Lukashenko regime.

At the end of June, Dzianis Ivashyn began having problems with his heart in prison. It is also known that prison staff in the presence of some unknown persons constantly demand that the journalist write a “confession”. Dzianis Ivashyn insists that he did not commit any crimes, so he does not sign any papers or false statements.

InformNapalm [16] does not receive any financial support from any country’s government or large donors. InformNapalm.org website is supported solely by the community volunteers and our readers. You can also volunteer or support the development of the unique volunteer intelligence resource InformNapalm with your donations through Patreon [17].