Belarusian company is behind the online casino AZINO777 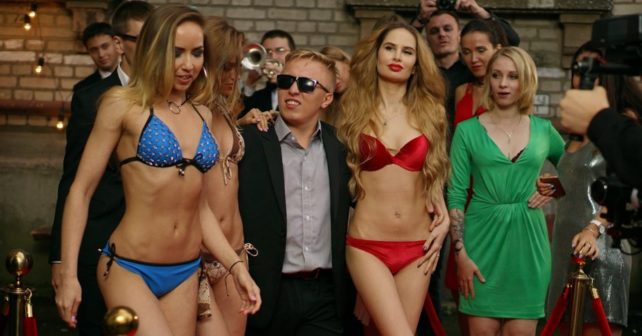 The reason for this study was an attempt to figure out who really controls the lion’s share of the huge income from the so-called “online casinos”, and to which real beneficiaries this business belongs to.

You have probably noticed that they such games are promoted by Russian celebrities. So what drives a fairly large number of celebrities to advertise a completely illegal business both in Russia and in Ukraine? Of course, it is money, a lot of money in the form of their fees.

In general, gambling on the Internet causes a very ambiguous reaction from ordinary users. Some are convinced that this is the most ordinary scam, which must be strictly prohibited. Others believe that on-line casinos have the right to exist, but this is a matter of legalization and state regulation.

In Ukraine, this issue has been pushed aside for many years and the state is trying to make gambling sites less accessible, but this, as practice shows, does not help. Online casino operators are looking for a backdoor for their work.  The evidence of this is the free access to sites like Azino777, and moreover, dozens of opportunities for players to replenish their accounts and withdraw gambling money. In addition, we should not forget about the basic means of anonymity on the Internet, known as a variety of VPN services.

By the way, these casinos are millions passing by the state treasury. The demand generates the supply, and as long as people are willing to waste their money on slot machines, there will always be companies that offer such opportunity.

For my research I chose the company about which I could find the most information in the open sources and which is the most active in its advertising. And to be honest, this is the company I am most fed up with as a user of free movie-watching services online.

A number of media outlets like RBC and The Bell reported that the Ukrainian National Police Investigation Department suspected the Ukrainian company Royal Game of creating an Azino777 online casino. The Royal Game belongs to the resident of the Russian Federation Albert Valiakhmetov. Several Ukrainian citizens whose names are unknown are also mentioned. The Bell suggested that Sergei Tokarev and Rustam Hilfanov might be among them. And they referred to an investigation that was published on RBC. https://thebell.io/azino777/      https://www.rbc.ru/magazine/2018/07/5b3f96df9a79475e9f9f5045

But later on the Russian edition denied this information:
“Earlier, media named two Russians involved in Azino777 – owners of the IT company Lucky Labs, Sergey Tokarev and Rustam Gilfanov. They do not appear in the documents of the Ukrainian court. Accroding Security Service of Ukraine, the men were searched on suspicion of organizing gambling, but the investigation found no evidence and the case was closed,” wrote Kommersant.

Who did Kommersant find? This publication revealed the real people involved in the “777” case in Ukraine and those who might be associated with Azino777. These are Ukrainians itizens Oleksandr Plakhtiy and Oksana Aliyeva. Documents published by Kommersant show that in Ukraine these names are on the list of people suspected of organizing an illegal casino.

But from our point of view, the investigation was incomplete.

According to the United State Register of Legal Entities, Individual Entrepreneurs and Public Organizations of Ukraine, Iryna Brusyo is the head of PJSC «Softanza», registered in Kyiv, on Zvirynitskaya street, and is engaged in computer programming, information placement on web sites and other activity in the field of information technologies.  Since the Ukrainian IT environment is a big village, thanks to NoNameCon, I could ask people how much they heard something about PJSC “Softanza”. The response of more than 20 specialists in this field was very clear – we have not heard of it and generally do not know such company.

PJSC «Softanza» is owned by Europe Investment Group UG, registered Schweinfurt, Germany. It is indicated the German Commercial Register that the company was established in 2013, and one of its managers is Vladimir Bolykov. The ultimate beneficiary of the “Softanza” is Alexander Shad, a resident of Dittelbrunn, Germany (see the United State Register of Legal Entities, Individual Entrepreneurs and Public Organizations of Ukraine https://usr.minjust.gov.ua/ua/freesearch and the German Commercial Register https://www.online-handelsregister.de/handelsregisterauszug/by/Schweinfurt/E/Europe+Investment+Group+UG+%28haftungsbeschr%C3%A4nkt%29/1188044)

The open registers of the courts of Ukraine reveal even more interesting documents showing that PJSC “Softanza” may really be involved in the creation and management of Azino777. On August 2, 2018, the Holosiyivsky District Court of Kyiv allowed to conduct a search within the framework of criminal proceeding No. 12018100000000306 dated March 26, 2018. And under “surprising coincidence of circumstances” this involves Albert Valiachmetov and Iryna Brusyo. 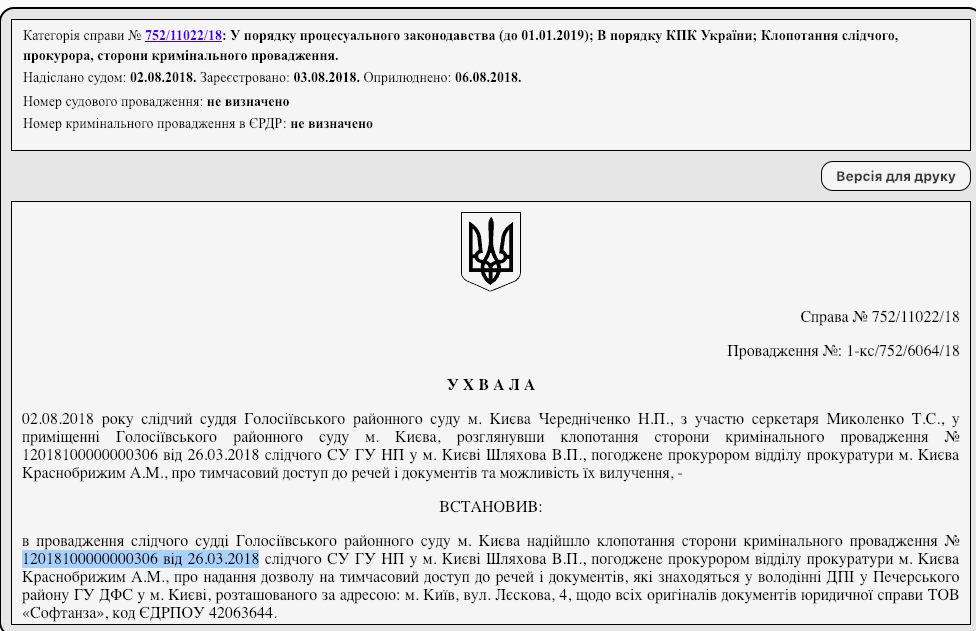 In general, the picture looks pretty casual. People engaged in illegal activities in Ukraine are being investigatied and Sergiy Demedyuk, the Head of the Cyber Police Department, actively works earning the taxpayers’ money.

But here is one thing.

The Russian channel RBC in its investigation about the owners of Azino777 presented advantageous facts of proof for the Russian reader. “The evil Ukrainians are robbing the poor Russians, but they have already been punished.” A 2018 publication stated that “the size of the Russian gray online casino market can reach € 1 billion.”

And such precise and real professional information was provided by someone called Ivan Montik, the head of the Belarusian company SoftSwiss, which creates software for online casino. Often media use very incompetent experts, so I was interested in this looking into this one. Moreover, in the whole investigation this was the only time this person and this company were mentioned. 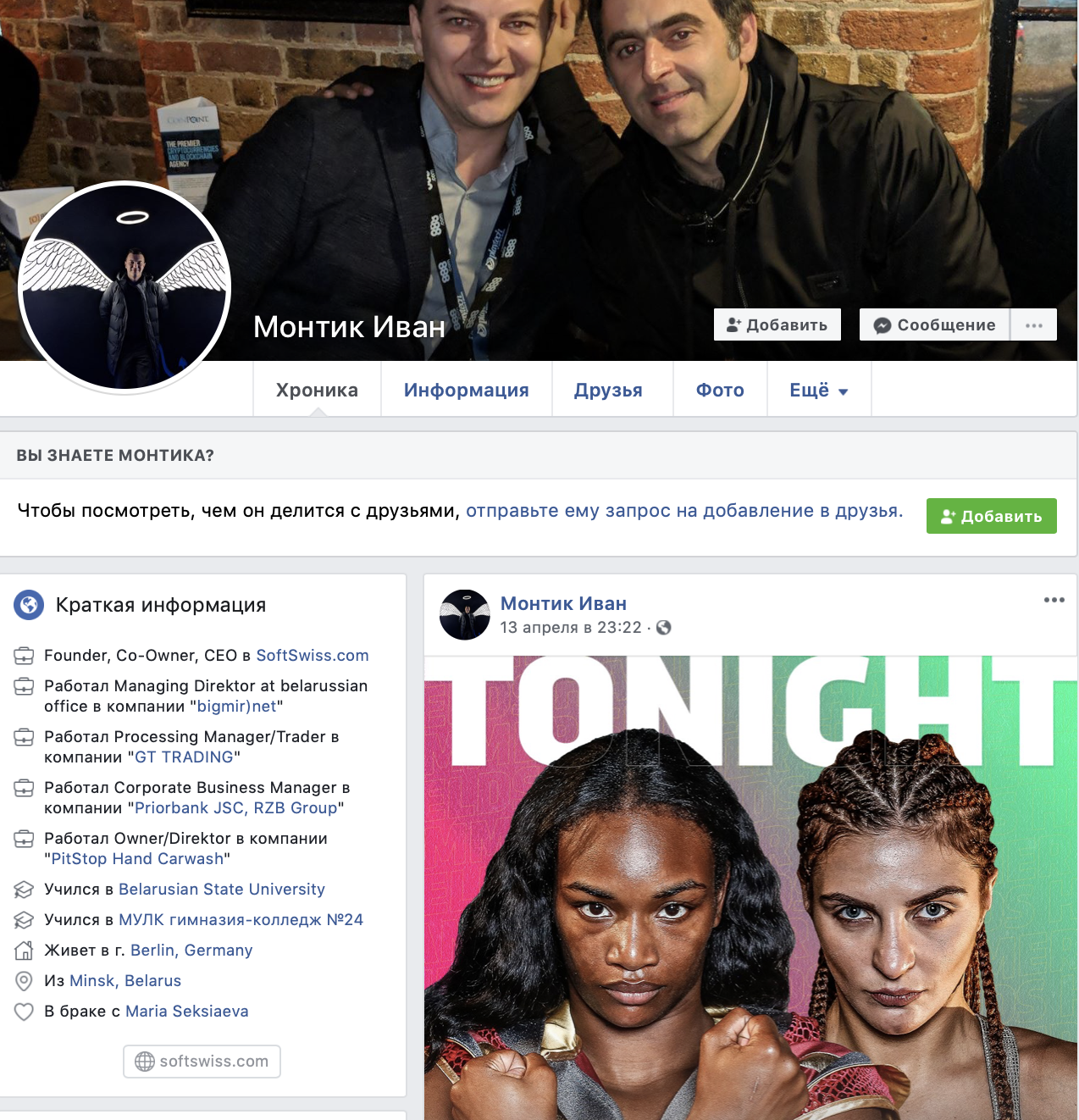 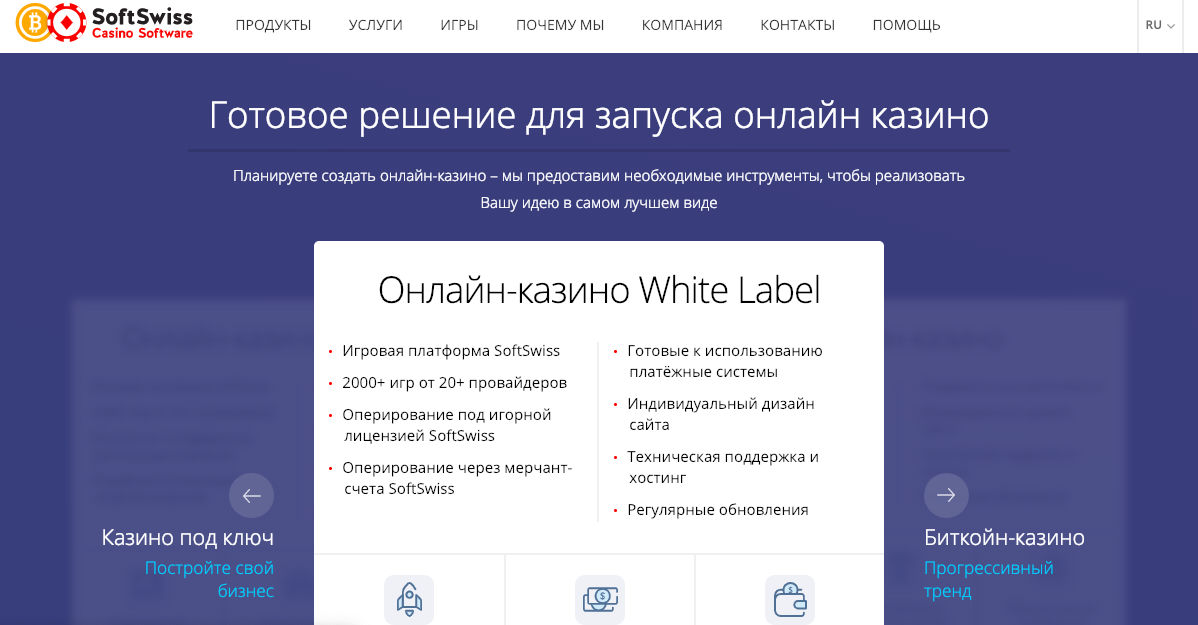 It was also surprising that the investigators of RBC did not find any more information, since neither Montic nor SoftSwiss had the largest online casino in the post-Soviet space. However, the Azino777 logs say something completely different. Games on the Azino777 site are downloaded directly from the SoftSwiss platform, which Mr. Montic could not have been unaware of.  Moreover, this project is not mentioned on the site of the company at all, but Ivan shared only the general information about the gambling business with RBC. 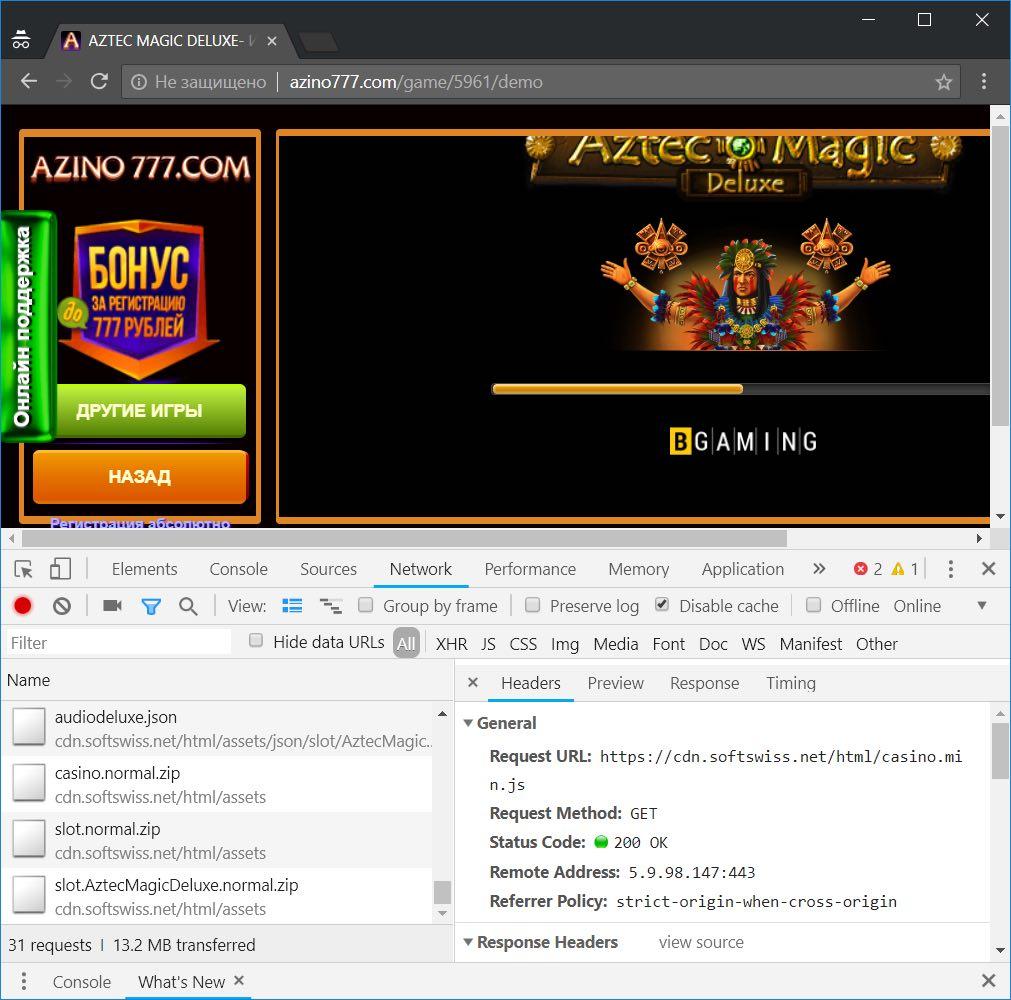 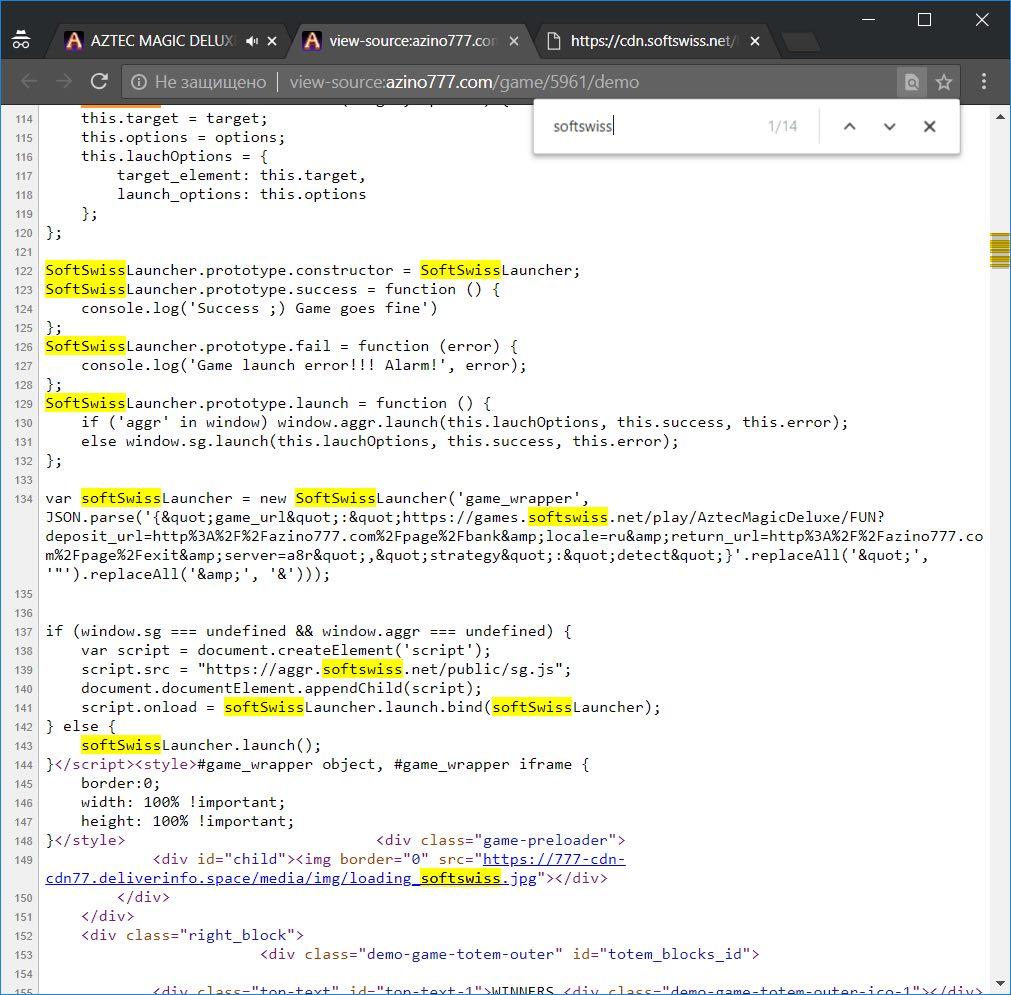 This is not surprising, as it has long been known that the IT industry of the Republic of Belarus is being controlled by the Operative Analytical Centre of the State Security Committee of the Republic of Belarus, which has repeatedly conducted a number of information and psychological operations against our state. And the use of the company controlled by it – is another touch on the image of the new enemies of the “Russian world”. But even on this example, as this article shows, they failed. Even though Russian editions, which speak about Ukrainians and Ukrainian companies, try to focus on not seeing those who are really involved in the work of the largest Russian casino.

Disclaimer: InformNapalm.org is not responsible for the publications posted in the subdomain of the blog. The materials in this section are not editable, they are author’s blog notes on various topics and do not relate to the specifics of the investigations of the InformNapalm community.

No Responses to “Belarusian company is behind the online casino AZINO777”