Masterstroke: How Russian citizen Babchenko and the Security Service of Ukraine fooled Kremlin 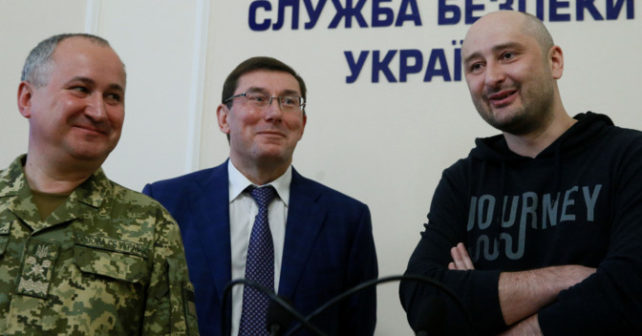 This is going to be a very personal text that was initially composed in German on 31 May 2018 for the European audience, but I believe that these emotions are common to many.

Arkady Babchenko is alive! The Russian journalist, whose murder not only topped the headlines in Ukraine, but also received significant coverage worldwide, suddenly appeared at a briefing of the Security Service of Ukraine, starting his speech with words of apology addressed to his wife. This development caused diametrically opposing responses. Still in shock and with tears on their faces, the Ukrainian segment of the internet burst into Homeric laughter. However, the Russians, who just that morning were complaining about the murders of Russian citizens in Ukraine and demanding an immediate investigation, suddenly lost their cool and began spray spitting, like the RT’s propagandist Margarita Simonyan.

But let’s step back and talk about it in proper order.

On Tuesday, just like probably hundreds of thousands of Russian-speaking women around the world, I could not fall asleep. Then on Wednesday, I spent half of the day sobbing since I decided to write an obituary and were going over all of my translations of Babchenko’s articles into German since 2014. Blinded by tears, I was compiling these materials into a single article when I received a message on Facebook: “Turn on the briefing! Now!”

I did not plan to watch the briefing live. What could they tell me? Blame the Kremlin? I didn’t need SBU to tell me that – after almost 300 murders of independent journalists in Russia, the Kremlin’s modus operandi should have become obvious to everybody. The Kremlin does not only kill – it performs executions, makes a show of them, sets examples for everybody to consider. The way they did it with Nemtsov, Politkovskaya, Sheremet… Were they going to say that they hadn’t caught the murderer yet, but were trying their best? No, I was definitely not ready to watch that briefing live; I needed some time to come to my senses.

Having received my Facebook friend’s message, I forced myself to turn on the TV and couldn’t believe my eyes – there he was, alive and slightly apologetic, but with this usual cheeky smile on his lips and in the corners of his eyes – it was BABCHENKO! You can get an idea of my reaction if you watch this clip showing the reactions of the editorial staff at the Crimean Tatar TV channel ATR, where Babchenko has been working since 2017 when he fled from Russia to Ukraine:

I wasn’t surprised for a second that the SBU had chosen Babchenko for this operation. Who else? Babchenko has always been daring, cynical, mercilessly honest, and ready for any adventure. I suddenly understood the previous day’s fierce debates on Facebook, where Ukrainian veterans were wondering about the absence of the final shot to the victim’s head and claiming that this was very untypical for the professional hitmen usually hired by Kremlin; they attributed that to an eventual neighbor who could have spooked the killer. Others were wondering, how Babchenko – a tall, strong, experienced man, who fought in the first Chechen war at the age of 18, then went through the second Chechen war, and has been covering countless conflicts as a war correspondent – how could he become a victim of this kind of attack at the doorstep of his own apartment? He was always on guard due to his previous experiences, he would have fought back! And what about this strange picture of him lying on the floor in the puddle of blood – didn’t they say he died in the ambulance on the way to the hospital?

However, all these voices were drowned by the public grief. Only in the afternoon, it became clear how right they were. Thank God for that!

The operation conducted by the SBU was so highly classified that even Babchenko’s closest friends like Ayder Muzhdabayev – a Crimean Tatar with Russian citizenship, who fled to Kyiv in early 2015 and has been managing the ATR Channel ever since – were posting opinions full of anger, grief, and despair on Facebook. Another friend of Babchenko, a popular blogger and Swedish citizen Valentin Gadenoff, rushed to the Swedish embassy to ask for a broad media coverage of this incident in Sweden – for this story not to be forgotten, swept under the carpet, to put maximum pressure on the world community… What these people were writing after Babchenko’s “resurrection” can be summarized in one short statement: “You dummy! I am so happy to see you, but I’m going to beat you up anyway!” Thousands of comments were supporting them: “Give him a slap on the head – he deserved it”. I had similar thoughts, it was a mix of happiness over seeing him and the desire to punch him for the twenty hours of hopeless mourning and tears.

But to be honest, this kind of drolleries are expected from Babchenko.

The bottom line of this story is as simple as it can get: Putin’s Russia does not forget anybody who it considers a “traitor”. The practice of targeted killings of dissident Russian exiles has existed since the Soviet times – think of Trotsky in Mexico to start with. In the recent past, Litvinenko, Skripal, Sheremet and Voronenkov fell victim to it. Two months ago, the SBU was informed about Babchenko’s planned murder. It received the information from the ATO veteran who had been contracted for the hit. The SBU decided to conduct a covert operation – probably, to obtain incontrovertible evidence of Russia’s consistent involvement in politically motivated murders of this kind. Babchenko was informed about the operation about a month ago. The SBU claims that around thirty political murders of Kremlin’s opponents were in the making in Ukraine and that numerous sleeper agents were uncovered. The entire process of preparation to the murder was recorded and documented.

Currently, we are witnessing heated debates in the Western media about the moral aspects of staging an assassination. Probably only the people whose lives have never been threatened can utter such opinions. Arkady Babchenko is not a journalist in the Western European definition of this profession, a “post-graduate hipster abusing the keyboard of his MacBook Air in a trendy coffee-shop with a cup of latte on the table”. Babchenko is a war correspondent, who has been expressing his pro-Ukrainian views since the very beginning: he witnessed Maidan with his own eyes and then as early as March 2014 was already writing about the Russian occupation of Crimea, followed by his month-long trip to the Donbas. In Moscow, he was constantly facing threats for his public position, his portraits were smeared with feces, some advised him to leave Russia “or something could happen” – but he just kept writing, stating that he was a patriot. Only in February 2017, after long-lasting urging by his friends and the threats of incarceration, he fled to Ukraine. Even then, many were terrified, voicing concerns about the “length of Moscow’s arms” and saying that Ukraine is not a safe place for anti-Kremlin Russians, and one has to flee to Israel or the U.S. to feel safe. He refused and decided to stay here with his people.

And this is why I wasn’t surprised in the least that he agreed to an operation like that. It made possible tracing the Kremlin’s involvement in the preparation of a political assassination. It is not an exaggeration to call it a brilliant example of cooperation between war journalists and secret services. And the reaction of Russian political and media functionaries speaks volumes – the SBU were called “worms” during the evening talk show on Russia’s state propaganda Channel One. One would expect Russians to express joy about the fact that Ukrainian secret services protected the life of a Russian citizen but waiting for that kind of reaction would be a waste of time. It seems that the Russian media had already prepared the scripts for reports about the chaos in Ukraine, where nobody could feel safe… And what did Ukraine do? They spoiled it all!

There was no murder. Ukraine can protect its residents. Honest Russians are on the Ukrainian side in this conflict. The SBU will inform the community about the instigators of the murder and the details of its preparation. What is known for the moment, is that we finally have evidential proof for Kremlin’s machinations on the territory of a sovereign state.

P.S. By the way, there was a similar case in the 1980’s in France: “Franco-Romanian precedent for Babchenko faux death“.

This publication was prepared by Irina Schlegel specially for InformNapalmDeutsch; translated by Volodymyr Chernenko; edited by Max Alginin.

No Responses to “Masterstroke: How Russian citizen Babchenko and the Security Service of Ukraine fooled Kremlin”