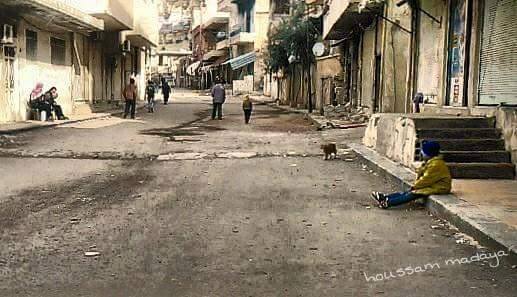 The volunteers of the international community InformNapalm, who are engaged in the evidence gathering of Kremlin regime crimes, are currently working on the Syrian issues by recording the facts of  bombings of the cities and buildings, schools, infrastructure  destructions by the Russian air forces; publishing the personal details of the “top” pilots who take part in these crimes.

Along with that, there is an issue of humanitarian crisis that affects civilians in this unfortunate country. By learning the data, one can conclude that the situations in Syria can be termed as “genocide”.

Genocide is the intent to systematically eliminate a racial, ethnic, religious, cultural or national groups due to political, race, national, ethical or religious  motives.

Syrian war is based on mythical contradictions between religious and social groups, purposely faked by the officials.

Zabadani- is a Syrian town on the border with Lebanon that was completely destroyed by Assad’s military forces. The residents were resettled to another township Madhaya, higher in the mountains. The village  is surrounded, the territory is mined, the sharpshooters shoot to kill, the people are starving.

Another person has died today, trying to bring some food for his family. A mine detonated. Yesterday another man tried to get some water from the well spring, was shot to death by a sharpshooter. These people are from Madhaya. The day before yesterday an elderly man from Zabadani died of hunger.  Today 140 persons fainted of hunger.

The interpretation of a report from Madhaya.

The children cry : “We are starving!”

Civilians in the village Madhaya are starving. The village is a big prison, where no one can enter or leave. Any attempt of escape is death.

A man cries: “Our children are dying of hunger.”

180 day of isolation and hunger despite of the fact that a ceasefire agreement and the captives swap agreement with the Shi’ahs of Khfaria and Fua were signed.

Nevertheless, another technique of killing the locals is going on, it is a real genocide.

The population is impoverished completely during these 6 months. The people have suffered a lot. Since then dozens of children died. 15 people were blown up by land mines that surround the village.   Anyone who tries to bring food to Madhaya risks his life and as a rule gets killed.

A woman is asked: “How many days haven’t you eaten at all yet?

She answers: “We have no food for already 2 days. Here is my son standing over there, he has not eaten for several days. We beg the world to hear what is going on in Madhaya. It is a real humanitarian disaster.”

Form the 1 of July, Assd’s army and Hezbollah  laid siege and torment  the civilians of Madhaya and Zabadani

No Responses to “Syria: genocide”