The Anti-Terrorist Operation in Ukraine: Summary for August 14, 2014 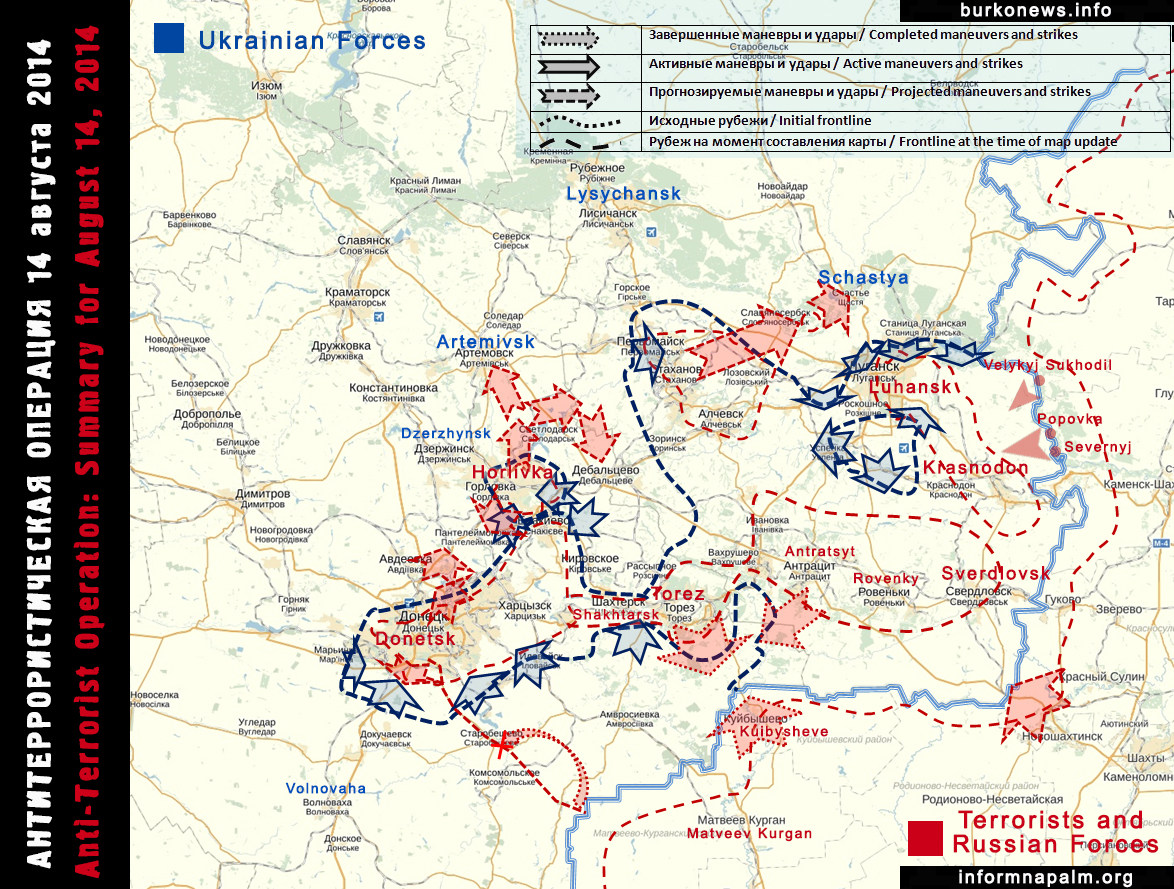 The past day was marked not only by a number of wins but by losses of previously liberated territories. The dynamics of events changes very quickly and we cannot redraw the map every minute or every hour; moreover, that even does not make sense if settlements change hands very often. That is why if we do not change the borders on the map and only show directions of attacks, this means it makes sense. If the situation does not change drastically, the map of the territories controlled by terrorists may start to grow tomorrow. For now we do not make any significant changes to the borders.

We have to admit that the terrorist managed to regain control over Marynivka village (Donetsk region). This scenario was predicted in our previous summaries: we showed directions of possible attacks from Antratsyt and Kutbyshevo. Of course, the militants would be unable to complete their maneuvers and attacks successfully if the Russian Federation did not help them. This can lead to complete encirclement of the forces in Miusynsk. Given that Fashchivka is no longer controlled by the ATO forces, the consequences could be disastrous.

Our group also predicts the beginning of the active actions by terrorists in the area of Uspenka, Vasylivka and Kumachove. It is most likely that the militants are preparing a corridor to Donetsk; the possible direction is Donetsk – Starobesheve – Kumachove – Berestove. By the way, there is a good road connecting Berestove with the Russian Federation. This can be evidenced with a “flickering” DPR checkpoint in Hlynka village (Donetsk region) and the attack with MLRS BM-21 “Grad” from the direction of Berestove on one of the ATO groups located near Starobesheve. It is not clear yet for what purposed the corridor is going to be used: for withdrawal or for reinforcements.

According to the preliminary information the ATO forces have captured Olkhovatka (Donetsk region); this brought them close to the thruway between Horlivka and Donetsk via Yenakijevo. However, it seems like the militants expected the Ukrainian forces from the east because they delivered preceding artillery blows towards Panteleimonivka.

As for Horlivka itself, there were fights in the south of the city in the area of Ozeryanivka village. Moreover, in the evening we received information that the ATO artillery successfully hit the new headquarters of the terrorist in the area of Horlivka. Recall that the old headquarters located in the building of the Department for Combat Organized Crime was destroyed earlier.

After the unsuccessful attack on Ilovaisk the ATO forces had to withdraw to regroup and then closer to the evening began to develop the offensive on Mospyne, The terrorists continue to shell Mospyne, toughen the restrictions for the curfew and chase spotters. It is possible that they will try to counter-attack on Panteleimonivka via Popasna; Panteleimonvika will then also be attacked from Horlivka. The possibility of the attack is very high; yesterday the terrorists in Donetsk got reinforcements totaling up to one tank company. Besides, they may attack towards Starobesheve to consolidate progress achieved with multiple rocket launchers.

The terrorists continue to counter-attack towards Popasna. Today such an attack was successfully suppressed with tank fire of the ATO forces. The fire caused significant losses among the terrorists. It is safe to say that the ATO forces are getting closer and closer to Pervomaisk.

It is most likely that all attacks by the terrorists towards Popasna are none other than an attempt to regain control over the town with subsequent access to Debaltseve.

It should also be noted that there is no interaction between the gangs of the terrorists – just like there is no interaction between various uniformed services of the ATO forces. This is the reason why they failed to agree on counter-offensive actions. Besides, the increased activity of the ATO forces to regain the control over the region makes terrorists break up their reserves in different directions.

The ATO forces reported that they had captured Novosvetlivka and entrenched there. The fights for Khryashchuvate still continue. The position of the ATO forces in that area is extremely unstable.

To summarize, for the past day the terrorists managed to expand the southern corridor; the ATO forces achieved success in the area of Horlivka, Donetsk and the Luhansk region. However, the probability of attacks on the directions predicted yesterday remains high.

It should be noted that there are many militants imitating civilians in the liberated cities. Those militants gather information about the actions of the Ukrainian uniformed services. For example, they watch the airfield in Luhansk, the activity of the militants is also observed in Slovyansk.

The question of humanitarian assistance to Ukrainian citizens living in Donbas has finally got off the ground. Over the past day the convoy of 70 trucks with Ukrainian humanitarian aid was sent from Kyiv, Kharkiv and Dnepropetrovsk to the Luhansk region. According to several sources the Russian convoy of “humanitarian Trojan horses” was observed in the border area near BCP Izvaryne. The convoy does not dare enter Ukraine but recall that the area near Izvaryne is controlled by the terrorists.

One Response to “The Anti-Terrorist Operation in Ukraine: Summary for August 14, 2014”