The Anti-Terrorist Operation in Ukraine: Summary for August 15, 2014 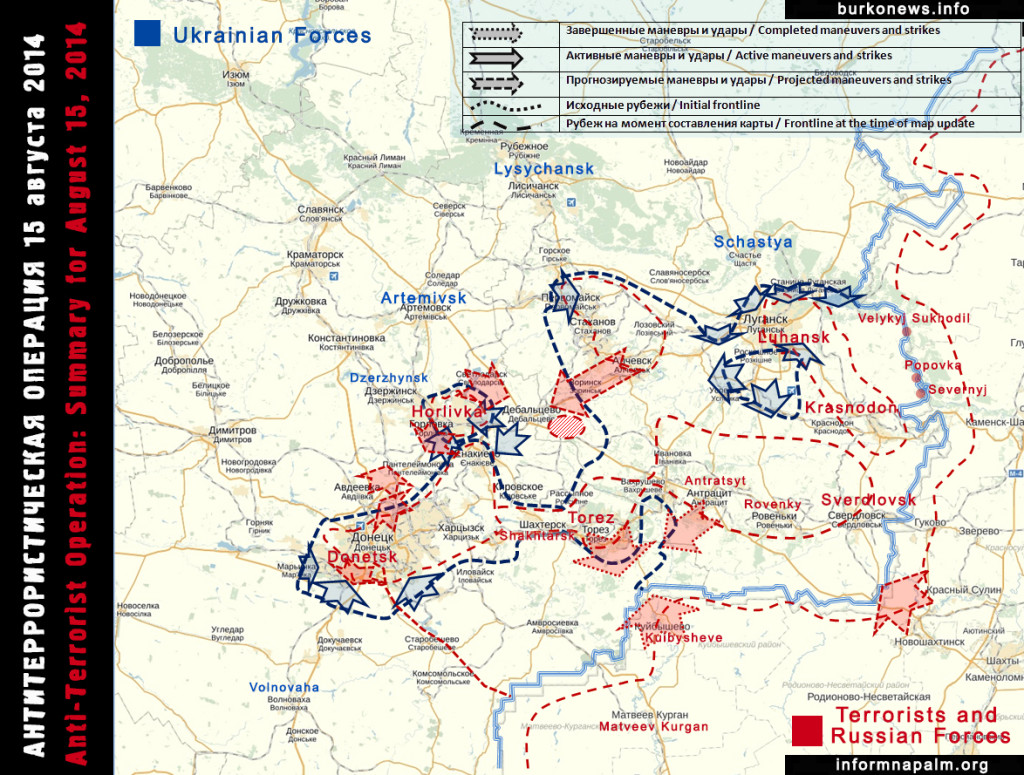 Everybody lies, terrorist “militia” lies about their recent successes, trying to tell the fairy tales about the creation of a full-fledged army, “the best in Europe”. The ATO representatives lie, concealing the shortcomings of the operation. If you take the information from social networks, only a small part of it is true. We try to evaluate information from different sources, setting aside personal emotions. Only this way, with your help, we will reach the truth.

After yesterday’s capture of Marynivka, rebel forces were able to organize a new siege in the area of Miusynsk and Krasnyi Luch. The group of the ATO forces advancing on Krasnyi Luch from the north-west, which in principle could solve this problem, was stopped by acts of sabotage in its rear. The ATO forces managed to liberate the villages of Fashchyvka and Horodyshche, but terrorist activity near the villages of Chornukhine and the settlement of Tsentralnyi, as well as a militant ambush in Maloivanivka, which led to the deaths of our comrades, did not allow to continue the offensive, at least for the past day, and the attempts to connect with the troops in Miusynsk have so far failed.

The offensive against the Stakhanov – Alchevsk group of terrorists from the southwest has also failed.

We do not share the opinion of “experts”, who are playing with their slogans, and in their analytical materials present militants as idiots, incapable of adequate tactical decisions. Unfounded optimism and obscene vocabulary are misplaced here. But to each his own, and the incident in Popasna yesterday, according to preliminary estimates, could be a diversion, allowing militants to regroup near Zorynsk and possibly relocate a part of their forces to Debaltseve. Note that for the last day communications were down in Debaltseve, and just before that militants were actively looking on some Zello channels for volunteers, who would be willing to provide information about the ATO forces in the area. Terrorists are assuring that this is the beginning of the operations by Stakhanov-based group of Mozgovoy. According to the “experts”, the last battle in Popasna was also its handiwork. For our part, we note that this area requires close attention from the forces of ATO, because there could be surprises.

As for Horlivka, the ATO forces managed to continue their offensive towards Yenakijevo, aiming to cut the communications between Horlivka and Donetsk. Bulavynske was liberated. But again, until the problem with the settlement of Tsentralnoe has been solved, this advancement could result in more troops being surrounded.

Note that thanks to good planning by the ATO forces, yesterday the militants in Yenakijeve suffered heavy losses. Terrorists secretly (as they thought) changed positions retreating to the eastern part of the town, and were very surprised when Ukrainian artillery worked very timely and accurately. This is one of the cases indicating that the ATO forces are capable of competent actions and are able to quickly solve the task of destroying the terrorists. They can fight very nicely when they want to.

But without too much euphoria, we note that only a part of Horlivka terrorists pulled out to Yenakijeve. In light of the latest event, the liberation of Yenakijeve could be delayed, but there is also some good news: the terrorists are not likely to bypass Debaltseve through Svitlodarsk or advance against Artemivsk from Horlivka, because the militants in this area have so little strength left. Still, for now we will not discount these options. In addition, there is the threat of militant breakthrough to Panteleimonivka from Yasynuvata.

Fighting continued over route H21 and Donetsk. Terrorist forces made ​​several counter-attacks toward Savur-Mohyla, through Manuilivka and Petrivske. We wonder: did the ATO forces listen to our advice to blow bridges to prevent free movement of terrorists in the former settlement? This is a rhetorical question. Recall that in the summary of the 7th of August, we stressed the need to demolish the bridges over the Horikhova river in the area of Manuilivka, which would cut off the militant reinforcement route from Snizhne, where the enemy had already accumulated a large number of armored vehicles. And the advice was also relayed by means other than these reports, so we can’t explain it by lack of information.

Moving on. The terrorists are beginning to feel very free in Miusynsk and Krasnyi Luch. Most likely, the successful strike in Marynivka relaxed them. Perhaps it’s for the best, since they have also become victims of the propaganda that underestimates the enemy, but on the opposite side.

The unsolved problem of route H21 allows the transfer of fresh forces to Donetsk, which somewhat complicates the ATO forces’ offensive on Mospyne. But we hope that the ATO command has foreseen this possibility, and is also accumulating its reserves. The shelling of Donetsk continued. And we can now say with certainty that it’s being done by both sides. As for the yesterday’s question regarding the possible passage through Starobesheve, it should be noted that this corridor is the shortest route from Donetsk to Russia, so it is the one most likely to be used. That is logical.

As for Novosvetlivka, Ukrainian forces managed to gain a foothold in the area. Moreover, the internal communications of Russian coordinators and the fighters show that the Ukrainian checkpoint created there is very troublesome. It is noted that KAMAZ trucks carrying weapons can not pass through the fields that are cut across with ravines, and when planning detours militants still have difficulty finding good options.

“There is a “but” on the road from Izvaryne to Luhansk. All roadblocks are controlled by the militia. Except one, namely the one in Novosvetlivka. Now we do not really understand how to route the convoy. They will either agree to take it through the Ukrainian checkpoint in Novosvetlivka, or try to find a way to bypass it, but that is extremely difficult to do”, said Eduard Limonov, former chairman of the banned in Russia National Bolshevik Party, the current chairman of the party and the coalition of the same name, The Other Russia, in his blog.

The recognition from the enemy side is always valuable in assessing the effectiveness of own actions. Therefore, the retention of the above areas by the ATO should be made a priority.

We all need to understand that in addition to the actual combat, there is also a virtual war conducted against us, the purpose of which is to spread panic among the general population. An example of such actions was the exaggerated message about “the defeat of Aidar” on the night of 15th of August. At that time some bloggers and volunteers reported outrageous casualty figures that had no connection to reality. As the result, while the patriots spent the night sending curses to some heads of the Ukrainian security, accusing them of being incapable of action, the terrorists diverted attention from other events, such as transfer of equipment from Russia, equipment relocation toward Zorynsk, etc. We repeat again: do not underestimate the enemy! And if fantastical-sounding information shows up somewhere, before making a decision about its inadequacy, think really well, because in every rumor there is only a fraction of a rumor. Try to take all the information without emotion, with the cool head, then it is easier to distinguish misinformation from the real facts and stop giving in to provocations on both sides of the conflict.

I want to finish the summary on a positive note. As it became known from the statements of the President, Ukrainian forces destroyed a concentrated group of Russian vehicles, which crossed the border and set up camp in the sector “D”. We were unable to learn the specific location of the destruction of enemy forces, but based on circumstantial evidence and the statements of some former military commanders we can make a preliminary conclusion that the vehicles were destroyed by the 9M79 missile fired from the tactical missile complex “Tochka-U” (NATO code name SS-21 Scarab B). As of 2013, Ukraine had 90 of these systems in its arsenal, so we still have ways to respond to an assault by the neighboring powers.

Our assumptions about the possible use of “Tochka-U” are also based on reports of local residents, who noticed the launch from the territory liberated by the Ukrainian security forces. For obvious reasons, we will not disclose information about the area from which we received the reports of the missile launch, especially since this data is circumstantial and unconfirmed, but we believe sharing what we know won’t hurt. We still need to dot all Us (“tochka” – Russian for “dot”). Believe in victory. Strength and patience to everyone.

One Response to “The Anti-Terrorist Operation in Ukraine: Summary for August 15, 2014”