The Anti-Terrorist Operation in Ukraine: Summary for August 19, 2014 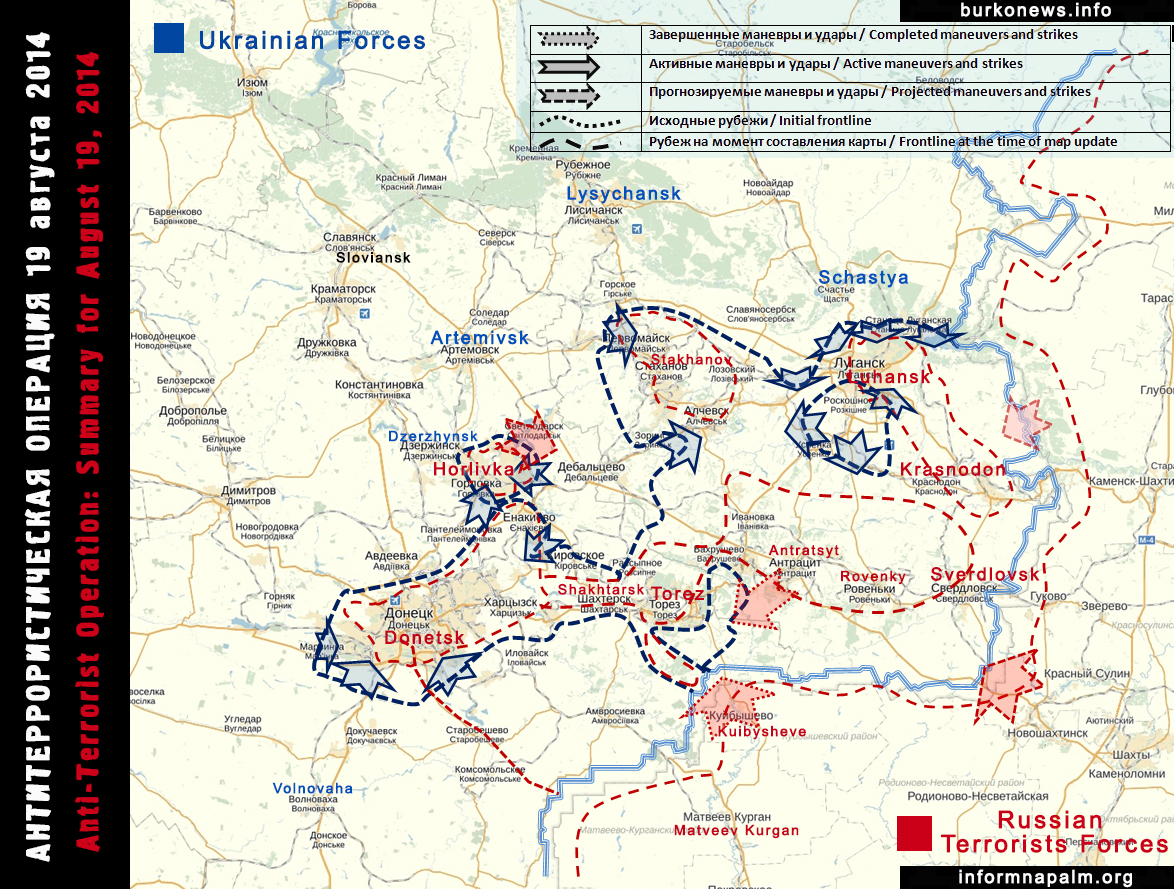 A Renewed Focus on the Luhansk Region

There is a lot of diverse information regarding Luhansk. Some rumors say that there is fighting in the central city area, while locals say that no one has seen Ukrainian forces in the city center so far. It looks like the military forces have entered the southern districts of town and try to establish themselves there. In the northbound direction the situation has not changed. Artillery duels in-between forces in Velyka and Mala Verhunka continue and the ATO forces entered but then left Luhanska village. South bound from Novosvitlivka, all the territory is controlled by the terrorists. We can also expect an attempt to unblock the M04 highway.

The information regarding a huge convoy of Russian vehicles that entered Luhansk is rather contradictory. According to the ATO commander in Luhansk area, Igor Voronchenko: 1200 people, possibly Russian army soldiers; 150 units of armored vehicles including tanks and MLRS BM-21 “Grad” entered Luhansk. According to sources close to “Aidar” battalion the information regarding the kilometer and a half long convoy of Russian vehicles which is presumed to have entered Luhansk on August 19, is a disinformation and is a part of the information war.
It is quite a difficult task to verify this information for such a significant convoy was not observed by our sources in Luhansk, and also the problems with mobile connection hinder more precise reconnaissance.

The difficulty with mobile connections is an alarming fact in the south-eastern direction from Luhansk. In particular in Molodohvardiisk and Krasnodon over the last days, there has appeared Russian mobile roaming connection. This is one reason why getting in touch with the border towns has become a problem. It is possible that the connection problems are related to the spread the activity of R-330ZH Zhitel jamming communication stations which are capable of jamming of GPS and GSM signals within 20-30 km from the operating station, RP-377LA Lorandit complex for radio detection, direction finding and jamming and RB-531B Infauna signal intelligence and jamming complex. Recall that projection of these stations to the Ukrainian border was noticed quite a while ago.

Having covered the issue of the “huge convoy”, we would like to pay attention to the passage of small groups of Russian vehicles entering Ukraine. Groups of vehicles of 15-20 units were recorded for quite a while, including the case a couple of days ago when a convoy passed through Sukhodilsk and a video of the convoy was put on the Web. It should be remembered that Russia is conducting a creeping aggression against Ukraine, and vehicle convoys constantly cross the border. That’s why we should raise not the issue regarding the convoy, which has a very definite answer and is not even discussed, but the issue of compete blocking the channels of supplying the troops and vehicle into Ukraine for terrorists. The presence of a large Russian military group along the whole borderline with Ukraine also forces us look back and outside the ATO zone for fear that in the event of a wider invasion the ATO zone may become a trap for the units engaged there.

Over the last 24 hours the activity of terrorist forces has to some extent decreased which can indicate both the exhaustion of their forces in certain directions and/or a preparation for a serious operation (for instance attempting to capture Debaltseve).

The H21 highway is still under the control of terrorist forces, however the armed forces of Ukraine are able to target fire in the area of Molodetsk and Velyka Shyshivka. Considering the constant clashes in the area of Savur-Mohyla, the advance towards Shakhtarsk, Torez and Snizhne has been suspended for now. Besides, the problem of the trap in the area of Manuilivka-Petrivske and Savur-Mohyla still needs to be resolved. Here we can expect the terrorists’ attempt to liquidate the besieged Ukrainian forces; the strikes are most likely from the side of Donetsky Kryazh and Stepanovka. However the terrorists lack forces, especially considering the significant ATO force grouping in the area of Velyka and Mala Shyshivka. Anyway the fact remains that H21 highway has not been blocked and is constantly used for the enemy’s motor convoys.

Over the past 24 hours Alchevsk gave a reason for some celebration. At one of the cathedrals the service turned into a meeting with the major request from ordinary civilians for the terrorists to leave town. Based on the observations of local people, there were not so many terrorists in town itself, however considering the complicated ground profile as well as the undulating topography their forces might just not manifest their presence so easily. So far we do not know the reaction to this request of those who call themselves “militants and defenders” but everything remained quiet in town as of the evening of the 19th August.

Pervomaisk is still under the militants’ control, they continue counterstriking in the direction of Popasna, while the ATO forces advance on the town from the North.

The ATO forces have not yet finished encircling the town, although the terrorists have pulled back from Ozeryanivka, which is village immediately to the west of Horlivka. This has most likely been done in order to get lost in the urban quarters where peaceful people can be used as a shield. The ATO forces continue advancing towards the town from the direction of Vuhlehirsk and Panteleimonivka, along with the attempts of isolating Horlivka from Donetsk, by attacking Zhdanivka. The problem of the terrorists’ Kirovsky fortifications remains unresolved.

On August 19 the terrorists in Horlivka received reinforcements. There is a chance that those are the terrorists from Yenakijeve who realized that they need to leave town, but it can also be a reserve for committing counter strikes.

Donetsk and the Surrounding Towns

The ATO forces have established themselves in Panteleimonivka, between Donetsk and Horlivka. Closer to Donestsk, Avdiivka and Yasynuvata are still controlled by terrorists (as of 19.08). Yesterday vehicles of terrorists were noticed moving from Yasynuvata towards Vasylivka, with a possibility of a counter-striking Panteleimonivka or towards Avdiivka, but this maneuver was stopped by the ATO artillery forces.

Within Donetsk itself the artillery duels between security forces and terrorists continue. Peaceful people are being killed because terrorists use them a cover. Some counter strikes are being prepared against the ATO forces. For instance today terrorists’ activity was observed in the direction of Marinka. So far it is not known whether they are preparing a counter strike or are waiting for the Ukrainian armed forces to attack from this direction.
The terrorists have pulled back part of their forces from the South. After “Donbas” and other battalions entered Ilovaisk, the militants pulled back some of their forces from Mospyne. However they continue shelling Ilovaisk from the side of Donetsk and Serdyte. Fighting continues in Ilovaisk.

From time to time armored vehicles from Shakhtarsk go to Donetsk and Khartsyzk. Also rather intensive activity was noticed in the direction of Starobeshevsk. Practically every day the Ukrainian Armed forces positions continue to be shelled in the area of Starobesheve and Amvrosiivka from the border line region. It can possibly be an attempt to pull back the ATO forces from Donetsk, or they may be trying to clear a corridor as we mentioned earlier.

Reflections on Security Concerns in Slovyansk

We have made enquiries regarding reports of guerilla activity around Slovyansk as previously reported. In terms of the incident reported around Karachun we really overreacted a little bit and it appears the fears of shelling were a misinterpretation of events. As for the fight nearby to Mayaky village, it unmistakably took place, the forest was on fire and even a helicopter was sent there. Concerning the terrorists we can say, without specifying their last names, that part of them have come back from Donetsk and are now in Slovyansk.

Today our source met one of the terrorists who was present at one of the barricades in the area of Krasnyi Most. The authorities have not responded to this information yet.

There are also cases of people disappearing and the security forces cannot explain what has happened. We can highlight a case where one of the gas stations has been shelled and a fuel station attendant disappeared.

As for the lack of control regarding commuter trains and insufficient control of cargo trucks leaving Slovyansk to Izyum, here we also presented entirely trustworthy information. Literally today one of our volunteers intentionally repeated an experiment with carrying a large black bag on a commuter train, where he could easily hide some weapons and ammunition. Nobody really cared to check the contents. Therefore the subject of the security of Slovyansk cannot be considered closed and the presence of the enemies raiding groups cannot be excluded. In this regard very strict control is required or at least elementary rules of checking the incoming/outgoing “cargo” in required.

Real Support for Ukraine from Russia

And on a positive note, while Russia is distracted by supplying terrorism into Ukraine and “rejoicing” the annexation of Crimea, some unknown people in Moscow repainted the star that tops the spire of the high riser on Kotelnicheskaya embankment into blue and yellow colors, along with flying the Ukrainian flag (you cannot believe it? – try googling the Russian news portals) So `Ukrainian guerillas’ are ready to ambush the enemy around every corner not only on our territory but also in the deep rear of the enemy.

Glory to Ukraine! Glory to its heroes! 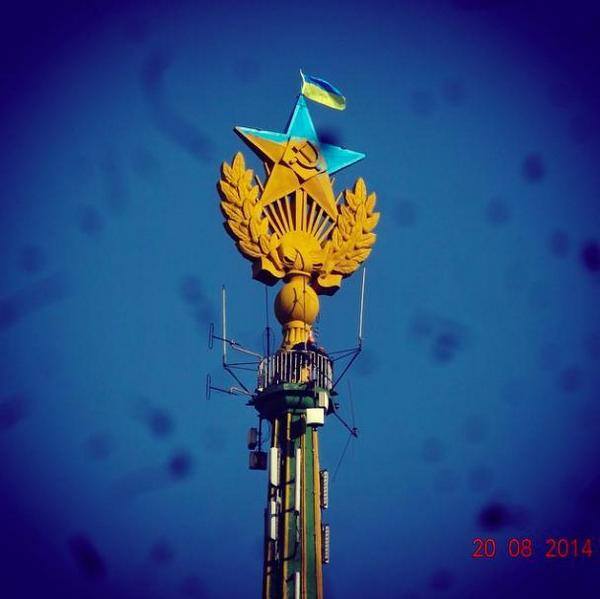 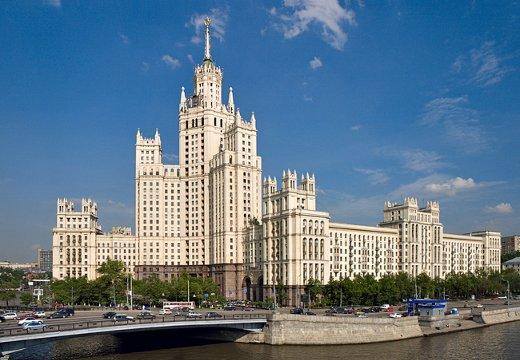 2 Responses to “The Anti-Terrorist Operation in Ukraine: Summary for August 19, 2014”