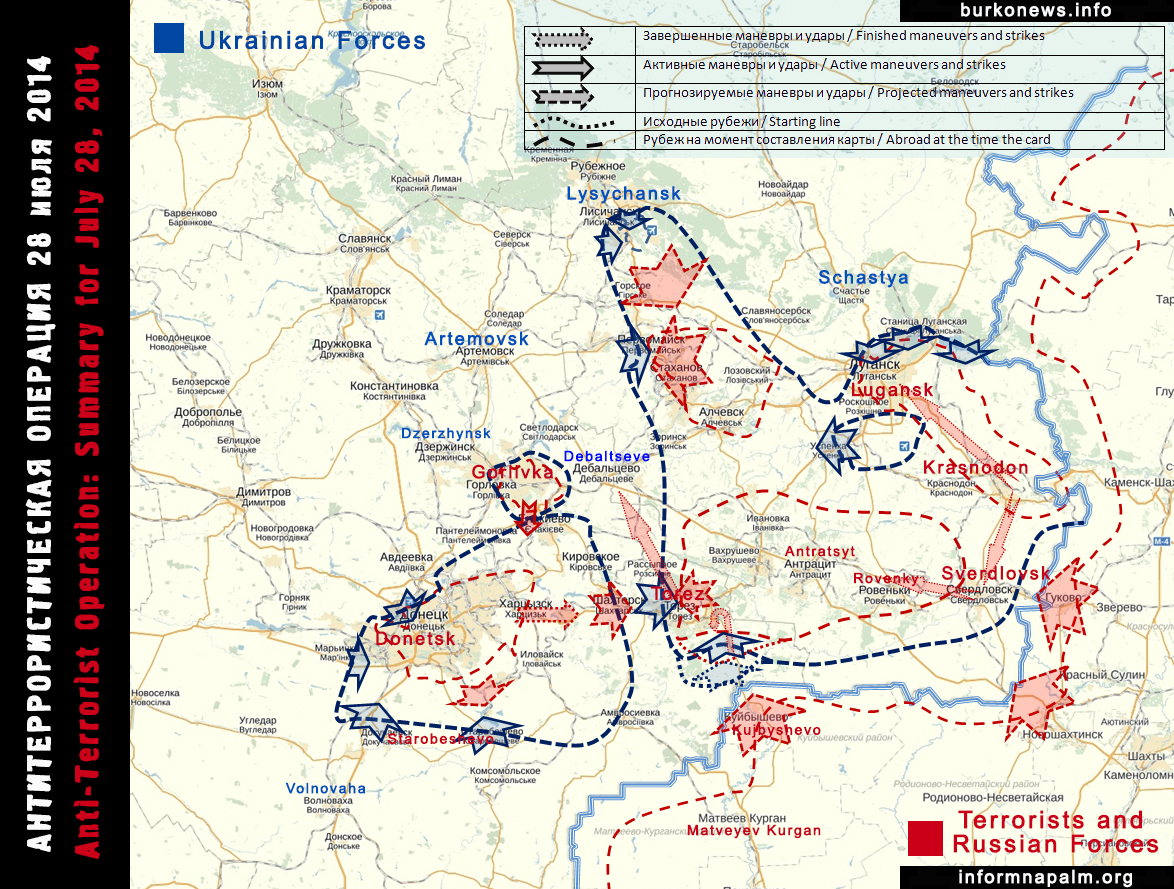 Last night pro-Russian terrorists fired at Debaltseve. Despite all shelling attempts militants were unable to fight the town back. The same is true for Popasna. There was a rumour about return of militants to Popasna. This misinformation was deliberately disseminated in separatist Zello channels and social networks. Besides, in the night there were unsuccessful attempts to attack Ukrainian forces in the area of Shakhtarsk.

In the morning of July, 28 the ATO forces continued their offensive in the directions we had specified in our previous summarieы.

Approximately at 12:00 the Ukrainian forces took over Savur-Mohyla (a hill of strategic importance near Snizhne). Intense combats continued till 17:00 with occasional shots heard afterwards in that area. The analysis of all ATO summaries shows that militants had accumulated up to one mechanized brigade in the vicinity of Savur-Mohyla. Additionally, the terrorists were constantly reinforced via Marynivaka and Dolzhanskyi border checkpoints and later from Sukhodilsk via Sverdlovsk and Rovenky. Given that this elevation allows for control over Marynivka, it can be considered that this should provide control over the border in this area.

The development of the offensive of the ATO forces was directed at Dmytrivka and then towards Snizhne where the survived militants had retreated. As of the evening of July, 28 the militants have been building up their forces in Snizhne aiming to attack Debaltseve, Torez and Shakhtarsk. Although there are ATO forces in Shakhtarsk, the mopping-up is still in progress and quite far from its completion given that militant convoys move from Makiivka and Donetsk towards Zuhres, as well as from Snizhne to Shakhtarsk and then towards Shakhtarsk.

In the evening there was information in militants channel about the assault of Marynivka, Chervonopartyzansk and Dolzhanskyi from the Russian side. On the one hand this makes sense as this would allow drawing off the forces engaged in the attack on Snizhne from the south; bit on the other hand such activity could pass off another direction, for example, Starobesheve. And it is very well possible that attacks on the above checkpoints will be performed by terrorists and not by professional soldiers from the Russian Federation.

The information on presence of military specialists from the Russian Federation (both in the border areas and actively fighting on the side of LPR and DPR militants) becomes widespread due to Ukrainian patriots who upload that information to the Internet. For example, according to the local residents, military registration and enlistment offices in several areas of the Russian Federation recruit people to take part in the war in Ukraine. Preference is given mostly to artillerymen and tankmen. The Russian Federation estimates the cost of lives of its own citizens between 100,000 and 250,000 RUB/month (approximately 2,850 to 7,000 USD) or in an early ticket in a refrigerator van.

Ukrainian uniformed services continue to advance upon Pervomaisk and Lysychansk; the expected retreat of the terrorists from Lysychansk has not happened yet. Besides, there is information that some of the militants in Luhansk moved towards Pervomaisk. As for Luhansk: another reinforcement of 7 tanks arrived to the city today. It is incomprehensible: according to the maps published by the official sources, Novosvitlivka and Khryashchuvate are marked as controlled by the ATO forces. If this is the case, the way the tanks arrived to Luhansk safe and sound remains a mystery. In addition, militants have been transferring their forces from the direction of Izvaryne via Kransodon to Luhansk for several days. On July 28 another convoy of 10 KAMAZes moved via Kransodon towards Luhansk from the Russian Federation. It should be noted that the ATO forces performed an air strike on the militant positions near Novosvitlivka and Novohannivka (Luhansk region).

The ATO forces continue to advance upon Avdiivka and tighten the encirclement around Horlivka. The breakthrough from Horlivka towards Donetsk began in the evening of July, 28; at that the terrorists had been shelling residential areas of the city since morning. The convoy of militants that had moved to Donetsk was intercepted in the area of Krsnyi Partyzan. At the time we prepared this summary and the map, battle actions in that area were still going on.

Besides, there was a rumour about possible blowing up of the reservoirs in “Styrol” enterprise. In the evening eyewitnesses confirmed they had seen smoke in that area. There is one last hope that all chemicals were taken out from the enterprise beforehand.

As for Donetsk, terrorists are preparing to assault the airport in response to the offensive upon Avdiivka and Marinka. Besides, we observed redisposition of the terrorist force in Donetsk itself. We are going to give more detailed coverage of the map of Donetsk in the next days.

The ATO forces started to advance upon Uspenka from the direction of Lutuhyne (Luhansk area). However, it is not all good news: the day was saddened by high casualty rates of the Aidar battalion. According to the press center of the battalion, 13 soldiers were killed and 10 wounded during the past day under Lutuhyne.

By the end of the day, despite the tragic moments, Ukrainian servicemen in general demonstrate well coordinated initiative of development of offensives. They are assisted by the civilians that live in the ATO zone. People are tired of being afraid of shelling and they are annoyed by treacherous actions of militants which constantly threaten their lives. The population actively assists ATO intelligence in gathering information and this positively affects the results of operations. Recently terrorists often do not expect attacks on the certain objects and directions assuming that no one reveals their positions. However, every day the number of informers and deserters increase as they see the successes of Ukrainian forces. Nobody wants to be among losers and outsiders.

One of the positive events of the day is that Ukrainian military in the course of successful operation were able to rescue the pilot of Su-27 aircraft from the territory occupied by the militants. The President of Ukraine, Petro Poroshenko, ordered to put forward the participants of the operation for a decoration.

It is important not to become overwhelmed by own success: in the border areas of Ukraine the locals many times reported about saboteur groups and disguised military servicemen. They were identified by their “high pitched A accent”, poise and “non-local type of faces”. In particular, special attention should be drawn to Kharkiv and Sumy areas. In these areas there is a possibility of breakthroughs and attempts to destabilize the situation in the near future.

Our forecast: given the accumulation of terrorist forces in the area of Zuhres and Torez, we can expect attempts of breaches towards Shakhtarsk from both directions. Militants can also attack Popasna and Horlivka to the north of Svitlodar to break the encirclement and unite both groupings. However, they will have to draw off some forces from Lysychansk for that. Besides, attacks from the direction of the Russian Federation on the above checkpoints are also possible, as well as a breach in the Starobesheve direction in order to provide supplies for the grouping in Donetsk.

There was information that tanks of the Armed Forces of the Russian Federation have gotten fully operational. The locals observed one of these tank groupings near Kantemirovka (Voronezh area).

In the international arena there are substantial advances in favor of Ukraine. On July 28 there were negotiations between the presidents of France, the USA and the heads of parliaments of the Great Britain, Italy and Germany. During the negotiations a question of tightening of the sanctions against the Russian Federation was discussed. As a result, the leaders of five states decided that it was necessary to take enforcement measures against Kremlin for peace enforcement and to stop Moscow to sponsor international terrorism.

Ukraine wages a full scale war against the terrorists in the east of the country. Probably no groupings of “militants and separatists” have ever had so many weapons, including heavy ones. The whole world now understands the cynical put-up job and hypocrisy of the Russian Federation (of Enslaved People) that initiated the bloody conflict in Ukraine. Moreover, the Russian Federation continues to sponsor the terrorists with weapons and military equipment. The terrorism to the scale of the entire post-USSR empire is a harbinger of new world wars unless the whole world takes appropriate measures before it is too late…

9 Responses to “Anti-Terrorist Operation in Ukraine: Summary for July 28, 2014”