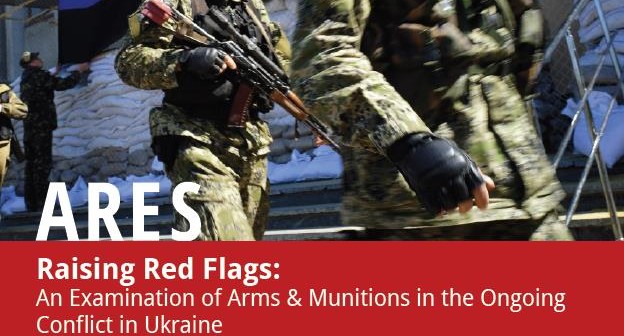 Armaments Research Services (ARES) has just released a very useful assessment of military weaponry being used in the war in Eastern Ukraine, in a report titled `Raising Red Flags: An examination of Arms and Munitions in the ongoing Conflict in Ukraine (Research Report No3, November 2014). This report provides a detailed review of the weaponry identified as being utilized by both the Ukrainian and the separatist forces, covering everything from munitions to types of personal armaments to heavy artillery and armoured vehicles.

In sifting through the detail of information, perhaps the most interesting part of the report is the recording of the range of weaponry in use that is not available to the Ukrainian military. This weaponry is almost exclusively found in the stockpiles of the Russian army. This data would therefore add to the body of evidence that the Russian military is supplying weapons to the battlegrounds of Eastern Ukraine.

However while the report’s focus is on detailing the range of weaponry available to the forces fighting in Ukraine, it also reflects a distinct political – pro-Russian – bias. Whether this is a deliberate bias or a result of incomplete research is another debate. However the report’s conclusions are severely deficient. We therefore conclude that while the report is a very valuable contribution to the knowledge base of the weapons being utilized in the war in Ukraine it is questionable in its analysis of the sources of supply and  therefore in its conclusions. And yet in the information field reader perceptions of analysis and conclusions are everything. 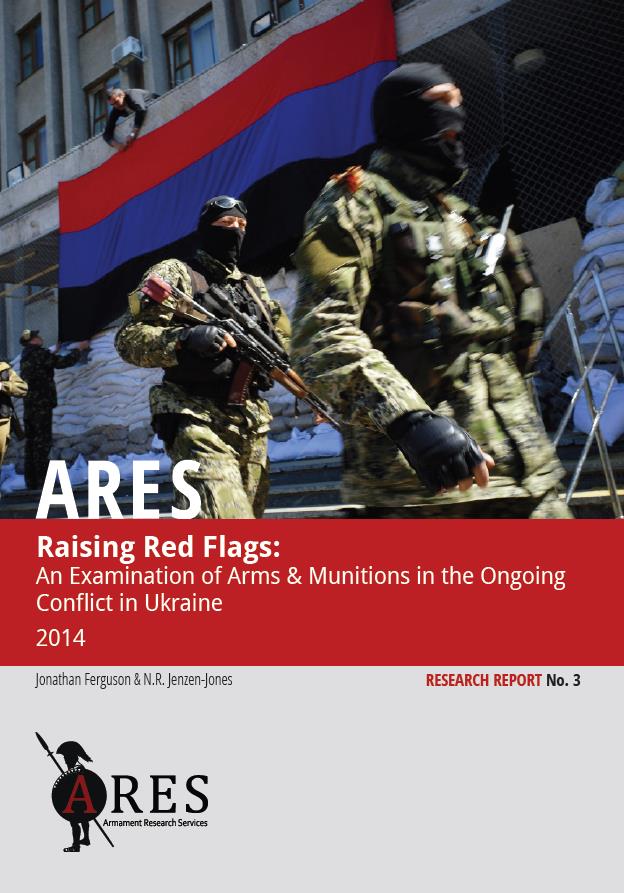 This article is not intended as a comprehensive review of the ARES report. It simply intends to firstly highlight the key information about weaponry identified by ARES that can only have been supplied by the Russian military (part 1), as this is extremely useful information. And secondly the article intends to respond to the apparent inability of the authors of the report to acknowledge direct Russian involvement in the conflict, despite all evidence (including their own and other well-known sources) to the contrary (part 2). These first and second components of this article are therefore integrally linked.

Unique and contemporary Russian army weaponry being utilized against Ukraine

Although it excludes the Russian military units operating in Ukraine from its analysis, the ARES report provides an interesting summary of weapons in use on each side, with pictures from the combat zone of some of the weapons. For the sections on artillery and armoured vehicles a summary table is broken into equipment used by the Ukrainian military versus equipment utilized by the separatist forces. The report then turns to documenting the `sources and mechanisms of supply’. It is here that the report highlights what it calls `Flag Items’. In other words weaponry found in the forces of the pro-Russian separatist which could not have been captured from the Ukrainian military, and therefore could only have been sourced from outside Ukraine. All but one of these `Flag Item’ weapons are Russian, and the vast majority are weapons largely unique to the Russian army.  The report highlights that many of these `Flag Item’ weapons have been produced for the exclusive use of the Russian military, with no or limited known cases of export being recorded. The `Flag Items’ include small arms, anti-aircraft missiles, anti-tank missiles, armoured personnel carriers, and main battle tanks.

The Flag items are summarized in two tables in the report which are reproduced below: 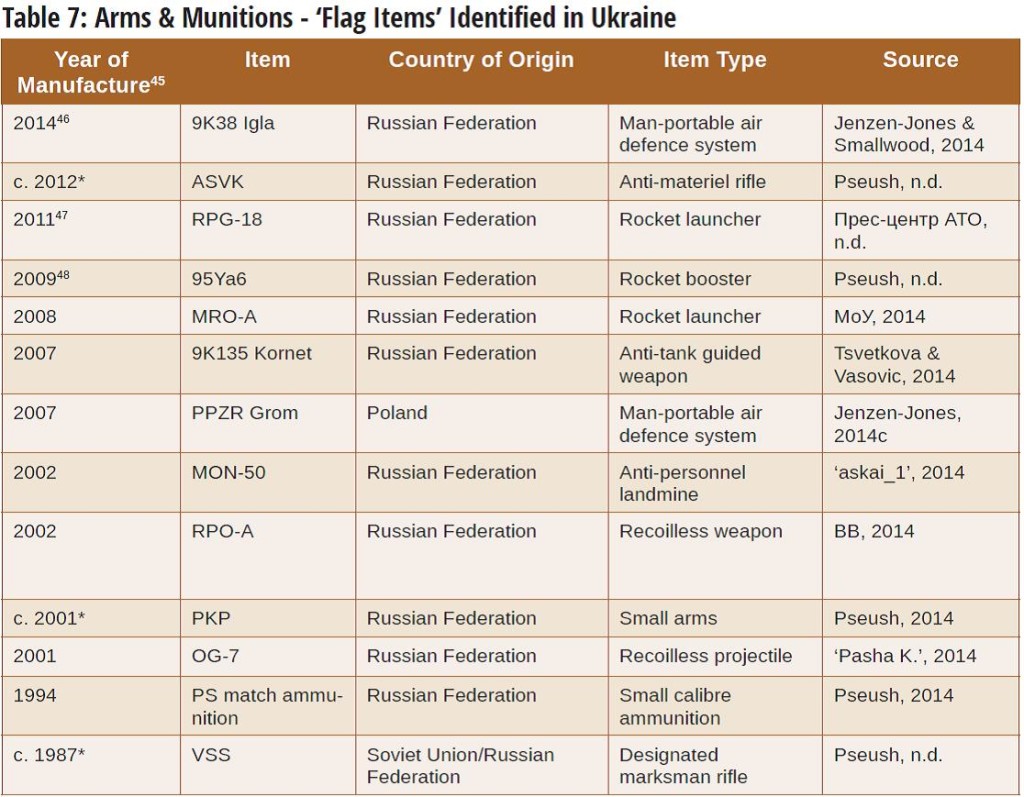 [Note: The recording of the 9K38 Igla as a Flag Item appears to be a mistake in the table as the Ukrainian Military is reported to also use this weapon system (as per page 52 of the report and confirmed by Wikipedia)].

[Note: The source article of Tsvetkova and Vasovic refers to the identification of a T72BM].

However what we are most interested in is the availability of these flag items to forces other than the Russian military. This information responds directly to the question of the supplier of these weapons to the separatist forces. The table below therefore reflects a summary of all items identified in the report as `Flag Items/unique weaponry of the separatists/Russian forces and the information provided in the report related to their availability to other forces.

Table : Summary of Russian weapons NOT used by Ukraine, and their international availability 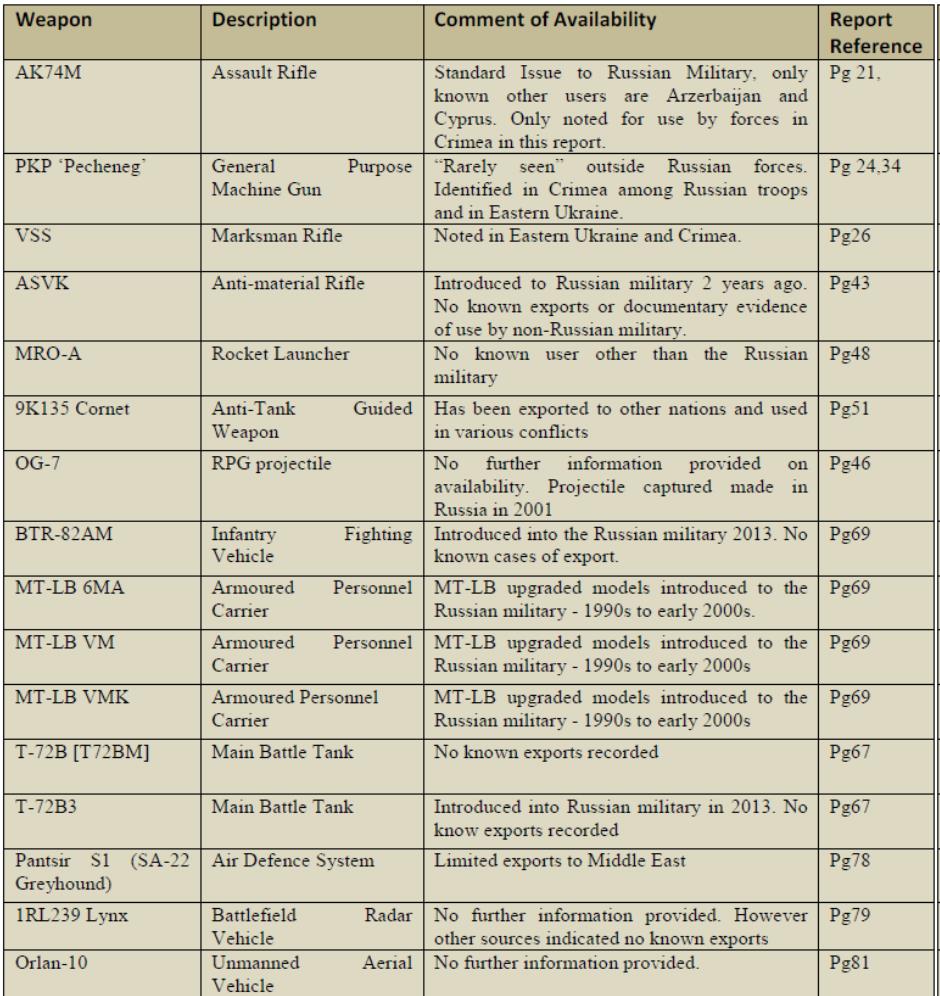 This table above shows that the majority of the equipment used by the separatist forces in Eastern Ukraine that is not in the armament of the Ukrainian military, has been recently introduced to the Russian military and has either never been exported or exported in such limited numbers/end users that it is highly unlikely that the equipment in Ukraine originates from any source other than directly from Russia.

An additional weapon identified which is not in service in the Ukraine is the Polish PPZR Grom E2 MANPAD. This weapon is reported to have had very limited exports. However it is reported to have been exported to Georgia in 2007, and quantities of the weapons captured by the Russian military during the 2008 war between Georgia and Russia. It is therefore highly probable (although not confirmed) that the MANPADS found in separatist hands in Eastern Ukraine are captured Georgian weapons and therefore also supplied from Russian stockpiles.

The report from ARES can be found here: