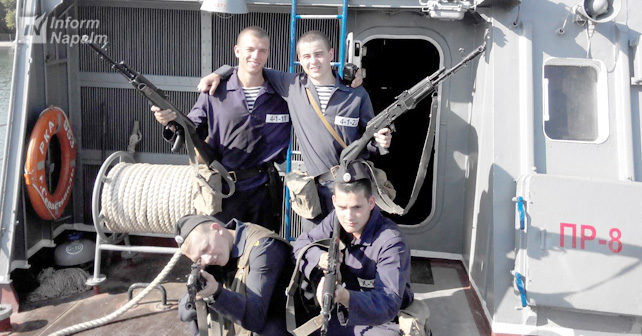 In its new OSINT investigation identifying Russian troops directly involved in the aggression against Ukraine in Crimea, InformNapalm international intelligence community has gathered new evidence against some naval sailors of the 41st Brigade of Missile Boats of the Black Sea Fleet of the Russian Federation. With regard to the results of this investigation, we are calling on the competent authorities of Ukraine with a request to supplement their data on Russian military aggression in Crimea and to carry out appropriate legal proceedings.

While researching open sources of information, we discovered on VK social network a page of Russian sailor Oleg Nikolayevich Yermakov, born in 1992.

He posted a photo of a medal for the occupation of Crimea and an award certificate to it.

The certificate indicates the number of the military unit in which Yermakov served when Russia launched its armed aggression against Ukraine in February 2014. Military unit 72165 is 41st Brigade of Missile Boats of the Russian Black Sea Fleet, stationed in Sevastopol city, temporarily occupied Crimea.

The Brigade consists of two squadrons: 166th Novorossiysk Guided Missile Corvette Squadron (166th GMCS) and 295th Sulino Missile Boat Squadron (295th MBS). The ships of both squadrons participated in the aggression against Ukraine and featured in OSINT investigations of InformNapalm.

On the following photo from Yermakov’s album taken on board of a boat, at a closer look, we can see an inscription on the lifebuoy which reads “РКА 953”.

“РКА” is the Russian abbreviation for “ракетный катер”, a missile boat. The numeral “953” is the hull number of the R-239 missile boat (12411 Molniya project, part of the Russian Black Sea Fleet since 1992, the boat’s permanent base is in temporarily occupied Sevastopol, Quarantine Bay). This boat is part of the 295th MBS of the 41st Brigade of Missile Boats of the Russian Black Sea Fleet. In 2018, the boat was given the name Naberezhnye Chelny.

We invite interested readers to compare the characteristic elements of the boat on the photo from Yermakov’s album and on other P-239 photos found online.

On the list of Yermakov’s friends, we found another subject for our investigation. This is Aleksandr Piskarev, born May 30, 1991 in the city of Ivanovo, Russian Federation. Awarded a medal For the Return of Crimea.

He is a member of the group called “41 Missile Boats Brigade” on VK social network. Has an album photo taken on board the R-239 missile moat.

Captain of the 3rd rank Aleksey Orlyapov, born on November 15, 1982, was the commanding officer of the R-239 missile boat during the special operation to seize the Crimea.

In the photo, Orlyapov is on the left.

Aleksey Orlyapov was born in Kemin city (formerly Bystrovka) in Kyrgyzstan, his parents lived and studied there. Judging by the data from the page of Nikolai Orlyapov (1, 2), the father of our suspect, he served in the Russian Black Sea Fleet, after the discharge he continued to serve in the Navy. So the Orlyapovs ended up in Crimea.

Aleksey Orlyapov participated in the Russian aggression against Georgia in 2008.

In winter of 2015, Aleksey Orlyapov had a rank of captain of the 2nd rank and held a position of the Chief of Staff of a missile boats task force.

And in 2018, he became the commander of the guided missile corvette Orekhovo-Zuevo (hull number 626, part of the 166th GMCS of 41st Brigade of Missile Boats of Russian Black Sea Fleet).

We also noticed that Aleksey Orlyapov was added to the database of the Myrotvorets Center, but as of April 8, 2020 only as the commanding officer of the GMC Orekhovo-Zuevo, without indicating data on his participation in the occupation of Crimea as the commanding officer of the R-239 missile boat. We call on the Myrotvorets center to update the information in its database in accordance with the results of this investigation.

On March 19, 2019 Aleksey Orlyapov was entered on the sanctions list of the National Security and Defense Council of Ukraine for a period of 3 years. However he is missing from the list (1, 2) of the Russian military commanders and Russian officials indicted by the Main Military Prosecutor’s Office of Ukraine. Also, the R-239 missile boat hasn’t been included on the list of the Military Prosecutor’s Office among the ships involved in the aggression against Ukraine. Therefore, based on the results of this investigation, volunteers of the InformNapalm international intelligence community call on the competent authorities of Ukraine to carry out all the necessary legal proceedings.

*If you are viewing this article in the Accelerated Mobile Page (AMP) mode, some of the links and pictures might not be displayed. If you are interested in the whole content of this page, we recommend viewing it on a PC or a laptop.