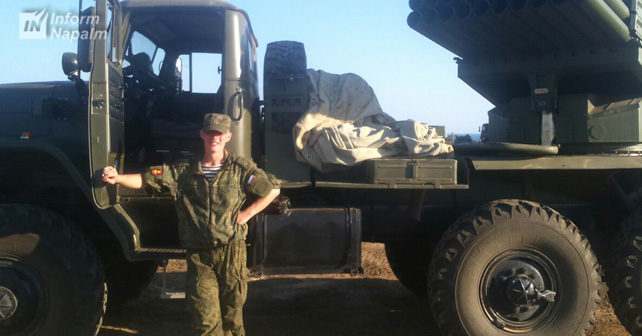 On the night of Monday, July 27, during to the celebration of the Russian Navy Day in the city of Severomorsk, a fragment from a festive fireworks hit the head of a Russian contract serviceman and seriously wounded him. Marine Dmitry Chemalin received a severe head injury: fractures of the jaw, temporal lobe and occiput, and also lost a lot of blood. The serviceman was a combat veteran and was awarded a military medal from the Russian President. Now the marine is in the Northern Fleet military hospital. He was in Severomorsk on an assignment. Military investigators have started inquiry into the incident. This is reported by the Russian media.

Volunteers of InformNapalm international community, using the information reported by the media, decided to check in which military conflicts Dmitry Chemalin participated. The volunteers analyzed his social media account and determined that he served with the Russian occupation forces in Crimea and also took part in a military operation in Syria. 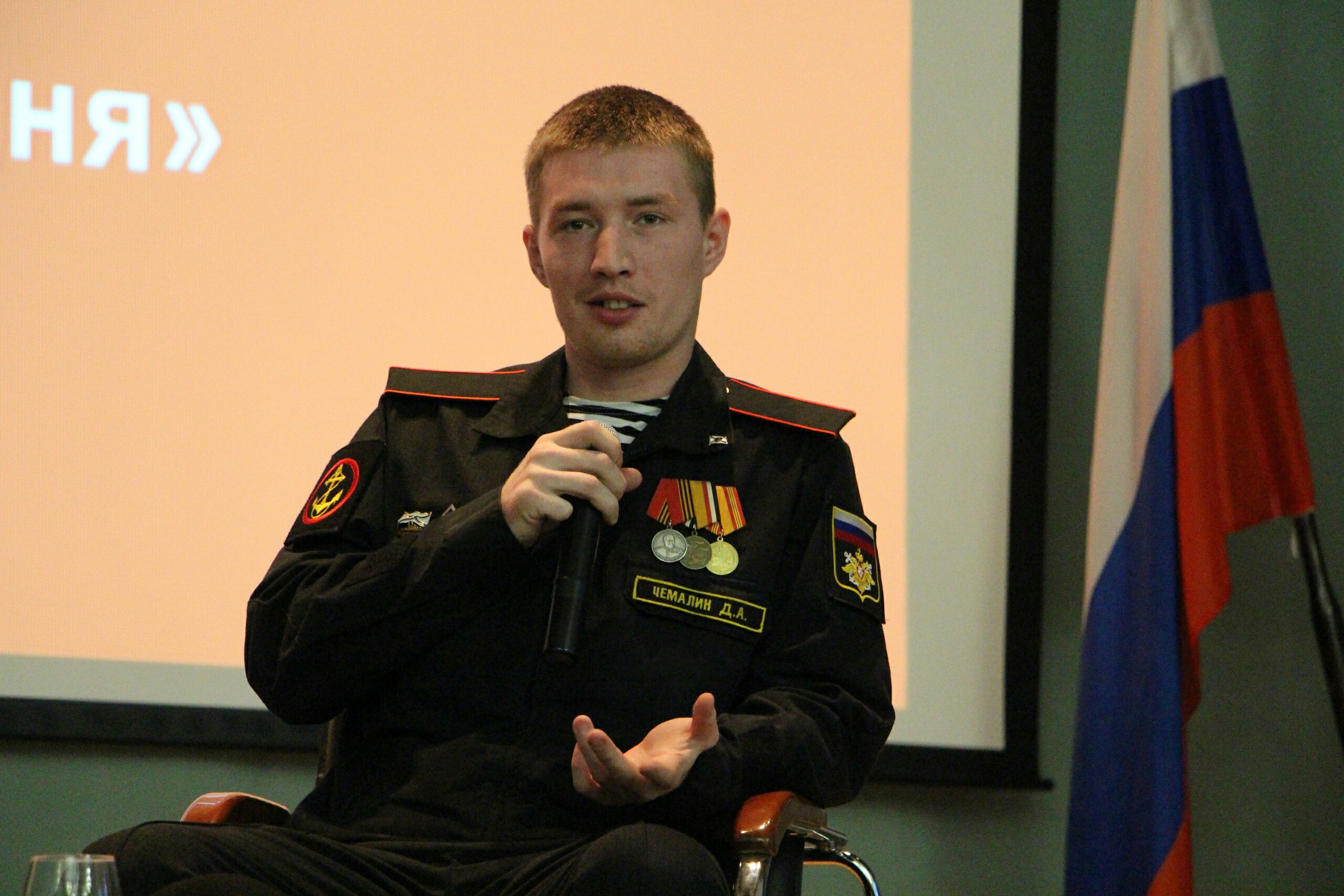 Personal information about the Russian serviceman

Dmitry Alexandrovich Chemalin was born on March 26, 1994 in the town of Syktyvkar, Komi Republic, Russian Federation.

In 2016, he served under a contract in occupied Crimea, in the 810th Separate Marine Brigade (military unit 13140, place of permanent deployment: Sevastopol). 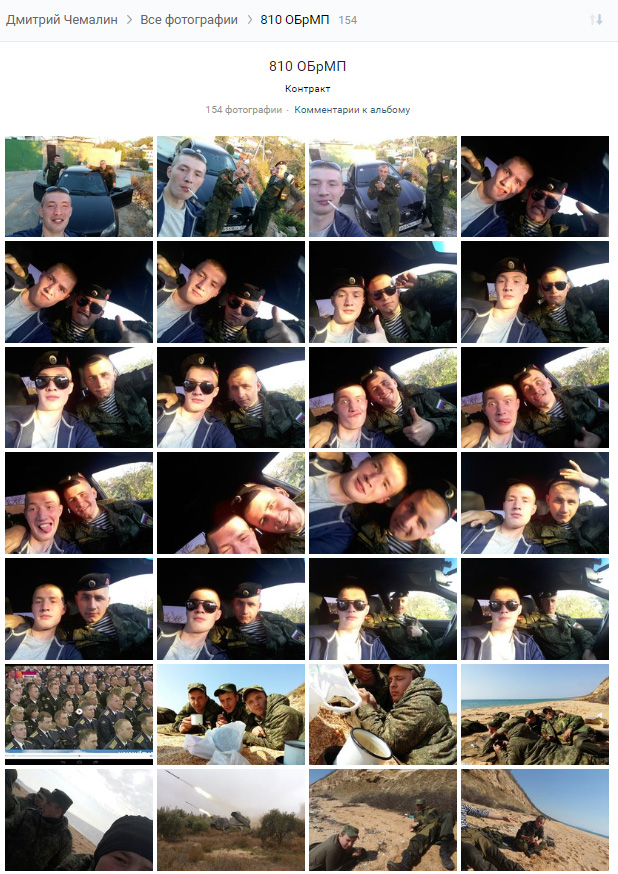 We will review some of these photographs in more details.

Here are photos of a Combat Participant Certificate and awards Certificates. He was awarded the Zhukov medal by the decree of the President of the Russian Federation, as well as the medal of the participant in the military operation in Syria, signed by the commander of the 810th Marine Brigade (military unit 13140), Colonel Dmitry Uskov who led the brigade from 2015 to 2019. 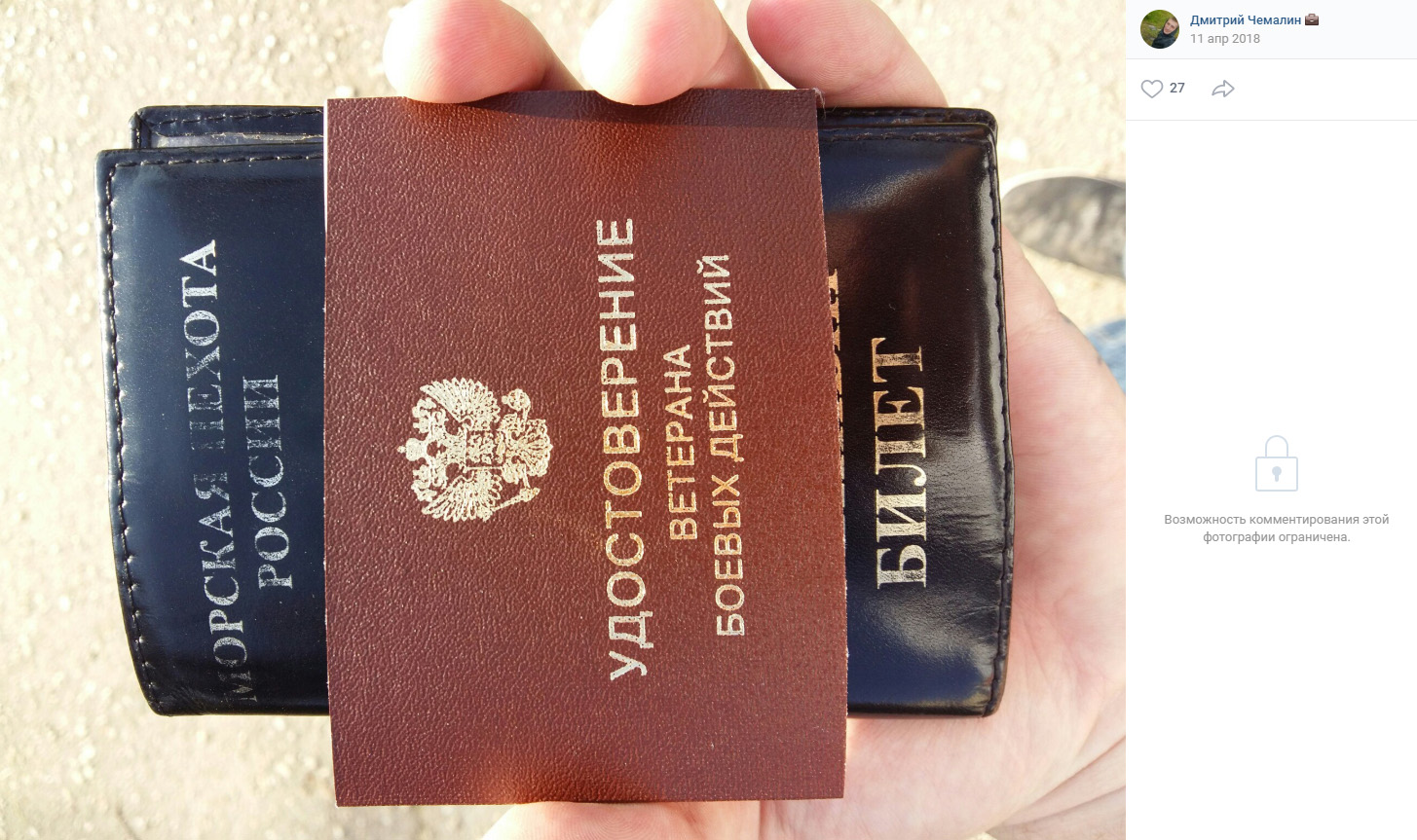 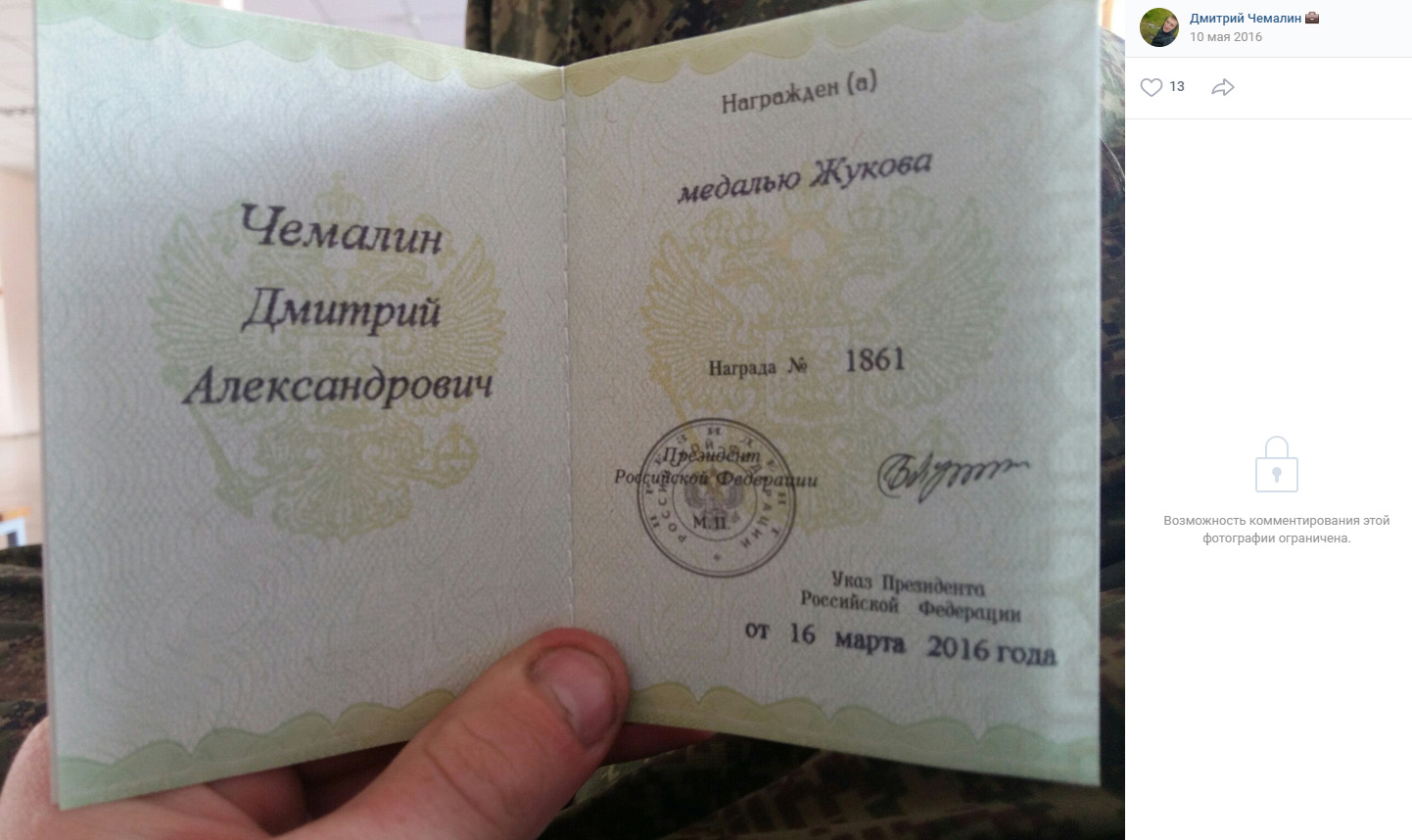 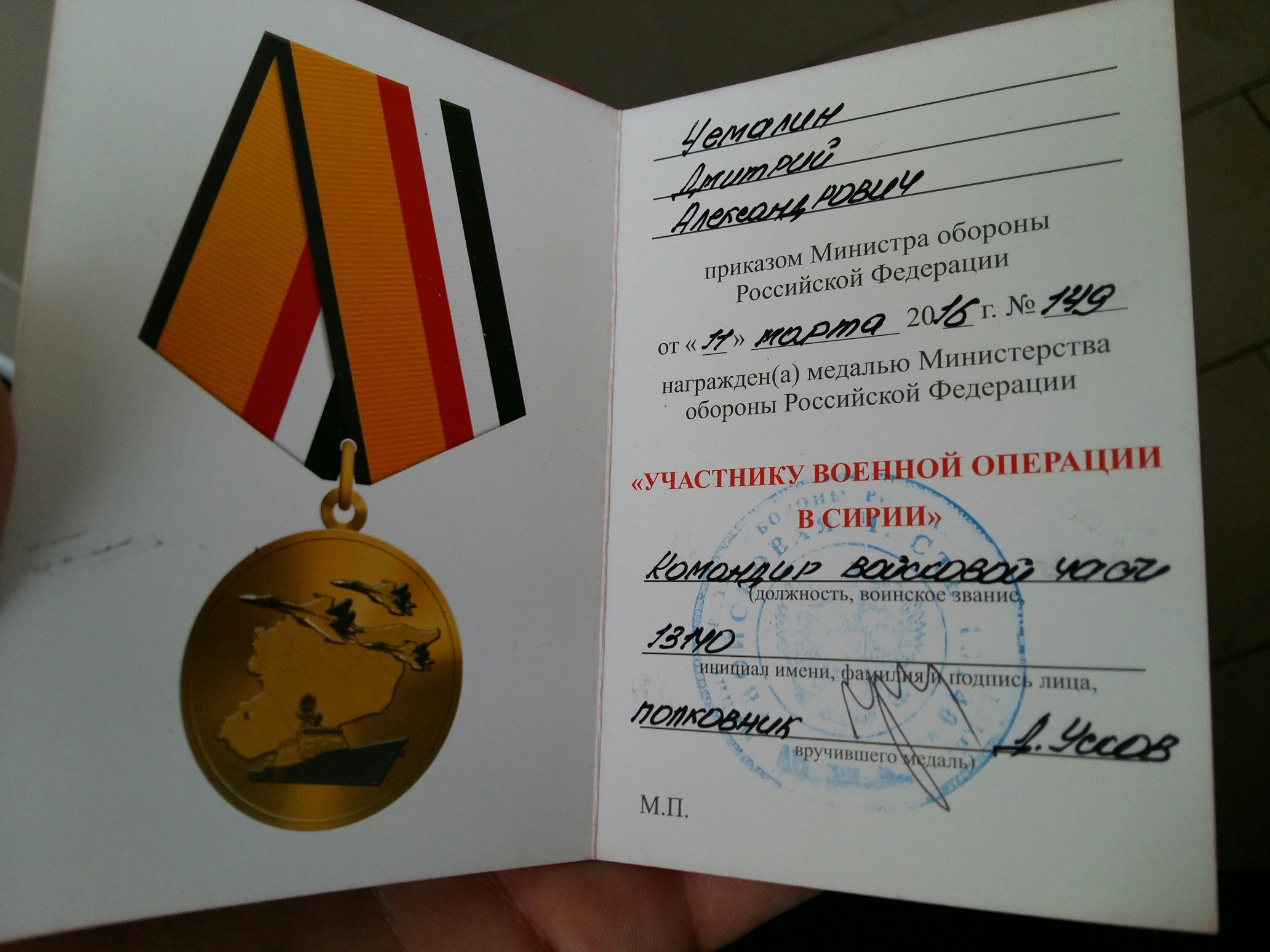 Also interesting are other photos from his account dedicated to military service and the occupation of Crimea. He uses the slogan of the Russian invaders “Crimea is Ours” and the hashtag «#Вежливые_Люди» (“#Polite People”) – the term used by Russian propaganda for Russian military personnel without identification marks, seizing infrastructure and government facilities in Crimea in 2014. 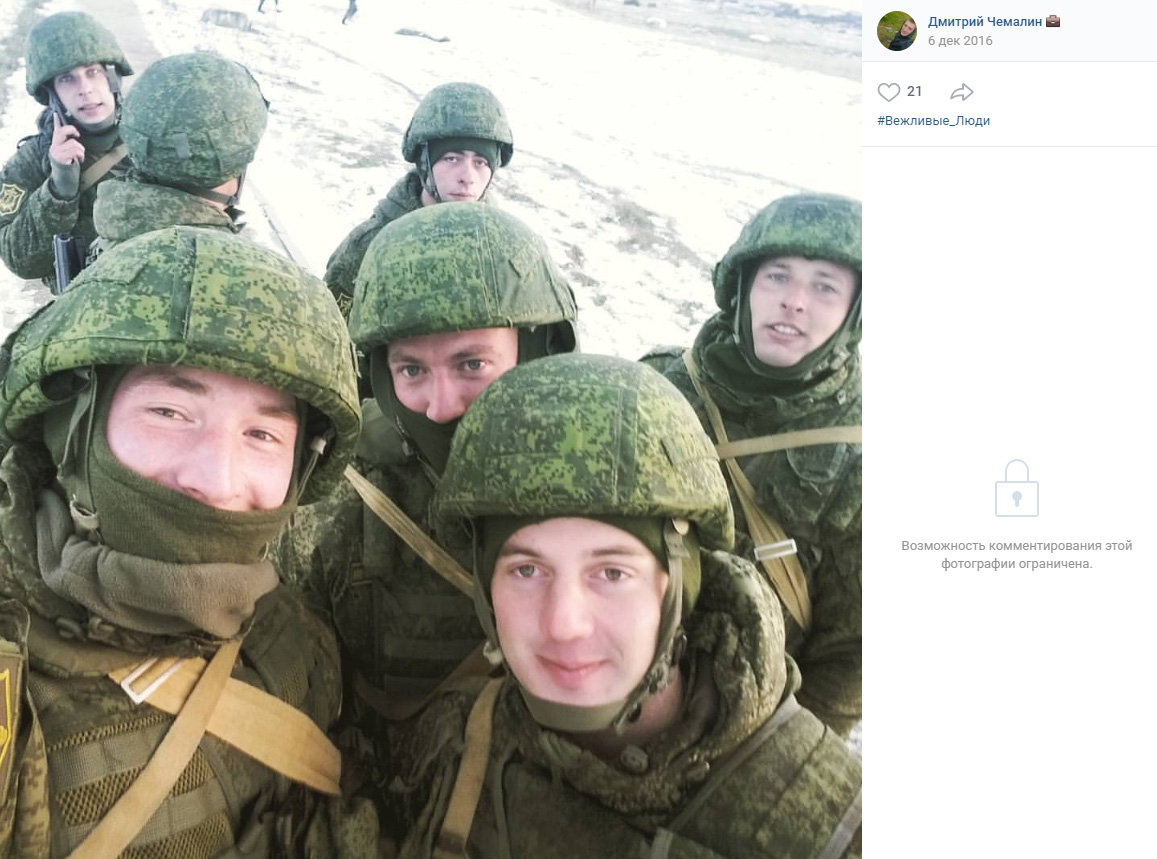 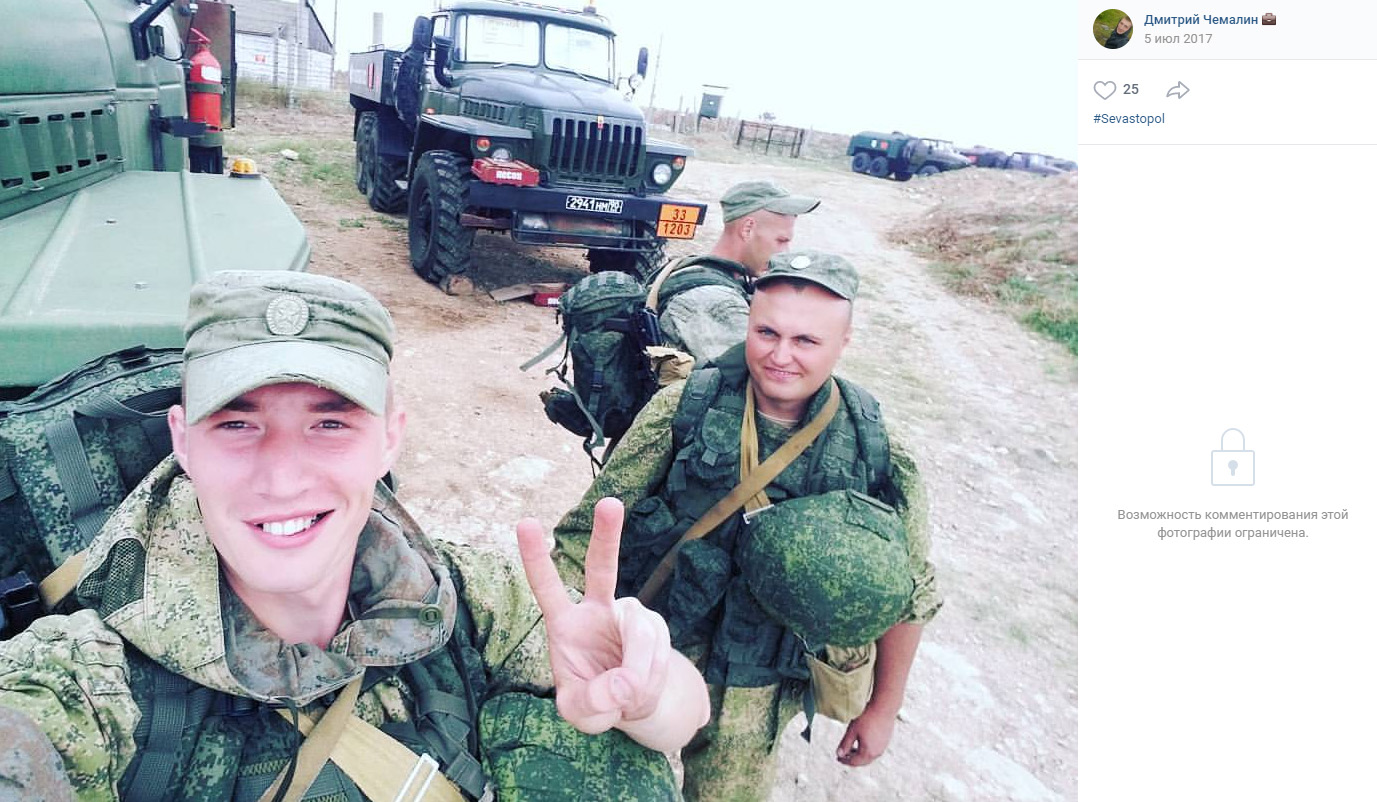 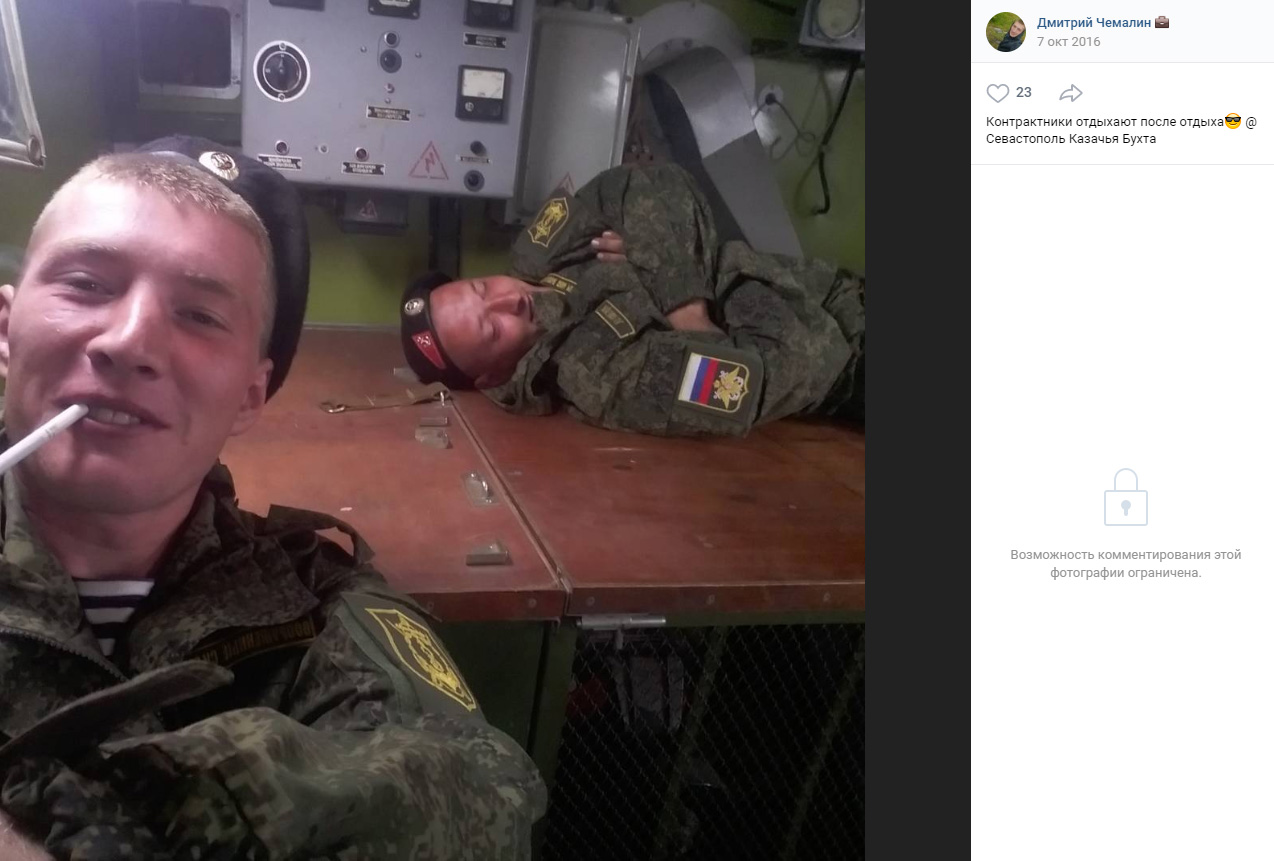 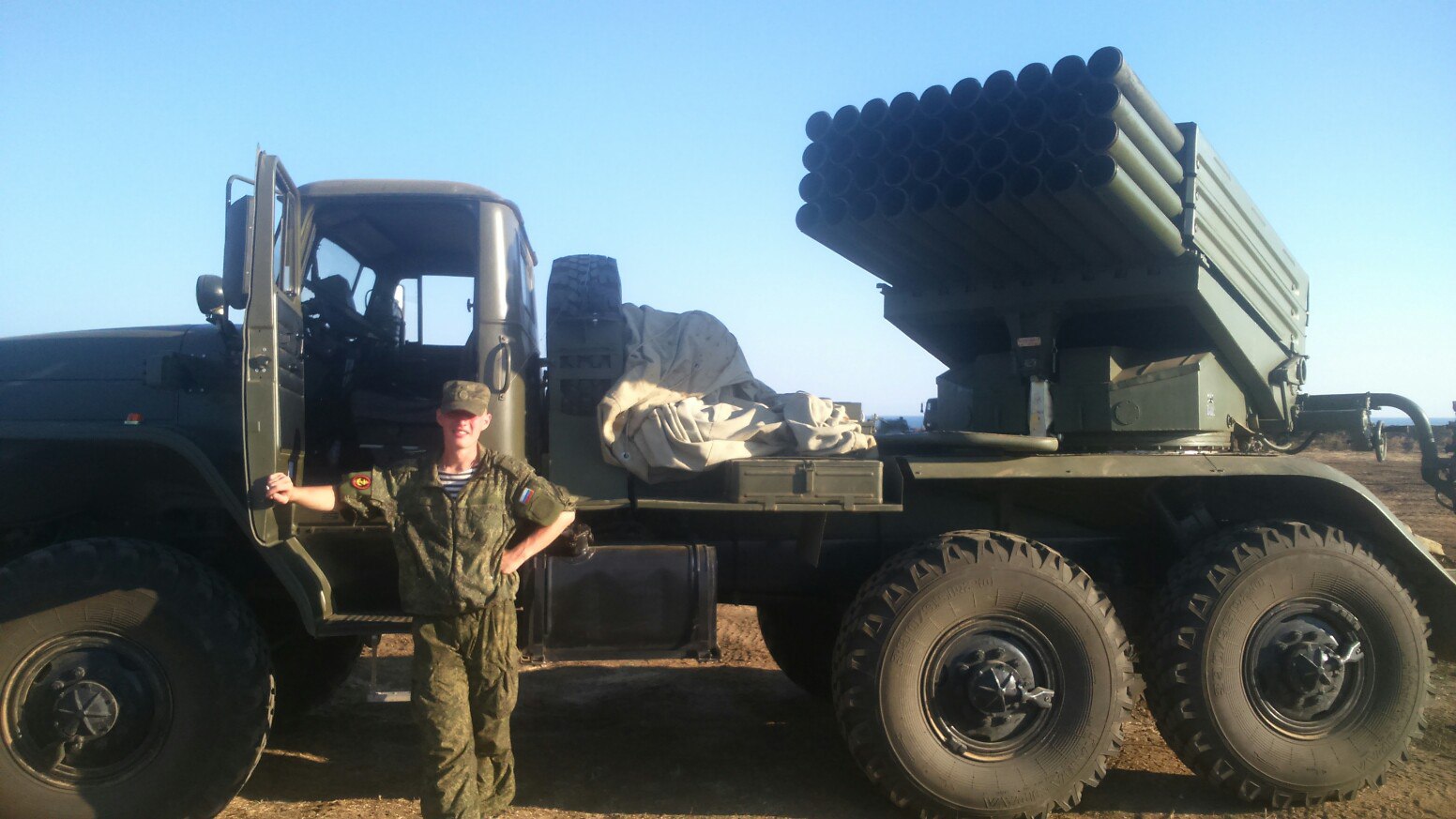 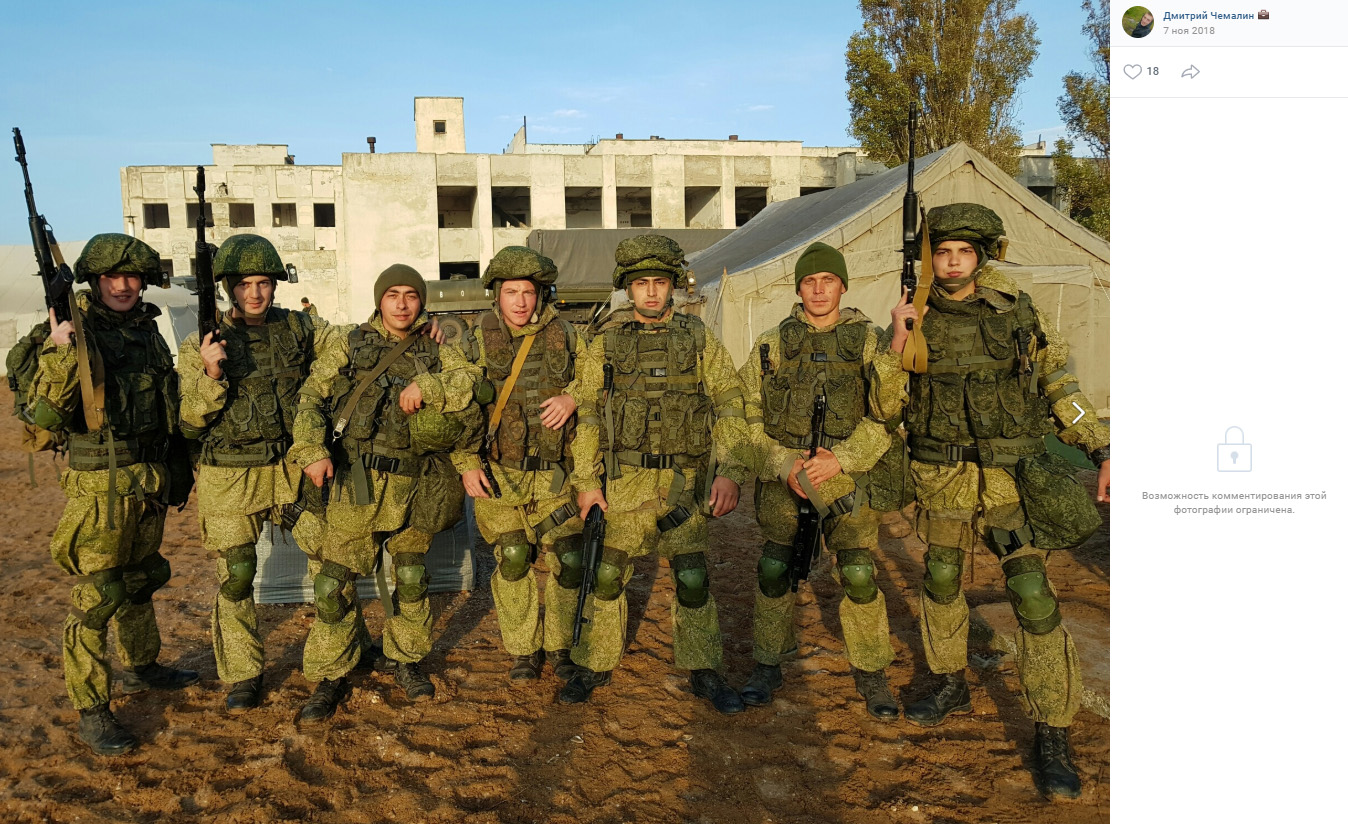 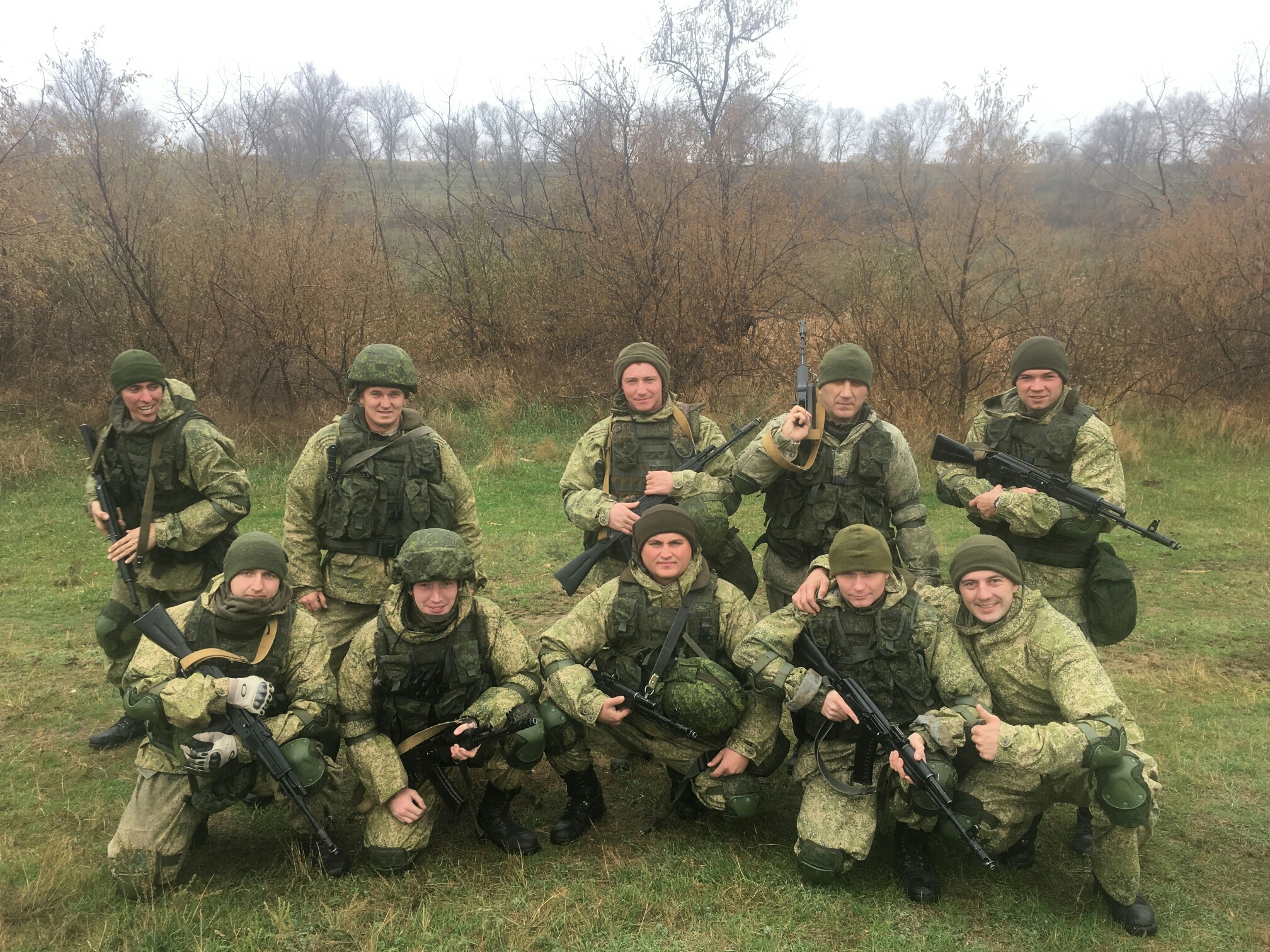 There is no direct information that Dmitry Chimalin, in addition to military service in Crimea and Syria, also participated in the war in the Donbas. But it is worth noting that InformNapalm international intelligence community in its investigations has recorded the participation of servicemen from the 810 Marine Brigade in the war against Ukraine in the occupied Donbas, and 33 servicemen of this brigade were identified as participants in the seizure of Crimea and in the war in Donbass. This information has been entered into the InformNapalm database.