Neo-nazis from St. Petersburg Are Fighting “Fascism” in Ukraine on a BTR-80 Armored Personnel Carrier

A group of medical workers has been sent from Russia to Ukraine. A column of vehicles, consisting of 7 cars with rather humble and pale red crosses was noticed back in November on the streets of Makiivka, Donetska Oblast of Ukraine. These vehicles are intended to be used for medical help to Russian servicemen and will provide no help to civilians, otherwise Russia would have deployed mobile hospitals from its Ministry of Emergency Situations and would boast about it using all the possible means.

However, the main point of our research was not the ambulance vehicles, but samples of Russian military equipment, which has been modernized. First, let us watch a strange online theatrical performance made by separatists, in which we were able to find additional information about invasion forces. We are especially interested in the video fragment, showing armored personnel carrier shooting.

And again, as in the case of modernized airborne combat vehicle in Donetsk, we see a new IR projector, installed under the main machine gun. Its height is bigger in the current vehicle modification (since it has a round shape from a side-view) and it is not so much prolated.

We managed to find the following interesting details:

Among the number of weapon samples presented at the exhibition of the 42nd Tagil division of Strategic Missile Troops, which was held on August 9, 2014 in Nizhni Tagil on the town’s 292nd anniversary, a modernized armored personnel carrier BTR-80 was presented to the public. Unlike the basic version of the vehicle, it has an improved fire control instrument, new radio transmitter and a number of other improvements. It is easy to recognize the BTR-80 from its view, when paying attention to a new rear site on the turret and to a new projector on the KPVT heavy machine gun’s barrel. However, the illustrative table wrongly names it BTR-70M for some reason.

As we see, another footprint of Russian presence in the Ukrainian ATO zone is rather fresh. It is so fresh that even specialists get confused. Taking into consideration weather conditions, the video was probably filmed in November—December 2014.

But how could you prove Russian audience that this video was made in Ukraine? Those people will find 1001 reasons why they should not trust us, that is why let us continue our investigation, which leads to the terrorist battalion ‘Rusich’ (or DShRG [Subversive assault surveillance group] ‘Rusich’), which is attached to the 4th battalion of the so called ‘Luhansk People’s Republic’ (Rapid Response Group ‘Batman’). Batman RRG was numerously mentioned in our publications, for example: Neo-Nazis from St. Petersburg on service for the “Luhansk People’s Republic” (publication is in Russian). 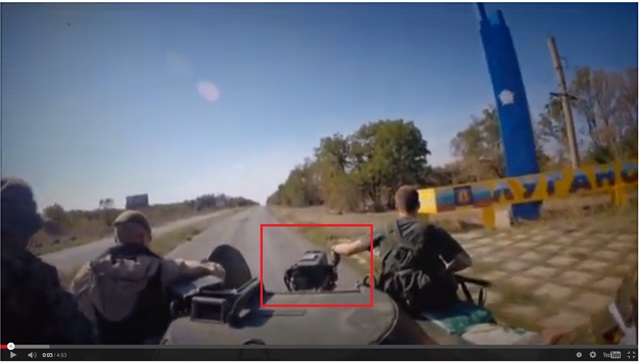 This screenshot of another nazi rock style performance shows us a new modification of Russian BTR-80 armored personnel carrier used in Ukraine.

Here we can see two samples of armored personnel carriers of this modification. The first video of those vehicles in Ukraine dates back to the end of August 2014. However, it is possible that they appeared even earlier. The picture clearly shows us a skewed shape of  the turret, which is typical of a newer versions of BTR-80 (both of ‘A’ and ‘AM’ versions). However, those vehicles use a 30-mm automatic cannon as their main weapon while Russian vehicles in Ukraine use 14.5-mm machine gun. It means these models are the latest modification of BTR-80.

The same vehicles could be spotted among the Russian invasion forces group concentrated on the Russia—Ukraine border.

However, Russian cynicism is not narrowed to blatant lies to international partners regarding the absence of the Russian equipment and servicemen of the Russian Army in Ukraine. Russian representatives numerously blame Ukrainian government in neo-Nazism, calling it the ‘Kyiv’s junta’. We would like to draw your attention to the radical nazi ideology of one of ‘Rusich’ units.

One of its commanders Aleksey Milchakov (nickname ‘Fritz’) is a citizen of Russia born in St. Petersburg. His colleagues have been identified as officers of the special service forces unit ‘Grom’ of the Russian Federal Drug Control Service. Neither they, nor Mr. Milchakov himself try to hide their commitment to the ideas of Adolf Hitler. 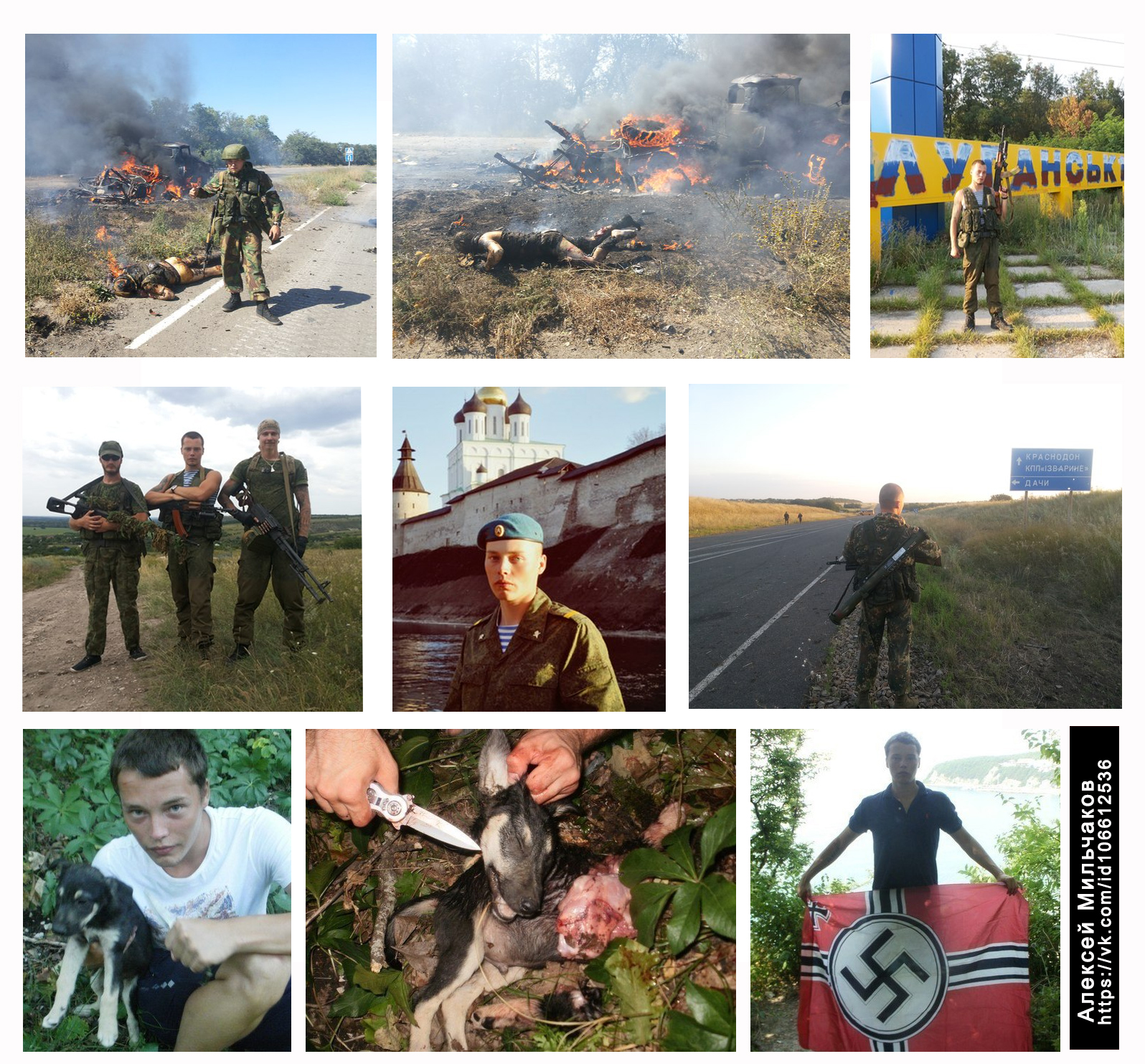 Moral values of Milchakov can be illustrated by his own photo descirption under the picture of killed puppy in VK social network: “Kill homeless, puppies and children! Run from mutts and hand over your colleagues…” Now this deranged Russian neo-Nazi and his accomplices terrorize people living in the Eastern oblasts of Ukraine. 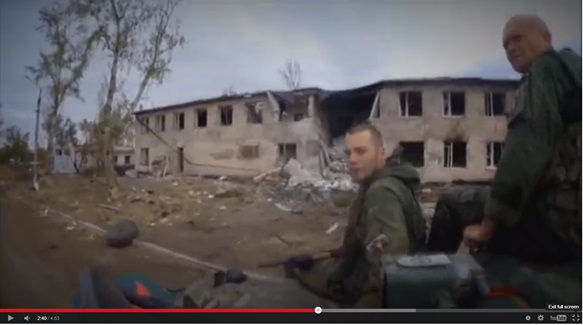 How could Russian Strategic Missile Troops and a Russian neo-nazi group, illegally fighting in Ukraine, have the same model of ultramodern Russian armored personnel carrier? There is an explanation: Mr. Milchakov and his gang are servicemen of the Russian army.

As it is known, the Head of the General Staff of the Ministry of Defence of Russia Valeriy Gerasimov said that all evidences of Russian involvement in the conflict, presented over the Internet, are “primitive graphic fakes”. We could answer such statements only with a new portion of humor. Kudos to Heorhiy Kliuchnyk for his another cartoon, drawn for ‘Valera’ from the Russian General Staff. 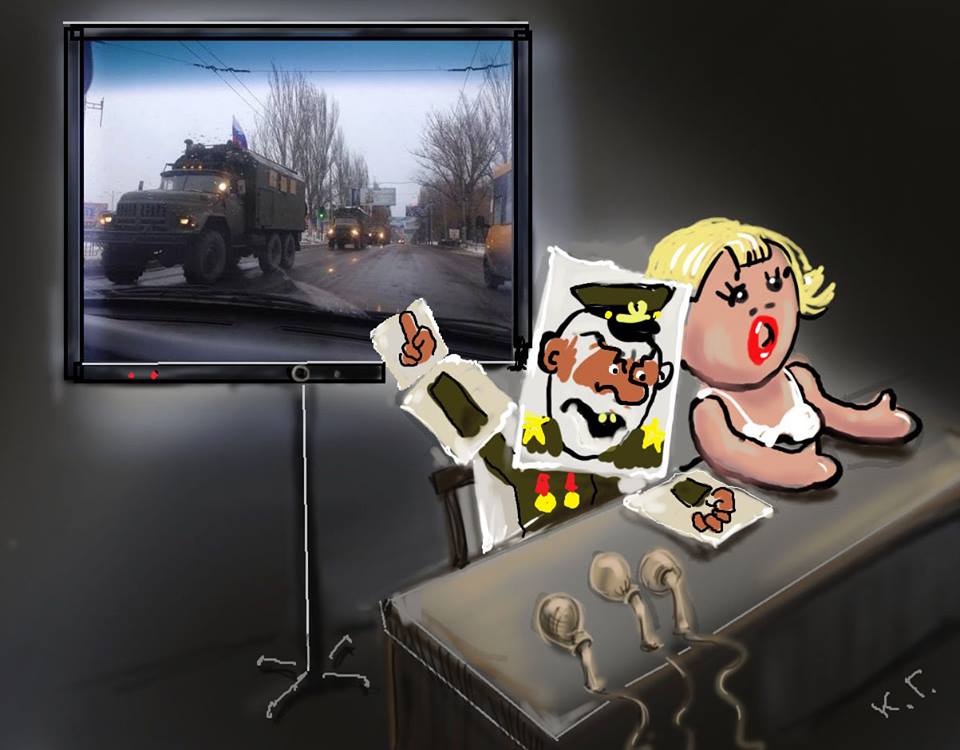 No Responses to “Neo-nazis from St. Petersburg Are Fighting “Fascism” in Ukraine on a BTR-80 Armored Personnel Carrier”