Russian Hmeimim Airbase in Syria Has Been Shelled (Video) 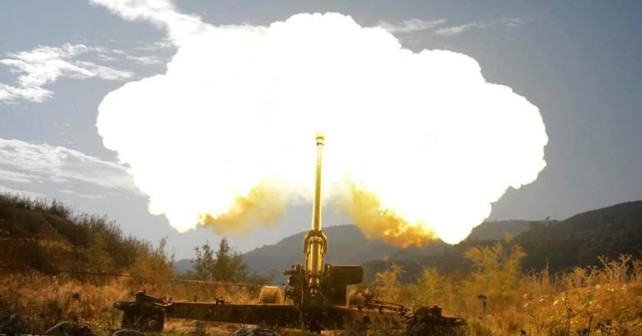 According to the Turkish Hurriyet newspaper, the Russian Hmeimim airbase located in the Syrian Latakia was shelled by Ahrar ash-Sham group on November 26. In the results of the shelling several Russian soldiers were killed and wounded. The sources also stated that none of Russian warplanes took off after artillery strike on the airbase.

The InformNapalm’s sources in Israel in their turn confirmed that there were a lot of wounded and several killed servicemen at the airbase (the exact number was not provided).

We have also found the video materials which supposedly show the shelling of the Russian military base conducted by the Harakat Ahrar ash-Sham al-Islamiyya group. It is known that the members of this group belong to the union of the Salafi brigades, which fight against the Assad’s government forces, Shabiha and Hezbollah militants. The ‘Islamic State’ terrorist organization together with the Russian Federation are also in the list of the enemies of these armed groups.


The revange for the death of Abu-Bakr Ash-Shishani, the leader of Ahrar ash-Sham, may be the reason for this attack on the Russian Hmeimim airbase in Syria. As you may recall, he was killed in the result of the airstrike on Homs province on October 14, 2015.

The Russians have not yet commented this information. It is possible that 24 hours of silence after the attack can be treated as an attempt to conceal the loss of troops in Hmeimim.