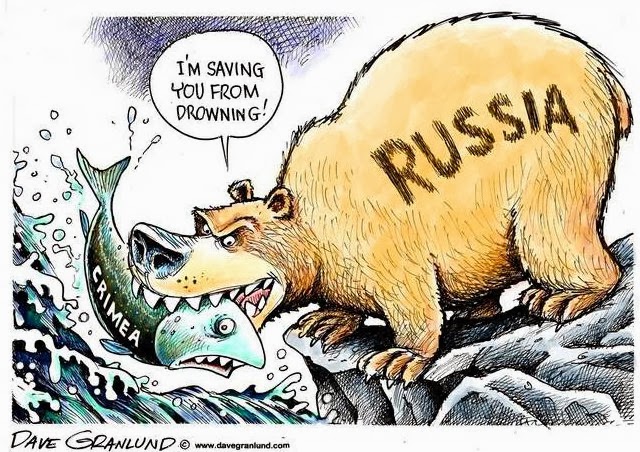 Putin: the new Kyiv government has non-legitimate origin, does not ensure stability and safety of the citizens of Ukraine, particularly otherwise-minded. It is impossible to support such a government.

Our reply: Russia provides military support to non-legitimately formed separative administration of Crimea, which does not ensure stability and safety of the citizens under control, particularly otherwise-minded…

Medvedev: If Yanukovich commited crimes, people should bring an action against him in court, not to make revolution.

Our reply: If revolution was unlawful, let Yanukovych immediately come to Kyiv and bring an action against revolutionists, rather than to invite Russian troops.

Putin: Russian-speaking population of Ukraine is in danger due to actions of the new Kyiv government.

Our reply: Decision to bring Russian troops in Ukraine may lead to war and to deaths of hundreds thousand citizens of Russia and Ukraine.

Putin: Unknown extremists occupied governmental bodies of the Autonomic Republic Crimea, thus giving grounds for response from the side of Russia.

Our reply: these «unknown extremists» hold governmental premises till now. They hung out flag of Russian Federation, and are of no difference with «detachments of People’s self-defense», which came to Crimea from Russia. Besides, they wear Russian military regimentals, possess Russian armament, travel on Russian troop transport, and are dislocated in the military units of the Black Sea Fleet of the Russian Federation in Crimea. Along with Russia, these «unknown extremists» contribute to activities of the separative administration of Crimea.

Putin: Russian troops in Crimea, along with detachments of People’s self-defense, are protecting civil population and supporting their safety.

Our reply: Russian troops in Crimea, along with «detachments of People’s self-defense», represent a danger to lives and health of personnel of the Ukrainian military units as well as their families, provoke military personnel to use their weapons, intensify inter-ethnic and political animosity in Crimea, constraint the right of citizens on free travelling.

Churkin: Our demand is that the new Kyiv authority should return to status quo as of 21 February, when, being in opposition, it concluded an agreement with Yanukovych about holding President’s elections in December 2014.

Our reply: Will in this case situation in Crimea and Sevastopol return to status quo as of 21 February? Will so-called «Premier of Autonomic Republic Crimea» S.Aksenov and so-called «Sevastopol Mayor» O.Chalyi give up powers and positions they captured in an illegal manner? Will occupation Russian troops withdraw from the territory of Ukraine? Will separative illegal armed units be disbanded?